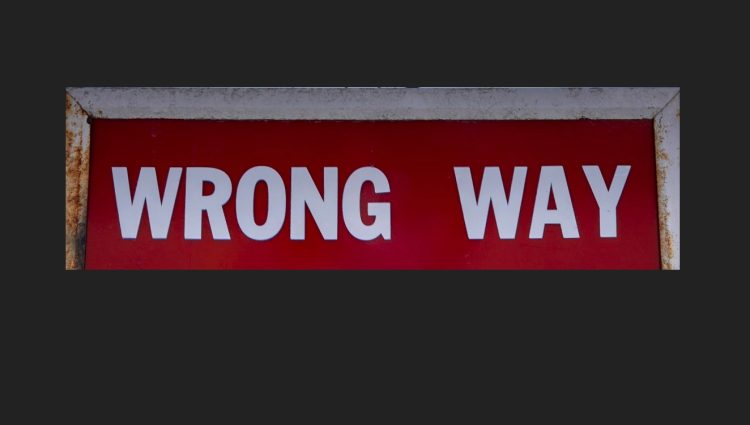 Detail from photo by Kind and Curious on Unsplash

What a legacy: floods, disaster management failures, and no duty of care for children’s futures

Introduction by Croakey: Leaders in emergency management have castigated the Morrison Government for failing to prepare for dangerous flooding in Queensland and New South Wales, citing evidence the Government was warned last October of the threat (read their statement in full below).

In some senses, this is nothing new. This Government and others have been warned for decades of the risks of catastrophic climate change, but in Australia at least too many political leaders have been able to get away with ignoring and even deriding these concerns.

However, as the impacts of climate disruption become more evident in peoples’ lives, the political costs of inaction and maladaptation also become more evident. Will Environment Minister Sussan Ley come to regret her decision to appeal a Federal Court ruling last year that she had a duty of care to protect children and the environment from the harmful impacts of climate change?

Today’s ruling by the Federal Court full bench, upholding the Minister’s appeal, is not a good look for the Government, especially this close to an election where concerns about the climate crisis have been catapulted to political centre stage.

As medical leader Professor Nick Talley suggests in the tweet below, the Minister’s appeal raises uncomfortable questions for the Government. 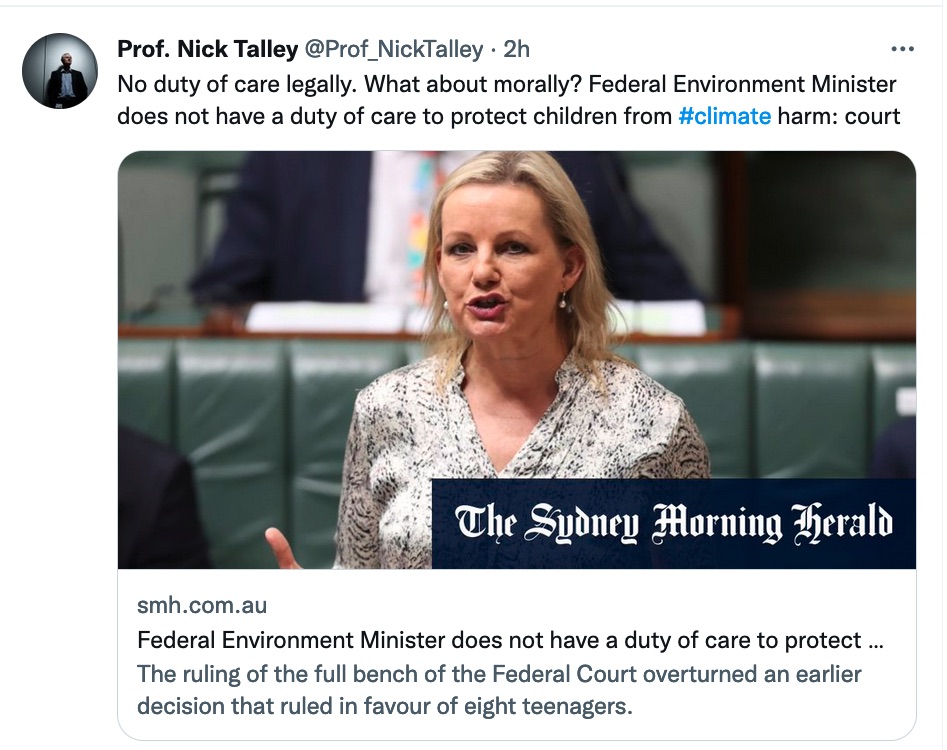 A group of Australia’s highest ranking, former emergency service chiefs have issued a scathing statement on the Morrison Government’s failure to prepare for and help alleviate the horrific impacts of the flooding disaster.

Emergency Leaders for Climate Action (ELCA) launched the statement in Brisbane yesterday, citing evidence that the Government was warned ahead of the 2022 floods and did little. The handling of this disaster echoes the lack of national preparation in the lead up to the Black Summer bushfires when the Government ignored warnings months before the disastrous fires hit.

“The Federal Government’s fumbling of this flood disaster is Black Summer all over again. Last October, charity leaders met with the Federal Government and were warned of massive flooding this summer. The Government knew what was coming and it did not adequately prepare our communities or first responders.

Time and again this Government fails to listen to expert advice. There are 80 recommendations of the Royal Commission into National Natural Disaster Arrangements gathering dust. The Government has failed to implement them.

Our elected leaders in Canberra are failing communities right around the country impacted by this disaster, and the thousands of emergency service volunteers and professionals who willingly place their own lives in danger by responding to increasingly frequent and dangerous climate-fuelled disasters.

Those of us who do hold hoses know just how dangerous climate change has become. Australia is under-prepared, and Canberra has no answers to how it will rapidly slash emissions this decade.”

We are all in danger: Lee Johnson

These climate-fuelled changes led to the fire and rescue service introducing swift-water rescue capabilities under my watch. I remember in that first year we conducted over 100 water rescues of people in serious trouble.

In the lead up to these floods even more water was dumped on Queensland than in the lead up to the 2011 disaster – something I thought I’d never see, but the records keep tumbling. This is climate change in action and we’re all in danger.” 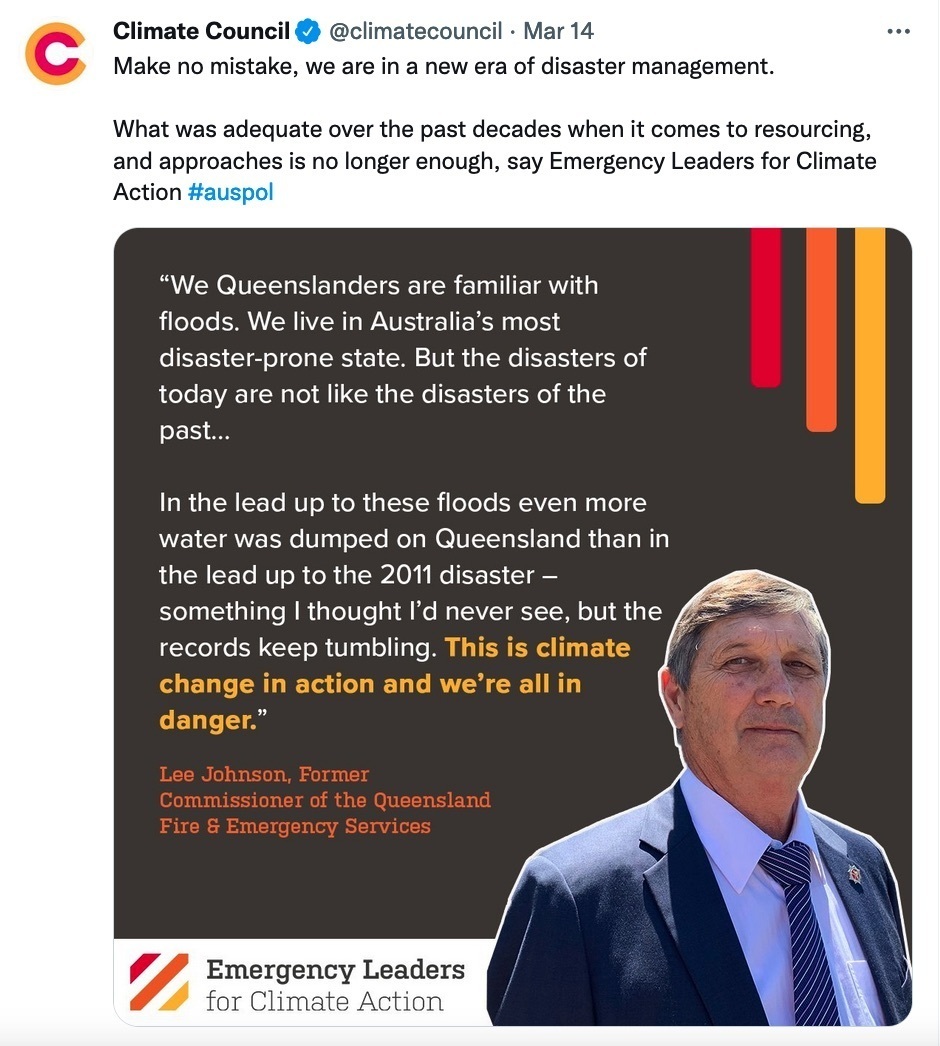 “This disaster’s shown us that we can’t continue with business as usual. Bandying about terms like ‘one-in-500 year’ flood is meaningless to people who are experiencing such disasters repeatedly. Above all else, we need the Federal Government to take climate change seriously by cutting back drastically on the mining and burning of fossil fuels.

We also need to reset the way we manage disasters, with spending between mitigation versus relief and recovery completely out of kilter. There is no more manageable hazard in Australia than flooding: we know where it will occur, we’re usually warned ahead of it and we can predict what its effects will be. We’re just not managing this risk well, and it hurts us over and over again to a greater extent than it should.”

“I know what it’s like to so helplessly witness my community torn apart by a disaster. During Black Summer the fires ripped through Lake Conjola and soon after, we were dealing with a flood. We had no support. We were left to pick up the pieces ourselves.

Communities are once again being left behind and it’s clear the lessons of Black Summer have not been learned. I was among the chorus of voices who in 2019 warned the Morrison government that a severe fire season was coming. And we were ignored.

More than two years after Black Summer and many Australians are still living in tents. Are the victims of these floods to expect the same? As climate change escalates these disasters, history cannot continue to repeat itself. And we can’t expect the ADF to carry the load.

The common denominator is the feeling of abandonment and lack of Federal Government preparedness to respond to these increasingly fierce disasters and address climate change at its root cause: the extraction and burning of fossil fuels.” 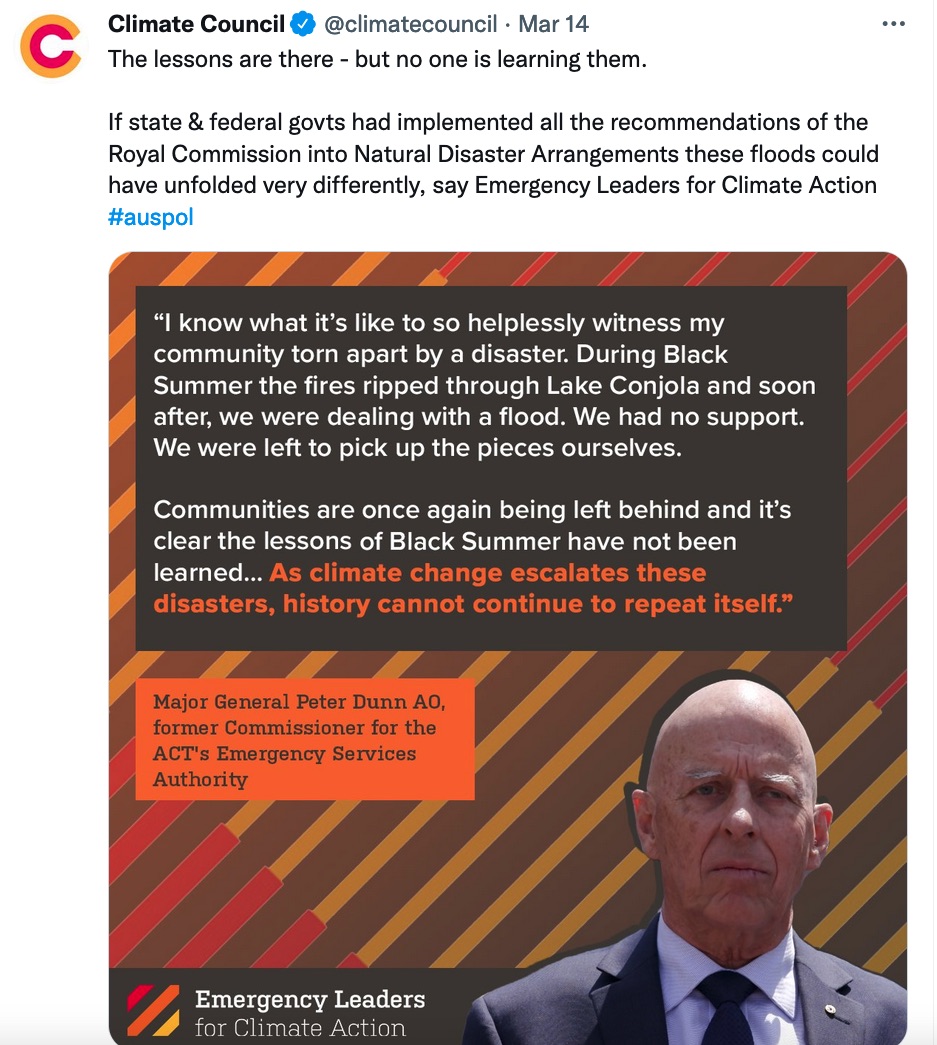 Emergency Leaders for Climate Action is a coalition of 37 former fire and emergency service chiefs from every fire service in Australia, a number of State Emergency Services, national parks and forestry agencies, and former Directors General of Emergency Management Australia. ELCA members are deeply concerned about worsening extreme weather directly resulting from climate change, and the risks to our safety and security. 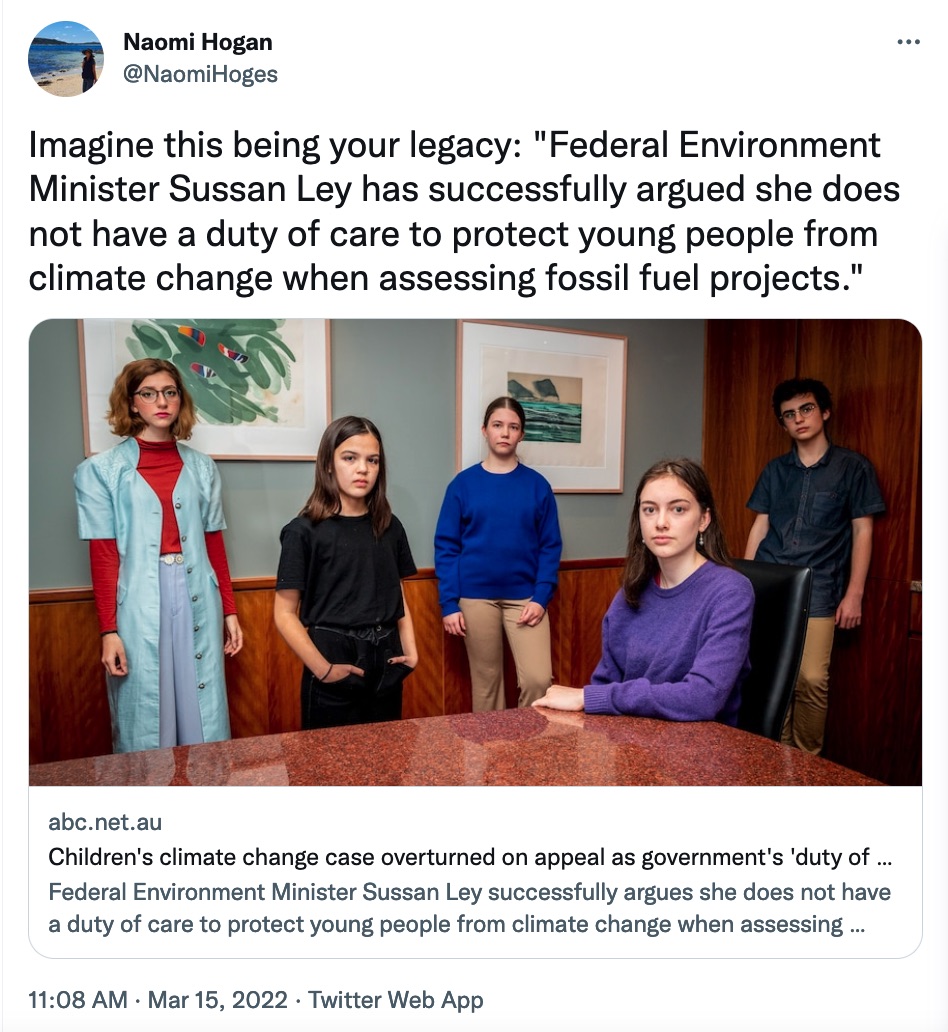 See Croakey’s archive of stories on the recent floods in Queensland and New South Wales.