Home The Croakey Archives Elections and Budgets 2013 – 2019 Federal Election 2013 What a shambles: does the Abbott Government know what it’s doing on Indigenous health?

What a shambles: does the Abbott Government know what it’s doing on Indigenous health?

So many questions were left unanswered during the election campaign about the Coalition’s plans for health policy.

The situation remains as clear as mud when it comes to Aboriginal and Torres Strait Islander health, with no definitive news on whether it remains within the Department of Health or is being transferred to the Department of Prime Minister and Cabinet.

The administrative arrangements released yesterday do not show Indigenous health listed under matters dealt with by the Department of Health.

“Commonwealth Aboriginal and Torres Strait Islander policy, programmes and service delivery” are listed as one of the matters dealt with by PM&C, along with Native Title, promotion of reconciliation, and the Stronger Futures Act for the NT.

However, it is not spelt out in this document if PM&C will have oversight of Indigenous health matters.

Government statements are not adding to any clarity.

Perhaps this is just what happens when political parties don’t bother consulting widely or taking a formal policy to the election: shambles.

Indigenous health needs, and deserves, so much better than this unpromising start.

For the record, these are the items listed as Health Department responsibilities: 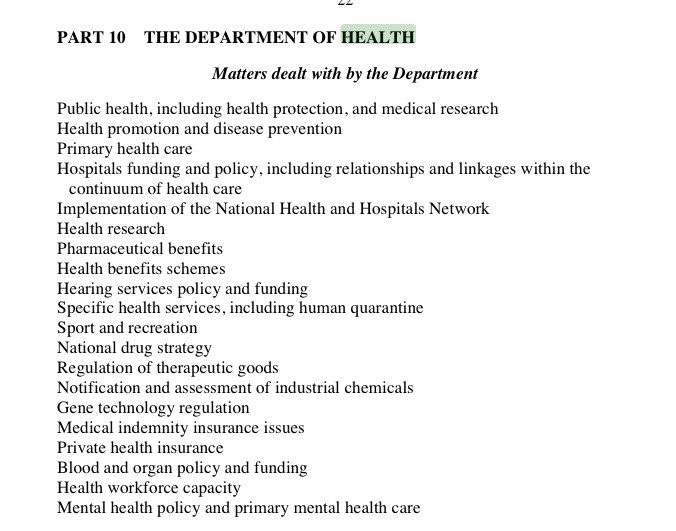 Meanwhile, this latest NACCHO Communique quoting the incoming chair of the new Indigenous advisory council, Warren Mundine, suggests we will know more in another week or so….