Home #QldVotesHealth What are public health priorities for the Queensland election — and what’s missing out? 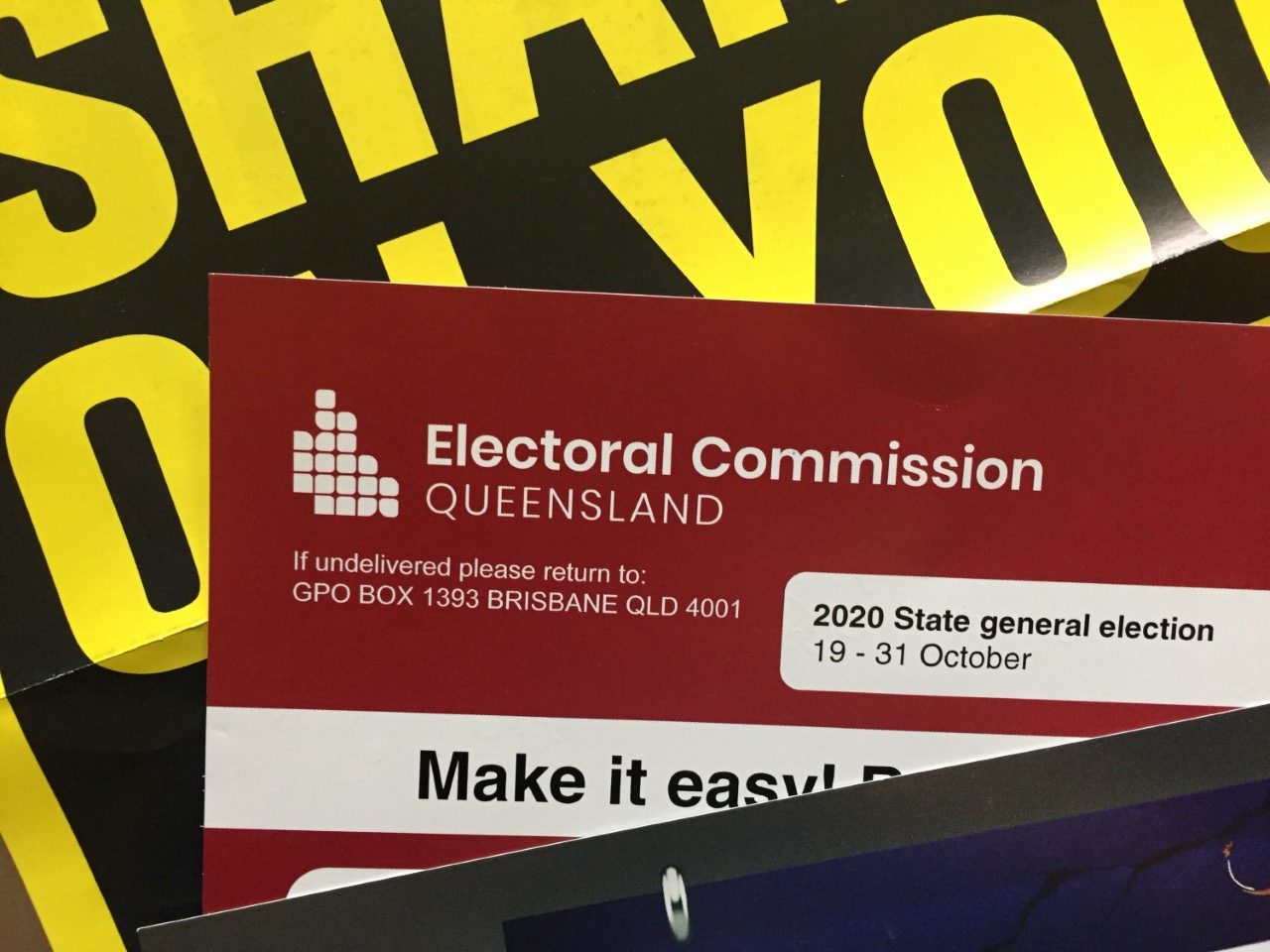 Queenslanders have until Saturday 31 October to vote for their next State Government. Photo: Letitia Del Fabbro

What are public health priorities for the Queensland election — and what’s missing out?

As this article at The Conversation outlines, Queensland is heading to its October 31 election, dealing with its fair share of local issues and also grappling with policy questions that resonate around the country.

These include how to recover from the health, economic and social impact of the coronavirus pandemic, and the critical need to tackle climate change in a state which comes under such pressure from fossil fuel industries and priorities.

The ABC reported on Thursday that Clive Palmer’s private company Mineralogy had donated a further $1.7 million to his United Australia Party, bringing the company’s total contribution to the party’s campaign since early September to $3.77 million — more than the declared donations over the same period for both the LNP and Labor combined.

The campaign also this week saw the Opposition Liberal National Party slammed for, as the Greens described it, “racist dog whistling” in its plan to impose a curfew for young people in Townsville and Cairns.

The Queensland Branch of the Public Health Association of Australia will highlight and examine these and other critical issues facing Queenslanders in a series of #QldVotesHealth articles for Croakey over the next week.

The first, below, by Letitia Del Fabbro, provides an overall look at the state of play of the election, including high rates of pre-voting, and other key issues to watch including public health funding and workforce support, social housing, Aboriginal and Torres Strait Islander health and justice issues, abortion law, and assisted dying reform proposals.

The polling booths for the Queensland state election have been open for five days and many people have voted already (including more than 100,000 people on the first day of pre-poll voting).

Queenslanders have until October 31 to cast their ballots.

It is a unique poll in several ways.

Firstly, it will mark the first government in Queensland to be elected for a fixed four-year term, following the 2016 referendum.

Secondly, the election is being held in the midst of the coronavirus pandemic, where strict border closures are contributing to economic uncertainty and present a barrier to service access.

The incumbent Palaszczuk  government was elected in February 2015 and it currently holds a two-seat majority.  In this election there are several seats in play with the seats of Gaven, Pumicestone and Maryborough up for grabs.

Due to the COVID-19 pandemic, health is at the forefront of people’s minds and there’s no doubt that the election outcome will influence policy and resourcing of public health and health services.

Thus far Queensland has achieved great outcomes in the management of the COVID-19 pandemic, the message of ‘keeping Queenslanders safe’ has resounded, however there have also been criticisms of the tight border controls with vocal opponents, as well as understandable disquiet from struggling tourism and service sectors.

Other than in relation to COVID-19, public health policies have not featured in the media in the lead up to this election.

We heard some calls for Quexit! following the 2019 federal election, when Queensland seats were crucial in returning the Coalition Government to power.

But, as a recent piece in The Conversation points out, ‘there is more than one Queensland’.

There is the Queensland that comes together in large numbers to rally and support action on climate change, while in the north of the state pro-coal rallies are held.

So far in this election that means that, despite Queensland having borne the brunt of climate change impacts including hazardous bushfires and devastating floods over recent decades, and devastating bushfires last year, climate action is not the critical issue it should be in the election campaign.

That’s a failure that will be explored further in an upcoming #QldVotesHealth article.

So too will be deep concerns about the plan by Opposition Leader Deb Frecklington, if the Liberal National Party wins government, to trial a curfew for children in Townsville and Cairns.

Like many Aboriginal and Torres Strait Islander health and community leaders (see tweets below), the Greens slammed the policy announcement as a “racist dog whistle”, while Amnesty International said curfews “stigmatise, victimise and criminalise”.

This worrying measure, previously mooted in 2017, is likely to target and further marginalise young people who already face disadvantage and should be scrutinised and critiqued by voters for its breaches of the United Nations Convention on the Rights of the Child 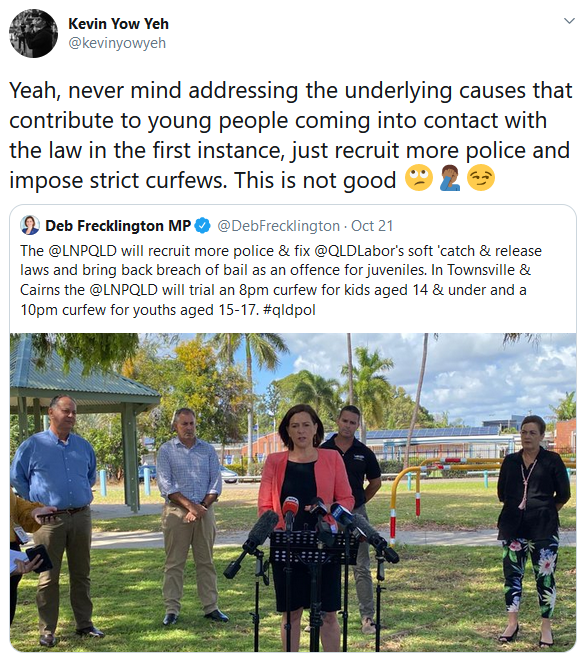 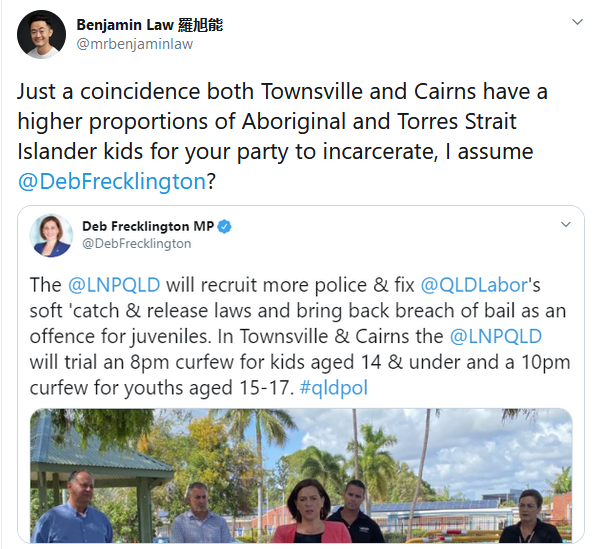 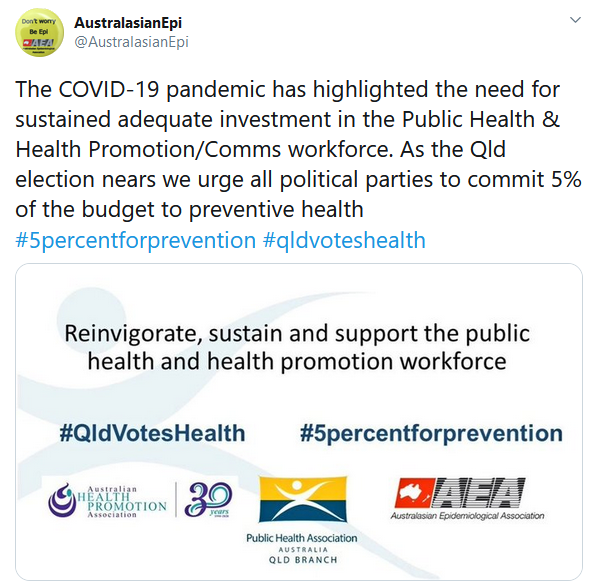 A number of other organisations have developed position statements that resonate with good public health policy principles: 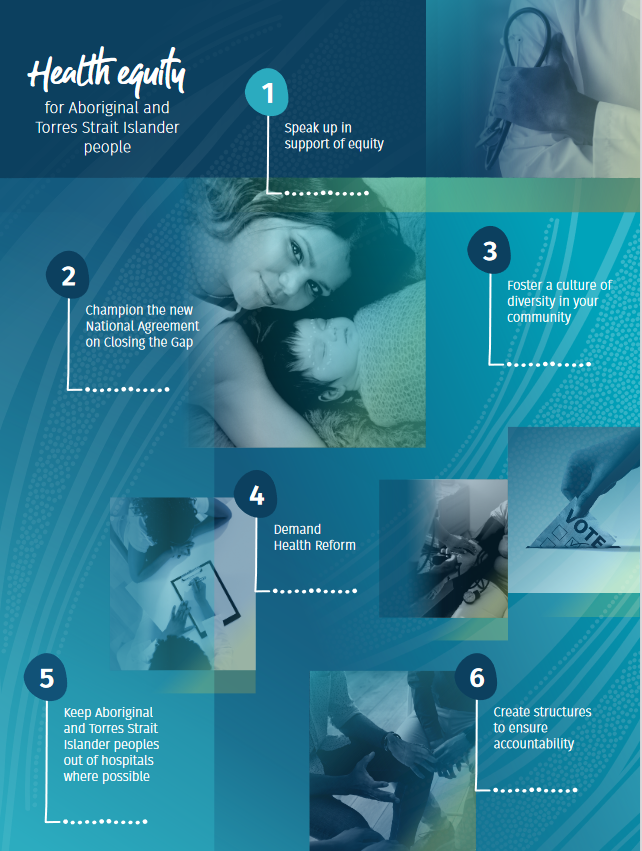 Queensland currently has the highest rate of unemployment in Australia and this is emerging as a key concern for voters who face uncertainty as Job Keeper payments come to an end.

Another significant area of concern, not least because it is not being widely talked about, is the news that Frecklington is also intending to review and possibly wind back Labor’s 2018 abortion decriminalisation laws, if she wins.

This is an important women’s health and duty of care issue. Women of reproductive age must have the right to access best-practice care, the right to decide.

Firearm policy is also predicted to ‘play a big role’ in the election, with some marginal seats being contested by candidates who are advocates for the rollback of gun control reforms that have been a public health success story in Australia. See more detail here on long-term efforts, in Queensland and nationally, to undermine the National Firearms Agreement (NFA) that established a national framework for the regulation of firearms. 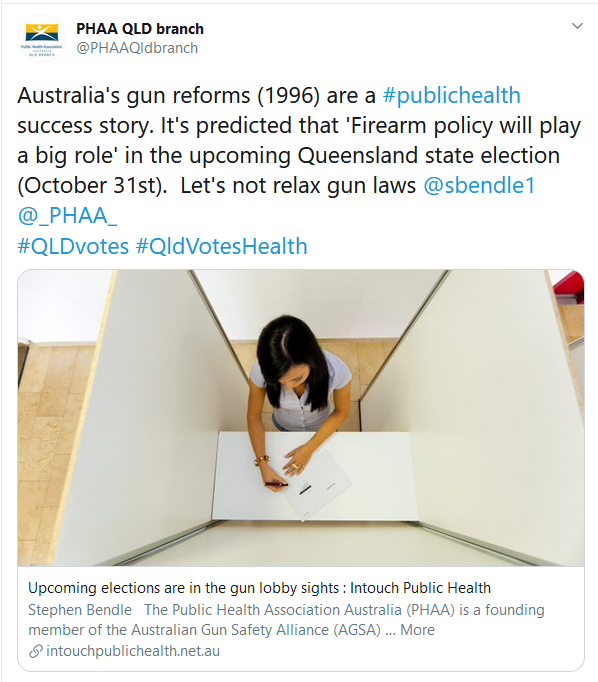 In other policies, the Labor Party is to be commended on its commitment to introduce fluoride to water systems state-wide, to protect the teeth of Queensland’s children.

In Australia funding of health promotion and illness prevention has been intermittent and is currently well below the level needed to secure social and economic benefits. Public health and health promotion workforce funding should be strategically allocated in order for long term planning, monitoring and evaluation of population health outcomes over time.

We will also examine this priority in the #QldVotesHealth series. 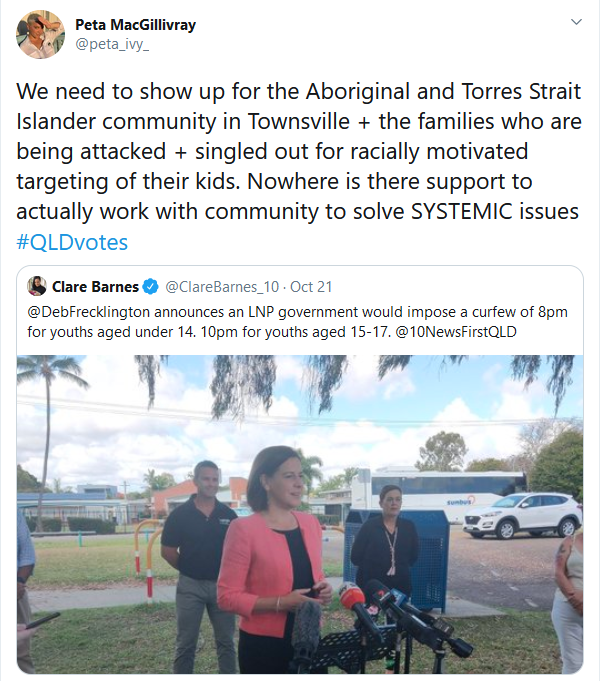 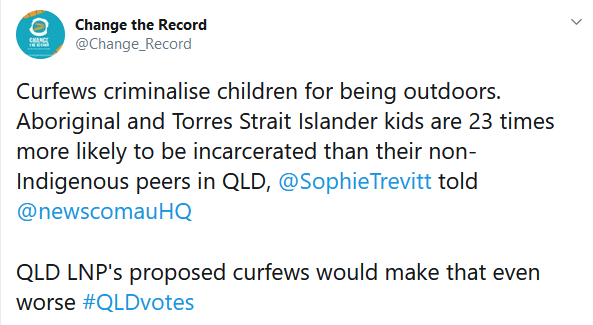 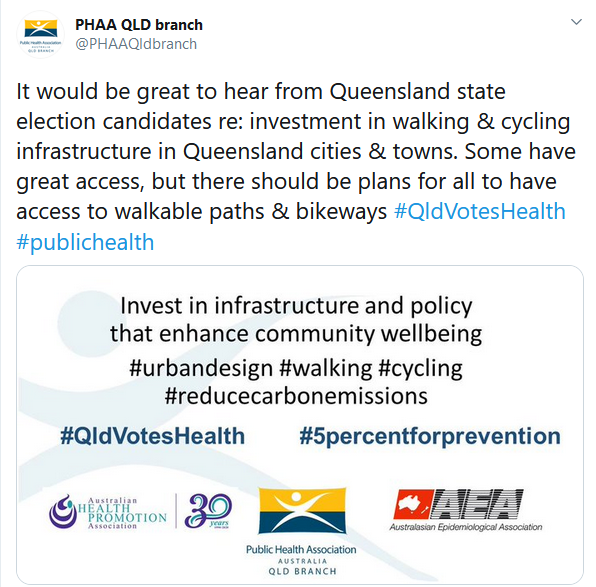