What are the health implications of building more prisons?

Update, May 22: Extra material has been added at the bottom of this post about an assessment of the likely impact of a new correctional facility in Gatton, Queensland.

Health journalists (and our audiences) might get better stories come budget time if we looked beyond the health department papers. That is one of the suggestions from an article that I wrote last week for Crikey (subscribers only).

A case in point comes from the recent Victorian budget’s allocation of $670 million to build a new 500 bed medium security prison in Ravenhall.

There are plenty of health angles to this news (and this post is the first in a two-part series examining some of these).

The Victorian Government has highlighted some economic benefits from the new prison (“the construction project is expected to deliver an estimated 800 construction jobs and 580 ongoing staff positions”), but there are likely to be many economic, health and social costs as well.

It would be useful to see some systematic analysis from a health impact assessment (HIA), considering the likely consequences for the health of prisoners, their families and their wider community, for prison staff, and for the community where the prison is to be built.

It would also be useful to hear about what role the health sector could play in reducing demand for more prisons. A recent report from the UK suggests, for example, that investing in drug treatment services is a cost effective way to prevent crime.

It is telling that Victorian Justice Department performance statement has set a higher target for 2012-13 for the average daily number of prisoners (4,950-5,220) than the 2011-12 target (4,550-4,750). It says this “reflects an anticipated increase in bed demand driven by population growth, sentencing reforms and additional police.”

This seems a little like boasting about building more hospital beds, rather than focusing on reducing demand for new hospital beds.

VOSS has highlighted some of the opportunity costs of the new prison spend, stating that “every dollar spent on prisons is a dollar not spent on programs that work – affordable housing, parenting support for vulnerable families, drug and alcohol rehabilitation, mental health programs, and education.”

Meanwhile, in the article below, Jonathan Heller, the Director and Co-founder of Human Impact Partners, a California-based NGO whose mission is to increase the consideration of health and equity in decision-making, shares a view from the US of the school-to-prison pipeline (which reads like a lesson in what not to do).

Unpicking the links between schools, prisons and health

While most people in the United States don’t think of schools, incarceration, and health as being related, the three are actually deeply entangled.

Many advocates for low income populations and people of colour here focus on the “school-to-prison pipeline” that systematically channels our kids from public schools into the juvenile justice system for normal adolescent behaviours. Hyper-incarceration and poor education impact the short- and long-term health and well being of the individuals involved, their families, and all of our communities.

Public schools have been chronically underfunded. The funding they do get is usually distributed not based on school and student need, but rather by teacher pay, with more experienced teachers choosing schools in better neighbourhoods.

The result is that schools in wealthier neighbourhoods end up with more funding than schools serving neighbourhoods that actually need more resources. Education has been shown to be closely associated with health – those with more education are more likely to be healthy and live longer.

The influences on health happen through links between education and jobs/income, social and psychological factors, and health knowledge and behaviours. Children in poorly funded schools in low-income neighbourhoods are less likely to graduate and go on to college, which then puts them at a life-long disadvantage from a health perspective.

A more equitable alternative would allocate dollars so that all schools have the resources that they need, thus enabling schools with higher needs to support their students and become resources to the communities they serve.

Additionally, so-called “zero-tolerance” discipline policies in schools, in which even minor infractions lead to severe punishments such as suspension and expulsion, have led to children, especially kids of colour, being “pushed out” of schools.

While no one would dispute that misbehaviour must be addressed, these policies in practice have resulted in meting out punishments that do not correspond with the misstep. For example, white children are typically punished for well defined issues like getting caught taking drugs, but youth of colour are severely punished for ambiguous misbehaviours such as “deviance.”

These policies have been shown to lead to many negative education outcomes including increased school drop-out rates, negative attitudes about school and feelings of alienation, misbehaviour, violence, drug use, and referrals to the juvenile justice system.

These, in turn, lead to many negative health outcomes including shorter lifespan, emotional and mental health disorders, chronic disease (e.g., diabetes), injury and death from violence, and substance abuse.

Alternatives to zero tolerance policies, such as Positive Behavioural Interventions and Supports (PBIS) and Restorative Justice (RJ), are starting to take hold and show improved outcomes, including reduced incidence of negative behaviours. These changes take training, funding, and support from administrators, teachers, and parents.

Over the past several decades, the US has used a combination of the War on Drugs, mandatory sentencing, and other means to become the country that incarcerates the highest percentage of its own population in the world.

This has taken place during a time in which crime rates have not increased. Most people in the prison system are there for minor drug related offenses and probation violations. Despite the fact that drugs are used at the same rates in White and Black communities, African Americans are extremely over-represented in the prison system; one in eleven Black adults was under correctional supervision in 2007. We are building prisons faster than we are building schools.

Recidivism rates are high because little is done to address the issues (e.g., substance abuse) that many incarcerated people have, and because those coming out of prison and their families do not have the institutional supports that they need to rebuild their lives.

Needless to say, incarceration has negative health outcomes for those incarcerated (e.g., injury, communicable disease, and mental disorders) and also for their families, who often suffer emotionally and financially.

Moreover, many communities are missing a disturbingly large percentage of young men to incarceration, and this loss of potential and future breadwinners, in turn impacts community asset building and long term well-being. Again, alternatives such as substance abuse treatment and mental health programs can be used to divert people from prison and start to address the root causes of their individual issues. These programs have been shown to have better outcomes including lower recidivism rates and are even less expensive for the taxpayer.

Looking at these issues jointly and through a health and well-being lens, in which health includes physical, mental and social aspects, can be an effective way to inform and change the conversation about our education and incarceration policies.

With our partners, we at Human Impact Partners are conducting a series of studies looking at the health impacts of proposed policy changes – equitable distribution of school funding, implementation of Positive Behavioural Interventions and Supports  and Restorative Justice policies, and funding diversion programs such as drug courts.

These studies explain how the education and incarceration systems we currently have in place affect something we all value – health.

• Since co-founding Human Impact Partners in 2006, Jonathan Heller has worked on over a dozen health impact assessments, conducted many HIA trainings, and has mentored others on how to conduct HIAs. Prior to moving into public health, he worked for nine years in the biotech industry. Jonathan received his bachelor’s degree from Harvard University and his doctorate from University of California, Berkeley, and he served in the Peace Corps in Papua New Guinea. Jonathan currently serves as the Chair of the Provisional Steering Committee for the newly formed Society of Practitioners of Health Impact Assessment (SOPHIA) and as Chair of the Board of the Center for Community Change.

In the next post,  Dr Alex Wodak puts the case for drug law reform.

On related matters, there is some relevant material about using evidence to inform policy to reduce demand for prisons in this chapter from a 2007 report that I co-authored for the Milbank Memorial Fund in the US, Improving Population Health: the Uses of Systematic Reviews.

Thanks to Croakey contributor and Health Impact Assessment consultant Ben Harris-Roxas for alerting Croakey to a 2007 social impact assessment conducted in advance of the construction in Queensland of the Gatton “correctional precinct”, whose phase one has since opened for business.

The document gives an interesting insight into the range of effects that a prison can have on a local community, although it does not consider the broader policy issues and questions outlined in the two posts of this series.

The report provides an overview of the area’s social and economic demographics, and makes predictions for the facility’s likely impacts, both positive and negative.

It is clear that a prison brings many economic and employment benefits to an area (the direct economic impact to 2036 is estimated to total $7.5 billion, with the onsite workforce expected to range from 300-470 workers, and almost continuous construction work expected til 2015).

The document also considers the implications of the boost to the local population from the arrival of prison staff, construction workers and prisoner families. This has consequences for housing, transport and children’s, youth, health and community services – all of which seem to have been over-stretched even before the prison project.

The document says there is no evidence that the correctional precinct will increase crime:

A common fear associated with correctional facilities is that they will increase crime in the local community. A review of literature suggests they have no impact on local rates of crime46. In fact QCS research47 found that communities near Correctional Centres have experienced declining crime rates in line with the rest of the State. An analysis of crime statistics for Maryborough both before and after the Correctional Centre was established in 2003 (in Figure 20 and Table 30) confirms these findings.

These tables give an overview of the issues considered. 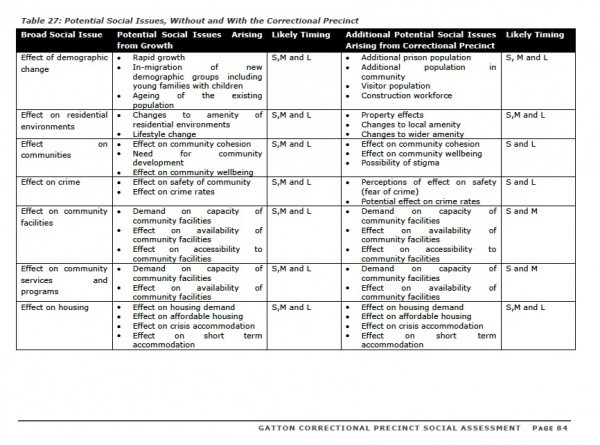 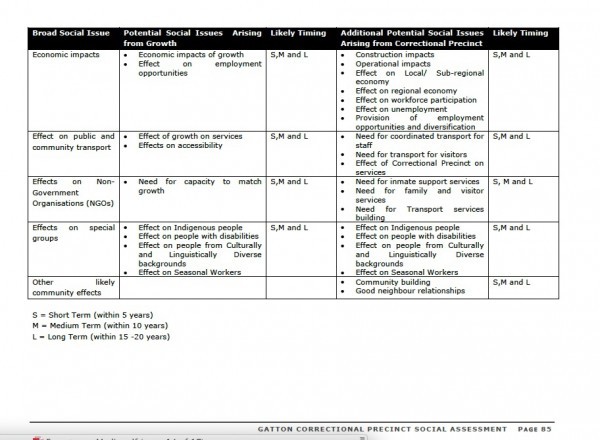 The section of the report that will stay with me (which is more about the reality of life for prisoners than the impact of prisons on communities) is this:

Information provided from other areas where Correctional Centres have been built indicates that only 25% of prisoners (1 in 4) receive visitors.

It could be interesting to see these types of analyses done with a different format: explicitly looking at which people and what interests are the winners and losers from the construction of new prisons.

PrevPreviousA wrap of recent news on McDonald’s, marketing and health (and some parallel universes)
NextWhen will policy catch up with the science on drug prohibition?Next