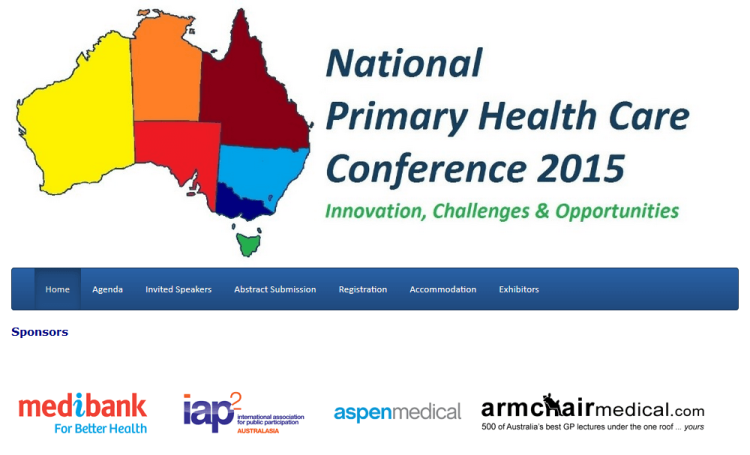 What are the risks when public health events have private health sponsors? 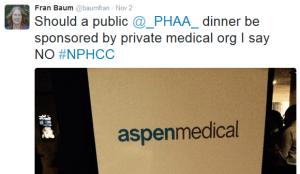 Conflicts of interest in health and medical research have been big topics at recent conferences covered by Croakey: at the Oceania Tobacco Free Conference and at the Public Health Association of Australia (PHAA) Population Health Conference.

Leading international public health researcher Prof Lisa Bero was a keynote speaker at both, and this week will co-host in Melbourne a practical workshop for journalists and writers on uncovering and covering conflicts of interest in health.

The issue struck close to home earlier this month at the PHAA’s National Primary Health Care Conference, where Medibank and Aspen Medical were among the sponsors.  In the post below, GP Dr Tim Senior raises concerns about the PHAA building such a relationship with Medibank. It’s a very timely discussion given growing concerns that private funds could soon be playing a much greater role in primary care services in Australia. Croakey has invited the PHAA to respond.

I love the Public Health Association of Australia. Michael Moore, their CEO, launched the collection of my Wonky Health columns. They have been a long-term financial supporter of Croakey. And they are a rational public health voice for using evidence in policy, for thinking about the social causes of poor health, and for making sure all Australians are able to get high quality health care, not just those with big wallets and big voices.

The pressure for these policies will continue to grow, with many in the medical profession, in politics, and even patient groups willing to go down this path at the expense of worsening health.

Fortunately, the Public Health Association of Australia won’t stop speaking out on health for all.

At the recent PHAA National Primary Health Care Conference website, you’re met with the usual cluster of sponsors’ logos, fewer than for many medical conferences. But what’s this? Medibank are one of the four major sponsors. And, perhaps an unrelated fact, they are providing one of the keynote speakers.

I am certain that there is no clause in any contract that specifies what the PHAA can advocate for. Certainly, they’ve only very recently adopted a strongly worded policy on Private Health Insurance. But that’s not how these things work. PHAA and Medibank now have “a relationship.” Will PHAA be a little more gentle because they would like funding for next year’s conference?

For Medibank they get to be associated with “Public Health” – that services they insure or purchase are improving the health of the public. In this context, that means protecting people’s health by offering general practice services and other services in the community. But only to “our members,” rather than those who really need it. But they get the shine of appearing to do public health work, without the actual difficult bit of changing unhealthy societies.

Next time a health minister’s advisor turns out to be an ex-Big Food company lobbyist, next time a group of dietitians turn out to be sponsored by lots of food companies, including Nestle, or cyclists by Coke, or guidelines committees by numerous drug companies likely to benefit, or whole fake journals purchased by a drug company, what will the PHAA say? Because pointing out these potential conflicts of interest will just be answered by a simple, “It can’t be that bad. You do it too.”

The medical profession is very gradually edging away from sponsorship. We’ve seen the damage tobacco companies did in strategic sponsorship to delay tobacco control. We see exactly the same thing with fossil fuel companies and climate change. Drug companies allow marketing to dictate the reporting (or not) of their drug trials, and pass off marketing sessions as “education.”

There’s plenty of evidence that, in general, influence through sponsorship of corporations is subtle and pervasive, changing the terms of the debate in their favour. For the PHAA to achieve their goals of health equity – which I hope they do – Medibank would have to treat the least profitable section of society with the most complex needs, who can’t afford to be members. In a battle between the profits of a health insurance company and the funding for a conference, I know who my money would be on to win.

Perhaps I’m naïve. Perhaps I’m asking for too much purity. Perhaps there is no way to fund knowledge sharing and dissemination anymore without corporate sponsorship. But perhaps the consequences are that only individuals get to speak out for those without. Perhaps all organisations are corporates now.

Dr Tim Senior is a GP who works in Aboriginal health, a contributing columnist to Croakey, and author of #WonkyHealth – the e-book. Follow him on Twitter: @timsenior