What are you sharing when it comes to health? The latest news on social media

The latest Pew Report of US media trends shows the dynamic state of the news media industry, with the rise and fall of different sectors and publications. While newspapers continue to dive, mobile news consumption maintains its inexorable rise, and podcasts also are gaining popularity.

The increasing complexity and diversity in the news media space creates opportunities and challenges for public health advocates.

The Share Wars project may be of interest to many in the health sector for the insights it provides into how news stories are being shared on social media. According to one of the project’s founders, journalist Andrew Hunter, people tend to share stories that are close to their hearts.

The Share Wars team’s analysis of thousands of stories shows about 60% of sharing activity on news sites is generated by people passing judgement on others or taking a stand on an issue. We call this behaviour “Norming”.

Norming is a term we borrowed from sociology that describes the creation and reinforcement of group identity around ideas and values.

One subject that compels people to norm more than most is health. Why? Because health issues are central to our lives and identities. Health affects those we love and care for. Health is a matter of life and death.

When you bring children into the mix, norming goes up a level. People really fire up.

So it makes sense that the current undisputed heavyweight sharer in health news is the anti-vaccination debate.

Our data shows that 10% of social media activity around Australian news sites was driven by health stories and that more than half of those were articles about the anti-vaccination movement.

The graph below shows the breakdown of Facebook and Twitter shares across health stories since the start of February 2015. 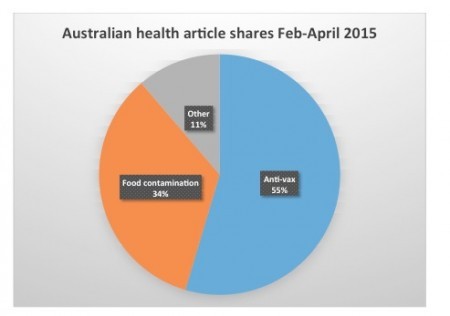 As you can see, the other big chunk of sharing activity was generated by people informing their network of food contamination: mostly the Hepatitis A-in-frozen berries scare. We call this behaviour “Newsbreaking”. Newsbreaking accounts for about 15-20% of article shares.

The Other in our sample comprises stories about Belle Gibson – the “wellness guru” who faked her cancer – and Alzheimer’s.

This breakdown comes from our analysis of the 200 most-shared Australian news stories since the start of February 2015.

To help us track sharing across news sites, we developed software that captures all the stories from 140 news homepages around the world. It then requests share counts from Facebook (likes, shares and comments) and Twitter (tweets and rewteets).

It’s called the Likeable Engine – and it’s an excellent free real-time tool if you’re into what’s trending on social in the English-speaking world.

Below are the top 10 most-shared health stories from the past three months. There’s only one non-anti vax story in the batch (No.2, a story about an Alzheimer’s breakthrough):

3. Anti-vaxers, you are baby killers

10. Parents who refuse to vaccinate their kids set to lose $15k in benefits

If we repeat this exercise in another three months, there’s every chance a different issue will have replaced anti-vax as the main health debate on social media.

We’ve seen the issues people norm around pick up steam and then dissipate again in time. Gay marriage was huge back in 2012 but has not registered as prominently on the Likeable Engine recently.

What we do know is that people share articles about issues close to their hearts.

If you want to stay on top of what sort of stories people value, the Likeable Engine is a good place to start.

• The Likeable Engine is on the longlist for a Walkleys Foundation journalism innovation grants (and so is Croakey). Check out the list – there are many projects that may be of interest to Croakey readers.

PrevPreviousRallying, marching and tweeting for #SOSBlakAustralia
Next‘You’ve saved a life, now what?’ A field report from Nepal on the critical role of rehabilitationNext