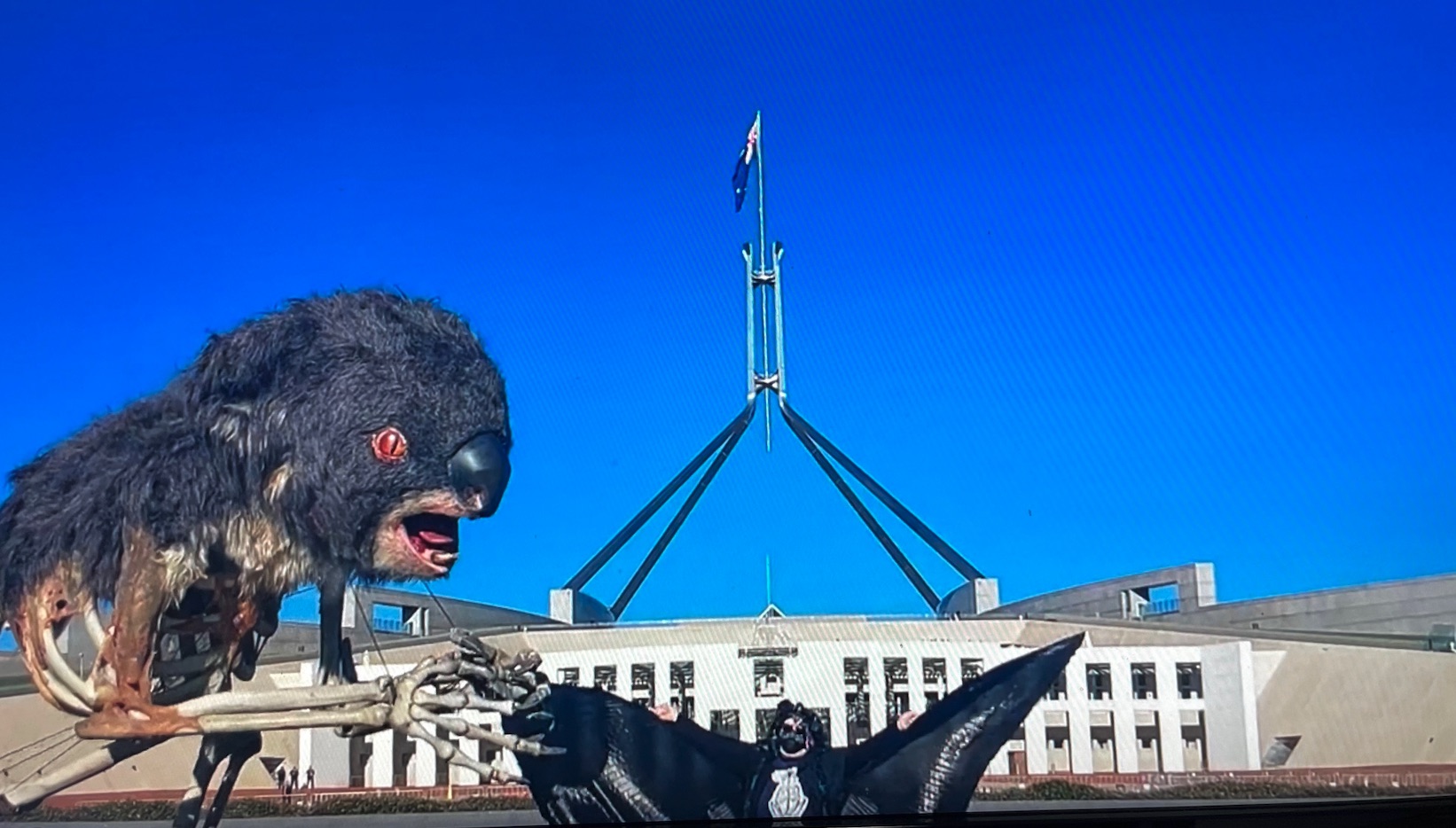 What can the “public health playbook” offer those advocating for a healthy, safe climate?

Introduction by Croakey: In Canberra yesterday, the climate action group Extinction Rebellion Australia brought a grotesque figure to bear upon Parliament House. “Blinky” is a four-metre tall representation of a burning koala, symbolising the many animals killed in the 2019/20 climate-fuelled bushfires.

The protesters argued, as have so many health, medical and scientific experts and agencies, that there can be no more new coalmines or gas-fields if we are to have a chance of ensuring a livable climate.

It is a timely moment, with so much focus on the political negotiations between the Albanese Government and the Greens and Independents, to reflect upon the role of the commercial determinants of health in bringing us to this point.

What can the “public health playbook” offer those advocating for a healthy, safe climate?

Eight key suggestions are made in the article below, from public health experts from the University of Melbourne, World Health Organization and National Council Against Smoking, South Africa. The advice is also relevant for many other health challenges facing the new Government and the 47th Parliament.

Many powerful businesses actively oppose public health policies and actions – for example warning labels on alcohol or access to generic medicines – because these threaten their profits.

To protect and promote public health, it is necessary to take on powerful corporations. Our research presents strategies for how this might happen.

Commercial actors are deeply embedded in our lives, though their influence on our health may be more or less visible. Some companies produce products that damage and destroy human health and the environment. These ‘unhealthy commodity industries’ include tobacco, alcohol, ultra-processed foods, fossil fuels and nuclear weapons amongst others.

In other cases, businesses engage in practices that go against the interests of public health. Many of the most effective and equitable policies to improve the health and wellbeing of humans and the planet threaten the business models of powerful corporations. Taxes on sugary drinks, for example, are strongly opposed by the soft drink industry, while universal access to generic medicines (including COVID-19 vaccines) are opposed by pharmaceutical companies.

Oil and gas companies oppose many of the most effective and necessary actions required to avoid a climate crisis, and many transnational companies lobby to limit local worker protections.

Similarly, the transnational tobacco companies, especially when operating in low- and middle-income countries, including South Africa, use a broad array of highly sophisticated tactics to oppose the implementation of many of the effective tobacco control strategies.

It is far too simple a claim that all businesses engage in harmful practices. The business world is immensely diverse. If we include all those engaged in commerce (the buying and selling of goods and services) it includes multinational companies, mom-and-pop corner stores, street vendors, corporate foundations, village doctors and more. These commercial actors engage in many different forms of economic activity – there are hairdressers, financial advisors, lawyers, garbage collectors, teachers and prison wardens. By no means is all economic activity problematic. But some business activities are very harmful.

While the issues and businesses are many and varied, the strategies employed by the most powerful businesses are similar. We and others call them the ‘Corporate Playbook.’

This playbook is metaphorical of course – we doubt there is a formal playbook shared at investor meetings.

That said, investigative journalism, leaks from hacked emails, and documents revealed during litigation provide insights into the detailed strategies discussed behind closed doors that suggest a Corporate Playbook is not too far off the mark. The figure below describes eight strategies in the Corporate Playbook. 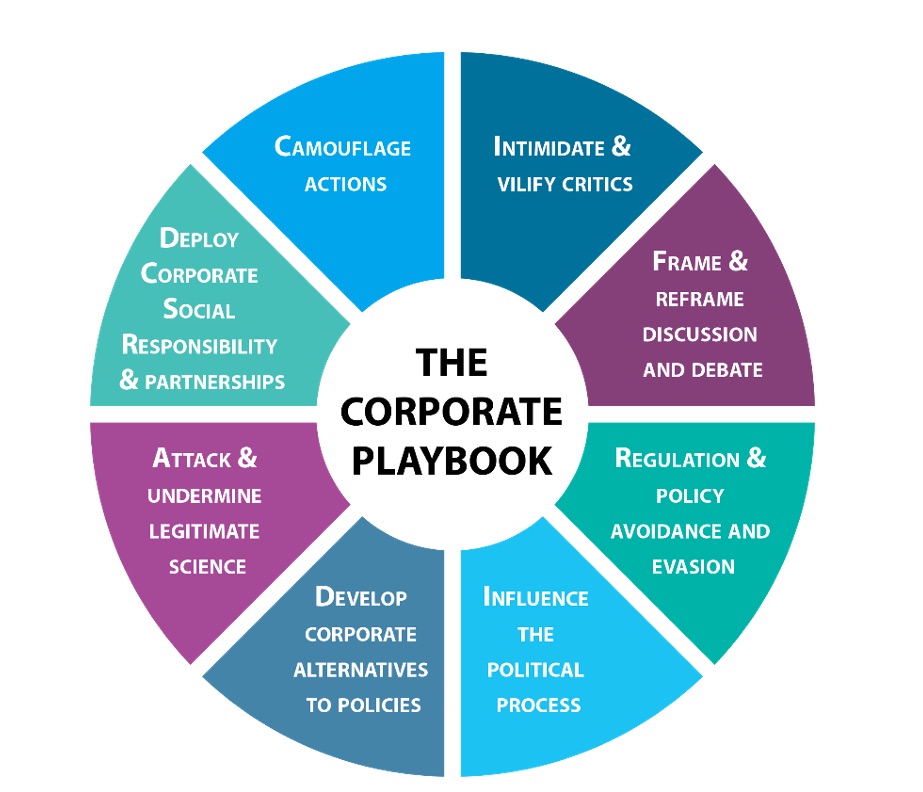 Strategies for a public health playbook

To help overcome these barriers, we analysed strategies from accounts of researchers and advocates working to combat the corporate playbook. Here, we present a set of eight strategies designed specifically for the public health community. 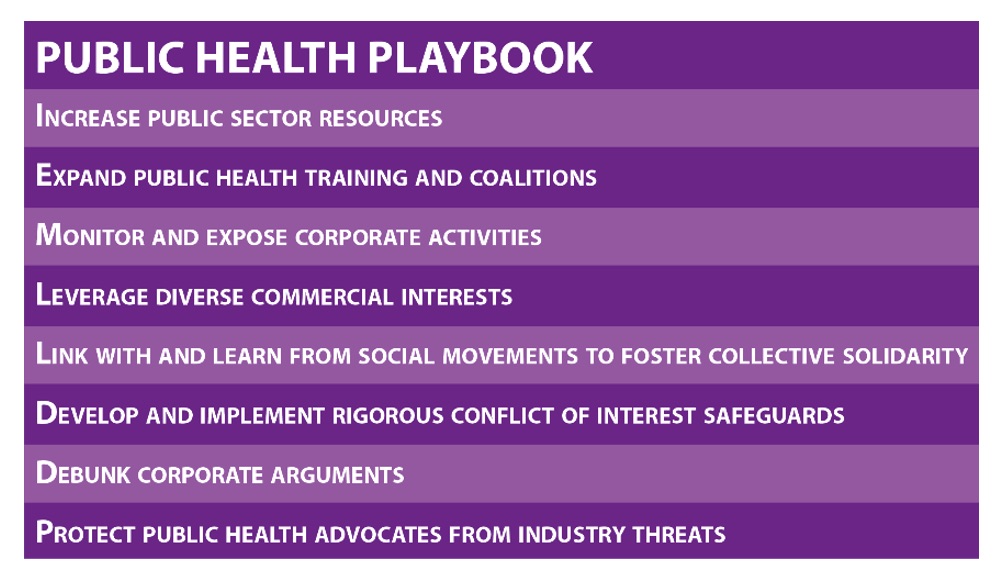 Having a well-funded public sector is a first step towards enabling governments to hold corporate actors to account. Potential funding models include health levies on tobacco, alcohol and sugary drinks as well as so-called wealth or solidarity taxes.

While easier said than done, this warrants critical attention as government dependency on the investments or the generosity of corporations is often a key barrier to developing and implementing policies that may go against business interests.

Fear of corporate retributions like this have ‘chilled’ governments against developing regulations that could improve public health but harm corporate profits.

Traditional public health training that focuses on epidemiology and health economics, while important, is not sufficient to equip the public health workforce with the skills and knowledge needed to combat the corporate playbook.

Additional skills and expertise are needed, such as in political science, commerce, law or digital communication. A leadership skills program established in Malawi is one example of moving beyond traditional public health curriculum.

Beyond this training, public health actors can expand their allies to include business experts, current and former public servants, journalists and others.

3. Link with and learn from social movements to foster collective solidarity

The most powerful companies blocking public health efforts are transnational, so transnational networks and coalitions are necessary to counter their influence. Many of the businesses who drive health harms also drive harms linked with climate change, human rights and democracy.

The same social movements that have arisen to fight on these issues often target the same corporate playbook. There are clear opportunities to link with and learn from these organisations, such as Avaaz, Move On, 38 degrees, Get Up and La Via Campesina.

Corporations target individuals, organisations and even countries. One protection strategy includes technical assistance in drafting health policies to avoid legal challenges as well as litigation support for LIMCs defending legal challenges (for example, the  Anti-Tobacco Trade and Litigation Fund by Gates and Bloomberg).

At the individual level, employers can support public health actors, for example universities providing secure contracts for academics or legal support if required.

To ensure that research and policy making are free from vested commercial influence, it is imperative that rigorous conflict of interest safeguards are used. The World Health Organization Framework Convention on Tobacco Control, the first and only international health treaty, recommends excluding the tobacco industry from policy making, but this needs to be expanded to many more industries. This includes unhealthy commodity industries, such as alcohol, ultra-processed foods, fossil fuels and weapons manufacturers (for example, The Treaty on the Prohibition of Nuclear Weapons).

This could also go further and exclude entities in direct and indirect relationships with those actors (for example, through funding relationships or board membership). The Pan American Health Organisation has taken steps to develop a conflict of interest tool for nutrition policy making.

To support independent research, public universities could change their direction away from industry partnerships and for-profit commercialisation, and instead develop robust standards for commercial engagement (for example, exclusion lists or aggregated blind funding pools for donors deemed acceptable).

This can help to ensure that research that might go against commercial interests receives funding, as well as research that is not intrinsically profitable, such as medical research on neglected tropical diseases.

Of the many possible avenues for challenging and reframing corporate messages, culture jamming presents an opportunity to inject some humour into an otherwise dark subject matter.

This approach has been used to subvert many advertising campaigns since then, included Coca-Cola’s Share a Coke campaign. 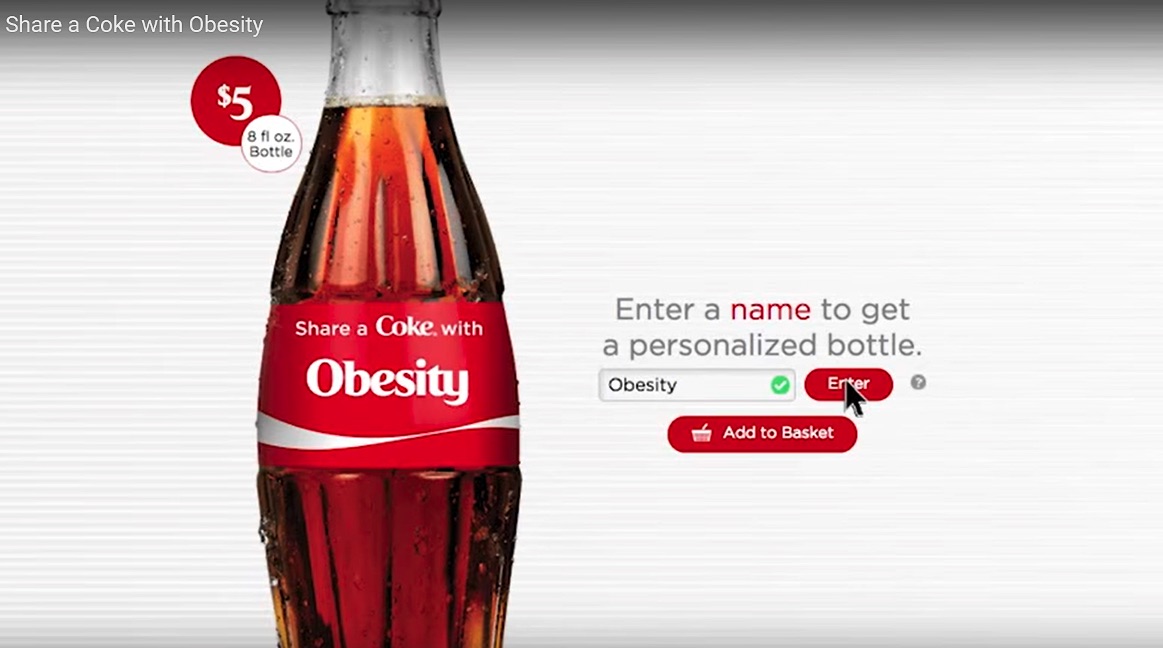 The diversity of the commercial world can be leveraged to pit power against power. The divestment movement is one example where the power of the financial community has been used to push companies to change their practices, in particular fossil fuel companies, tobacco and weapons companies. Thus far, health has not been a major focus, although the launch of the Global Health Score (building on the success of Tobacco Free Portfolios) may help to drive action.

A parallel approach is shareholder activism, where activists or organisations buy shares in a company to exercise influence from within.

Recent initiatives have included a push from Oxfam for Amazon to include a warehouse worker on their board and for The Coca-Cola Company to provide a report on ‘Sugar and Public health’ including risks to the company’s finances and reputation.

For these reasons, public health advocates seeking to take on the corporate playbook need to be proactive, creative and strategic.

The eight strategies outlined above are a first step. We hope they spark further discussion, ideas and innovation.

Dr Jennifer Lacy-Nichols is a Commercial Determinants of Health Research Fellow, whose program of work focuses on corporations, politics and health. Jenn’s current portfolio of work focuses on the development of methods to systematically monitor the political practices of corporations. Jenn completed a DPhil at the University of Melbourne in 2019 that analysed the soft drink industry’s political strategy to position itself as ‘part of the solution’ to obesity. She regularly supervises postgraduate research projects and is active in mentoring and leadership programs.

Dr Eric Crosbie is a political scientist who examines commercial determinants of health and public health policy. His research focuses on non-communicable diseases (NCDs) and examines how commercial industries (tobacco, food and beverage, alcohol, pharmaceutical and fossil fuel) are a key driver of the NCD epidemic and how they influence public health regulations. Dr Crosbie has both local and international experience collaborating with health organizations and health advocates to educate and disseminate academic research findings to policymakers, including publishing research in Spanish to reach wider audiences.

Dr Robert Marten is Scientist and Strategy and Partnership Officer (Unit Head) at the Alliance for Health Policy and Systems Research, World Health Organization. Before joining the Alliance, he worked in the WHO India Country Office, and was previously the Health Systems Coordinator for WHO in Sierra Leone. Robert holds a doctoral degree from the London School of Hygiene and Tropical Medicine.

Professor O (Lekan) Ayo-Yusuf is Chairperson of the School of Health Systems and Public Health, Director of the Africa Centre for Tobacco Industry Monitoring and Policy Research and Director of the National Council Against Smoking, South Africa. His main research focus is on behavioural epidemiology and related policy evaluation for non-communicable diseases (NCDs) prevention and health promotion, including clinical trials and capacity-building projects related to tobacco use prevention, treatment/cessation and policy.

Professor Rob Moodie is Professor of Public Health at the University of Melbourne’s School of Population and Global Health (MSPGH). His previous experience includes CEO of VicHealth and chair of the National Preventative Health Taskforce. His major interests are in public health leadership skills, health promotion, the role of unhealthy commodity industries (Big Tobacco, Ultra-processed food, Alcohol, Gambling) in harming health, as well as road safety.

See Croakey’s archive of articles on commercial determinants of health

PrevPreviousGrowing calls for political leaders to act on the evidence, to improve COVID control
NextRaising the voices of disabled women in conversations about violenceNext