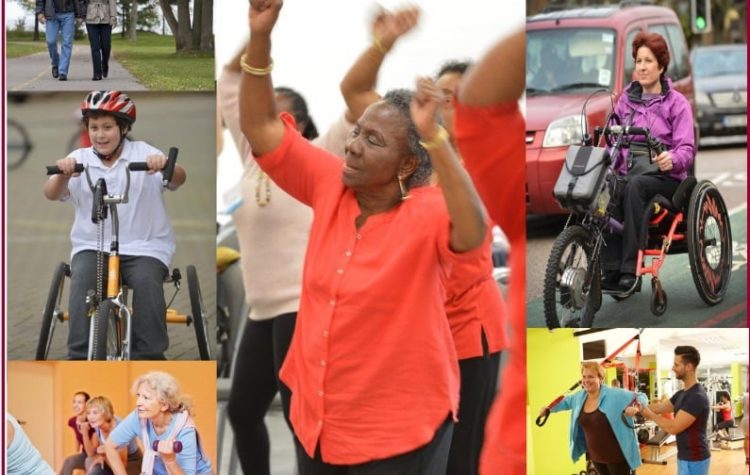 Detail from cover of English report, Everybody Active, Every Day: two years on

What can we learn from England about getting active and moving more?

In 2014, Public Health England worked with more than 1,000 individuals and organisations to develop a national physical activity framework, Everybody Active, Every Day.

They also released an overview of the evidence on interventions to increase physical activity and a toolkit for MPs. This encouraged politicians to lead by example – in being both a role model as well as an advocate; for example, for active transport, for encouraging workplaces to support activity, and for care homes to support older people to stay active.

Two years later, an update on the framework’s implementation reported encouraging results. Between 2013 and 2015, it said there had been a statistically significant one percent increase in the proportion of the population across local areas achieving the recommended 150 minutes of moderate intensity physical activity each week.

“This represents over half a million more people whose health and wellbeing is benefiting from being active every day. Increases have been seen in all nine regions of England and at local authority level around 60% of authorities have seen improvement,” the update reported.

So what might Australia learn from England when it comes to promoting physical activity?

Two architects of the English framework provided some answers to this question during recent presentations in Australia, as reported below by Helen Signy of The Australian Prevention Partnership Centre.

It’s a timely analysis given recent announcements in NSW and Victoria of measures focused on participation in sport – the recent NSW budget included financial incentives to support children’s participation in sport and fitness activities, while VicHealth recently announced a round of grants to community sports clubs in Victoria.

The UK is leading the world in its physical activity, sport and active recreation policies. England has a national commitment that everyone, regardless of their age, background or level of ability, should engage in sport or physical activity every day.

Dr Justin Varney of Public Health England and Ms Kay Thomson of Sport New Zealand (who was previously at Sport England) spent a week earlier this month outlining to key ministerial advisors and policy makers the steps they had taken to reach that point.

Their trip to Australia was timely, coming at a pivotal moment when our strategic approach to physical activity, sport and active recreation is entering a period of reform and renewed interest among policymakers – for example, the NSW budget announcement of a $100 “active kids rebate” per child per year to pay for sport and fitness activities.

Varney and Thomson highlighted the potential for Australia to learn from others and leapfrog ahead in tackling inactivity, especially as WHO has recently announced the development of a new global action plan for physical activity.

Their message was that this is a space where Australia at federal and state level can bring together partners across the public and private sector to significantly improve the lives of Australians at every age.

Varney said that taking a life course approach was key to the cross-sectoral, whole system approach at both national and local level.

He said there was a significant evidence base to support the benefits of physical activity across a range of policy areas, from preventing chronic disease and other major health challenges like dementia, improving educational attainment for children, boosting the economy through keeping high streets alive, protecting the environment by reducing air pollution, and preventing criminality and social isolation.

He highlighted the potential benefits of refocusing on reducing the number of people engaging in less than 30 minutes of physical activity per week, as they contributed the most to the burden of disease and were at highest risk of social isolation.

Encouraging these people to move just a little more at the right intensity – for example, to walk to the end of their street rather than just to their car – could make a significant difference for everyone, he said.

“Looking back, we should have started focusing on the most physically inactive from day one. In England, we have been learning to change the narrative so everyone gets moving every day and it’s about moving fast enough to make a difference to your health,” he said.

Over the last 12 years, the UK has moved from a focus exclusively on sport for sport’s sake to one in which sporting organisations work with other sectors to deliver a variety of outcomes mainly focused on participation and increased physical activity for everyone.

The movement began in 2005, when the UK won the bid to host the 2012 Olympics. As part of the bid, it set high-level targets for engaging more people in sport and physical activity by 2012.

It has led to the publication in 2014 of Everybody Active, Every Day (EAED),  a national, evidence-based approach that lays out a blueprint to create a social movement toward a more active society, to activate networks of professionals to support physical activity, to create the right spaces for active environments, and to scale up physical activity interventions. (An update was published earlier this year with the infographics below). 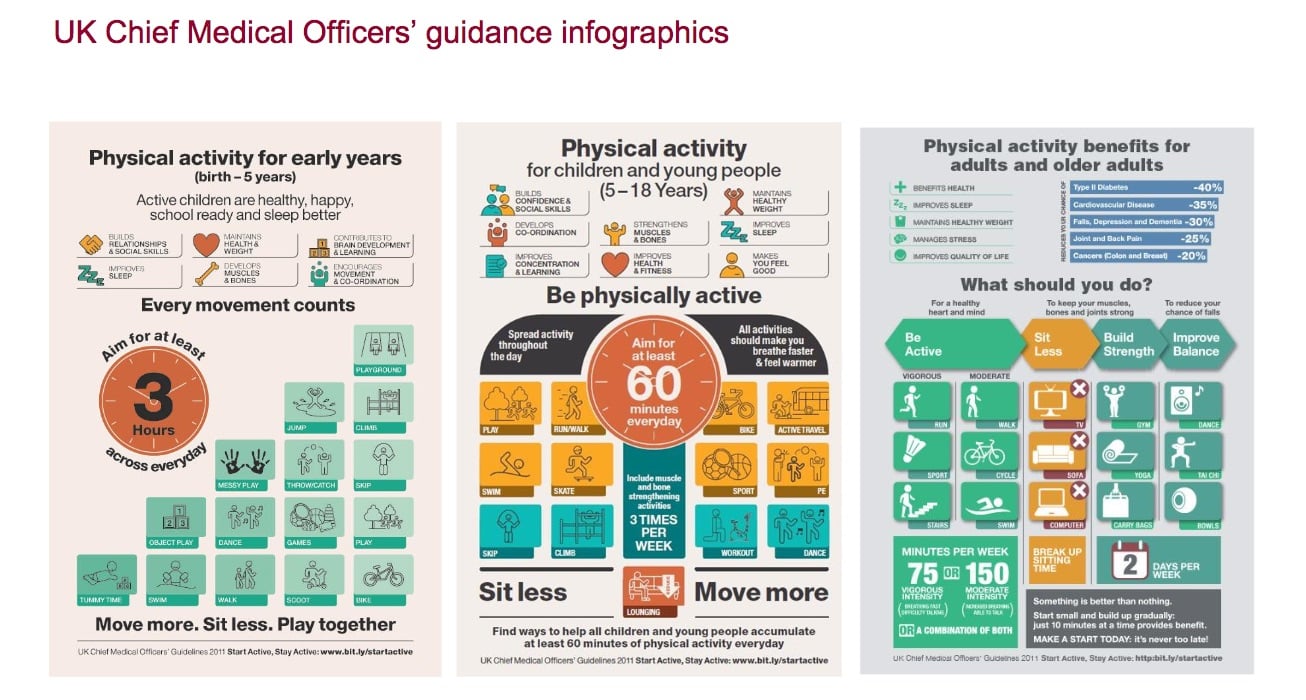 This was then built on in 2016 by Sporting Futures, a cross government strategy focused on sport and physical activity, setting outcomes for physical and mental health alongside personal and social development, and Towards an Active Nation, the Sport England strategy which focuses resources and attention on sport’s role in tackling inactivity.

Improvements in physical activity participation have been made through social marketing campaigns, for example in a partnership between Change4Life and Disney and by using the How Are You Facebook quiz to engage adults, peer to peer education programs for healthcare professionals, planning tools and resources for creating active environments, and standardised evaluation and feedback approaches to ensure that the evidence is being used effectively by commissioners and providers across the sport, leisure and fitness sector.

Thomson was the first health policy maker to work for Sport England. She described how sport in the UK had turned its attention to the physically inactive.

The Get Healthy Get Active program, launched in 2013, funds independently-evaluated pilot projects designed to reach inactive people and change their behaviour. For example, programs worked with partners who were engaged with the least physically active, such as cancer support organisations, local authorities and mental health agencies.

Sport hadn’t thought about the inactive person or putting the consumer first. For example, we realised that to do 150 minutes a week is a huge challenge for an inactive person, so we focused on giving them a quality experience and just getting them moving more.

England’s cross-government sport strategy is no longer about sport for sport’s sake, but instead focuses on physical and mental wellbeing, economic development, individual development and social and community development.”

Promoting activity after a cancer diagnosis

Dr Lindsey Reece, a Senior Research Fellow at the University of Sydney, working in partnership with NSW Office of Sport, led the design and implementation of several nationally funded initiatives through Get Healthy Get Active, such as working with a local soccer club to promote walking football for people recently diagnosed with cancer.

She said that, for the first time on such a scale, the process brought together a range of partners who were all passionate about the value of sport and physical activity to improve the health and well-being of local communities.

“It enables academics work closely with the community and voluntary sectors to best showcase their work as well as supporting the sport sector to recognise the important role they play in this area,” she said.

“The consistency of the Get Healthy Get Active approach allowed us as academics to not only collect and compare valuable evidence on the value of sport and physical activity on improving the health and wellbeing needs of inactive people, but also enabled us to support programs to collect and use valuable data.”

Dr Lou Hardy, PRC Senior Research Fellow leading the NSW Schools Physical Activity and Nutrition Survey (SPANS), told the seminar that recently-released 2015 data indicated only 28% of boys and 18% of girls in NSW primary schools engaged in the recommended level of 60 minutes of vigorous physical activity a day. By adolescence, that level dropped to 15% and 8% respectively.

Almost half of NSW children and adolescents had no idea what the physical activity recommendation was, while only two-thirds achieved adequate cardiorespiratory fitness levels and a third were at the acceptable level of muscular fitness, she said.

The trip to Australia by Dr Justin Varney and Ms Kay Thomson was supported by the Prevention Research Collaboration, the Heart Foundation, NSW Office of Sport, The Australian Prevention Partnership Centre, the WHO Collaborating Centre for Physical Activity Nutrition and Obesity, and Sydney University’s Charles Perkins Centre.

• Helen Signy is from The Australian Prevention Partnership Centre