What did the Marches in March reveal about community health concerns? And the global picture…

So much of the dialogue around health is top-down, driven by the interests of institutions, professionals, corporates, governments, and others with traditional forms of power.

The recent series of Marches in March can be explored from many different angles, but one is the opportunity they brought for the community to speak up on health concerns.

Some of these concerns were directly related to healthcare and health policy, as suggested by these tweets from the marches in Port Macquarie and Canberra. 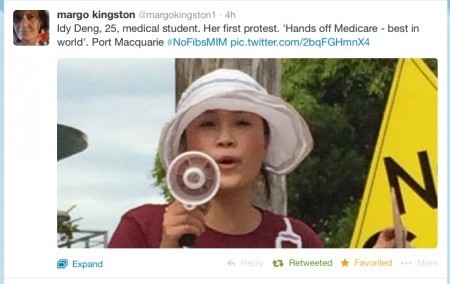 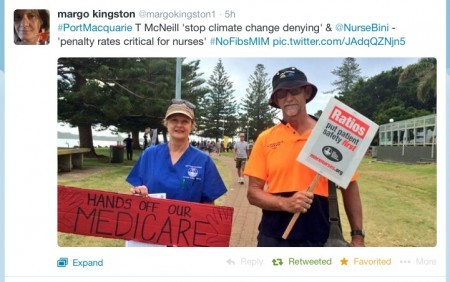 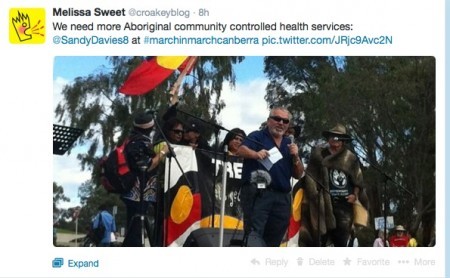 But it seemed (from where I sat, anyway) that the marches really put the focus on broader public health concerns, more than healthcare.

Many of the issues highlighted related to the wider determinants of health and health inequalities (not that this jargon would have cut it on any protest signs). The tweets below are from the marches in Darwin, Brisbane, Wodonga, Canberra and Sydney. 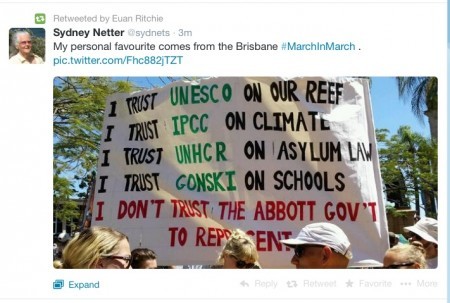 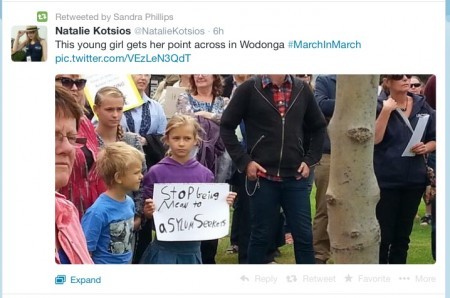 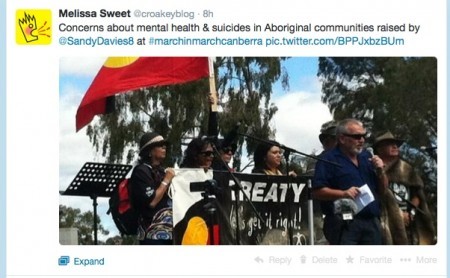 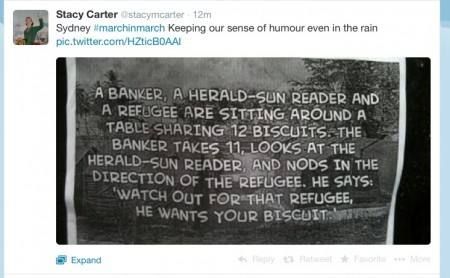 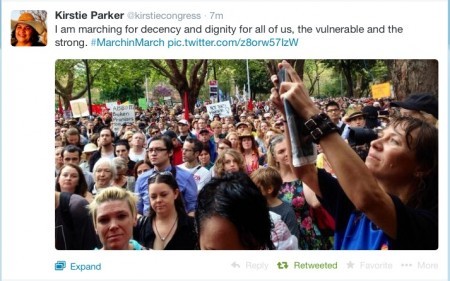 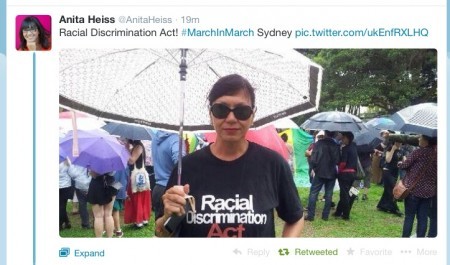 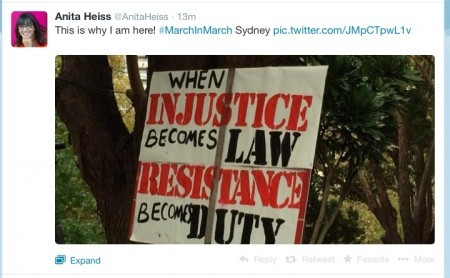 The marches also highlighted the inability of our national politic to deal with pressing public health threats, like climate change, and the role that the denigration of science has played in protecting unhealthy fossil fuel industries at the expense of the community’s health. 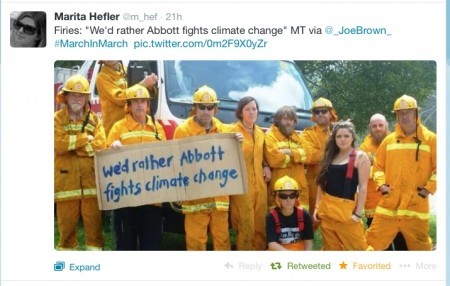 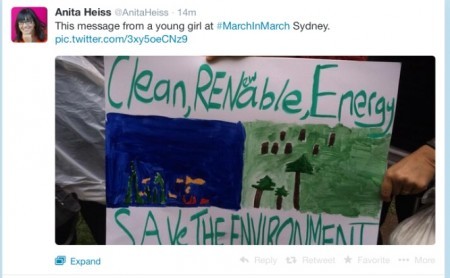 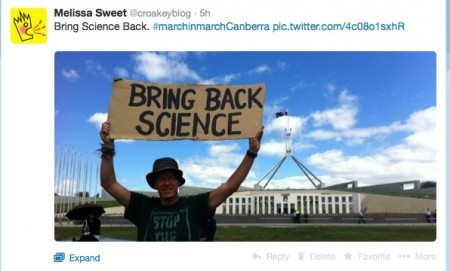 The tens of thousands of marchers were also a reminder of the intrinsic public health benefits of collective action – the good that is created through positive social connections.

As I took this photograph below, I could sense it was an empowering moment for these women from Geraldton in Yamatji country in Western Australia, to partake in such a symbolic flag waving. 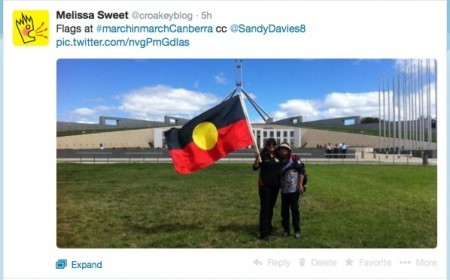 However, the mainstream media struggled to report the marches in any great depth or to examine the public interest issues involved beyond the predictable left/right political framing.

This failure has been widely critiqued; see, for example, this article by blogger Jim Parker (aka Mr Denmore).

Parker suggested other ways the media could have covered the story:

“One would have involved looking at the international context. The disquiet with institutionalised politics and the attendant media is NOT just an Australian phenomenon. Neither is the unease at the increasing capture of policy processes and outcomes by extremely wealthy and non-democratic groups.

There is a story to be told about the breakdown of democracy in the developed world and how Australia fits into that context. Lest this be considered some tinfoil hat theory, no less a publication than The Economist recently made this the subject of a special edition.

So instead of sitting around and poking fun at people’s banners or chanting “ew, you called Tony a rude word!” perhaps the Fourth Estate might like to provide some analysis that reaches beyond their cosy and simplistic left-right, party political view of the world?”

On a related note, there are also global health angles to explore, as evidenced by a recent series of articles in The Lancet highlighting failures in global health governance, and calling for greater representation of civil society, health experts and marginalised groups in decision making.

The Lancet and others are also asking for signatories to a  “Manifesto for Planetary Health” which calls for a transformation of public health and “a social movement to support collective public health action at all levels of society”.

“Our aim is to respond to the threats we face: threats to human health and wellbeing, threats to the sustainability of our civilisation, and threats to the natural and human-made systems that support us. Our vision is for a planet that nourishes and sustains the diversity of life with which we co-exist and on which we depend. Our goal is to create a movement for planetary health.

Our audience includes health professionals and public health practitioners, politicians and policy makers, international civil servants working across the UN and in development agencies, and academics working on behalf of communities. Above all, our audience includes every person who has an interest in their own health, in the health of their fellow human beings, and in the health of future generations.

The discipline of public health is critical to this vision because of its values of social justice and fairness for all, and its focus on the collective actions of interdependent and empowered peoples and their communities. Our objectives are to protect and promote health and wellbeing, to prevent disease and disability, to eliminate conditions that harm health and wellbeing, and to foster resilience and adaptation. In achieving these objectives, our actions must respond to the fragility of our planet and our obligation to safeguard the physical and human environments within which we exist

Planetary health is an attitude towards life and a philosophy for living. It emphasises people, not diseases, and equity, not the creation of unjust societies. We seek to minimise differences in health according to wealth, education, gender, and place. We support knowledge as one source of social transformation, and the right to realise, progressively, the highest attainable levels of health and wellbeing.

Our patterns of overconsumption are unsustainable and will ultimately cause the collapse of our civilisation. The harms we continue to inflict on our planetary systems are a threat to our very existence as a species. The gains made in health and wellbeing over recent centuries, including through public health actions, are not irreversible; they can easily be lost, a lesson we have failed to learn from previous civilisations. We have created an unjust global economic system that favours a small, wealthy elite over the many who have so little.

The idea of unconstrained progress is a dangerous human illusion: success brings new and potentially even more dangerous threats. Our tolerance of neoliberalism and transnational forces dedicated to ends far removed from the needs of the vast majority of people, and especially the most deprived and vulnerable, is only deepening the crisis we face. We live in a world where the trust between us, our institutions, and our leaders, is falling to levels incompatible with peaceful and just societies, thus contributing to widespread disillusionment with democracy and the political process.

An urgent transformation is required in our values and our practices based on recognition of our interdependence and the interconnectedness of the risks we face. We need a new vision of cooperative and democratic action at all levels of society and a new principle of planetism and wellbeing for every person on this Earth – a principle that asserts that we must conserve, sustain, and make resilient the planetary and human systems on which health depends by giving priority to the wellbeing of all. All too often governments make commitments but fail to act on them; independent accountability is essential to ensure the monitoring and review of these commitments, together with the appropriate remedial action.

The voice of public health and medicine as the independent conscience of planetary health has a special part to play in achieving this vision. Together with empowered communities, we can confront entrenched interests and forces that jeopardise our future. A powerful social movement based on collective action at every level of society will deliver planetary health and, at the same time, support sustainable human development.”

So perhaps one of the angles the mainstream media missed was that the local is also global; a myriad of connections can be drawn between the issues motivating the marchers and the fear of international public health leaders that we may be facing the collapse of civilisation and “a threat to our very existence as a species”.

While some critics have suggested the marches will not disrupt the status quo, they do illustrate the connective power of social media, and the capacity of citizen journalists to do it for themselves – some of the most comprehensive coverage came from Margo Kingston’s citizen journalism project, No Fibs.

This article in The Guardian, by  Van Badham, told of the role of  five key organisers – from Geraldton in WA, Daylesford in Victoria, the Blue Mountains, Kempsey and Broken Hill in New South Wales – none of whom had ever met beyond social media.

She wrote: “The organic, decentralized movement of non-partisan mass participation is its programme in itself.”

Meanwhile, Wendy Bacon wrote in New Matilda that we need to see more such peoples’ movements, if we are to have a sustainable and equitable future.

Indeed, one of the challenges for public health, as intimated by The Lancet’s manifesto, is whether its centralised institutions and structures can usefully connect with these emerging, decentralised forms of power in the community. These are times of threat, but also of opportunity.

Photo Gallery in The Guardian

Watch this clip of Father Rod Bower from the Anglican Church in Gosford – who is famous for his signs protesting the abuse of refugees’ human rights – calling for a society “based on an ethic of decency and compassion”. 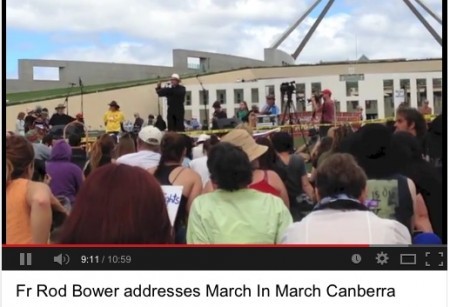