Home Healthcare and health reform health financing and costs What do the CPI figures really say about health?

What do the CPI figures really say about health?

If the Government takes a close look at the health component of the latest CPI figures, there are some clear lessons for policy, says Ian McAuley, a Centre for Policy Development Fellow and lecturer in Public Sector Finance at the University of Canberra. He writes:

“The movement in the CPI for the December quarter was 0.5 percent. Some media commentators picked up the fall in the health component, which dropped almost one percent in the quarter. If health had been excluded, the quarterly rise in the CPI would have been 0.6 percent.

This does not mean the Prime Minister’s initiatives to improve productivity in the sector have had a stunning early success.

The drop is due to an anomalous seasonality in health care costs, explained in the notes at the end of the CPI bulletin.

By the same mechanism, we can expect a significant jump in the health care component when, in April, the ABS reports on the current (March) quarter, as the safety nets for the PBS and the Medical Benefits Scheme (MBS) reset on January 1. 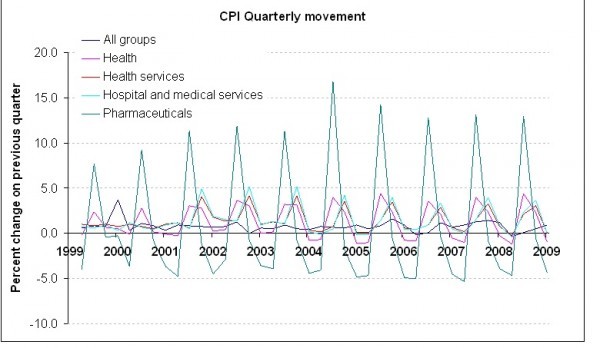 Within that group pharmaceutical prices have risen at an annual rate of 2.1 percent, showing what governments can do for consumers when they use their powers. The average rise in the hospital and medical services group, however, has been 5.8 percent. This group effectively excludes public hospitals, because they are free, but it includes the MBS and private hospitals, both directly through consumer out-of-pocket payments, particularly when specialists charge above the Schedule Fee, and indirectly through private health insurance.

But, with incipient signs of inflation appearing, the Government should be reviewing its permissive attitude to private health insurance, before it does to our health care costs what it has done in the USA.”