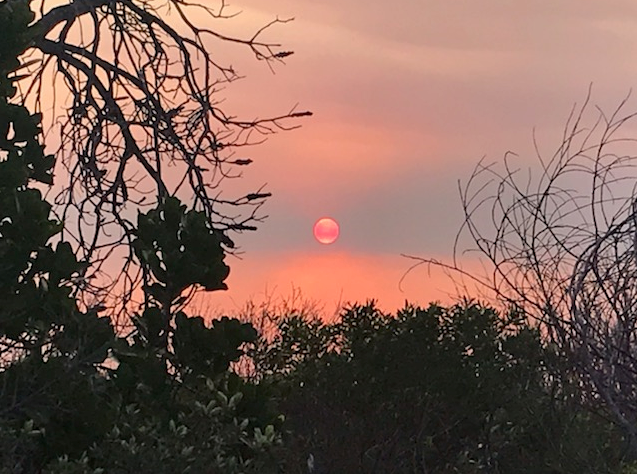 What do we need to do next? An emergency physician reflects on bushfires and heatwaves

Queensland emergency physician Dr Marianne Cannon was an intern in Victoria during the tragic 1983 Ash Wednesday bushfires, when 75 people were killed in south-eastern Australia.

Those memories were triggered again last month when Queensland had the worst start to the bushfire season on record, with one horrified fire official warning that dozens of blazing bushfires were an “omen” for what may come later in the summer.

Cannon writes below of the growing toll on individuals and communities of climate change, in this latest article published as part of Croakey’s partnership with the global Covering Climate Now initiative. You can see other articles in the series here.

She has also written about the impact of hotter and longer heatwaves on her elderly patients.

Early in September I spent a weekend on the south Queensland and northern New South Wales coast expecting blue skies and clean air.

Sadly, by Saturday midday a nasty sulfurous smell was wafting around the yard and by afternoon the air was ominously smokey as though the hinterland fires were a suburb away.

Sunset was a red orb, with the combination of haze and now smell of smoke giving an eerie Armageddon like quality to a usually idyllic coastal  scene.

Our beachwalk had me pondering if we were looking at the beginning of the end of our planet. By evening our eyes were irritated, noses running and the asthma cough developing, fortunately responding to inhalers.

Memories of the 1983 Ash Wednesday bushfires flooded back, when I was an intern in western Victoria and, despite the nearly 37 years which have passed since, many details are clear.

The north wind, smoke haze and the crowd of terrified children who came from the swimming pool under ember attack.

The coughing firefighters eager to get back to their trucks and the poor young man with extensive burns who later succumbed to a premature death.

They are memories that also haunt my colleagues these decades later, making us wonder if we have post traumatic stress disorder (PTSD) triggered by bushfire smoke.

This time around, I woke in the middle of the night wondering if the strong smoke smell which persisted meant that fire was racing down the hill to the coast…and what evacuation would look like, recalling images from Victoria of the coastal Wye River incineration a few years ago on Christmas Day.

Meanwhile, the washup of a stalling superstorm in the US on several Atlantic countries was  on our TV screens, with warnings that this is the new normal for the US and others who can less well afford it.

The weekend gave me cause to reflect on the mental health aftermath of natural disasters, where it has been shown that overall and new mental health presentations increase dramatically and prescription rates of antidepressants escalate, so the post-earthquake data from Christchurch tells us. Health worker absentee rates went up by 50 percent there too, while PTSD in firefighters and others, for example survivors from Australia’s worst ever bushfires on Black Saturday in 2009, has been shown to be significant.

What will it take for our leaders to take a better than minimalist approach to the underlying catastrophe – to worsening natural disasters – that is global warming? To take the politics out of what is a health issue and –  in a bipartisan, all levels of government approach – do the right thing by our farmers, children, and the elderly, who in heatwaves collapse with dehydration and sometimes die.

We seem to have in our climate policy a National Rifle Association-like ideological blindspot as to what needs to be done for the health benefit of all. While it is true that the poor do worse in natural disasters, there are some things money cannot buy, not even here in one of the world’s richest countries.

It was a page two story in the media outlets that covered it and didn’t seem to rate at all in others. It was a decision that many members have been asking the leadership to consider for a number of years and one which other organisations – like insurance companies – might wonder why it took so long.

As a healthcare problem – according to the World Health Organization, this climate emergency is the biggest public health threat  of our time – our minimalist approach, together with a lack of mitigation and adaptation plan, is bewildering, as are the hasty approvals given to the Galilee basin coal projects like Adani.

Subsidies to the fossil fuel industry are estimated to be billions annually; when we factor clean air for all, then surely this is more. A Melbourne University study showed that if we cut emissions now, this will save $500 billion to our economy by 2030. The economics don’t stack up, nor does the job argument in the highly automated coal industry.

One has to wonder what it will take in order for our leaders – especially in states outside Victoria – to step up and legislate for emissions targets with all that this implies. Clean air, like clean water, is a human right, one which we have taken for granted forever here in the “lucky country”.

When human rights are denied, especially to folk who are used to enjoying them, they will take to the streets as a last resort. Watching peaceful demonstrations met with police brutality over incipient loss of human rights in Hong Kong is heartbreaking.

Likewise, decent agricultural water management, clean air and the best possible  future for our children is about much more than money, and is something we alone – market or no market forces – cannot fix.

In the face of an ideologically driven approach – which has evolved from a denial of facts, fed by ongoing support of fossil fuel industry lobbyists, via accounting tricks on meeting international targets, to a fear-driven election campaign and now to leadership vacuum in terms of planning, ambitious targets and how we get to them – our leaders seem to have lost sight of what matters most.

As I lay awake that weekend, the question that reared its head over and over again was “what do we need to do next?”

• Dr Marianne Cannon is a south east Queensland based emergency physician with an interest in population health and disaster mitigation. Her interest in climate-related illness has been driven by the young people in her life, and a concern for vulnerable populations in her workplaces.

PrevPreviousHere’s what happened when codeine was made prescription only. No, the sky didn’t fall in
NextUN lays out urgent “to do list” on Australian disability rightsNext