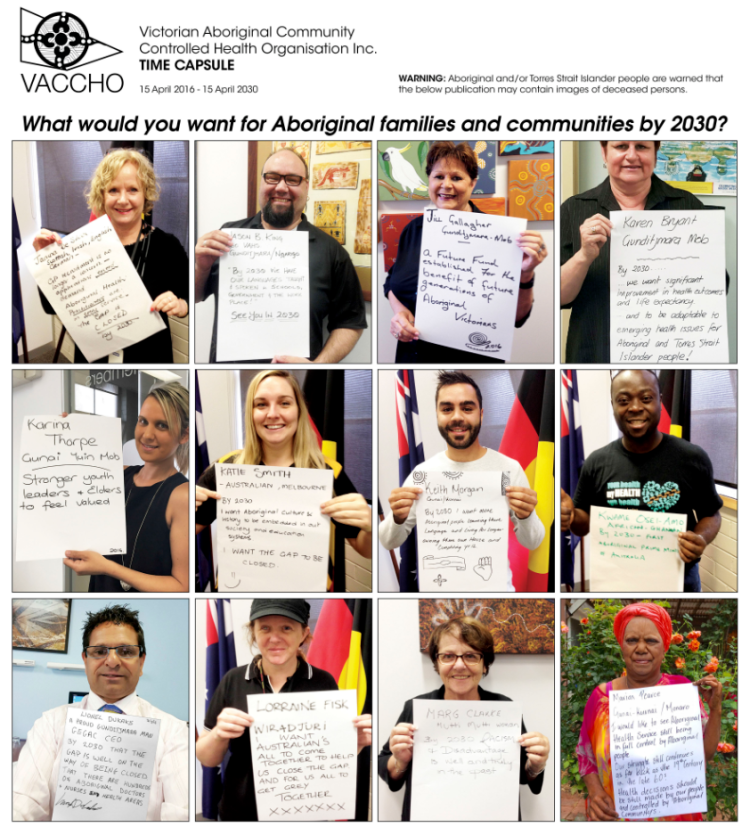 What do you want for Aboriginal families, kids in 2030? Important question for VACCHO’s 20th anniversary – & for this week’s IHMayDay16

The image above features some of the hopes for the future from Aboriginal health workers and organisations and community members that have gone into a time capsule at the home of the Victorian Aboriginal and Community Controlled Health Organisation (VACCHO) in Melbourne.

The sealing of the time capsule recently helped mark the organisation’s 20th anniversary – see the post below, from VACCHO Senior Policy Officer Dana Pyne, including a fantastic video of a new mural painted on the VACCHO building which makes a big splash on the urban landscape about rich, vibrant Victorian Aboriginal cultures. 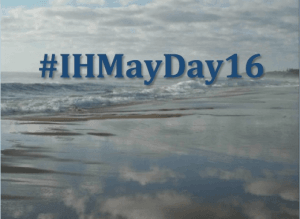 Similar messages will no doubt be among the many discussions to be tweeted out across Australia during the third annual Indigenous Health May Day Twitter festival to be held this Thursday, 12 May, with the theme of youth and families, and suicide prevention.

The event will be co-hosted by Associate Professor Bronwyn Carlson at the University of Wollongong, with her colleague Dr Tanja Dreher.

Discussions on the day will be moderated by the founder of #IHMayDay, Dr Lynore Geia from James Cook University, and by Assoc Prof Bronwyn Carlson and Croakey contributor Summer May Finlay.

On Wednesday, 11 May, the University of Wollongong will hold some public workshops: Indigenous Health and Social Media for Advocacy and Activism.

You will be able to track the discussions and news at #IHMayDay16 coming via a program of guest tweeters, including VACCHO, from 7am until 10pm AEST.

Read more about #IHMayDAy16 and please check out this post with some tip sheets that are designed to encourage widespread participation by individuals, workplaces, organisations, and universities. To get an idea of the depth and breadth of discussions, check out last year’s #IHMayDay15 wrap at Croakey.

What do you want for Aboriginal families and children in 2030?

That was the question asked of VACCHO Board members, staff, member organisations and members of the broader Aboriginal community in Victoria to mark our recent 20th anniversary as the peak representative body for Aboriginal health in Victoria.

The answers provided the visual aspirational document (see feature image above) to be placed in a time capsule for the next generation to understand where we have come from. It will also help measure the successes achieved by 2030.

The recurring themes were better health outcomes for Aboriginal people and finally closing the Aboriginal health gap by 2030.

Other inspirational and yet extremely achievable answers were:

There was even the hope for an Aboriginal Prime Minister of Australia. It prompted a laugh from the crowd but, who knows, the next Prime Minister could have been among us.

“We sincerely hope that the time capsule, when it is opened in 2030, will be a true reflection on positive and progressive changes in the political environment and the lives of our mob,” VACCHO chair Marcus Clarke told the crowd that gathered to mark the anniversary in April and also saw the launch of VACCHO’s 20th Anniversary building mural (see pic at the bottom of the post).

Three Aboriginal artists, Ray Thomas, Kulan Barney and Ruby Kulla Kulla, in partnership with world famous street artist Adnate, produced the mural which provides a snapshot of Aboriginal Victoria and is another Aboriginal cultural footprint on the city landscape.

The mural showcases 20 years of advancement and achievement in Victorian Aboriginal health. It represents Aboriginal cultures, families, communities and our diversity and is a representation of the unique and comprehensive services delivered by VACCHO’s member organisations.

“I believe the mural and its imagery is a beautiful representation and demonstration of VACCHO’s road from our past and our directions going into the future.”

Artist Kulan Barney believes that it is important to have Aboriginal art present, especially in urban areas and the city.

“We want our mob, our families, and our children to feel connected, proud, inspired and empowered by this mural.”

“We know that when Aboriginal people are strong in their culture, when culture can be seen and experienced, our mob stay connected, strong, happy and healthy.”

‘We know what’s wrong, we know how to deal with need, Aboriginal people take their health in their own hands and Aboriginal organisations in Victoria have done such a great job of this.’’

VACCHO’s Collingwood building provides Aboriginal people with a sense of permanency and identity as it is located in the historical meeting place for community in Victoria.

Watch this video of the mural being made and the cultural drivers behind it.

VACCHO also installed a members’ timeline in the building that lays out how, since opening its doors on 16 April 1996, VACCHO has been striving to improve the health and wellbeing of Aboriginal people and ensuring Aboriginal Victoria has a voice at the table at a local and national level.

VACCHO’s  first member organisation, the Victorian Aboriginal Health Service, was established in 1973. Its most recent, the  Cummeragunja Housing & Development Aboriginal Corporation, joined up in 2013. Over the years, Jill Gallagher told the anniverary event, VACCHO has worked across a much wider subject base than just health, reflecting the holistic Aboriginal definition of health. “This includes our focus on aged care, child protection, justice, governance and back of house services.”

Our  members’ cultural identities are an important source of strength, and this informs our ways of work and our integrity.

Over 50 per cent of the Aboriginal population in Victoria accesses an ACCO and almost 12,000 Aboriginal people have accessed an ACCO in the last 6 months. This is evidence that ACCOs are best placed to deliver services and keep our mob healthy.

One thousand Aboriginal babies visited an ACCO in the past 12 months, an imperative to continuing the momentum forward on closing the gap and achieving equality of health outcomes for our people.

VACCHO will remain self-determining and strong in culture and ensure that the Aboriginal Community Controlled sector continues to provide leadership in Aboriginal health and wellbeing.

This will be done through continuing  to build upon strong and productive working relationships across government, Aboriginal communities and other relevant stakeholders, taking in to account the learnings from the sector over the last 20 years, facing  the ongoing challenges head-on and of course, by acknowledging achievements. 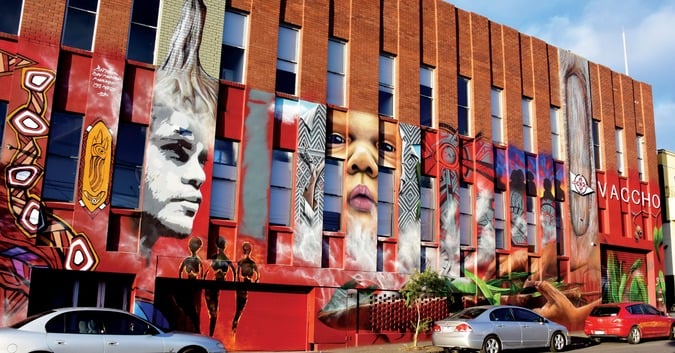