What does the changing media environment mean for health reporting?

The latest analysis of the state of the US news media was recently published by the Pew Research Center’s Project for Excellence in Journalism.

Amongst other things, it notes a continuing trend for technology giants to move into the news business. For example, as part of YouTube’s plans to become a producer of original television content, it is funding Reuters to produce original news shows.

But what does the changing news environment mean for health reporting?

Thanks to Angilee Shah and the Reporting on Health blog at the University of Southern California for allowing cross-posting of an article examining just this.

(And at the bottom of the post is a link to an article at The Conversation looking at trends in philanthropic funding of journalism. It is by Bill Birnbauer, who will be well known to many Croakey readers for his health-related investigations over the years.)

Are specialised sites and social media best placed to meet the appetite for health news?

This year’s State of the News Media report from the Pew Research Center’s Project for Excellence in Journalism leads with mobile content. It’s not surprising considering how prevalent mobile devices are.

But what is surprising is that this new publishing world of smartphones, tablets and laptops or desktops, is not just about the short stuff.

The proliferation of mobile devices, it turns out, could actually be spurring long-form journalism:

Mobile may be leading to a deeper experience with news than on the desktop/laptop computer. As sales of e-readers and tablet computers grow, PEJ’s early research has found consumers are reading more immersively on these devices than on earlier technology. New survey data released here add to that. More than a quarter of the population, 27%, now get news on mobile devices. And these mobile news consumers are even more likely to turn to news organizations directly, through apps and home pages, rather than search or recommendations — strengthening the bond with traditional brands. The evidence also suggests mobile is adding to, rather than replacing, people’s news consumption.

This reflects a trend that was discussed at SXSW Interactive in Austin last week. The Pew report also points out that more consumers in America are using all more than one device:

A new survey of more than 3,000 U.S. adults by the Pew Research Center’s Project for Excellence in Journalism finds that rather than gravitating toward one device, a growing number of Americans are becoming multiplatform digital news consumers. These “digital mavens” get news on all their devices — and even more so if they own all three types of devices. In other words, digital devices appear to be an additive experience.

Furthermore, a media brand’s reputation still has more weight than social media links, especially on mobile devices. This is not to discount the “rapid growth” of traffic generated by Facebook and Twitter – anyone who owns a web property can tell you how important those networks are to driving readers to their content. But the report does assert that social media is not the end-all news driver that many people thought it would become was last year. The networks play an additive role, rather than act as a replacement for visiting news sites.

What does all this mean for health content in the media? The report’s data shows that newspapers pay more attention to business, education and health than other news mediums, but newspapers are also suffering from the greatest revenue loss of all the sectors Pew reviewed.

Pew’s annual report features an interactive chart-maker, where you can choose your own variables to compare media coverage of stories and topics in 2011, as I’ve done here. Health and health care, it turns out, are getting less coverage than in 2010 across all media. Here are some numbers on topics in the newshole from 2011 and 2010. 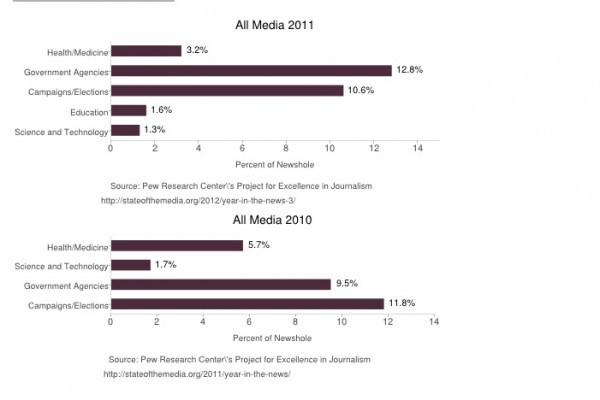 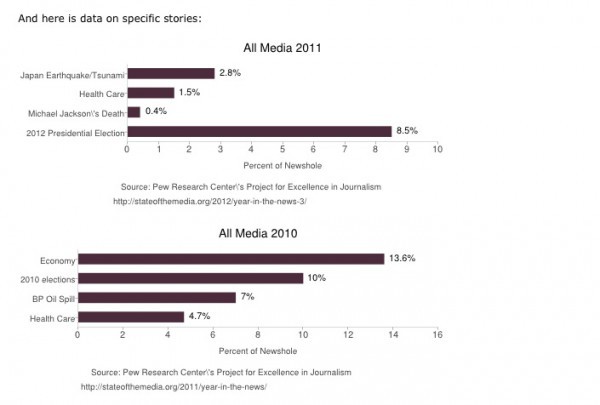 These findings are more consistent with Michael Remez’s State of the News Media section on community news, which points out that local, niche sites are faring well. Health News Florida is a strong example.

The data leaves me with more questions than answers.

Do news media have an opportunity to provide more health information to an audience hungry for that kind of news? Or do these numbers suggest that specialised sites and social media are better venues for health information?

• Angilee Shah is the community manager at ReportingonHealth.org, a place for discussion of how we get our health news and information.

• Related: Health Media Takeaways from the 2011 State of the Media Report

At The Conversation, Monash University journalism academic Bill Birnbauer explores the health of philanthropic funding of journalism in the US.

While there are now about 75 not-for-profit centres doing investigative and accountability reporting, the competition for foundation funding is intense and its long-term sustainability is far from certain, he writes.

Birnbauer suggests that the Australian university sector could play a greater role in supporting such ventures. (Predictably enough, Croakey would love to see such an operation focusing on health-related investigations.)

Birnbauer concludes his piece urging “Australian philanthropists to note the words of the US Federal Communications Commission report on The Information Needs of Communities that ‘without strong reporting, the issues that philanthropists care about – whether health, environment, children, fiscal responsibility – are all short-changed’.”

(Declaration: Birnbauer is a member of the Public Interest Journalism Foundation board).

Archie Roach: the great songman, tender and humble, who gave our people a voice

Vaccination, workforce and collaboration the key to reducing COVID-19 deaths in aged care