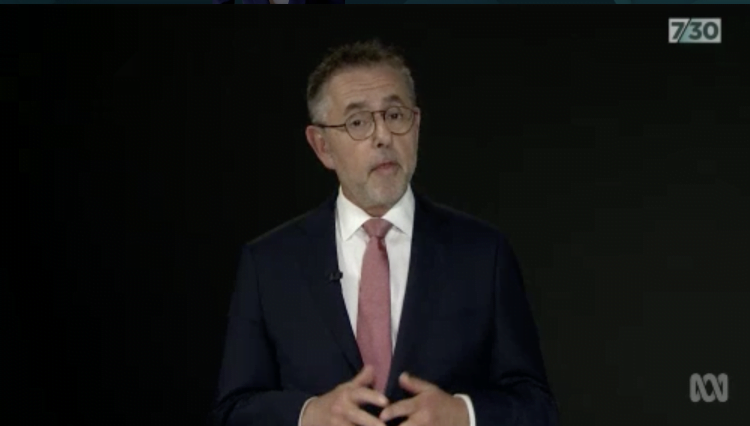 Australians turn to the ABC in an emergency: Dr Norman Swan (screenshot of 7.30 Report episode)

What does the crisis in Australia’s media mean for public health?

Introduction by Croakey: As with health and social policies, the COVID-19 pandemic has exposed fault lines in the Australian media environment, where public interest journalism is gravely at risk and regional and community media have all but disappeared.

This discussion highlighted the need for robust public policy and funding to respond to the crisis in Australian journalism and for public interest journalism to be recognised as a public good and a critical social determinant of health.

See this Twitter thread from the event by Croakey editor-in-chief Dr Melissa Sweet, who encouraged public health organisations to include a rating of various parties’ media policies in their election scorecards, including funding for the ABC and SBS and support for a more diverse media.

ABC broadcaster Norman Swan was not pulling any punches.

“Be under no illusion that independent news media are under threat in Australia,” he told a recent public health webinar on media coverage of the COVID-19 pandemic.

“It is at crisis level,” he said, describing some of the pressure he came under from the Federal Government and attacks from the Murdoch media when he challenged COVID-19 responses and science, including the early emerging concerns about the AstraZeneca vaccine.

It was yet another example of “truth being the first casualty of war”, Swan said on the dilemma for health and science journalists with a responsibility to hold authorities to account at a time of national emergency, where trust and transparency were critical but conflicted.

“The authorities were telling us what they wanted us to know, not what was really happening,” he said, recalling the “infamous week” in March 2020 when, despite the emerging threat of the coronavirus, the Prime Minister was still intending to go watch his favourite football team play and the Melbourne Grand Prix was ready to roar on.

But despite being personally accused by Murdoch’s News Ltd outlets of being a fraud and dishonest when he has criticised Australian COVID science and responses, Swan said the pandemic has seen Australians flock in huge numbers to trusted organisations like the ABC.

And Swan said he has detected a big growth in health literacy in Australians through the listener questions, acting like “a barometer of the nation”, that come in for the Coronacast podcast, which he co-hosts with Tegan Taylor.

The show’s early questions were focused on basic concerns: ‘how do you wash your hands properly?’ and ‘can I go to the pool?’ Now, he said, he’s sure he can use the term ‘spike protein’ and most of the audience gets it.

The Coronacast podcast was expected to only last for a few months at the beginning of the pandemic, he said. But it is still going strong, 18 months later, attracting more than 3.5 million unique downloads a month.

Swan said such success is why Murdoch’s News Limited “hates the ABC”, which sees similar surges in audiences during bushfires and other disasters.

“Whenever there is a crisis, the country abandons News Ltd and heads for the ABC,” he said.

Swan’s assessment of the trust in the public broadcaster was supported by research, covered previously at Croakey, which was presented at the webinar hosted by the Consumers Health Forum of Australia and Public Health Association of Australia.

Media trust finding a blip not a trend

Professor Kerry McCallum, Director of Canberra University’s News and Media Research Centre, said the project analysed more than 2.5 million distinct news items on COVID-19 in Australia between January and November 2020, across all media.

It showed that in the early days of the pandemic, Australians had “an insatiable appetite for news” and no topic in recent history had come close to the saturation coverage, she said.

At the same time, the Australian media “fulfilled its civic journalism” in the first part of the pandemic, acting as “loyal facilitators of public health messaging”, albeit largely by general and political reporters in the absence of specialist health journalists who were casualties of the media crisis.

But as the year dragged on and Melbourne went into its long second-wave lockdown, McCallum said the news became “more conflict focused”, reverting to “politics as usual” and where it was clear that some sections of the media were pursuing a politically driven campaign against some state premiers.

The damning news from the research was that a big rise in trust in the media, identified in the centre’s April 2020 study, “was a blip, not a trend”, and was pretty much negated in the 2021 research, she said. 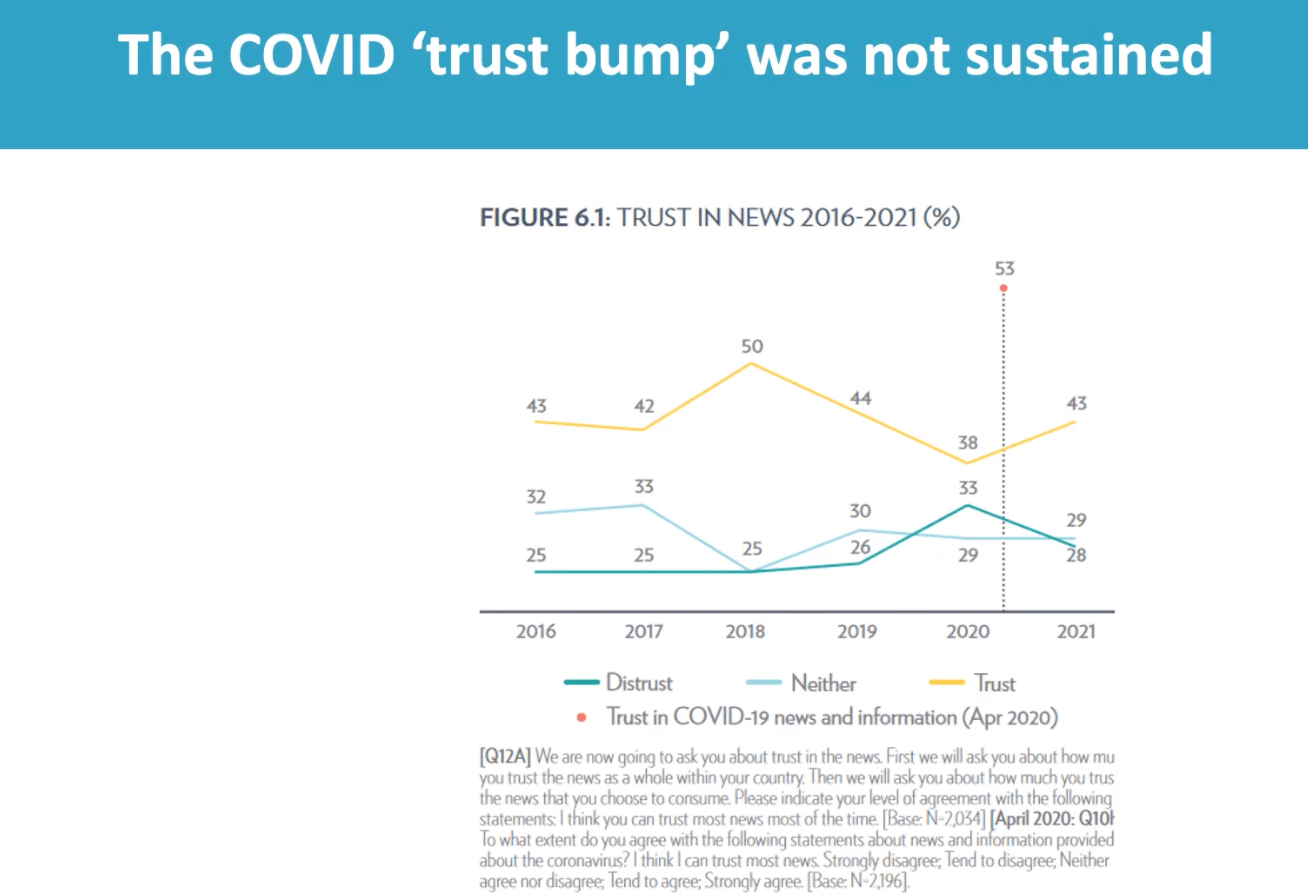 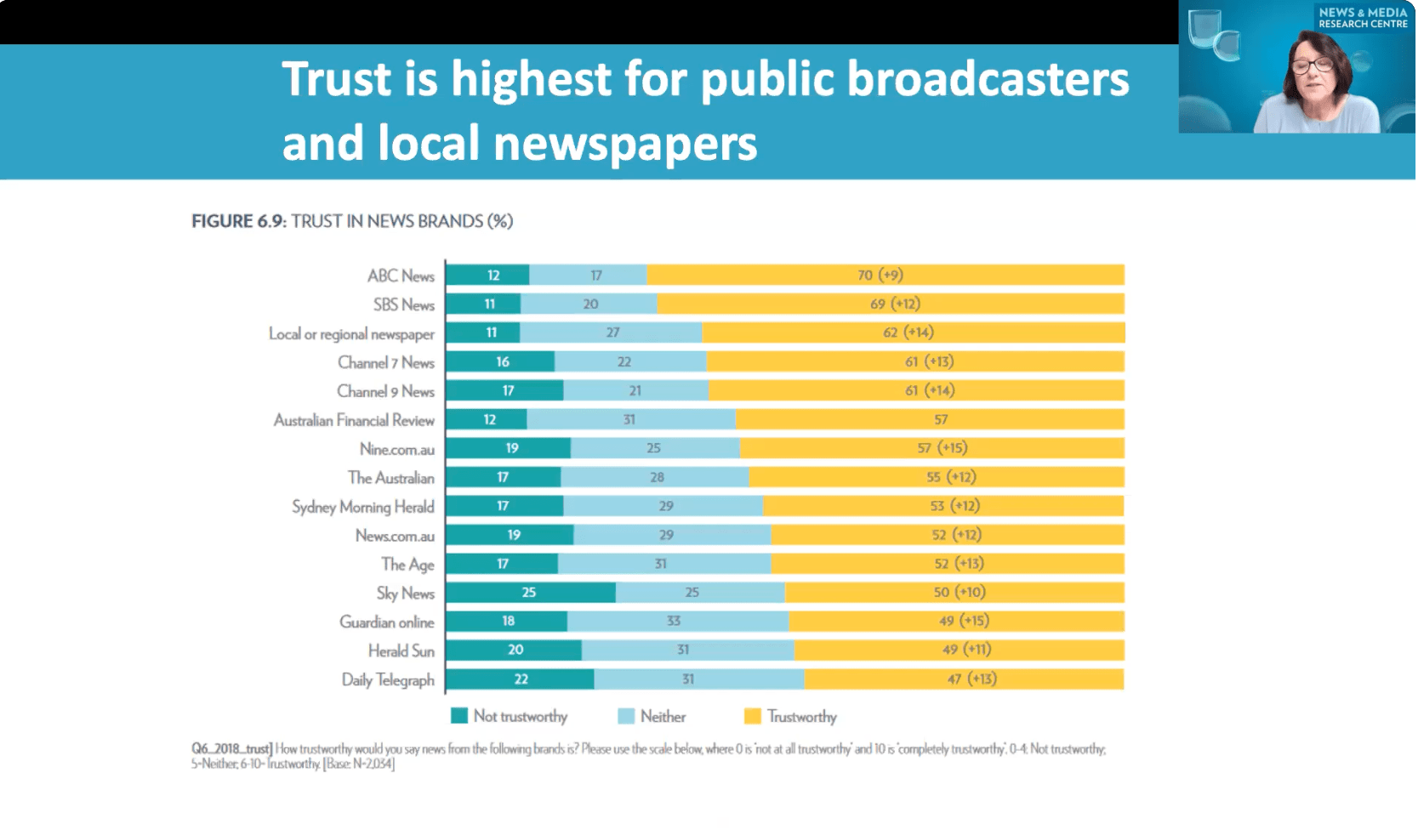 But they are also at risk, particularly the ABC from ongoing cuts to government funding and local news which is being battered as a business model, in the face of growing concentration of ownership and cannibalisation of revenue by the digital platforms.

A public good in a modern democracy

A new report, The Future of Work in Journalism, commissioned by the Media, Entertainment & Arts Alliance (MEAA) from the Centre for Future Work at The Australia Institute, argues that quality journalism is a ‘public good’ in a modern democracy, because of its importance in distributing reliable information (including on emergencies like COVID) to citizens.

It said the failure of private markets to sustainably deliver this — due to corporate concentration, unrestrained ‘free riding’ by Big Tech giants like Google and Facebook, and globalisation — means that governments have to step up, including through publicly-funded journalism, tax reforms, and stronger anti-trust regulations against the digital monopolies.

The report quotes a 2009 United States review of the condition and viability of the US media sector that “information is as vital to the healthy functioning of communities as clean air, safe streets, good schools, and public health”.

Releasing the report, MEAA Media federal president Marcus Strom said the study was clear that the slow erosion of Australian media over many years has taken its toll on public interest journalism and that failure to take dramatic steps now places our democracy at risk.

He said the crisis was most stark in the disappearance of dozens of outlets and hundreds of jobs from regional, rural and community media in the past few years.

“Local community and regional reporting has, in many places, disappeared altogether,” he said, adding that the media industry overall has been “savaged”.

The MEAA is calling on the Federal Government for:

The MEAA said the bargaining code, through which digital giants like Google and Facebook are expected to negotiate payments to news media, has not achieved the balance needed to promote public interest journalism. The union wants the confidential deals struck under the code to be disclosed, and dedicated funding provided to the small-to-medium media sector, which “has been treated with contempt by the major digital players”.

(Editor’s note: this echoes many of the concerns that Croakey has expressed on the bargaining codes — and we note we have a stake in the outcome: we have registered under the Code but have had no interest from Google and Facebook in negotiating.)

Facebook has also refused to engage with SBS and non-profit publisher The Conversation, prompting The Conversation editor Misha Ketchell last month to urge Treasurer Josh Frydenberg to “designate” the tech giant under the code to force it to negotiate payment for all publishers who genuinely serve the public interest.

So what does that mean for public health and democracy?

Webinar panellist and Croakey contributing editor Jennifer Doggett said COVID had revealed weaknesses and vulnerability in the media, as it did in health and politics, including a “lack of health literacy, particularly public health literacy, in the community”.

Doggett said the Federal Government did a “terrible job” communicating about COVID to the public at the beginning of the pandemic particularly. This forced people to really rely on the media, which was not always “up to the task”, partly due to the lack of specialist health expertise in journalism and the “news deserts” in rural and regional areas.

While social media has benefits for public interest journalism, including facilitating contact with experts across the globe, it is also a super spreader for disinformation that gives immense power to a few individuals, she said, citing research that a majority of COVID-19 anti-vaccine misinformation and conspiracy theories on social media originated from just 12 people.

Doggett called on public health and independent media advocates to see the media as a social determinant of health – just like other determinants such as education, poverty and employment – that can interrogate the power arrangements that exist in society.

She urged advocacy on the regulation of digital platforms, particularly on calls for stronger regulation on misinformation and disinformation, stable funding for not-for-profit and community media (possibly through a Big Tech tax) and for advocates to stand up for journalists when they are bullied or intimidated online.

Associate Professor Sanjaya Senanayake from the ANU Medical School also highlighted a professional benefit of speaking regularly to the media meant he stayed on top of the science around COVID in a way he might not have if not called upon to comment.

Self-confessed “spin doctor” John Flannery, formerly with the Australian Medical Association and now with the Healing Foundation, provided a report card for the webinar on the winners and losers on the public health front during COVID.

Flannery said the winners have included state and territory governments (trusted more than the Federal Government); medical experts like Swan; rising health literacy that he hoped will prevail beyond the pandemic, particularly in at risk communities; and the need for strong health policy, which he predicted would be on the agenda at the next federal election.

Losers have been the Federal Government; right-wing media and zealots whose credibility have been diminished; and people like the United Australia Party’s Clive Palmer and Craig Kelly who “have been made out to look like fools by peddling false hopes”. 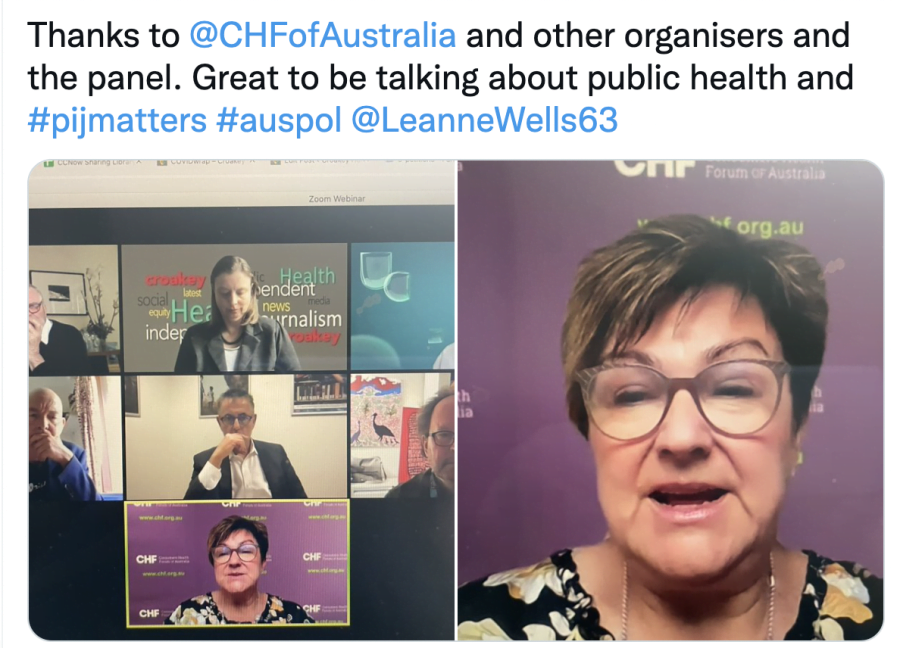 “Under the News Media Bargaining Code Google and Facebook have struck deals with a small number of media outlets. However, they have refused to negotiate with the majority of Australian news providers – including a range of high-quality outlets that meet the criteria set out in the Code. By publishing public interest journalism these providers fight misinformation and inject expertise into the media ecosystem. Only designation by the Treasurer can bring Facebook to the negotiation table.