What does the launch of MSF.TV say about the future of global health reporting?

Mainstream media outlets have diminishing resources and appetite for global heath coverage, according to a report released last year, Taking The Temperature: The Future of Global Health Journalism.

The report, published by the Kaiser Family Foundation in the US and written by two journalists, was based upon interviews with 51 people working in global health journalism, including reporters, editors and producers.

Amongst other things, it documented a move towards web-based outlets producing “a growing genre” of advocacy stories and research that tap into the power of social media. It said:

“…advocacy organizations have started to produce their own types of “news” that not only inform their constituencies, but in some cases have provided content for mainstream media. So while the flow of global health news may no longer be concentrated in the mainstream media, there is no shortage of information available for those who know where to look.”

But, in this era of convergence, is it journalism, advocacy, PR – or a mix of all of the above?

In the article below, James Nichols, Head of Communications at Médecins Sans Frontières Australia, provides some background to the new initiative.

MSF.TV –  DIY Humanitarian media is going where others don’t

Through daily news bulletins anchored by casual ABC journalist Sarah MacDonald, weekly panel discussions hosted by Julie McCrossin, and in-depth interviews carried out by journalists like Richard Morecroft and Monica Attard, MSF.TV is providing Australians with behind the scenes exclusives from our work across the globe.

People thirsty for international humanitarian news beyond the parochial interests of the mainstream Aussie media have now got an option, and they can engage too, using Twitter  #MSFTV and Facebook. 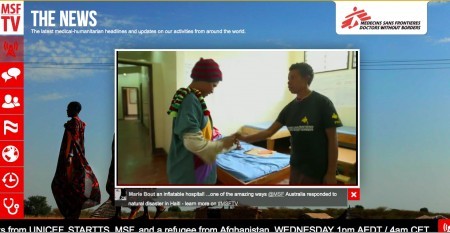 Headlines with the words ‘Syria conflict’, ‘Congo Ebola’, and ‘Sudan Kala Azar’ feature on the MSF.TV news channel to interested viewers, with seven channels that delve into the human side of crises, and the many aspects of the work we do around the world.

Australian and New Zealand doctors, nurses and non-medical field staff from Médecins Sans Frontières are interviewed without narration and with full honesty, reflecting openly on the hardships and challenges of delivering medical aid.

To get a real sense of what life is like in the field the channel is full of everyday people, like the wonderful salt-of-the-earth Sally Thomas, a construction logistician who spent months building a hospital in Haiti following the massive earthquake.

As an organisation, we don’t often resort to what our French colleagues describe as ‘crying stories’, but it’s hard not to be moved by Heidi Spillane, a GP from Byron Bay, speaking about a pregnant Chinese woman who she was treating for HIV, who had become partially blind and was abandoned by her family. Heidi, like so many our MSF staff is moved by the resilience of her patient who has lost everything apart from the will to live.

These stories are balanced with hard news about current events that the organisation is faced with in more than 60 countries around the world – events you wouldn’t ever hear about otherwise. Our editorial team in Sydney is delving into internal reports and briefings that are circulated within the organisation but usually closely guarded from external eyes.

This information offers a candid view of what happens in the field that isn’t often conveyed in public. It harks to Médecins Sans Frontières’ ethos of speaking out, and its refusal to remain silent in the face of humanitarian disaster affecting real people.

You may ask whether this is PR or a slick money making ploy?

‘Yes and no’ is the short answer – but most importantly MSF.TV is about raising the consciousness of Australians when it comes to complex, foreign humanitarian issues in far flung places. The service is a platform that invites our target audiences: key opinion formers for our sector, people who give money for international aid, and potential aid workers.

It’s an invitation to consider Médecins Sans Frontières as a viable alternative for your thoughts, opinions, and possible donations and for your valuable time – we really do want people to think about working for us in the field.

Sending film crews to South Sudan and Papua New Guinea as well as preparing daily studio content has meant long days with a team of dedicated people, and the willingness of our field colleagues to participate.

We have a strong executive team in the Sydney office which has been engaged in the development, delivery and monitoring of the project from go to woe, with support from the Board of Directors of Médecins Sans Frontières Australia who have been intimately involved to ensure that we remain accountable to our clients: the patients.

Being an independent aid organisation that bases its acts on humanitarian principles – independence, neutrality and impartiality – has meant that we’re also quite particular in the way we want to present ourselves.  Justifying what we’re doing is just as hard because we can’t undermine Médecins Sans Frontières core charter: delivering emergency medical care to those who need it most.

Finally, the structure of the project has meant that we are able to maintain editorial independence – even from our partners in the Médecins Sans Frontières movement, such as in Paris and Geneva.

A strong understanding about our operations and the necessary limitations of communicating around some of these issues means that we’re able to deliver news that is reliable, credible, and trustworthy. In other words the news on MSF.TV is not spin, it’s real.

To determine the success of MSF.TV, we’re measuring the project based on number of visitors to the site, the level of social media engagement and the audience reach of the accompanying PR effort.