What does the Mental Health Council of Australia think of the direction of welfare reforms? 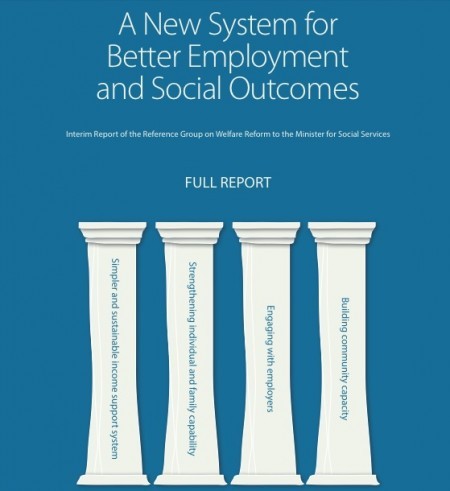 (Update: A response to this post from the Mental Health Council of Australia was added on July 1 – see bottom of post).

The McClure Review’s release of its interim report on welfare reform is likely to be causing anxiety for many of those affected by mental illness, especially in view of headlines like this, Mentally ill people could lose disability support pension in welfare overhaul.

Can the Mental Health Council of Australia advocate frankly and fearlessly on its constituents’ behalf when its chair Jennifer Westacott is representing the interests of the business community?

A health policy analyst, who wishes to remain anonymous, raises this question – and others – in the article below.

Conflict and confusion in the mental health sector

In her BCA guise, Ms Westacott has welcomed Kevin Andrews’ review into the welfare system, noting that it is “increasingly important our welfare system is … encouraging people who are able to work to do so, or at least to look for work.”

It’s not clear if the Mental Health Council supports the views of its Chair, but when the MHCA released its landmark report into employment and mental health (Let’s Get To Work), it identified a number of recommendations and models to increase employment for people with chronic and episodic mental health problems.

Kicking them off the DSP wasn’t one of the proposals!

Anyone who understands the episodic nature of certain health problems understands that looking for and finding work is no simple matter.

The MHCA’s own report noted that people with mental health problems, like those with a disability, want to work.  They’re crying out for work.  And it’s not their fault they can’t get work.

There are so many questions to put to Australian businesses and the government about these proposals, but a useful starting point might be to look at the conditions for politicians with mental health problems and compare them to what the rest of the Australian workforce experiences.

Double standards
Not so long ago, a senior Government minister bravely spoke publicly about their mental health problems and stood aside from their duties – on full pay – while they sought better treatment.

It takes a lot of guts to be a public figure and talk about your mental health; and it also takes compassion and consideration from colleagues and employers to understand and support someone experiencing episodic mental health problems.

But here’s the double standard.  MPs don’t require medical certificates.  They don’t have to find a GP (and shell out a co-payment!) who is trained in mental health and can provide the necessary diagnosis and paperwork so they can retain their job and income.

Unlike the rest of us, MPs don’t have to explain the multiple visits to doctors, psychologist or specialists to their boss or HR person.  But their staff do.

I wonder how many members of the current and previous governments employ people with episodic mental health problems and how they react when someone is absent during sitting weeks or budget time?

But we do know that people with episodic mental health problems will be put through the ringer.

Last week I met a young woman with mental health problems who was applying for the DSP.  She told me the Centrelink worker ‘pushed her buttons’ to see just how ‘unwell’ she was.

Here was a young woman, with a range of health problems that are episodic, and who has struggled in the workplace because of this; and yet she has to ‘prove’ she’s mad, or mad enough, in order for a government to help her until she is resilient enough to be able to resume working.

This young person has ‘learned’ and ‘earned’, she just couldn’t find a boss willing and able to construct a working environment that was adaptable to her health needs.

What’s the BCA saying about this?

And while the BCA is welcoming these changes, perhaps they can tell us what assistance employers and business will receive to help them manage the episodic mental health needs of employees?

Where should employers and businesses go to seek information about managing the mental health of their employees? Is there a hotline, a help desk staffed by workplace psychologists and the like to assist employers?  Do bosses, supervisors, managers and HR departments understand what ‘episodic’ means and how it manifests?

Will a worker be fired if they are absent and can’t produce a certificate from a doctor?

And more concerning, what happens if they present as ‘well’ to a doctor after an episode – no dole for you young lady, you’re obviously a rorter…

• The Interim Report has been released for comment. Submissions are due 8 August 2014. For more information on how to make a submission, go to Make a submission. 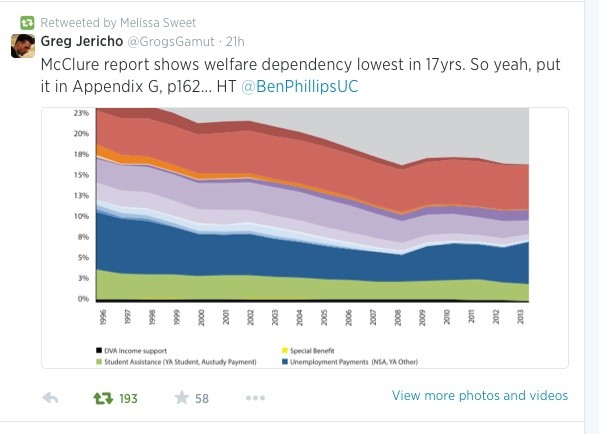 By Frank Quinlan, CEO of the Mental Health Council of Australia

I can understand why Croakey’s anonymous “health policy analyst” expressed the desire to remain anonymous.

If the anonymous analyst had read the MHCA’s much publicised submission to the National Mental Health Commission’s current Review of Mental Health Services and Programs, when it was published the week before the McClure Report’s release, they would have read:

It is critical that the Government’s response to the McClure Review of the Welfare System includes reforms that appropriately recognise the significant impacts of mental illness on functional capacity to work, including the fluctuating and unpredictable nature of those impacts.

Many people with mental illness receiving the Disability Support Pension want to work (or work more), but we currently have neither a welfare system which encourages entry into the labour market nor employer attitudes that sufficiently value the contribution people experiencing mental illness can make in well-structured jobs.

If the anonymous analyst had also read the MHCA’s recent response published on the ABC’s website to the hysterical attacks on DSP recipients on the front page of the Daily Telegraph, they would have seen this quote from me:

Many people with mental illness want to work, and the economy needs them to work. Currently our payments system, our system of employment assistance, and our attitudes towards those who experience mental illness all conspire to make it difficult for people to move off the DSP even when they are willing and able to do so.

Indeed, if the anonymous analyst had bothered to read the BCA’s response to the recent budget, or its response to the McClure report, or note its campaign with ACOSS and others to increase the rate of the Newstart allowance, they might have formed the view, as we have, that real reform requires all sectors of society – business, civil society and government to work together

It is the MHCA’s position that we desperately need reform. We welcome the opportunity to have a considered and careful discussion about what welfare reform in Australia should look like; an opportunity that the publication of the McClure Interim Report now brings.

The MHCA will continue to work with our members, stakeholders and allies to analyse papers like the McClure report and to propose policy solutions to government that will bring meaningful improvement to the lives of people who experience mental illness, and those who care for them.

PostScript from MHCA – Links to some of the material mentioned above