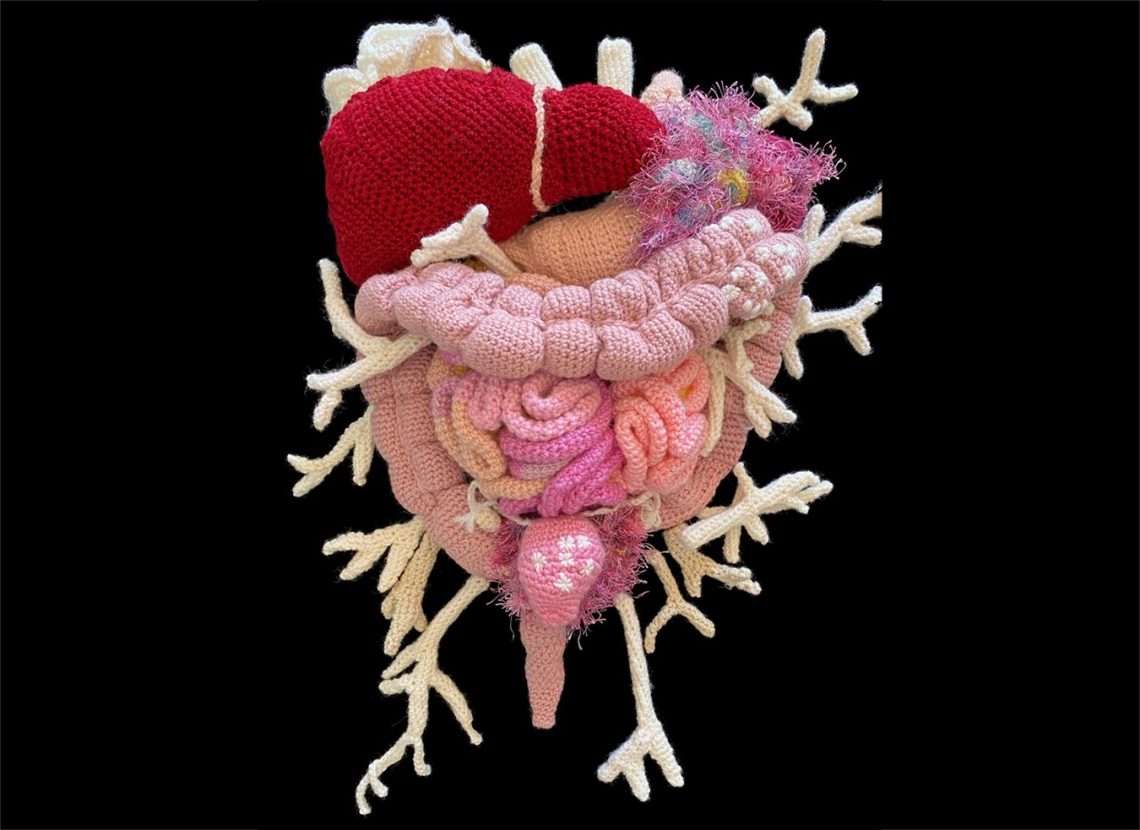 Tracy Sorensen crocheted life-size representations of her organs that were threatened by cancer. Image supplied by Tracy Sorensen.

What does the uterus really think about the colon?

Introduction by Croakey: Art meets science in a writer-in-residence program at the Charles Perkins Centre in Sydney, which takes a multidisciplinary approach to chronic disease and encourages unexpected collaborations.

When writer Tracy Sorensen started her residency last year she decided to “get to know her organs” and develop a cancer memoir from the viewpoint of the organs themselves, asking questions like “What does a spleen actually do when it’s at home?”

The Judy Harris Writer in Residence program at the Charles Perkins Centre is one of the most generous in the country, providing the author with $100,000 and access to medical and scientific researchers. The authors create narrative works that combine scientific research with creative expression.

In this article below, Sorensen relates her experience collaborating with leading Australian scientists.

When I was in primary school, a teacher held up a wooden ruler and said it was full of tiny jiggling atoms. Jiggling because each atom had electrons whirring around its nucleus, like planets around a sun. It wasn’t just the ruler. Everything we could see was likewise made up of whirring atoms. My young mind was officially blown.

I loved science then, but it was a law of diminishing returns thereafter. I found maths unbearably dull, and my high school class played up really badly when let loose on the chemicals and Bunsen burners. By Year 10, I was a confirmed humanities gal.

I came to see the material world not with awe, as I did as a child, but as the mere bedrock, or perhaps venue, for the only game in town: human culture.

That worked for me, more or less, until I was diagnosed with advanced primary peritoneal cancer some decades later. With the very material of my body threatened, I finally got a visceral sense of its importance. As the specialists spoke of my spleen and pancreas, I realised I wasn’t entirely sure where they were located in my own abdomen, or what they did. I had no idea what the peritoneum was, or the greater omentum, or the grandly named Pouch of Douglas.

I began to Google, not so much to find out about treatments and prognoses – I was going to leave that to the experts – but to simply acquaint myself with all that I had taken for granted, all that I’d not bothered to know. I crocheted soft, stuffed, life-sized representations of each threatened organ.

They could be arranged in position on the table in front of me, or moved about as I explained my illness and treatment to family and friends. It was a way of getting to know them, of finally acknowledging and thanking them.

I survived my year of chemo and surgery, albeit with a reduced organ count, and began to write about the experience. I wasn’t so interested in writing from “my” point of view, but from a radically different angle: I wanted to write a cancer memoir from the point of view of those lively, hard-working, used and abused organs I was only just getting to know. They would tell their own stories in their own words.

At first, I worked from literary tropes: the stomach is greedy, the gall bladder full of bile, the spleen rageful. How might they respond to two growing tumours? But I soon wanted to go beyond cultural archetypes; I wanted to dive into organ tissue itself. What does a spleen actually do when it’s at home?

As I was thinking this through, and trying to catch up on some high school biology, I heard about the Writer in Residence program at the Charles Perkins Centre (CPC).

The CPC is based in a swish new building on the campus of the University of Sydney near Royal Prince Alfred Hospital in Camperdown. Its charter is to take a genuinely multidisciplinary approach to human health, particularly in regards to diabetes, obesity and cardiovascular disease.

Chronic diseases such as these are viewed not as medical conditions but as “hyper complex problems” taking in not just cutting edge science but mental health, education, social inequality, urban design and the industrial food industry, among others. To this end, the CPC puts researchers working all these angles in the one building, encouraging unexpected collaborations.

By installing a creative writer on the second floor, the CPC has added a pinch of imagination and a teaspoon of fabulation to the mix.

Supported since its inception in 2016 by one private benefactor, Judy Harris, it has so far provided five Australian writers – Charlotte Wood, Alana Valentine, Mireille Juchau, Emily Maguire and me – the 2021 equivalent of Virginia Woolf’s “five hundred pounds and a room of one’s own”. The opportunity to be paid to do nothing but think, read, write and share ideas for a whole year is every writer’s dream.

Published outputs so far include Alana Valentine’s 2019 play Made to Measure about obesity; Charlotte Wood’s 2020 novel The Weekend, about ageing; and Emily Maguire’s recently launched novel Love Objects, about hoarding. Others are coming down the line.

A cast of organs

I arrived in December 2019 with the beginnings of a manuscript tentatively called The Pouch of Douglas. I settled in to my office – my name on the door! – and started making lists of researchers who might be able to tell me more about the cast of abdominal organs that would appear in my novel: spleen, pancreas, colon, uterus, greater omentum, peritoneum, liver, and others.

In early 2020, just as I was getting used to my new workplace, COVID-19 hit. The “in residence” part of the gig suddenly fell away. The room on the second floor sat empty for a good six months. It was disappointing, but by Zooming in from my home in Bathurst, I was still able to be part of the working life of the CPC.

I attended scientific seminars in which I understood only the first slide (the introduction to the problem) and almost nothing thereafter. And yet, cumulatively, I came to understand a little more about multicellular life (that’s us).

Via Zoom and a few in-person, socially-distanced conversations, I was able to speak one-on-one with some of this country’s leading scientists.

The researchers were mostly eager to spend a bit of time in the creative play-pen with me. What does the uterus think of the colon? I asked academic gynaecologist Professor Kirsten Black. “She thinks he’s a bit blokey,” she answered.

“What microorganism would be involved in gas and bloat?” I asked gut microbiome researcher Associate Professor Andrew Holmes. He suggested the methane-producing Methanobrevibacter smithii. He told me about how the gut microbiome is a dynamic thing, with organisms pushing and responding to being pushed.

Gradually, a new sensibility grew in me. I’d come to the Charles Perkins Centre armed – literally – with my bag of crocheted guts. I’d thought of them as discrete entities, characters that would introduce themselves and their functions in turn, something like Joe’s organs in the old Readers Digest series by J. D. Ratcliff. (“I am Joe’s pancreas”, “I am Joe’s liver”.)

As my year at the CPC wore on, I developed a sense of the organs as entities in continuous “conversation” with each other, often working things out between themselves, mostly leaving the “top brain” out of the discussion. I’d been worried about how seemingly stationary organs in a confined place could have enough sense of movement and agency to sustain a whole novel. That seems laughable now: movement and agency is what they’re all about.

To give you a tiny preview, here are the opening words of my novel, which I’m now calling Organs: A cancer memoir:

I am Tracy’s Greater Omentum.

Not everyone believes in Tracy, but I do.

Rage, our spleen, rolls his eyes, says I’m pious. Says there is no material evidence for Tracy. Sometimes, when we’re all arguing late at night, during Rest and Digest, he’ll say: where is this Tracy?

I agree that she’s not something you can put your finger on – if you had fingers – but I sense Her presence all around.

“She is an illusion”, says Rage, and retreats into his cave for a joint. He signals for Panno to join him, but Panno is stuck to his gaming chair, firing enzymes at fats. “Maybe later bro,” he says.