What is overdiagnosed cancer? And why does it matter?

One of the four areas of focus for development of the new National Preventive Health Strategy is “current and emerging opportunities in cancer and chronic disease population screening”, and Health Minister Greg Hunt has sought advice on whether a lung cancer screening program should be introduced.

It is timely to consider the complexities and dilemmas of screening programs, which often involve more risks than is widely appreciated.

Evidence-based medicine expert Professor Paul Glasziou cautions in the article below that patients, doctors and Health Ministers must understand the limitations of screening “if we are to avoid an epidemic of overdiagnosis”.

His article is published as part of an ongoing series, TOO MUCH of a Good Thing, that investigates how to reduce overdiagnosis and overtreatment in Australia and globally. It is published as a collaboration between Wiser Healthcare and Croakey.

“Cancer” may be a single word, but it is not a single disease. Cancer’s behaviour varies vastly: from slow growing or even dormant clumps of abnormal cells to the very aggressive tumours that can spread and be fatal in a few months.

In the last few decades we’ve learned that the dormant and slow growing types are much more common than we thought. And that we don’t really know what to do about them.

Many prostate cancers fall into this slow growing category.

Consider Andrew’s story (as told here): at age 45 he had a PSA test that was a bit high, so he proceeded to have a prostate biopsy (a needle into the prostate to sample the tissue), which showed a low grade cancer. He was told it would be fatal without surgery.

But, against advice, he decided not to have any treatment.

Twenty-one years later (now aged 66) he has never had treatment, and is alive with no prostate symptoms.

He said: “It is time men became brave. If they have fallen into the trap of testing, then they must study the real statistics and realise that despite the word ‘cancer’, this disease is highly unlikely to kill you.”

But of course, there are aggressive prostate cancers also, and doctors and scientists can’t reliably distinguish between the slow growing (like Andrew’s) and the aggressive types.

That can mean many men being hurt by treatments for disease that doesn’t matter, to try to save very few men with aggressive disease.

From autopsy studies of men who have died from other causes (so, not prostate cancer but from heart attacks, accidents etc), we know many have dormant and undetected prostate “cancers” (we should probably use a different name for these abnormalities, such as “borderline epithelial neoplasm”) – around 50 percent of men by the age of 70 years (see figure below).

Those men were certainly better off not having their prostate cancer detected before they died of something else.

We recently tried to estimate how many Australian men are now being diagnosed with ‘prostate cancer’ when in fact they have a dormant or slow growing prostate tumour.

To do this, we made a comparison between 1982, when men weren’t being tested for prostate cancer, and 2012, when about half of Australian men over 65 were being tested.

Critically, the death rate from prostate cancer in 2012 is no worse than in 1982, so extra diagnoses in 2012 were likely to be cancers that would never have become symptomatic.

We found that 41 percent of currently detected prostate cancers would never have become apparent in 1982 – they were “overdiagnosed”.

That means around 8,000 men per year in Australia are diagnosed and treated for something that never would have become a problem.

If they had lived in 1982, these 8000 men a year would not have been given a PSA test, and would have lived out their entire lives never knowing that they had ‘prostate cancer’, and never experiencing any symptoms.

The figure below sets out these numbers: over the lifetime of 100 men, over 50 will develop cell changes that will look like prostate cancer, but only 12 of those men would ever develop symptoms.

Of the other 38 men who develop cell changes that look like prostate cancer, PSA screening detects 8 extra men (in 2012) with dormant cancers that never would have caused a problem, while 30 more could have a ‘cancer’ detected at autopsy but never would have had symptoms. 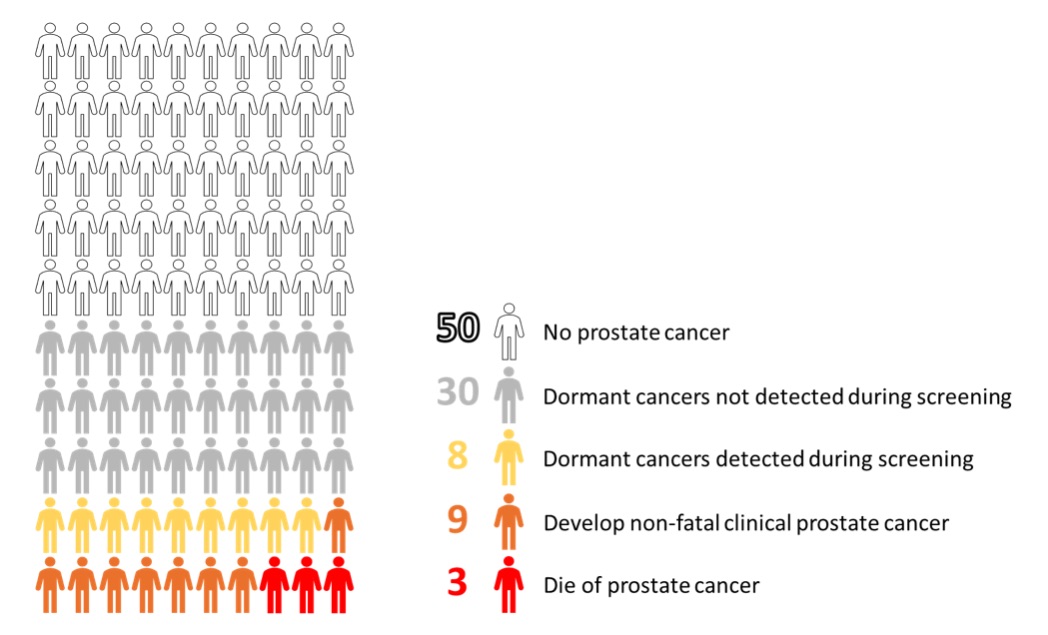 As you might guess, this all creates a dilemma for screening.

Screening is no guarantee of saving the 3 in 100 – the large trials suggest repeated screening might save fewer than 1 of the 3 men who would otherwise die (but the evidence on this is uncertain), but we will also overdetect and treat men with surgery and/or radiation who never would have had a problem.

A few years ago we asked a community “jury” of men – who spent a weekend going over the pros and cons – whether Australia should have a prostate screening program.

They said “no”, but that we should better inform GPs so they can inform their male patients about these pros and cons, so the men can make up their own minds.

The problem of overdetection is not just for prostate cancer, but is the Achilles heel of many cancer screening programs.

Thyroid, lung, and breast cancer screening all have a similar problem – though perhaps to a lesser degree than prostate cancer.

This is why many professional bodies, such as the Royal Australian College of General Practitioners, are cautious about screening recommendations.

Their preventive guidelines require clear evidence of benefits that would outweigh any downsides such as overdiagnosis. That leaves only a handful of conditions that are routinely worth screening for.

Counter to media messages and commonly held belief, earlier is not necessarily better. Timely diagnosis is to be encouraged, but pushing for earlier diagnosis can open a Pandora’s box of “abnormalities” whose behaviour and consequences we don’t understand well enough.

But once detected – as with Andrew – patients are left with the dilemma of constant anxiety or potentially unnecessary surgery and other treatments with side effects worse than the condition itself.

“Early is not necessarily better” may be out of kilter with common beliefs, but patients, doctors, and Health Ministers must understand this evidence, and the limitations of screening if we are to avoid an epidemic of overdiagnosis.

• Wiser Healthcare is hosting the 7th international Preventing Overdiagnosis scientific conference in Sydney, 5-7 December 2019. The conference is co-sponsored by the World Health Organization, and brings world experts to our shores to grapple with this intractable problem. See here for more information and to register.

• Professor Paul Glasziou is director of the Institute for Evidence-Based Healthcare at Bond University.

PrevPreviousClimate Emergency declarations are the first step: here’s what comes next
NextAvoiding ‘Othering’: How should disability policy be established with Indigenous people?Next