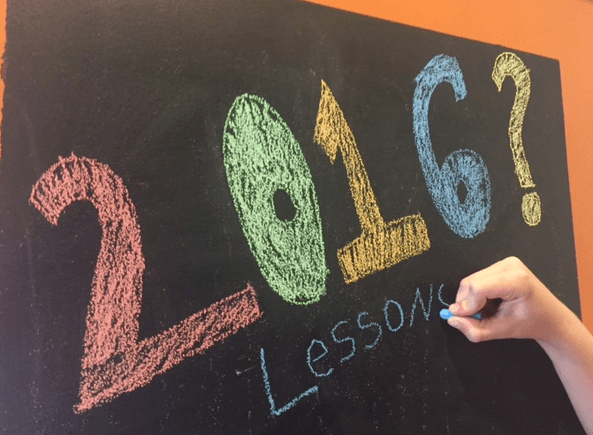 What is the most important thing you learnt in 2016?

Don’t miss the first post: 2016 going on 2017: what were the standout events and what will they mean for our health?

What is the most important thing you learnt in 2016?

Bronwyn Carlson, Associate Professor in Indigenous Studies, Faculty of Law, Humanities and Arts at the University of Wollongong

ortunate enough to attend the Global Solidarity Symposium held at the university at Albany. It was wonderful to be around so many Indigenous people from all over the world. What became very apparent was that we all face similar challenges. Suicide was spoken about by most and sadly the rates of suicide in most Indigenous communities was extremely high. What I did learn however, is that Indigenous people are really resilient (we have to be really).

The value and importance of collaboration and the wonderful opportunities that arise from building and maintaining strong relationships with medical colleges and universities. 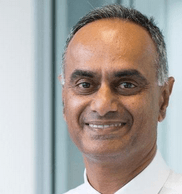 Don’t forget your own history. I fear the UK has forgotten the history of Europe, and the massive difference the EU has made in the last 70 years. And the US has thrown aside the preconditions of democracy (civility, respect, truth-telling etc.). Australia? We’re in danger of forgetting we’re a nation of first peoples and migrants.

Likewise political positions are along a continuum, along multiple axes. Historic references to left and right are now barely relevant. All sides and all axes may have valuable contributions. All sides have demonstrated disrespect, close-mindedness and rudeness. It is so easy to overlook these from people we agree with.

Sustainable Development Goals demand action from every country, especially wealthier countries. Goals include clean energy, reduced inequalities, sustainable cities, responsible consumption and production, climate action, peace, justice and strong institutions. We have much to learn from countries of the global south, and from many Indigenous communities, who are much closer to these than Australia: Ethiopa – leading the way on carbon emissions, Bhutan measuring progress through the Gross National Happiness index.

Boundaries between developed and developing countries, poor and rich, democracy and non-democratic are also disrupted. The US election was no more evidence of democracy than farcical re-elections of African leaders. Indefinite detention of refugees, torture of children, and scientific illiteracy in our leaders in Australia show we cannot assume that we live in a democracy.

I’ve learnt to have the courage to call out racism, even when it issues from the mouths of people I love and care about.

Expect the unexpected and make the most of now. And that running the New York marathon is all it’s cracked up to be!

There is hope for prevention! As outlined previously at Croakey in Chronic disease prevention: pinning our hopes on the NSFCC, despite our lack of significant progress tackling chronic diseases to date, I’m buoyed by the recent progress in Victoria around the issue of family violence, where the focus has expanded beyond improving crisis responses to include stopping family violence from happening in the first place.

The Royal Commission into Family Violence report released on 30 March 2016 acknowledged that “we need to give as much attention to prevention as we do to the other parts of the family violence system” (p38). The Andrews Government committed to implementing all 227 recommendations, including the establishment of a new independent statutory agency to oversee the prevention of family violence and the creation of a long-term prevention strategy. This is heartening proof of the government’s commitment to tackle family violence, and proof also that policy makers are able to see the value of prevention and make a long-term commitment to resource it.”

To take the word ‘busy’ out of my vocabulary and realise I choose to do everything I do.

I also learnt something profound this year about the lock hospitals in Western Australia and Queensland, that point further to the incidence and impact of harmful health care policies, systems and practices for Aboriginal and Torres Strait Islander people since colonisation.

I learned our fragile but essential quest for Aboriginal advancement will not succeed unless non-Aboriginal people work differently: instead of impatiently bringing our own solution to the table, let’s listen more and promise to dialogue. How did I learn this?  There has been no better example in 2016 than the leadership of Nyamba Buru Yawuru in conceptualising, quantifying and completing its own health and wellbeing research unveiled at a large community forum in August 2016.  Accountability back to community was fundamental – as are the consequences of the research when used in Aboriginal hands to trend the impact of native title.  It’s visionary!

The decision to speak out or whistle-blow may seem easy, but when doing so could be career ending, it does take on a different significance…

That I have a lot to learn.

During 2016, we’ve put a lot of effort into developing collaborative relationships and working closely with other health leaders to progress our work.  Our voices in health advocacy are multiplied by our partnerships, and all of us at AHHA have valued greatly the generosity and commitment of our colleagues across the health sector to promoting a strong health system for Australia. But as can be seen from election results, both in Australia and internationally, politics is a fickle game and health leaders must always be on the front foot to ensure that the excellent healthcare we have in Australia is not compromised by short-term and ill-considered political interests.

We’re short of leaders nationally and internationally who can inspire humanity to learn to live together in a global community.

This year I was fortunate to learn from a couple of people and deepen my understanding of the issues facing Aboriginal and Torres Strait Islander people in Australia, and the social and political actions that Indigenous leaders and communities are taking to tackle these issues.

Sharon Friel, Professor of Health Equity and Director of the School of Regulation and Global Governance at the ANU

Never take anything for granted! See answer to Q1.

That seemingly good people can do very bad things; that one should learn from history; that the planet is not in good shape or in good hands.

Professor Fran Baum, Professor of Public Health and Director of the Southgate Institute of Health, Society and Equity at Flinders University.

The ying and yang of life: the dark and the light, the love and the hate, the open and the closed, sorrow and joy, happy and sad are always there for us. In 2016 the dark side has come to dominate and now more than ever we need in our individual and collective lives to strive for the light, love, openness, joy and happiness.

Life is short. Keep doing the things that make a difference and that you enjoy. Keep putting people first.

Health organisations and government increasingly mention the importance of the health consumer and of putting people first, but getting the action to reflect the words remains a big challenge.

Walking 25 kilometres a day in the beautiful French countryside puts everything in the right perspective. 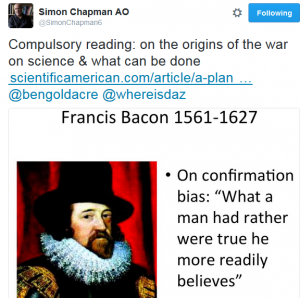 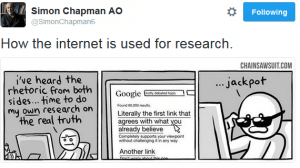 That recognition of confirmation bias extends at least as far back as Francis Bacon (1561-1627) who noted that “What a man had rather were true he more readily believes.” See A Plan to Defend against the War on Science.

Everything in the #JustJustice book. Thanks Croakey.

How to run education events that are interactive and collaborative.

The power of a coordinated group of people operating in a collegiate manner.

PrevPrevious2016 going on 2017: what were the standout events & what will they mean for our health?
NextCroakeyEXPLORE: In the footsteps of Robert Louis Stevenson and ModestineNext