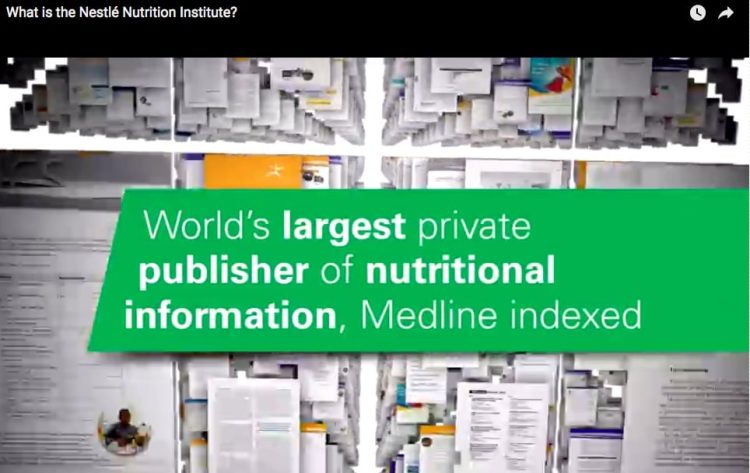 What is the role of nutrition research in undermining public health policy?

As a food governance conference in Sydney this week puts the focus on the policy dominance of corporate interests, new research suggests that these interests are also influencing research outcomes.

In this latest installment of his Naked Doctor column, Dr Justin Coleman writes that nutritional science is “a conflicted mess”.

And beneath his article, check out the view from behind the front-lines with an industry “fighting a coordinated war against public health policy on on many fronts”.

An Australian systematic review has highlighted the hold that industry sponsorship has over the dietary health advice that doctors read, and pass on to patients.

The study in this week’s JAMA Internal Medicine claims food companies use tactics similar to those of the tobacco industry to influence research.

“Industry sponsors can influence the outcomes of a study in many ways, including the framing of the research questions, the design and conduct of the study, selective reporting of results, and ‘spin’ on conclusions,” say the researchers.

The University of Sydney researchers include Nicholas Chartres, Dr Alice Fabbri and Professor Lisa Bero, who was recently in the headlines after revelations of Coca-Cola’s secret plans to monitor the outcomes of her research.

The science of nutrition is a conflicted mess. One of the difficulties the authors faced in reaching statistical significance was that most studies are sponsored.

For every article you read by an independent nutritionist – Australia’s Rosemary Stanton is a shining example – many more have industry ties, if you dig hard enough.

For example, a previous review of all 206 published articles over a 6-year period about the health effects of soft drink, milk and juice found only half declared whether they were sponsored, and not a single one of the sponsored studies produced unfavourable health conclusions.

In the US, Coca Cola and Pepsi sponsor 96 health groups, including the American Heart Association and the American Diabetes Association. They have actively lobbied against 29 government health bills since 2011. Last month it was revealed they paid dietitians to tweet against the new soda tax.

Despite being written by scientists, its promotion of a high-meat diet was debunked by – who else? – Rosemary Stanton, who points out that the research behind the fad was sponsored by the meat and livestock industry.

The Dietitians Association of Australia, our peak body for dietary guidelines and continuing professional development of dietitians, is sponsored by a feast of food industry groups, including Nestlé, Meat and Livestock Australia, Arnott’s and Nutricia.

And who could forget the Senator Fiona Nash scandal of 2014, when her chief of staff was forced to resign due to a food lobby group? The minister’s office took down the ‘healthy star rating’ food labelling system, three years in the making, within hours of its website launch. It was later reinstated.

Nutritional research and publication is conflicted to the point that the public – and their dietitians and doctors – have a hard time distinguishing evidence from spin.

A basic step is insisting on transparency. No reader should have to guess whether research authors have financial conflicts of interest. The pharmaceutical industry has gradually improved transparency because of external pressure—let’s ensure nutritional publications follow suit.

And health organisations that accept sponsorship, particularly from manufacturers of highly processed foods and drinks, should encourage debate from within their ranks as to its merits.

The flow of money undoubtedly allows the delivery of more health education streams, but downriver the eddies become murky, and health consumers risk getting caught up in the spin.

Read the back editions of Naked Doctor here.

• This is a lightly edited version of an article that first appeared at Medical Observer, and is republished here with thanks and permission.

Behind the front-lines of “a war on public health”

Meanwhile, it’s clear from recent leaked Coca-Cola emails that spinning research is only one of many strategies used by the junk food and drink industry to defend profits.

Ninjas for Health, a network of innovators “who have big ideas for keeping health out of the hospital”, says that Coca-Cola’s leaked emails “paint a picture of an industry fighting a coordinated war against public health policy on on many fronts: coordinating messages, influencing reporters, debunking science, stalking social media influencers, building astro-turf coalitions, and lobbying heavily at every level of government”.

It is structured around the axes of “business impact” and “likelihood to materialise” with the small red dots indicating health and consumer policies, the green ones being environmental, the yellow ones being taxation, the blue ones being trade and consumption, and an orange circle indicating CSR (presumably, corporate social responsibility?).

The matrix is also grouped according to “prepare”, “monitor”, and “fight back”. 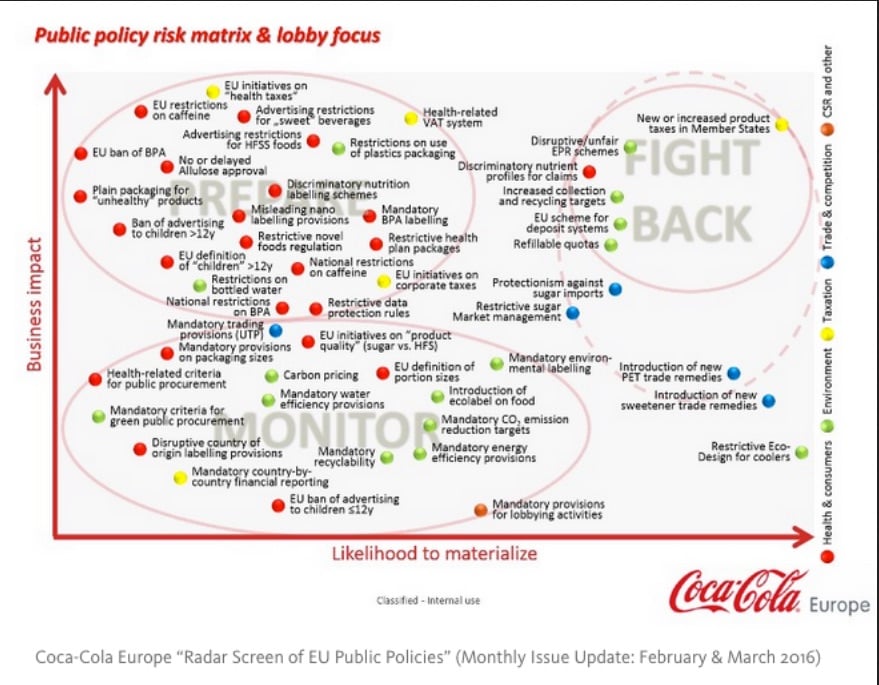 Writing about the matrix at her blog, the prominent US nutritionist Professor Marion Nestle says:

It’s interesting to see what Coca-Cola thinks has a high likelihood of happening: Protectionism against sugar imports, mandatory environmental labels, emission reduction targets, and the mysterious “provisions for lobbying.”

The company has a lot to worry about, apparently.”

At this stage, though, it’s looking like the industry is winning on most fronts. Especially in Australia, where governments have little appetite for picking a fight for the sake of public health.

PrevPreviousDying to be free: Where is the JustJustice focus on the post-prison Indigenous deaths?
NextCripCroakey NDIS Part 1: Scandals, blunders & how change will only come when disability rights are front & centreNext