What it takes to improve the lives of disabled people in remote communities: a case study from Warburton

A program to bring families and health professionals together on Country has been helping disabled people in a remote community, according to a presentation at the NACCHO Summit in Adelaide yesterday.

The program helps to build trust, relationships and respect, and supports participants to identify the solutions that will best help them as “the experts of their own situation”.

Six hundreds kilometres west of Uluru just inside the WA border, Warburton is one of the most remote Aboriginal communities in Australia.

It is home to about 700 Ngaanyatjarra people, a staggering 50 per cent of whom suffer from a long-term health concern or disability.

In a place like Warburton, these difficulties can’t be under-estimated. For some, the remoteness magnifies the difficulties, but over the past 12 months, that remoteness has helped to change perceptions and perhaps lives too.

Bethia Sullivan is an occupational therapist, and she and other health professionals have been taking families out on day trips into the bush to help everyone try and understand disability and put it into a Warburton context.

And that context is pretty grim. Some of the disabled people in Warburton feel so “shamed” about their situation they’ll send someone else to the shop so that people don’t have to look at them.  The lack of wheelchair access to a number of community spaces helps doesn’t help though.

In some cases, it may be only a 10-minute drive, or it may be an hour or more, but the opportunity for families to spend time on their land hunting, making bush medicine, gathering berries and cooking is all that’s been needed.

As dusk falls, they gather around a campfire and talk, with each other and the health professionals, and build relationships, trust and respect.

“Everyone is really happy to talk about their concerns, what’s working well, what isn’t, and start to set about understanding what disability means within that context.”

All the time the participants are told that they are the experts of their own situation and therefore the best one to identify the solutions.

And it seems being away from Warburton is the perfect tonic.

“I think if you just walk in and talk to somebody, you don’t collect enough information,” Sullivan says.

“It’s around building that trust where people over time open up and want to share and you start to see changes. People will say, I really want to work, so I say ok, what can we do to get you a job?”

Well, whatever they’ve done has worked because two women have now got paid employment while five others received mobility care aids and some technical support.

Family members have also been better able to cope with disabled people in their home, while the community has also seen changes.

A wheelchair ramp has been installed and handrails and shower benches are now part of improved facilities for renovated and newly built homes.

Two women even went to Canberra where they visited Parliament House to discuss how the NDIS would be rolled out in remote Aboriginal communities.

One of those women is Priscilla, who became deaf after a childhood illness.

She’s been on the bush camps and says they taught her to “speak up for disability issues”, like she did in Canberra.

The camps also helped her get work with the Home and Community Care program, where she helps the elderly and other people with disabilities.

Bethia Sullivan now wants to work with school kids so that they might understand what it’s like to be someone with a disability.

Teasing is an issue, she says is an “attitudinal barrier” that can be broken down and “understood from an earlier age.”

As Sullivan says, it’s a goal worth pursuing.

“I think in a place where there’s such a high level of unemployment, being able to work with some of the most disadvantaged people, to actually see that some of those people are working, being included in their families, being more respected because they are able to contribute financially is a pretty amazing outcome.”

All that’s needed now is a way to continue the program. A change in the funding model means the bush camps aren’t possible at the moment, as health workers are only able to focus on one-to-one outcomes.

(Update). Bethia Sullivan says: “A lot more education needs to be done with funders to ensure community approaches, rather than just individual clinical consults, if we are to ensure long-term sustainable changes.” 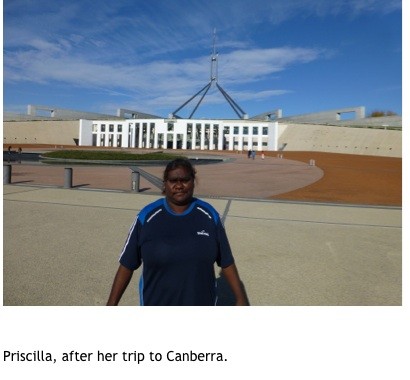 For previous Croakey reports from the Summit

PrevPreviousThe road to Closing the Gap may be turning a corner
NextState of Australian cities 2013: postcodes do matterNext