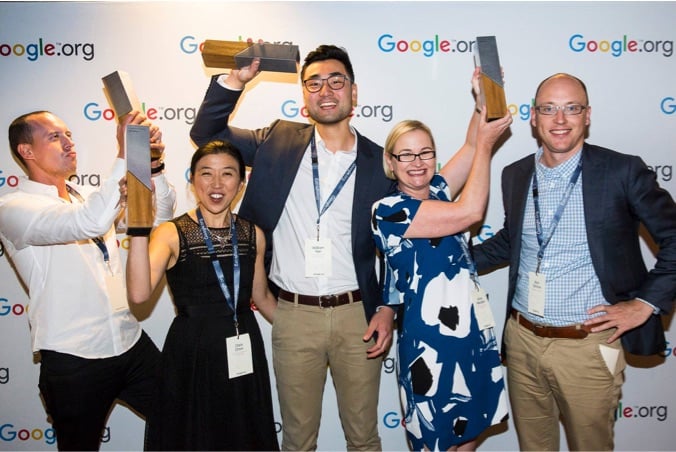 How does a team of public health researchers persuade a multinational corporate like Google to part with many of hundreds of thousands of dollars?

Read on, to discover how Professor Clara Chow, Associate Professor Julie Redfern and their colleagues at The George Institute won the 2016 Google Impact Challenge.

(At Croakey, we are taking careful note…)

As researchers we apply for and receive funding from the likes of the National Health and Medical Research Council every year to fund our trials and studies.

But last week the cardiovascular team at The George Institute for Global Health got an award from a very different source: the 2016 Google Impact Challenge.

It was a win we had worked for, we believe we fully deserved, but until they announced our name we thought we only had a 50/50 chance.

For this was a competition, something different but very exciting for all of us here at The George Institute, and one that required an entirely new approach.

Our focus at The George Institute is to prevent and treat chronic disease on a global scale and we had a project that seemed a perfect fit.

Our studies over the last five years have proved our program improves blood pressure with an effect similar to medications; helps people lose weight, be more active and stop smoking. All of this means they dramatically reduce their risk of a heart attack and death.

The first step in the Google Impact Challenge was to send off a detailed application written in conjunction with our head of development, outlining how we would utilise the funds if we won, our core project team and key partners.

The next stage was an interview, which took place in mid-August. We weren’t sure what to expect. Google didn’t tell us what questions would be asked, or even who would be asking them. All we knew was it was a Skype call and would last for at least 30 minutes.

In the end it was one person from Google Australia who posed a series of questions about scalability, our partners, costs, who would fund the project and how it differentiated from existing SMS health programs.

A couple of weeks later we were told to prepare for even more questions at Google’s HQ in Sydney. But once face-to-face, we were given a fantastic surprise, and told we had made the final 10 and, like all the other entrants, were being awarded $250,000. In a way we had already won but there was much more money in the offing.

Then in mid-September we met our competitors and were given a rundown on how the next month would pan out. We were informed that a further $500,000 would each be awarded to four organisations: one that won a public vote which would play out over three weeks, and a further three via a pitch process in front of a panel of judges on October 26.

The odds were good, even despite the tough competition. World Vision had submitted an incredible project tackling fires in slums in India and, with their worldwide membership, we were convinced they would win the public vote.

There was also a robot claiming it could save the Barrier Reef. How could we compete with that?

But we weren’t deterred, and decided to go full throttle at winning both the public vote and the pitch.

Within a couple of days, we had built up a list of partner organisations to work with, had an array of social media messaging prepared for Facebook and Twitter, internal communications drafted for staff to share, as well as press releases, blogs and a video (see the clip beneath this post). 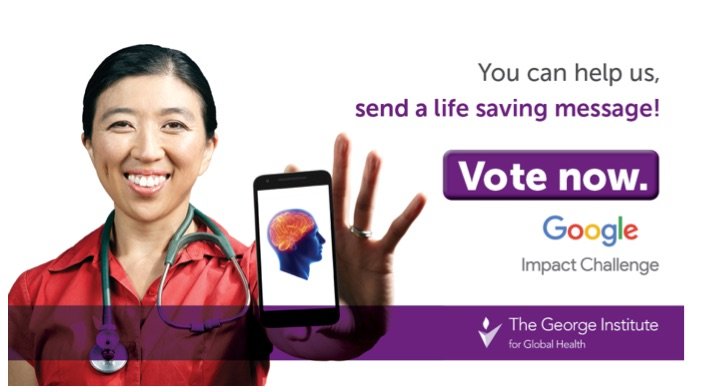 There was no feedback at all from Google on how the public vote was tracking over the following 21 days. All we could see was activity on social media.

When World Vision employed Hugh Jackman to tweet his support for their campaign, our hearts sank a little.

Now was the time to concentrate on the pitch, which we were told could be no longer than 90 seconds. Given an average person utters about three words a second, that’s just 270 words to outline the scale of the problem, our solution and its impact. Not easy, and a world away from lecturing or presenting at conferences for an hour or two.

The panel of seven judges was also very different to our normal, very health focused audience. As researchers we have to be incredibly cautious about how we present our results. Our pitch needed to be honest but it also needed to be emotive.

To say we were nervous was an understatement when the final 10 were brought back to Google HQ last week.

The tension in the room was palpable as we listened to pitch after pitch followed by a five minutes Q & A session.

What we were hearing made us increasingly nervous. Had we underplayed TEXTCARE? Should we have projected the impact on a much bigger scale like other organisations were clearly doing?

In the end we were announced as one of the three pitch winners, which was a fantastic moment.

Looking back, we think we got the balance right. Our pitch was credible and our project proven and scalable.

These funds mean we can now employ project staff and invest in software and get TEXTCARE to 100,000 Australians over the next 18 months. We will start with local health districts in Australia and private health insurers.

Together with our team we will explore opportunities for start-up in other countries across Asia. We also receive support from a “Googler” for 12 months to help us progress IT and software capability, which will be hugely helpful.

But one of the biggest benefits is the stamp of approval from Google. To be associated with such an innovative and top performing tech company will definitely broaden our horizons.

So, would we do it again?

Absolutely, and we would encourage any not-for-profit to apply for the next challenge.

• Professor Clara Chow, is Director of the Cardiovascular Division at The George Institute and Associate Professor Julie Redfern is its Deputy Director.

PrevPreviousFive lessons from a successful public health campaign, tackling the promotion of unproven cancer scans
NextDying to be free: Where is the JustJustice focus on the post-prison Indigenous deaths?Next