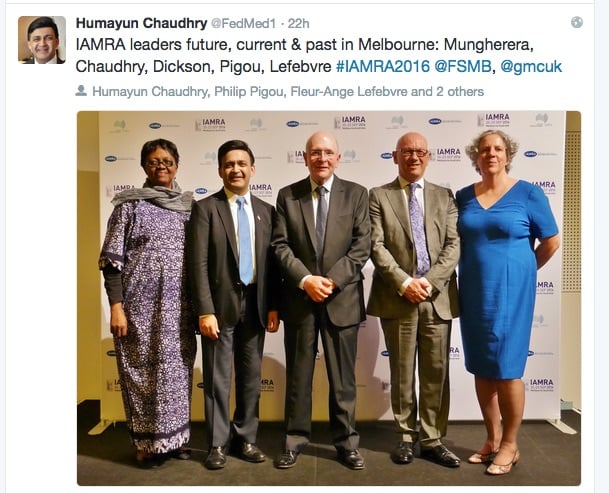 What keeps you awake at night? And other burning questions for medical regulators

On the first day of the 12th International Medical Regulation Conference in Melbourne yesterday, delegates were urged to work “upstream” so they can prevent harm from occurring to patients and the health system, not just manage it when harm is caused.

Welcoming 450 participants – a record number – from more than 42 countries, International Association of Medical Regulatory Authorities (IAMRA) chair Niall Dickson told the opening session that regulators were finding themselves under pressure in a “turbulent world”. 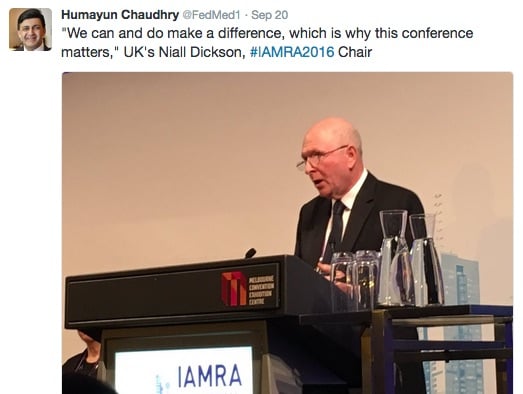 Healthcare had “belatedly woken up” to the challenge of safety, and was attempting to adapt to a more demanding and transparent world, he said.

Health professions were also changing and were more than ever on the move, working across jurisdictions and other boundaries.

“Like the profession we regulate, more is expected from us,” Dickson told the biennial conference.

As Croakey’s conference preview outlined, the conference is being held amid investigations into a number of tragic and distressing failures in care across Australia. Other countries have similar experiences, not least the United Kingdom’s Mid Staffs scandal.

Dickson quoted Medical Board of Australia chair Dr Joanna Flynn as saying the sector needs to move from being “philosopher regulators” – considering ethics and values – to also becoming “scientific regulators, where data, once the detritus of our operations, can help us develop a more risk based approach to regulation that seeks to prevent harm”.

“We all know the regulators’ challenge is to make sure patients are safe and to maintain the trust of the public while forging positive and ongoing relationships with the profession,” he said.

“This isn’t easy and is becoming more complex as expectations rise and regulators find themselves in firing line when services are seen to fail or are unsafe.”

It was a continuing theme through presentations and discussions yesterday, following a brief official opening from Health Minister Sussan Ley. 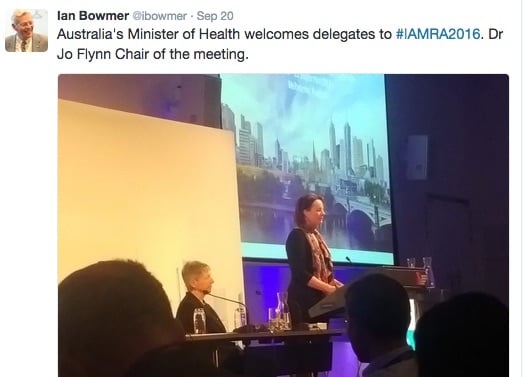 Ley hailed Australia’s national and multi-professional registration and accreditation scheme, but said it was an ongoing project that requires “ongoing vigilance” across jurisdictions and professions.

She particularly welcomed delegates from Pacific nations, saying the region needs to enhance its ties “to increase mobility and portability” of health qualifications and to share education and health services.

Instead of keynotes, the concurrent sessions were topped and tailed by interactive panel plenary sessions, with delegates asked on arrival to fill in a postcard – in five words or less – “what keeps you awake at night?” 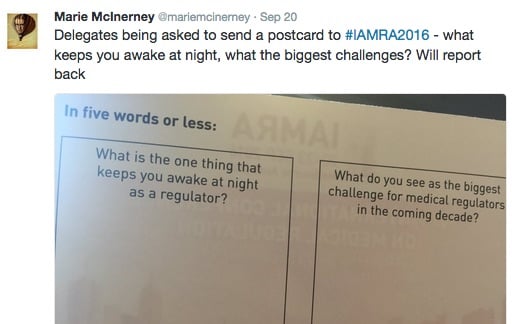 The opening session provided a smorgasbord for conference participants to choose from, presenting three real-life case studies from Australia, Canada, and Kenya that outlined tragic abuses and regulatory nightmares.

They included a shocking case of a woman who died in childbirth due to a doctor being under the influence of alcohol, and a complex and long-running case of a psychiatrist who was ultimately jailed for sexual abuse and suspended, after a decade of varying alerts and complaints that authorities determined could not be substantiated.

It was an interactive session, with delegates asked to vote via a conference app on how high they judged the risks to patient and public safety in each case, and what action should come next. 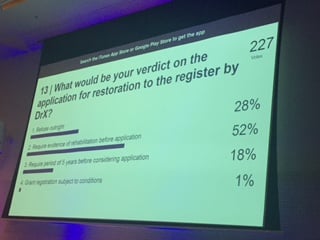 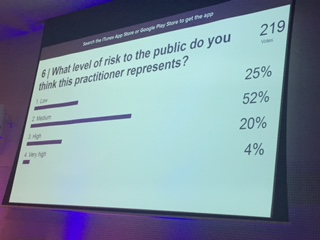 There was much agreement, but also significant variation on a number of key matters, like when and whether to alert police, and whether investigations should or could go into another country.

For some, talking afterwards, the session highlighted how easy it is to know what to do after an event – to use the “retrospectoscope” as one put it, and that “nothing is black or white”.

For others, it revealed continuing gaps and failures, and alarming signs the system was still more rooted in protecting practitioners than patients and the public good.

Conflicting views also were aired in the following panel discussion, particularly around whether some offences are “so heinous” that a medical practitioner should never be given permission to practise again.

Dr Kgosi Letlape of the Health Professions Council of South Africa argued passionately that regulators had to accept, as the wider society does when someone is released from jail, that those who have been punished have “done their time”.

However, Susan Hughes, Member of the Medical Council of New Zealand, said she believed there were some offences that made medical practitioners not fit to practise again.

She was particularly concerned about practitioners who use their office as an opportunity to indecently assault their patients.

“The first thing we teach children is that actions have consequences,” she said. “There’s an enormous distinction to be made between doctors who offend outside and within the profession.”

Hughes also saw an important gap in a Canadian case, where an investigation was closed when a complainant “failed to attend” an appointment to discuss a complaint about “fondling”.

“You’ve got to be focused on where power sits in this,” she said. “The doctor is all powerful.”

Regulators needed to have a more complainant-centred mechanism, “where you go to them, allow them to tell their story, because it’s so challenging for them to be confronted by suits.”

She said: “Never lose sight of the power differential between patient and doctor. If they’ve done it once and denied it, how would you have the confidence they won’t do it again?”

Issues of honesty and insight into wrongdoing were also themes, with one delegate pointing to the prevalence of lies in the case studies, and proposing that “dishonesty might not just be treated as an act but as a state of mind”.

The room also discussed the power differential within health groups, sparked when delegates considered whether or not a nurse should have intervened with the drunken doctor to avert the mother’s death.

“If the system does not allow your nurse to stop the doctor working, then you must fix your system,” said Dr Daniel Yumbya, CEO of Kenya’s Medical Practitioners and Dentists Board.

However, how to determine responsibility in more “equal” team-based care was also raised as an emerging issue for countries, like the United States, that don’t currently have multi-professional regulatory bodies.

Another delegate raised concerns about the reliance on certification from hospitals and medical practices for medical practitioners in “areas of need”, such as rural and remote regions, where it is very difficult to recruit and retain doctors. “So practitioners, owners may want to be more supportive of a doctor because it’s so hard to get another one there,” was one comment.

“Do we think chaperones are appropriate in this day and age?”

New Zealand Law Professor Ron Patterson said that’s the first question underlying a review into chaperoning that he is leading for AHPRA, in the wake of a case where a Melbourne neurologist is alleged to have continued to sexually assault patients even with a chaperone in the room.

Urging health and regulatory groups to make submissions to the inquiry, Patterson said he was hearing two responses to the question: some who felt it was an antiquated concept from a bygone era; and others who said it was a critical tool to be able to use between taking no action and suspending a practitioner.

There was similar division in the room. Some questioned whether chaperoning was at all appropriate ethically, given the need for trust and informed consent for patients (who often don’t know the chaperone’s role and rarely the reasons for their presence).

For others, the question was how to make sure the chaperoning process protects patients while managing procedural fairness for practitioners.

** Please note, this post has been corrected to attribute a quote to Dr Kgosi Letlape.

More conference news and views, from the Twittersphere 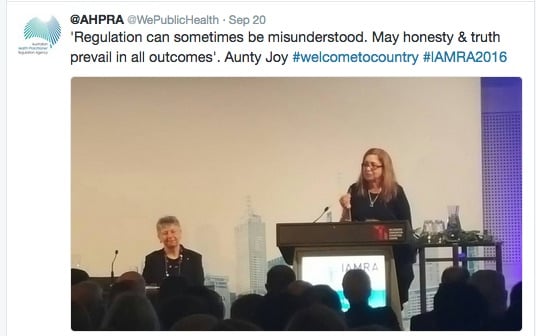 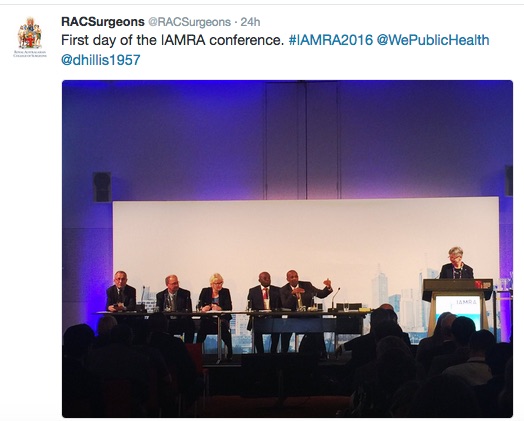 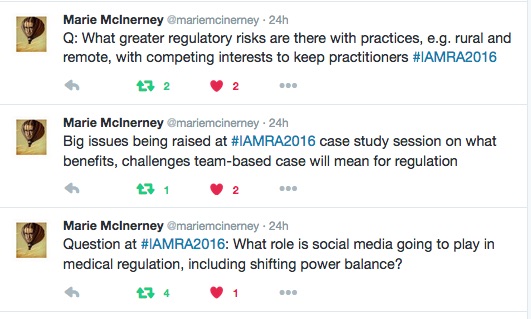 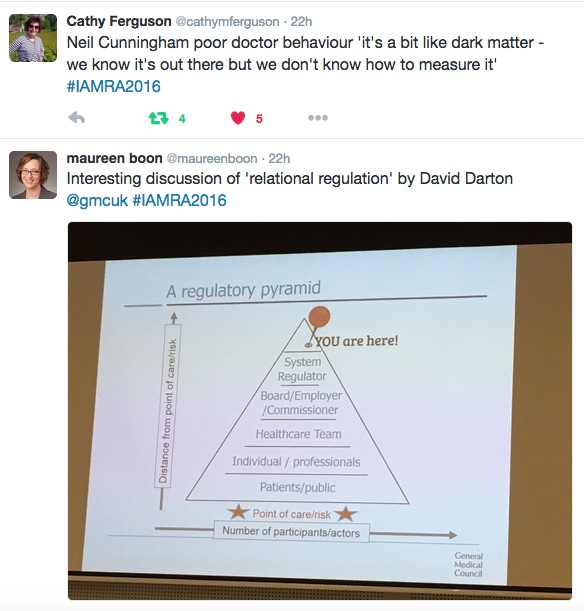 From a workshop on “mastering the media” 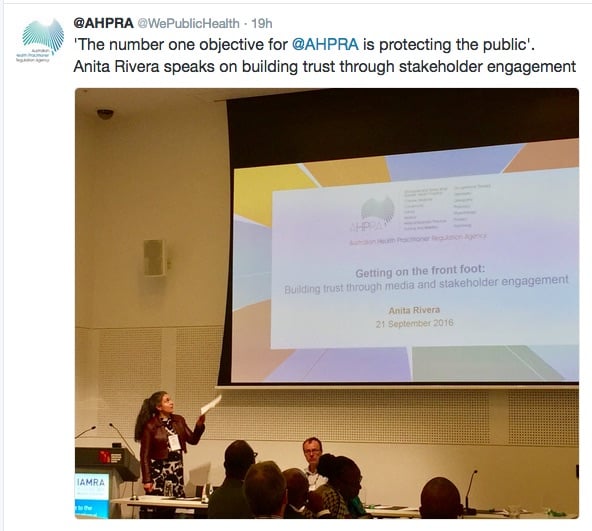 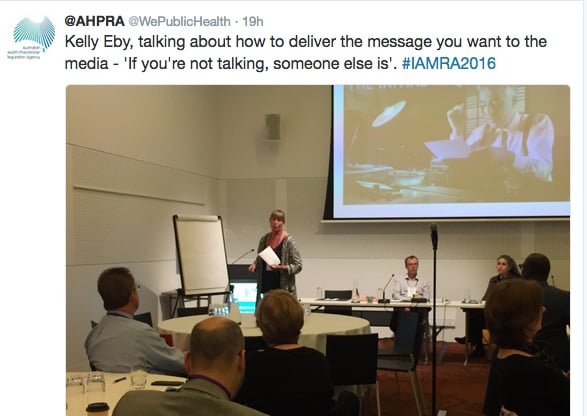 ABC presenter Geraldine Doogue presented a session: Shaping an old profession for a new society – What does the community need/want/expect? 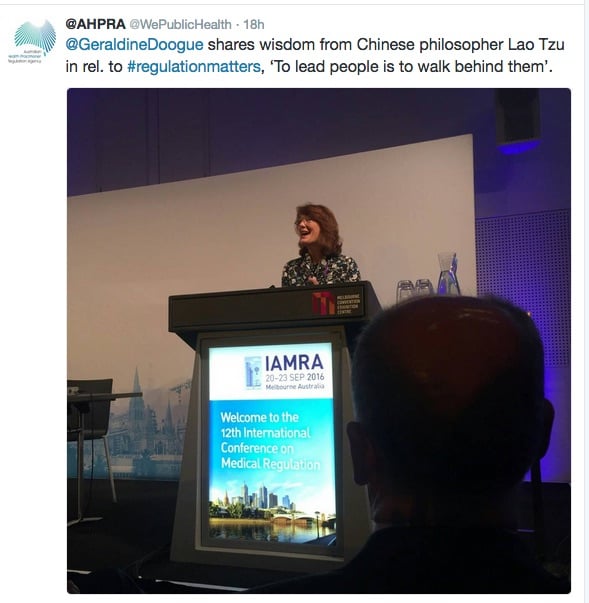 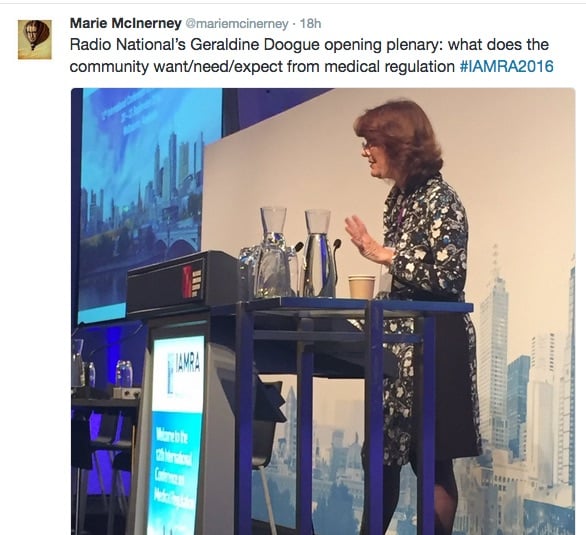 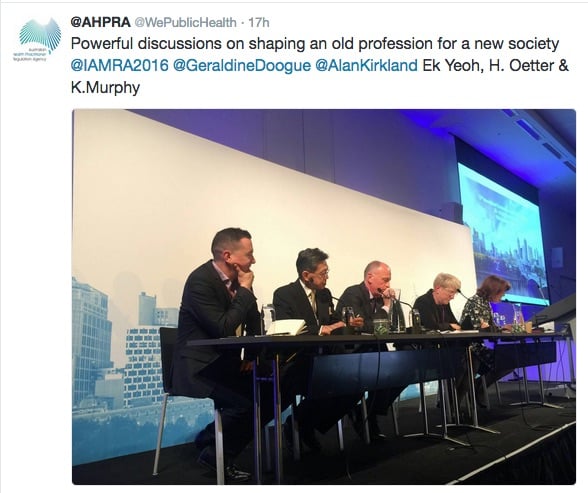 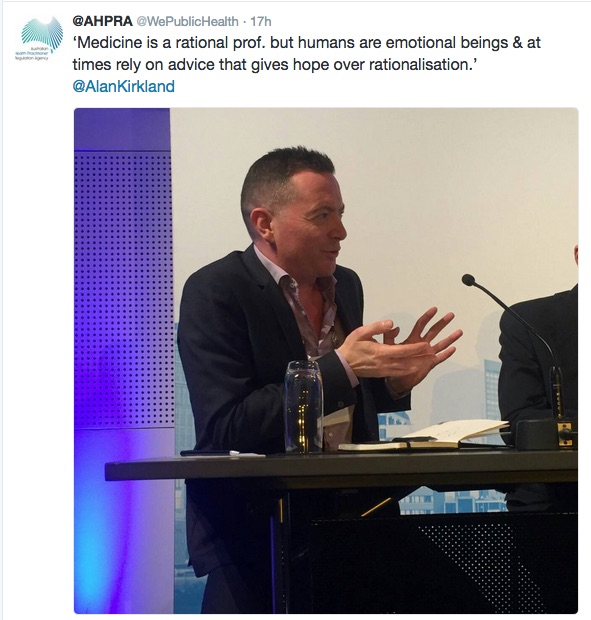 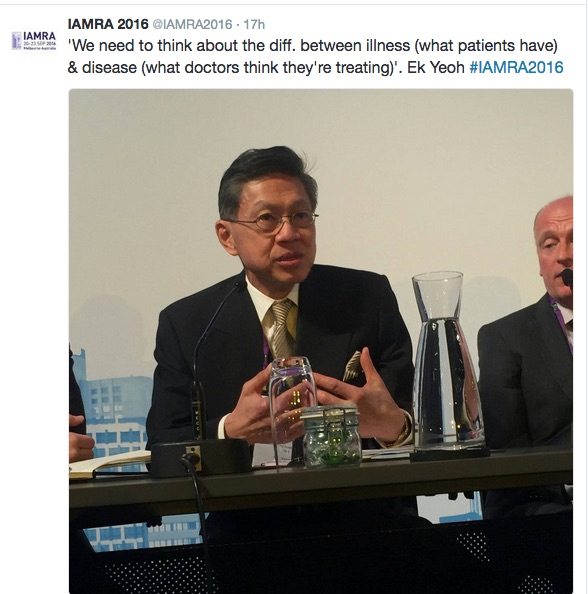 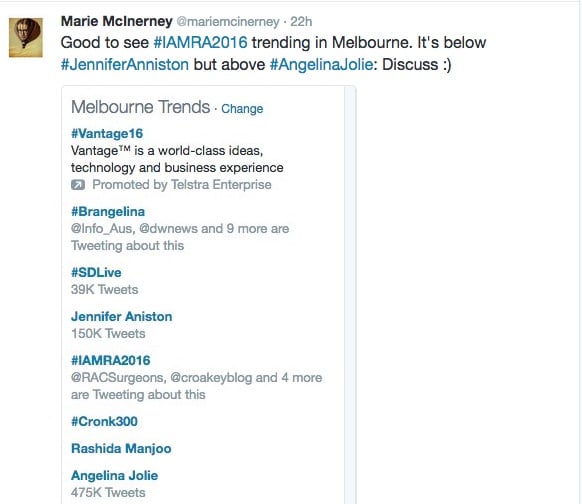 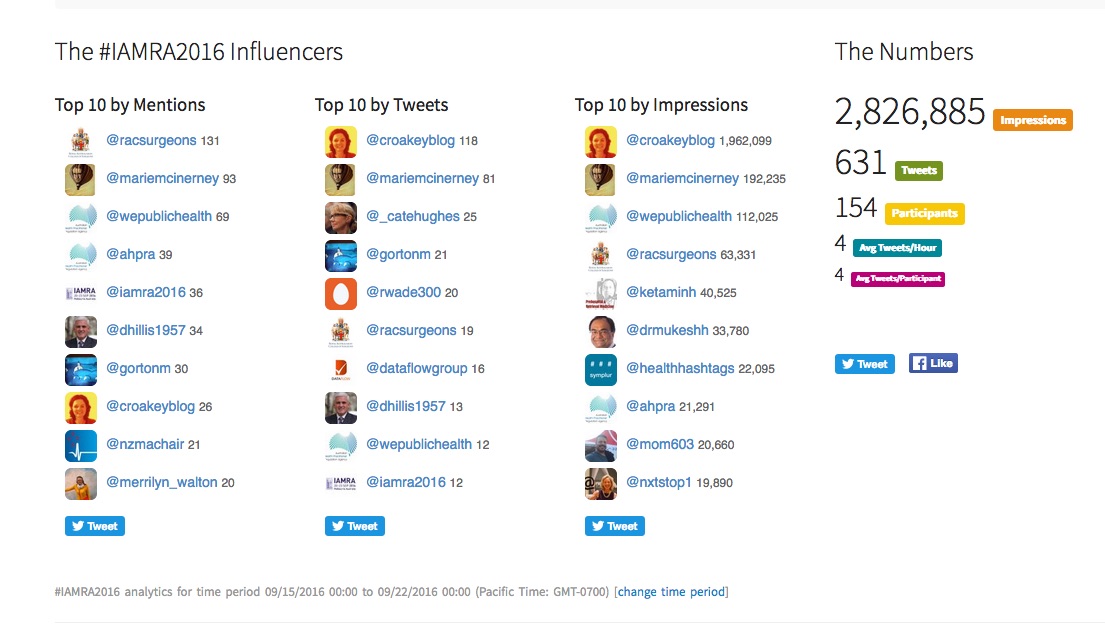 PrevPreviousWhy evidence is not enough
NextPutting Art Before the Cart: JournalWatchNext