What makes a city liveable? Some answers from a new public health journal

A new online, open access journal, Public Health Research and Practice, has been launched by the Sax Institute.

You can find out more about it below from editor Anne Messenger, who is also tweeting this week for @WePublicHealth.

What does it mean to reside in a liveable city? Organisations globally consider it differently. The OECD for example, considers Canberra the world’s most liveable city, while according to the Economist Intelligence Unit, Melbourne has taken the top spot four years running.

Until now though, no-one has measured liveability using a health lens. A national research collaboration led by Professor Billie Giles-Corti from the University of Melbourne has embarked on a major new project called the National Liveability Study that will develop Australia’s first set of national “health liveability indicators”.

The indicators will be a standard we can use nationally to measure which environments work best for health and which don’t. They can also be used to measure differences within and between cities, where progress is being made and where there’s room for improvement. The hope is they’ll be a tool for anyone involved in creating healthy neighbourhoods, such as governments, developers and public health planners.

Evidence already supports the notion that if we make our neighbourhoods more liveable, then our health will benefit. An interesting thing about this project is the way it will add to the knowledge base − it will use a Geographic Information System (GIS) to examine five domains of liveability: access to alcohol outlets, food outlets, public open space, transport, and “walkability” i.e. street connectivity, land-use mix and residential density.

The research team will then review government urban planning policies for each of the domains, map this against health information, and create and compare a set of indicators based on the policies.

There is interest and involvement in this nationally. A national advisory group for example, has representation from federal and state governments and state-based technical working groups in the ACT, Victoria, NSW, Queensland and WA, and will provide advice over the project’s two-year life span.

The researchers themselves come from institutions across the same five states. And the project is part of the work of The Australian Prevention Partnership Centre, a national collaboration of more than 20 organisations that is investigating how to build a national system to prevent chronic disease.

Professor Giles-Corti hopes the project will leave a national legacy. Certainly it’s an example of how we might begin to build the infrastructure for a prevention system to address the huge challenges that chronic disease will pose for us as a nation.

Systems approaches
The idea that we need to look at how our systems work – or don’t work − together to tackle the burden of chronic disease is the central theme in the first issue of Public Health Research & Practice, a new online only, peer reviewed public health journal that has been launched by the Sax Institute.

The journal represents a new direction for the NSW Public Health Bulletin, which the NSW Ministry of Health published for nearly a quarter of a century. The Ministry continues to support Public Health Research & Practice and a full archive of Public Health Bulletin articles is available on the journal’s new website. The publication is guided by an editorial board made up of some of Australia’s leading public health experts.

The systems thinking theme of the first issue is addressed in other papers, such as one by Professors Adrian Bauman and Don Nutbeam, who look at the difficulties in evaluating efforts to prevent chronic disease.

In our ‘In Practice’ section, Louise Farrell and colleagues write about a scaled-up capacity-building model designed to increase healthy eating and physical activity among NSW children. The model may have the potential for application to other policy areas.

The point of difference for Public Health Research & Practice will be its strong focus on connecting public health decision makers and practitioners with research that is meaningful to their work.

It will also support innovation; we want to highlight high-quality work happening on the ground that others in the field can learn from. And in the spirit of open access publishing, we want people to share and distribute what they find in the journal.

We hope the journal will be of interest to Croakey readers.

You can browse the first issue here, subscribe to receive quarterly e-alerts when the journal is published, make suggestions about themes or topics for future issues, submit manuscripts and follow us on Twitter @phrpjournal. 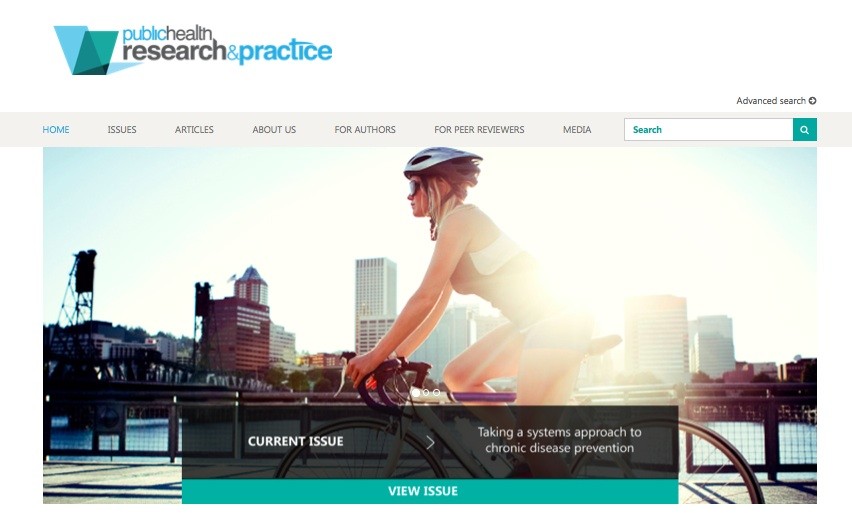