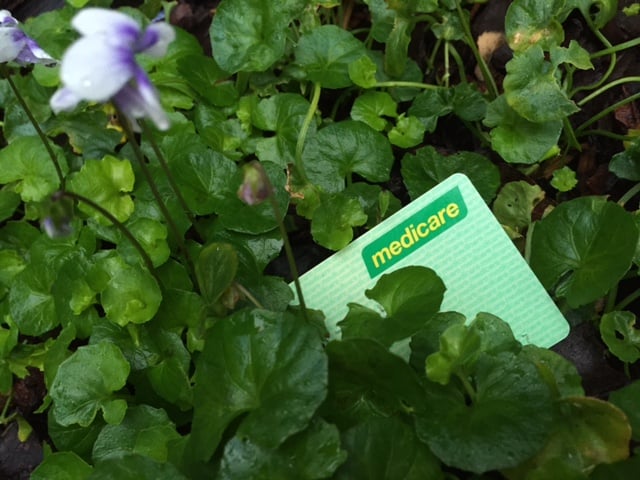 So is Medicare saved?

Prime Minister Malcolm Turnbull – still unsure if he will go on to govern once the 2 July votes are all counted – on Tuesday admitted the Coalition must rebuild public trust on the issue of Medicare.

He continued to insist the Labor’s “Medicare privatisation” campaign was a “grotesque lie” but, at a news conference with his Deputy Barnaby Joyce, conceded there had been “some fertile ground” in which it could be sown.

“[We] have to work harder to rebuild or strengthen the trust of the Australian people in our side of politics when it comes to health. There is no question about that,” he said.

Here’s the relevant transcript of his comments below. 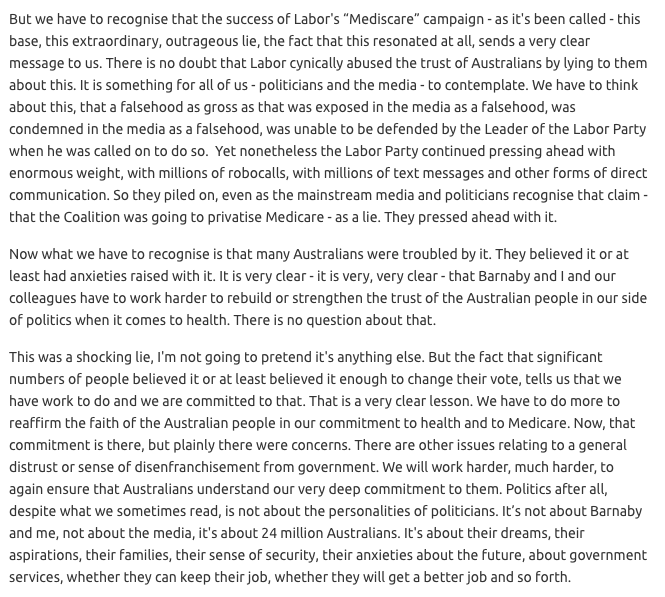 He was then asked by a journalist how much of the blame for electoral distrust over the Coalition’s intentions for Medicare fell at the feet of former Treasurer Joe Hockey and Prime Minister Tony Abbott for the 2014 budget (in which, among many other terrible decisions on health, the government sought to introduce the ill-conceived and ill-fated $7 co-payment). He responded that he didn’t want to get into “the political archaeology” of the issue….: 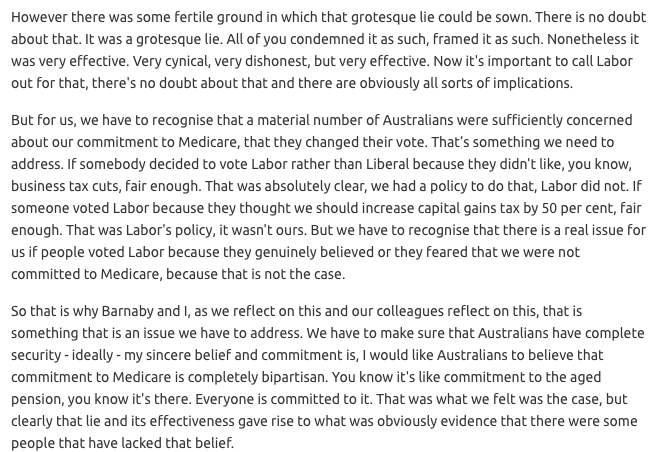 Here the full transcript of his media conference.

Interestingly, the new AMA President Dr Michael Gannon, who has taken a much more conciliatory approach to the Coalition than his predecessor, had a similar ‘take’, tweeting on Sunday:

What this election has shown to us is that health is at the centre of everyone’s thinking when they cast their vote. It is a moral imperative of government to prioritise the health of its citizens. I think what we’ve seen in the last few days is that it’s a political imperative as well.

Croakey has run a series of articles in the leadup to the election, discussing the erosion of Medicare by the Coalition under the Abbott/Turnbull government and earlier. See below too for this article, republished from The Conversation, by Associate Professor Jim Gillespie, from the Menzies Centre for Health Policy, on how ‘Labor’s ‘Mediscare’ campaign capitalised on Coalition history of hostility towards Medicare.’

Later on Tuesday afternoon, Guardian Australia reported former Abbott Health Minister Peter Dutton as dodging questions about the implications of the Prime Minister’s comments, saying the Coalition had run an “honest” campaign during the election on health, had a “very good message to tell”, and any changes to the current policy would be “dealt with over the course of any government”.

Treasurer Scott Morrison was also holding firm on Wednesday, warning that Medicare has to be sustainable over the long term and we can’t have the health system being a “moneypit”.

But the election and Turnbull’s admission will put a new level of scrutiny on Coalition health policies to come, whether or not they win government this time around. If they do, the early money (and biggest pressure from the AMA) is on unfreezing the Medicare rebate, but this “health history” of the Coalition’s policies ahead of the election shows how much more should be on the table and is at stake.

There’s also conjecture about the future of Health Minister Sussan Ley, who has been very quiet through and since the election. The Conversation’s political analyst Michelle Grattan said:

One thing Turnbull should do in the short term if he’s forming a new ministry is find a first-rate minister to put into the health portfolio. The present incumbent, Sussan Ley, was kept away from the front line for most of the campaign. When John Howard had a political problem with Medicare he appointed Tony Abbott to the health portfolio; Abbott sorted the issues, though he spent a lot of money in the process.

See also this post – We told you so: Ignoring primary care is never a good idea – from GP Edwin Kruys at his Doctor’s Bag blog, and this article at The Drum by the Grattan Institute’s Stephen Duckett dismissing as “both naive and premature” concerns that all prospects for health reform are now dead, saying:

First, “reform” is not a neutral word – my “reform” is your destruction of Medicare. There are many potential health care reforms that should be able to attract bipartisan support. For example, both parties had reforms to primary care through introduction of health care homes in their election platforms, and both would presumably support modernising the fee schedule to remove outdated and inappropriate items. What are off the table are partisan reforms, inconsistent with the public’s understanding of what Medicare is.

(As a side note, Croakey was dismayed to hear The Drum has been axed this week as one of the first decisions of new ABC managing director Michelle Guthrie – another blow to a diversity and specialist opinion in Australia’s media).

And see below for Twitter reactions to the Prime Minister’s comments.

In this statement, the Australian Healthcare and Hospitals Association (AHHA) says the Prime Minister’s pledge to regain the voters’ trust on public healthcare is welcome, but the Coalition must acknowledge that voter concerns are “legitimate and long-standing, not a response simply to election campaigning”. AHHA Chief Executive Alison Verhoeven said:

“The 2014-15 Budget and subsequent health policy decisions have caused significant damage to the Commonwealth’s relationships with the states and territories, the public hospital sector and with the voting public, who have made clear that they regard public healthcare as a national priority.

“Australians want well-resourced public hospitals and they are very concerned about rising out-of-pocket costs for healthcare. It’s time for the Coalition to acknowledge that their health policy and budget measures have negatively impacted on voters over the past three years. Despite their rhetoric about unsustainable health costs, the real pain is being felt by the public, not by governments.

“Regaining trust will require meaningful action, strategic policy effort, and engagement with all parts of the health sector.  The Coalition has initiated some welcome innovations, particularly in regard to the forthcoming trials of health care homes, tasking Primary Health Networks with commissioning place-based services focused on health outcomes, and re-energising the My Health Record. It has the opportunity to capitalise on this by ensuring these programs are appropriately resourced, and complement the cornerstones of our public health system – affordable primary and acute care for all Australians.

“The Coalition will need to work in genuine partnership with all stakeholders including Opposition and cross-bench members, listening and responding to diverse views and not just those of a favoured few.

“Reversing the Medicare rebates freeze, re-establishing a multi-lateral agreement with the states and territories on public hospital funding beyond 2020 and coordinating reforms across the sector to deliver sustainable, equitable and accessible healthcare will allow the Commonwealth to start taking forward steps on health.”

The Australian Labor Party’s Medicare campaign has been dubbed an election changer.

While outsourcing data management and billing systems raises issues of confidentiality and access, the possible changes would not affect access to Medicare. To this extent, criticisms that Labor ran a misleading campaign have some basis.

But scare campaigns only work if there is some anxiety to build on. Labor’s Medicare campaign plugged into a long history of Coalition ambivalence – or open hostility – towards Medicare.

The Coalition’s hostility towards Medicare

The Whitlam government’s Medibank program, the predecessor of Medicare, faced furious opposition from the Liberals and (then) Country Party. Allied with the Australian Medical Association, the conservative opposition fought the introduction of universal health insurance, blocking it in the Senate.

The Medibank legislation was forced through parliament in 1974 after a double dissolution election and the only joint sitting of both houses of Parliament. Even then, a rearguard High Court action invalidated crucial funding legislation. As a result of this resistance, Medibank was introduced in July 1975, only four months before the dismissal of the Whitlam government.

The Fraser Coalition government initially kept its promise to preserve Medibank. But through a series of complicated “reforms”, Fraser kept the name, but gradually turned the remnants into a means tested “welfare” system. In 1981 Medibank was abolished completely and Australia returned to the patchy and chaotic coverage of subsidised private health insurance.

This pattern of hostility was replicated against the Hawke government’s Medicare, which was introduced in 1984. For the next decade, Coalition politicians promised to set Australians free from the shackles of compulsory national health insurance.

The electorate was unimpressed. The low point of these attempts to replace universal coverage came with Peter Shack, the Liberal shadow health minister, admitting he had no workable policy going into the 1990 election:

I want to say with all the frankness I can muster, the Liberal and National Parties do not have a particularly good track record in health, and you don’t need me to remind you of our last period in government.

Coalition hostility to Medicare played a big part in Labor’s very successful scare campaign in the 1993 “GST” election. The John Hewson-led opposition promised to end bulk billing and restore the supremacy of private insurance. Analysts have determined the Medicare issue as more important than the GST in Keating’s triumph.

This sorry tale appeared to end in 1996. John Howard, heading for a Coalition landslide, reassured voters that not only would his government be “relaxed and comfortable”, but he recognised the error of attacking Medicare. He declared Australians “want Medicare kept” and pledged that “Medicare will remain totally in place under a Coalition government”.

Medicare as a ‘safety net’

Howard regarded health as a minefield best avoided for most of his first two terms. He repudiated suggestions that co-payments should be brought in for GP services, threatening bulk billing. At the same time, his language showed a continuing ambivalence towards universal coverage. He referred to Medicare as a “safety net”, with an implication it was more appropriate to those in trouble.

This “residual” approach saw Medicare as a discretionary government handout for those who could not pay their own way in the private system. John Deeble, Medicare’s prime architect, argued this was a fundamental assault on the basic principle of:

an insurance system where everyone contributes according to their income. They then have a universal right to coverage.

Howard froze the level of GP rebates (fees) in the 1996 budget. This slowly squeezed GP incomes, forcing many to abandon bulk billing and charge upfront fees. Whether intentional or not, the decline of bulk billing revived old fears of Coalition intentions towards Medicare.

By 2003 the issue was hurting the government so badly, a new health minister, Tony Abbott, came in with an open cheque book to end the crisis. Even then, new bulk billing incentives were aimed selectively at children and pensioners. Howard argued:

it was never the design [of Medicare] … to guarantee bulk billing for every citizen.

The Abbott government’s Commission of Audit ended this truce. It argued that:

Political commentator Nikki Savva has argued the Commission’s position shocked Abbott and he ignored most of its recommendations. However, it is not surprising that when his government attempted to bring in new GP co-payments (a Commission recommendation), these were read as part of a fundamental assault on Medicare principles of bulk billing and universality.

These threats to Medicare’s survival have had a stifling effect on serious debate over the real problems of the health system. It has focused too much attention on bulk billing, which has become a symbol of universal access.

After the failed co-payment experiment, the Coalition government moved towards some serious reforms to measure the efficiency and value of Medicare services, and improve primary care.

These reforms will be threatened – and oppositions will be tempted by further Mediscare campaigns – if the broader framework of universalism is under siege. 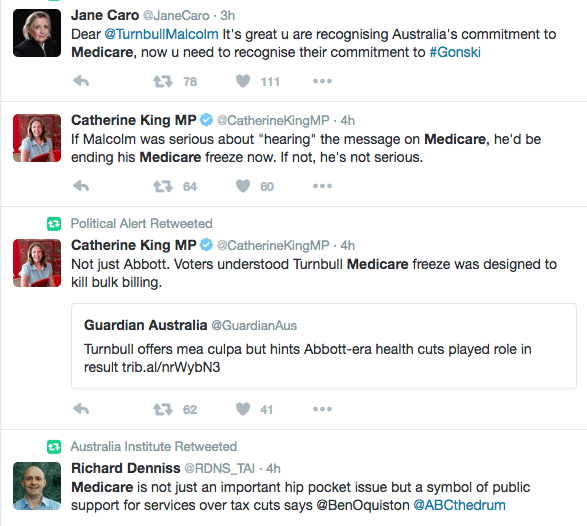 This letter, published this week in The Canberra Times, was shared on Twitter: 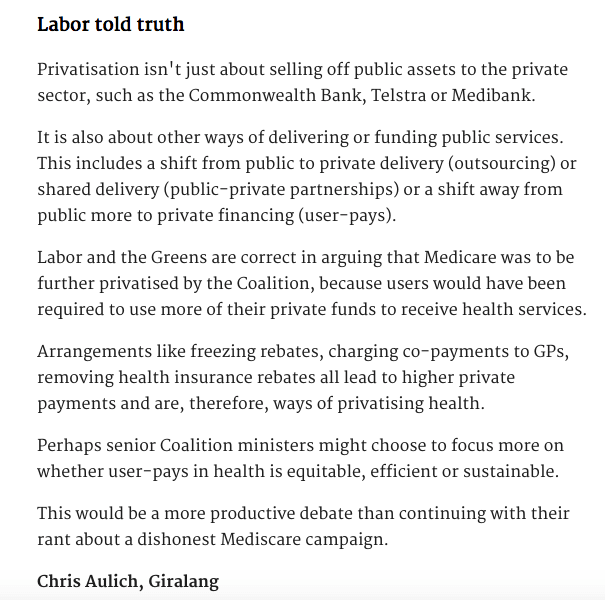 And just including this one because it’s quite a pic! 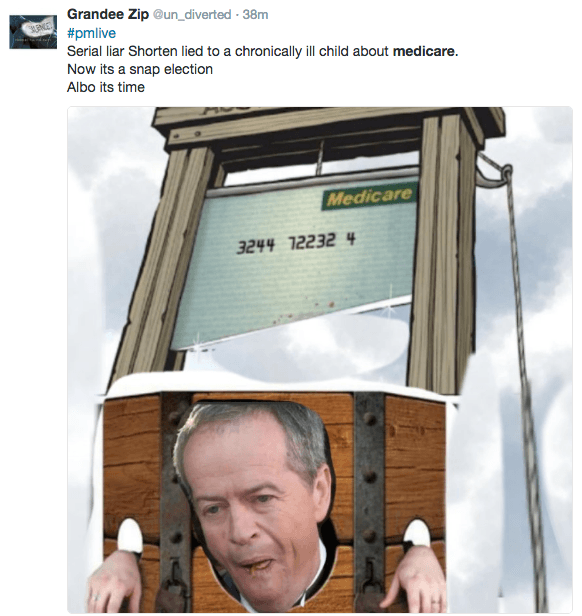 Fatal wound for Medicare? New fees for dressings “herald the end of bulk-billing”

Newstart: “a sick policy in need of healthy rethink”