What Obama’s plan for coal power means for Australia

The health implications of climate change are well documented but despite broad support for actionin this area from health experts and stakeholder groups, public health issues are often ignored in the debate on climate change policy in Australia.  In contrast, in the USA the most recent installment of President Obama’s Climate Action Plan focusses directly on the health impacts of coal power.  Rosemary Lyster, Professor of Climate and Environmental Law at University of Sydney, discusses this Plan and its implications for Australia.  She writes:

The US government has unveiled the latest instalment in President Barack Obama’s “Climate Action Plan”, focusing on reducing carbon emissions from old power stations.  The “Clean Power Plan” will reduce carbon emissions from the power sector by 30% of 2005 levels by 2030. The power sector is responsible for a third of US emissions. Significantly, in publicising the plan Obama has focused on the health impacts of coal power, while also regulating carbon pollution. It exposes the real cost of “cheap” coal-fired electricity; Australia should take note.

On 25 June 2013, President Obama issued a Presidential Directive to the federal Environment Protection Authority (EPA) to issue “Flexible Carbon Pollution Standards for Power Plants” in a staged process. The proposed standard for future power plants was released in September 2013; and the standard for modified, reconstructed and existing power plants was released by the EPA yesterday.

The proposed standard places emissions reduction goals on state governments, rather than individual power plants. State governments must then decide how to implement their own targets. They must submit their implementation strategies to the EPA by June 30 2016.

The EPA will give states an interim goal which must be met from 2020-2029 followed by a final goal that must be met in 2030 and into the future. 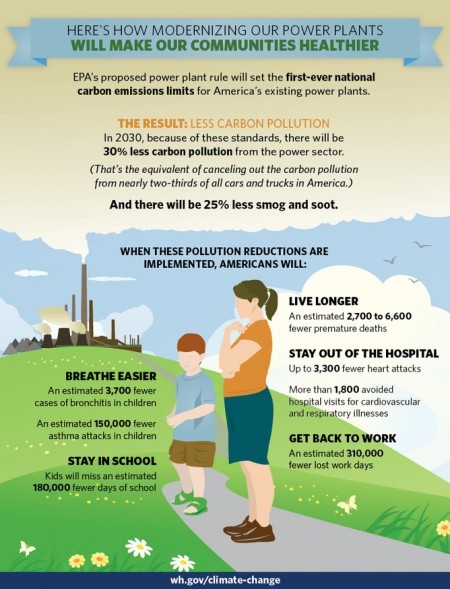 Power to the EPA

The Environment Protection Authority is responsible for enacting the plan thanks to a landmark Supreme Court case in 2007. The case, Massachusetts v. EPA, saw 12 states led by Massachusetts unite to challenge the EPA’s refusal, under the Bush Administration, to regulate greenhouse gas emissions from vehicles.

At that time, the EPA had argued that it was unwise to regulate these emissions because a causal link between greenhouse gases and the increase in global surface air temperatures had not been established unequivocally, and because President Bush had a comprehensive program on climate change.

The US Supreme Court found that the harms associated with climate change are serious and well recognised. The court also found that greenhouse gases fit well within the definition of “air pollutants” and that the EPA has statutory authority to regulate such emissions from motor-vehicles under the Clean Air Act.

Consequently, since 2009, the EPA has been responding to Presidential Directives from Obama to regulate greenhouse gas emissions first from vehicles and now from power plants. This means that the President and the EPA can take action on climate change, in spite of the US Congress failing to pass emissions reduction legislation in 2010.

What’s critically important to note about these rules is that they aren’t just about cutting carbon pollution. They are also a very significant public health intervention by the Obama administration and have been a long time coming. They take the true environmental and public health costs of generating electricity from polluting power plants into account, instead of pretending that coal-fired electricity is “cheap”.

The Obama administration’s public health action on power plants has a clear scientific and public health basis. In 2009, the US National Research Council responded to a request by Congress to examine the externalities of energy production in the US. Its report, “The Hidden Costs of Energy”, found that in 2005 non-climate change damages from coal burning were greater than any other form of energy production. The report considered impacts on health, crop yields, building materials and other areas.

In 2005, these damages amounted to US$62billion, or US$156 million on average per coal power plant. More than 90% of the damages are associated with premature human mortality; and 85% were damages emanating from sulfur dioxide emissions rather than carbon emissions.

It’s not surprising then that the EPA states that its Clean Power Plan will deliver climate and health benefits worth an estimated US$55 billion to US$93 billion per year in 2030.

As well as cutting carbon pollution, it will cut particulate emissions, nitrogen oxides, and sulfur dioxide by more than 25%. By 2030 this is expected to avoid “up to 6,600 premature deaths, up to 150,000 asthma attacks in children, and up to 490,000 missed work or school days.”

This will provide up to US$93 billion in climate and public health benefits. Electricity bills are expected to reduce by up to 8% by increasing energy efficiency and reducing electricity demand.

What does it mean for Australia?

What the Obama administration action shows is that there have been some serious gaps in the public debate in Australia about the true cost of our “cheap” coal-fired electricity. For a very long time, communities have raised concerns about the impacts of coal-fired electricity, coal mining and the transportation of coal on public health.

We now need an independent up-to-date national assessment of the true costs of our own coal-fired power plants – in terms of public health as well as the climate. Then we can judge for ourselves exactly how “cheap” our electricity is, and what effective steps should be taken to diversify our energy mix, reduce carbon pollution and reap the public health benefits.

This article originally appeared in The Conversation and is re-posted in full with permission.