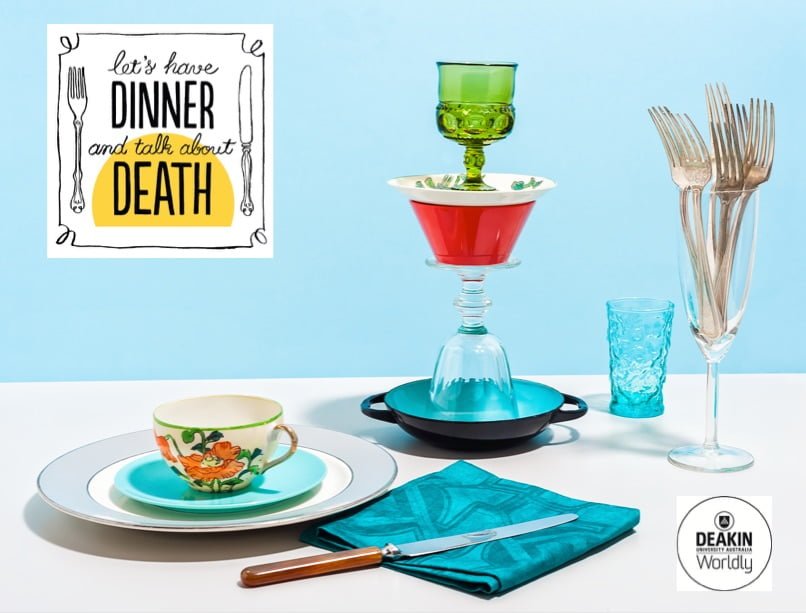 What song would you like at your funeral? And other death-changing questions to kick off #17APCC

Who do you want by your side when you die?

These and other such questions about death and dying were asked of participants during a #DeathOverDrinks event in Adelaide on Tuesday night, ahead of the opening of the Australian Palliative Care Conference on Kaurna country in Adelaide today (Wednesday).

The exercise illustrated the power of conversation in improving end of life experiences.

More than 800 people are attending the #17APCC, which journalist Marie McInerney is covering for the Croakey Conference News Service.

These were not the polite and often stilted conversations of your usual pre-conference drinks event.

First everyone gathered in little groups, and we were invited to “bring a loved one to the table”, someone close to us who had died.

Colleagues and strangers toasted each one, many tearing up as groups lifted their glasses to parents, partners, friends and other important losses. 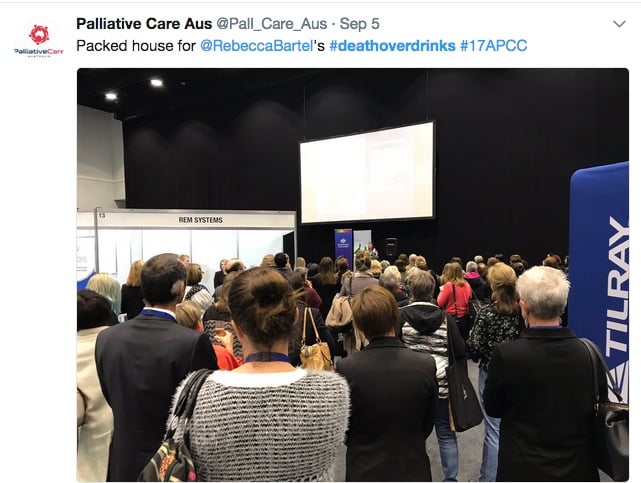 The questions began a bit lightly: What music or song would you like played at your funeral?

The night’s playlist included Leonard Cohen’s Hallelujah of course, Amazing Grace, and the ever-hopeful Staying Alive by the Bee Gees.

Then the questions got a little tougher.

Who would you call if you only had one more call to make?

Other than pain, what scares you most about dying?

Who do you want with you when you die?

The Deakin #DeathOverDrinks is a variation of #DeathOverDinner, a movement launched in the United States by chef Michael Hebb to encourage people to talk to their loved ones about their end of life plans, in the knowledge that it can help to bring a good death.

It was an apt and effective curtain raiser for the National Palliative Care Conference. It was led by Rebecca Bartel, now Executive Lead at the Institute for Healthcare Transformation at Deakin University’s Faculty of Health, who was instrumental in the launch of the Australian #DeathOverDinner last year. 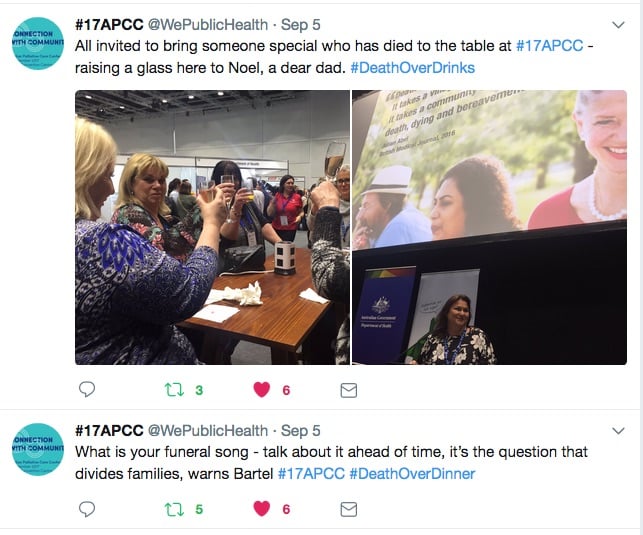 Bartel opened the event by introducing her mum, Jan, through a series of photos.

“She was pretty fabulous,” she says. “Very Sydney, very Double Bay, on a good day she was like Patsy from AbFab (Absolutely Fabulous).”

But this “glamorous, amazing woman just had a really terrible death,” she told delegates.

Diagnosed with acute myeloid leukaemia, Bartel’s mother underwent “too many rounds of chemo, a lot of futile medical treatment”.

“She was shuffled in and out of hospital, never offered any palliative care, never asked what she wanted and she died a really textbook horrible death. And it really haunted me,” she later told Croakey. 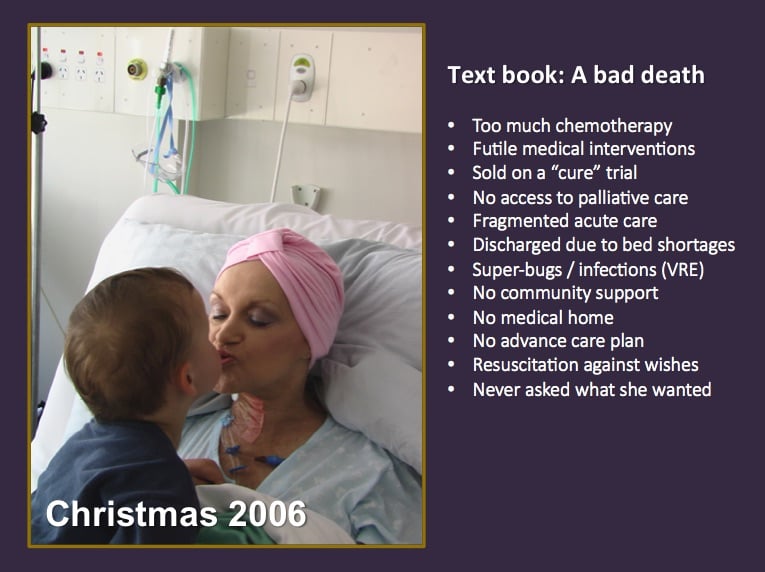 Bartel comes from a medical family that includes GPs and professors of medicine, and has worked in a range of health organisations.

She thought if she couldn’t make things better for a loved one, then what would be the experience of people with no health background?

Working as executive director of the Australian Centre of Health Research, she led a “deep dive” research project on end of life care that examined the evidence to investigate, “if we could make one intervention, what would make the difference”?

The answer was end of life conversations with loved ones, in time to influence how death comes – that is, conversations over fundamental choices “with family and loved ones at the kitchen table – not in the intensive care unit when it’s too late”.

“When people have end of life conversations, they actually get much better care, they are more likely die at home not surrounded by doctors and machines, and their families don’t suffer,” she said.

Sadly, Bartel says, too many people die in a manner they would not choose and too many of their loved ones are left feeling bereaved, guilty, and uncertain.

Around 70 per cent of Australians would prefer to die at home but less than 20 per cent do, according to her paper, Conversations: Creating Choice in End of Life Care.

Most, she says, will die in a care institution, such as a hospital intensive care unit, where there is a “significant mismatch between what people most often say they want (supportive services) and the services they actually get (acute care)”.

That’s not always within the individual person’s control, with access to care largely determined by age, diagnosis and geography, rather than individual need.

Most doctors try to do their best, she says, but many people get caught up in the system, often resuscitated or given futile treatments whether they want them or not.

“Unfortunately now death is so medicalised and institutionalised that it’s the default,” Bartel said. 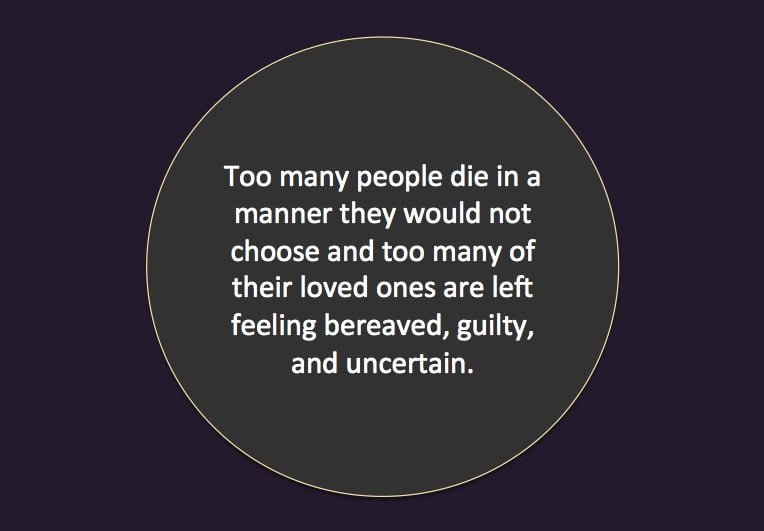 Death Over Dinner in the US claims to have inspired more than half a million people to sit down to a meal and discuss end of life, helped shift policy and funding for advance care conversations.

In Australia, Bartel says it has started off small but with big backing, a list of influential ambassadors who include media leader Arianna Huffington (Huffington Post founder), musician Ben Lee and a host of medical heavyweights.

There was almost a #DeathOverDinner on The Bachelor, Bartel laughs.

But these conversations are also being hosted in aged care homes, Indigenous communities, and at private homes seeking to encourage people to take more control over how their lives will end.

Bartel says “It’s ultimately about people taking control… If they want to die at home, surrounded by family, it’s about giving them the tools and the processes so they can have conversations with family and doctors and die on their own terms.” 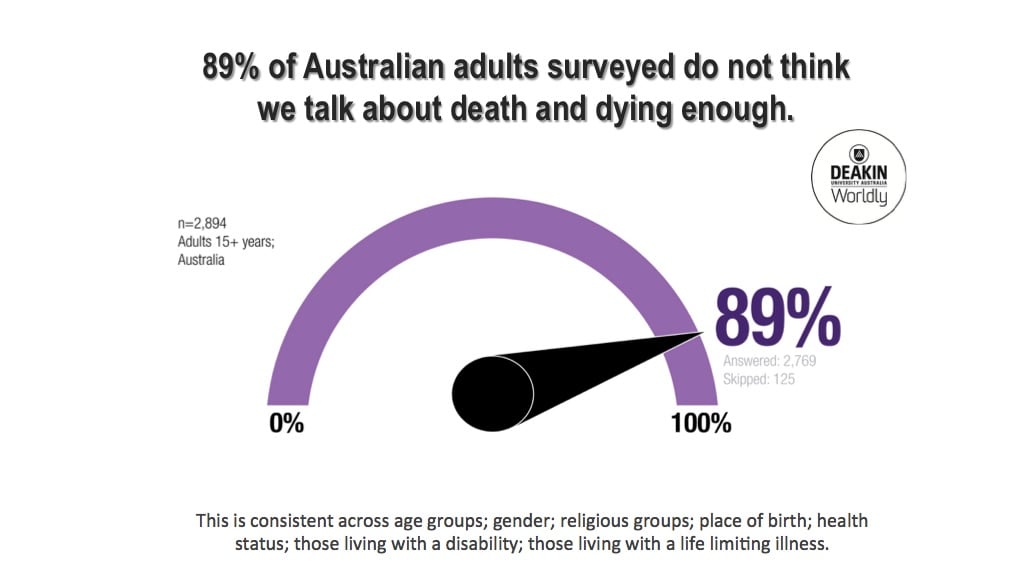 Watch this interview with Rebecca Bartel

Tweets and selfies from the first day of the conference 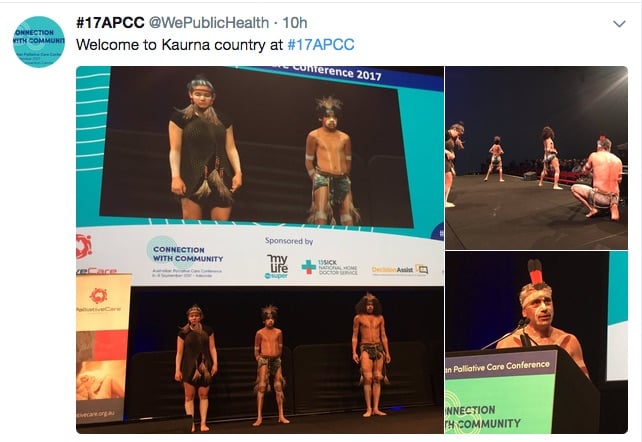 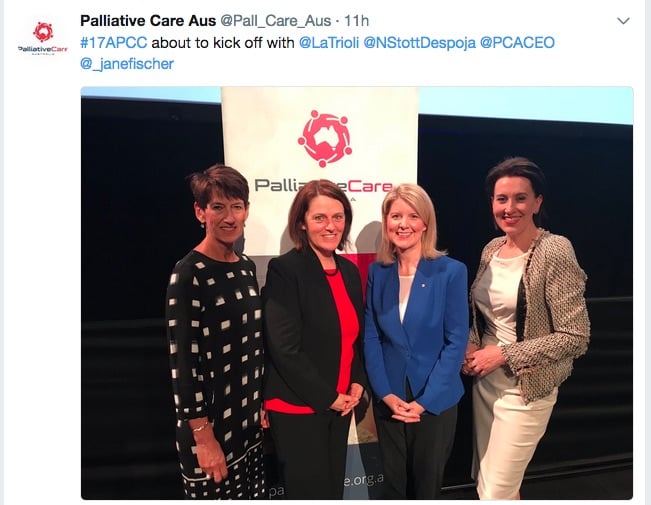 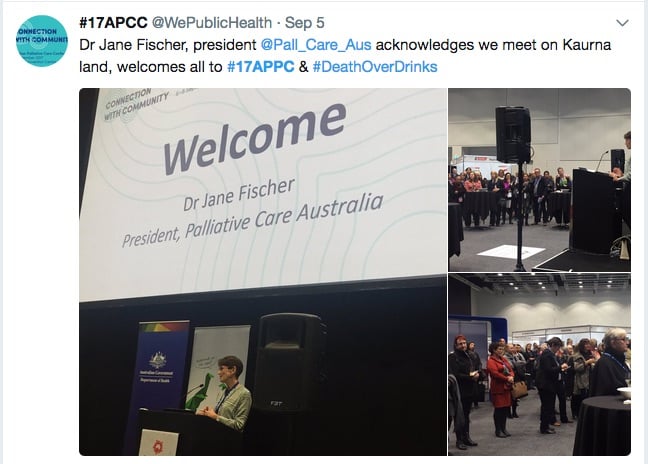 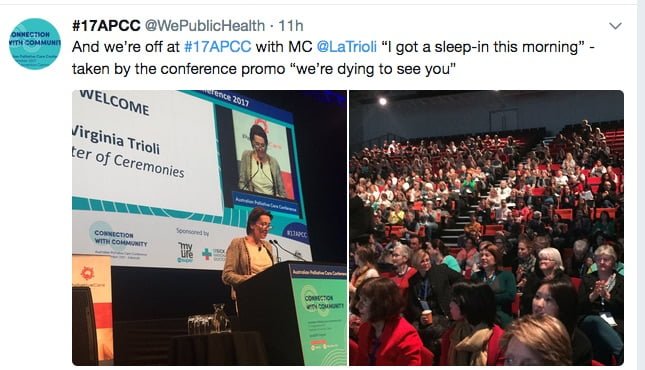 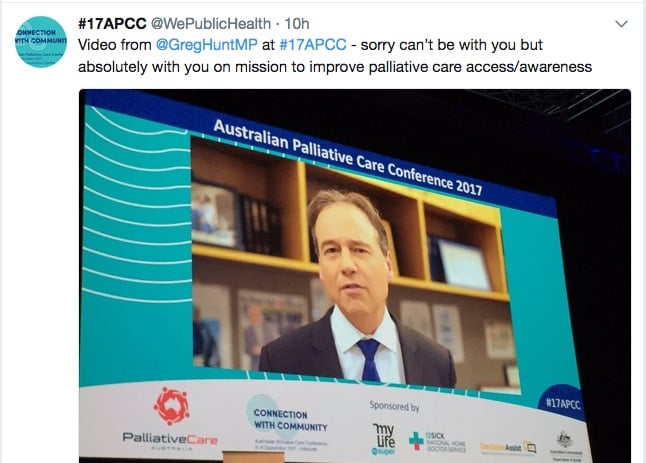 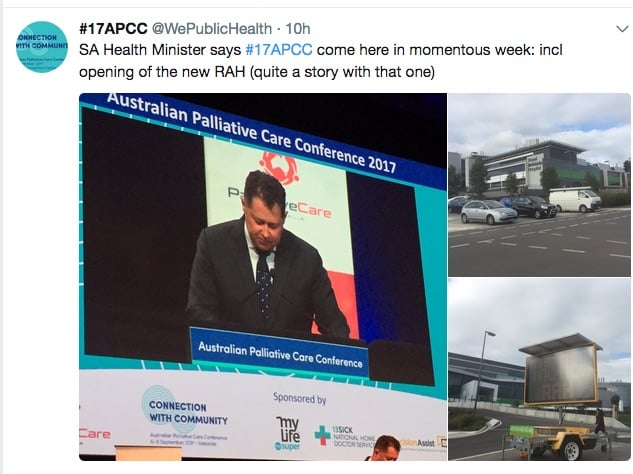 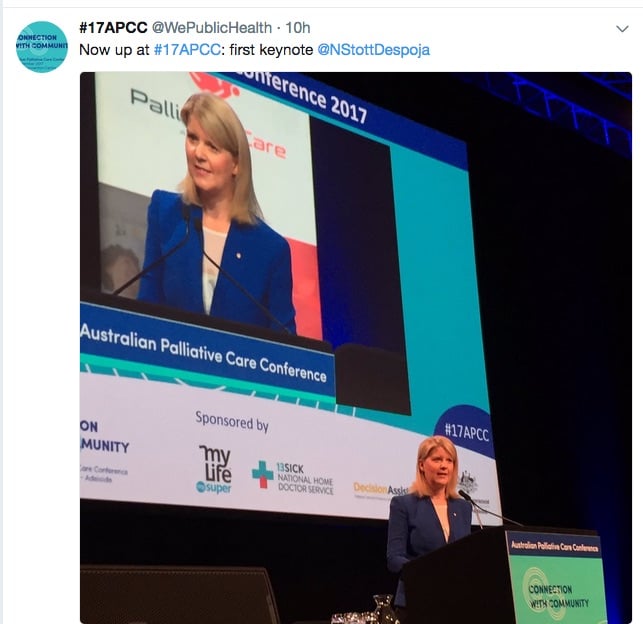 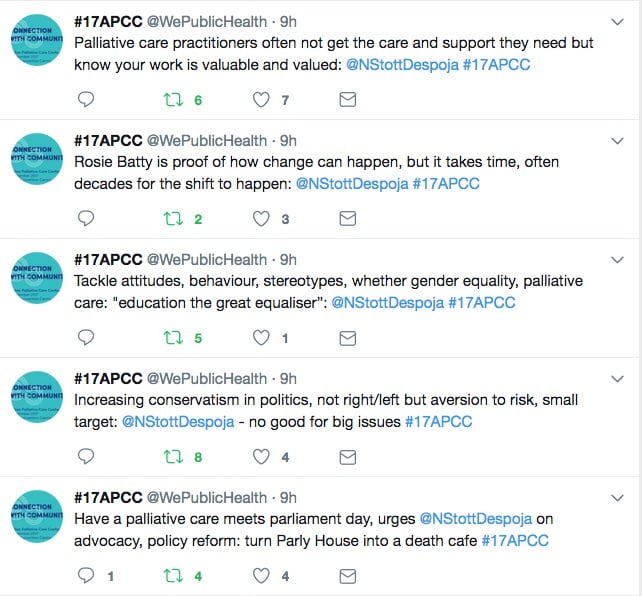 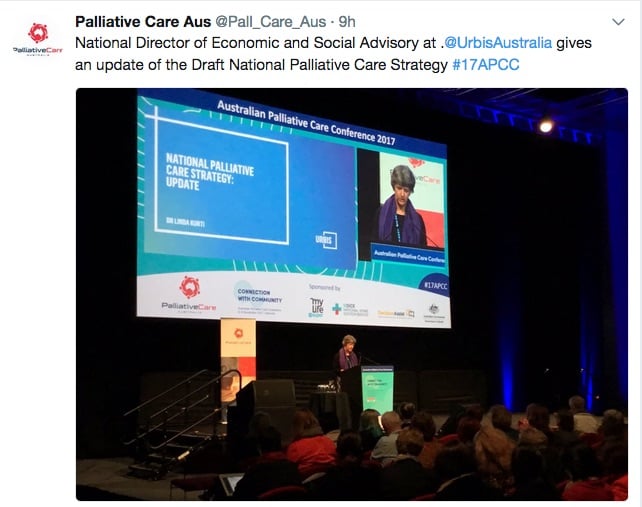 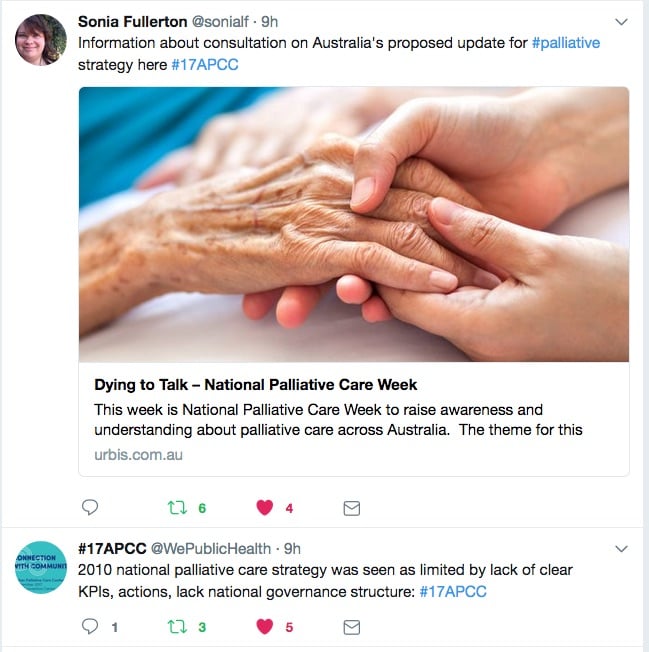 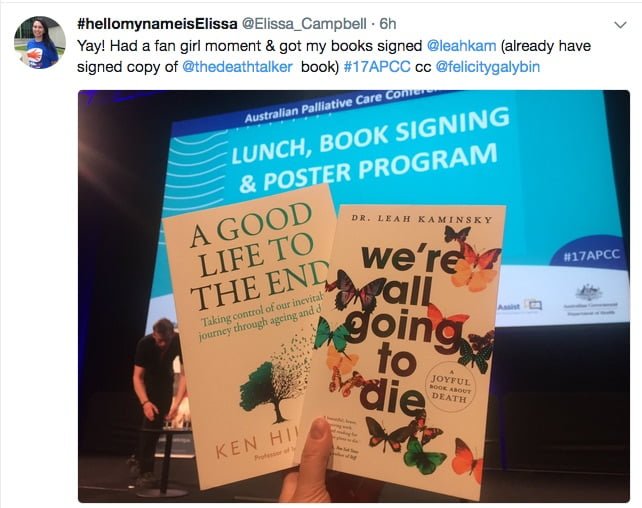 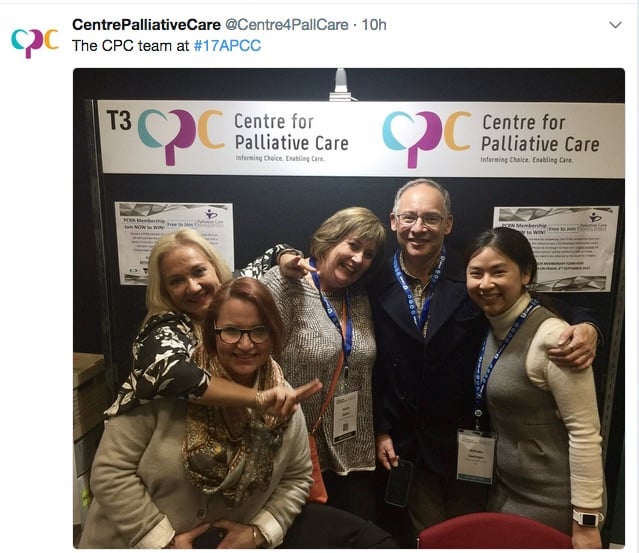 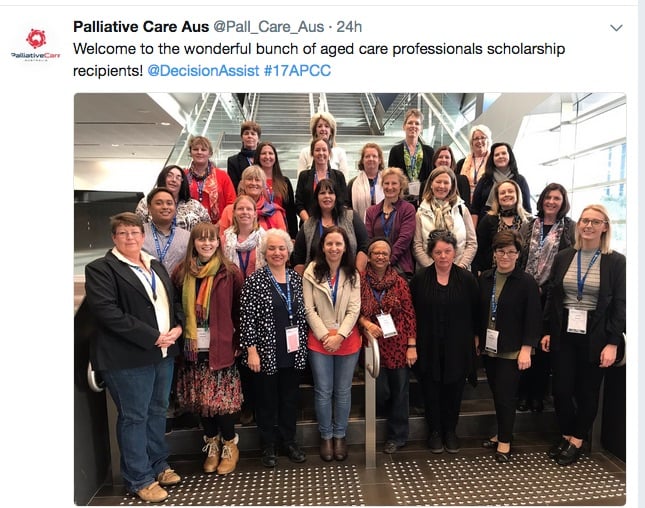 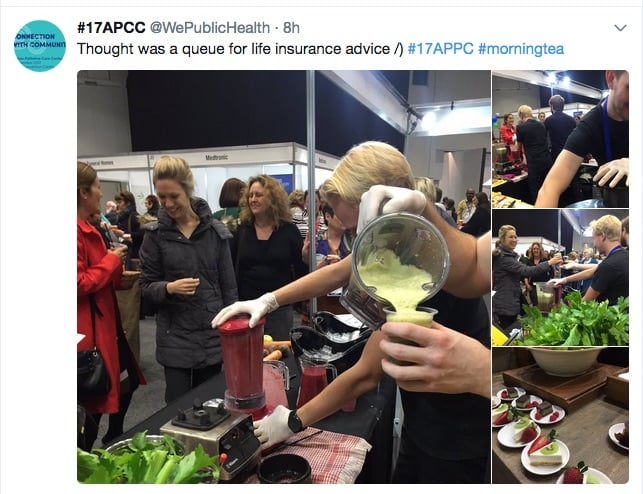 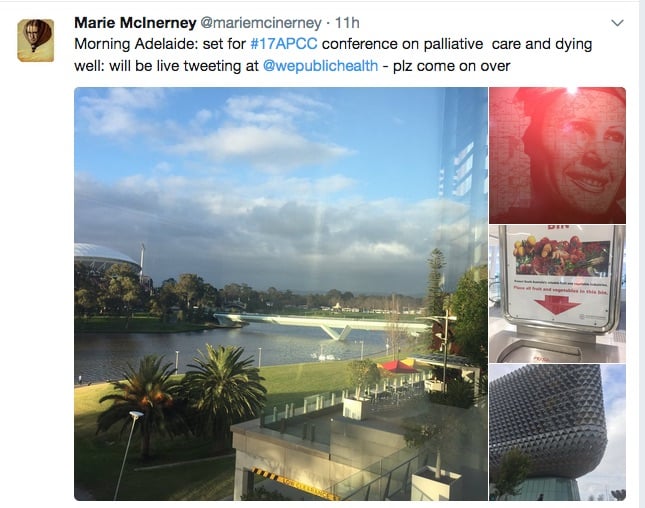 PrevPreviousLet’s talk about sex – and also find some sexual healing. Theme songs from #TheMHS2017
NextWorking with difference in grief and loss: insights from a “wounded healer”Next