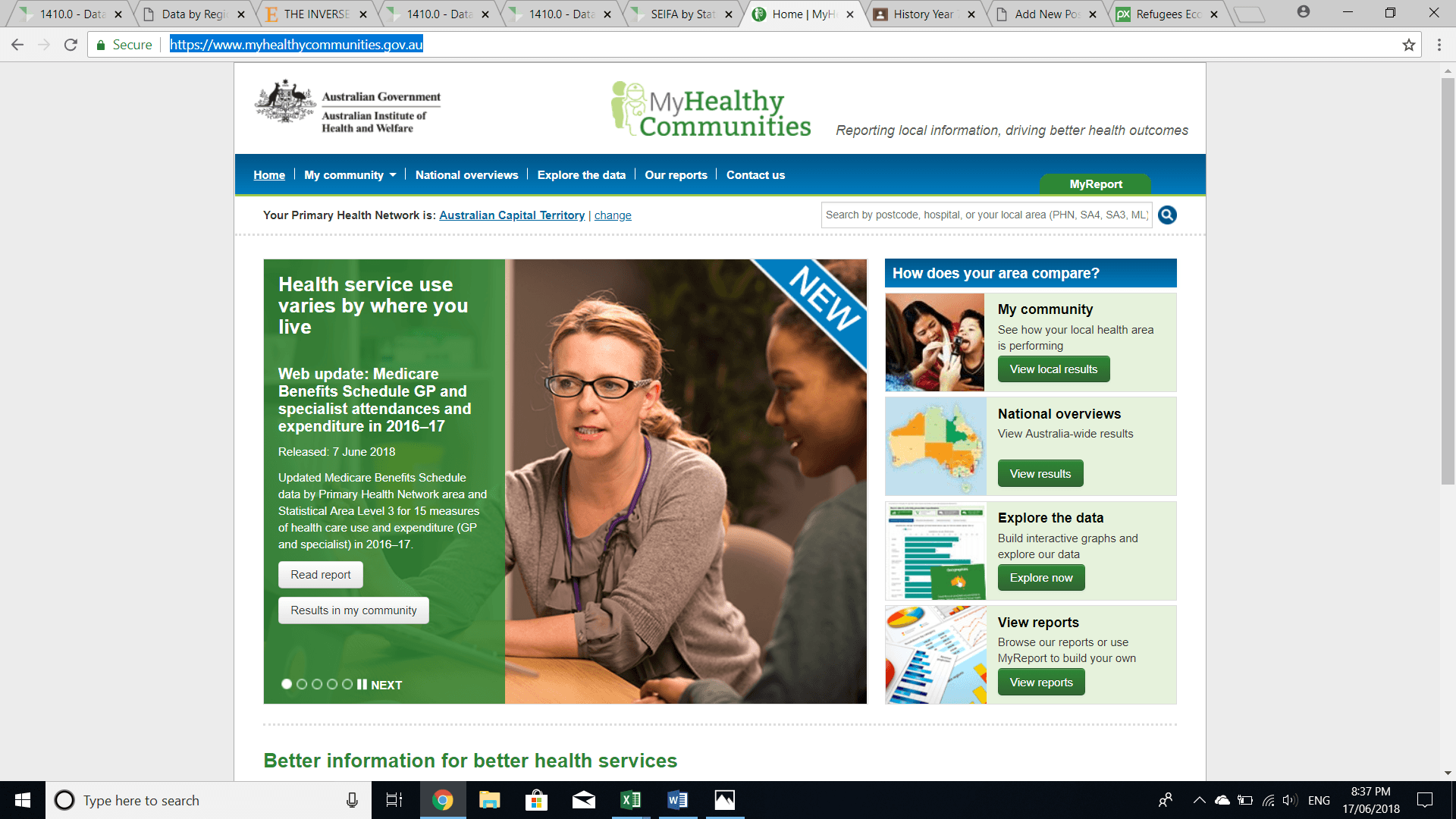 What the MyHealthyCommunities data tells us about the Inverse Care Law

What does the latest data on Medicare spending and health risk factors tell us about the way in which we allocate funding and approach preventive health? Jennifer Doggett highlights some of the key learnings from the latest release of data from My Healthy Communities in the piece below.

Some recent data released by the Australian Institute of Health and Welfare (AIHW), via the MyHealthyCommunities website, provides some useful information about the distribution of Medicare spending and service utilisation across Australia and  how this correlates with key health risk factors.

The findings are based on the Department of Health Medicare Benefits Schedule claims data for 2016–17. This new information provides four years of results are available for Primary Healthcare Network (PHN) areas.

Another useful finding from this data is how strongly the different health risk factors are correlated with each other.  The data covers five risk factors: smoking, alcohol intake, overweight/obesity, physical inactivity and high blood pressure.

The tables below show the number of times each PHN appears in the ‘Top 10’ or ‘Bottom 10’ PHNs for each risk factor.  The darker the colour the more times the PHN appears.

What this demonstrates is that, in general, the areas that rate the worst for one risk factor score poorly for most of the others.  Similarly, those areas who score highly in one area also tend to do well in others.

This is important as it suggests that risk behaviours are not individually determined factors that should be targeted separately but part of a broader pattern of inter-related behaviours that should be addressed as a whole.   It supports a regional or community approach to health promotion and prevention, rather than a behaviour-specific strategy, such as an anti-smoking campaign that seeks to reduce one risk behaviour in isolation.

The green PHNs in the tables below are those appearing in the ‘Bottom 10’ PHNs for the five risk factors measured.  The darker the green the more times the PHN appeared in the lists.  The red PHNs are those appearing in the ‘Top 10’ for each risk factor.  The darker the red the more times the PHN appeared.  As is clear from looking at the tables below, most of the PHNs with low (or high) rates of one risk factor also have low (or high) rates of the other risk factors. 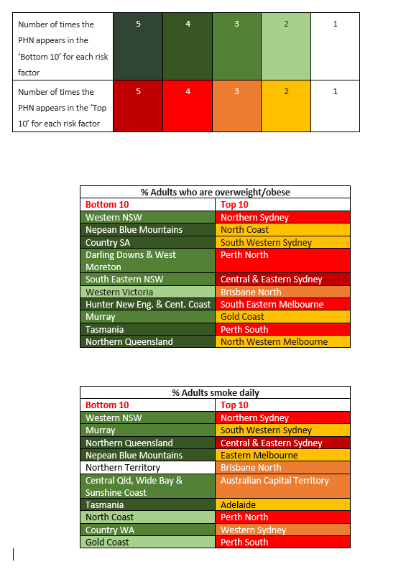 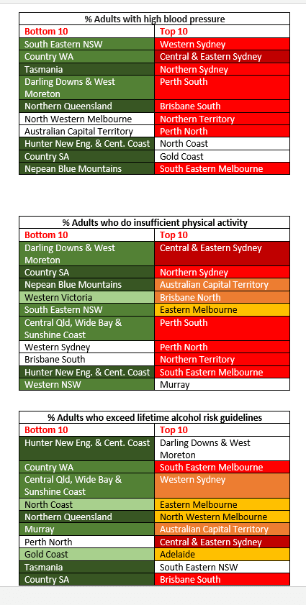 This data also demonstrates the effect of the inverse care law, in particular in relation to specialist services.

The inverse care law is the principle that the availability of good medical or social care tends to vary inversely with the need of the population served. It was proposed by Julian Tudor Hart in an article in The Lancet in 1971.

In the article Tudor Hart quotes sociologist Richard Titmuss who explained the reason why this occurs:

[quote]”We have learnt from 15 years’ experience of the Health Service that the higher income groups know how to make better use of the service; they tend to receive more specialist attention; occupy more of the beds in better equipped and staffed hospitals; receive more elective surgery; have better maternal care, and are more likely to get psychiatric help and psychotherapy than low-income groups particularly the unskilled. Richard Titmuss, Commitment to Welfare. London, 1968 ”[/quote]

A similar pattern is evident when looking at MBS spending on GP and specialist services by area across Australia.  Despite the health status of the population being worse in regional areas than in the cities, and worse still in remote areas compared with the regions, the MBS spend is greatest in urban areas with high SES status and lowest in remote areas.

Of course, this data does not tell the entire story.  It takes account only of MBS spending and does not include other sources of health funding, such as Aboriginal Medical Services, public hospitals and state government-funded services, which together may provide a significant amount of care in some areas.

However, at the very least it challenges the position of Medicare as a universal health insurer and questions the way in which our funding system can preference those least in need of health services.