What will funding cuts to universities mean for the future health workforce? (Part One)

A $2.2 billion funding cut to universities, announced last month in the Federal Government’s midyear economic and fiscal outlook, will no doubt have implications for the composition and size of the future health workforce.

In the first of two articles examining the implications of the cuts for the health sector, Conor King,  Executive Director of  Innovative Research Universities, suggests the growth in health enrolments that has occurred over the past several years is unlikely to continue.

From 2012, Australia’s universities have been funded for each student they enrol, allowing a strong match with interest in a university education. This system is called the demand driven university funding model.

Universities began to expand enrolments from 2010, following announcement of the changed funding. It is now under threat following a Government decision to freeze university funding at 2017 amount.

The model does not apply to medical places, which remain controlled. Other disciplines also have limits due to infrastructure such as dentistry training chairs.

This has changed the balance of students by discipline (see Figure One below). In 2010, health courses accounted for 17.4 percent of graduates, and this had risen to 20.4 percent by 2016. 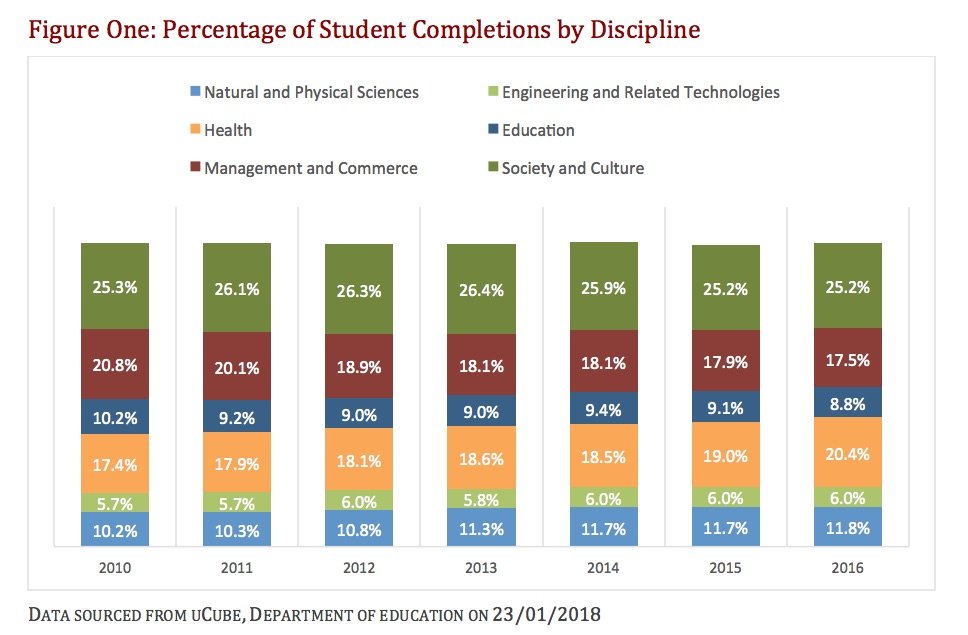 Table One shows the growth from 2012 to 2016 in student full time equivalent enrolments for various health sub disciplines.

This level of data is not available for completions, with Table Two showing the overall health completions each year.

Against an overall 21 percent growth in undergraduate students from 2010 to 2016, STEM disciplines show higher than average growth with health enrolments increasing by 38 percent, or 27,000 additional enrolled students.

Looking at the health sub disciplines, the growth is more variable. The growth is strongest for rehabilitation therapies (50 percent), the small number of optical science students (40 percent), nursing (33 percent), and other health (39 percent).

Some have declined, although these are undergraduate numbers so may be a sign of increasing use of postgraduate enrolments in some areas.

Student completions show a similar pattern with a 16 percent increase in completions for all disciplines between 2012 and 2016. Health graduates increased by 3,500 or 26 percent. Graduates from 2013 increasingly are likely to have enrolled following the announcement of demand driven funding. 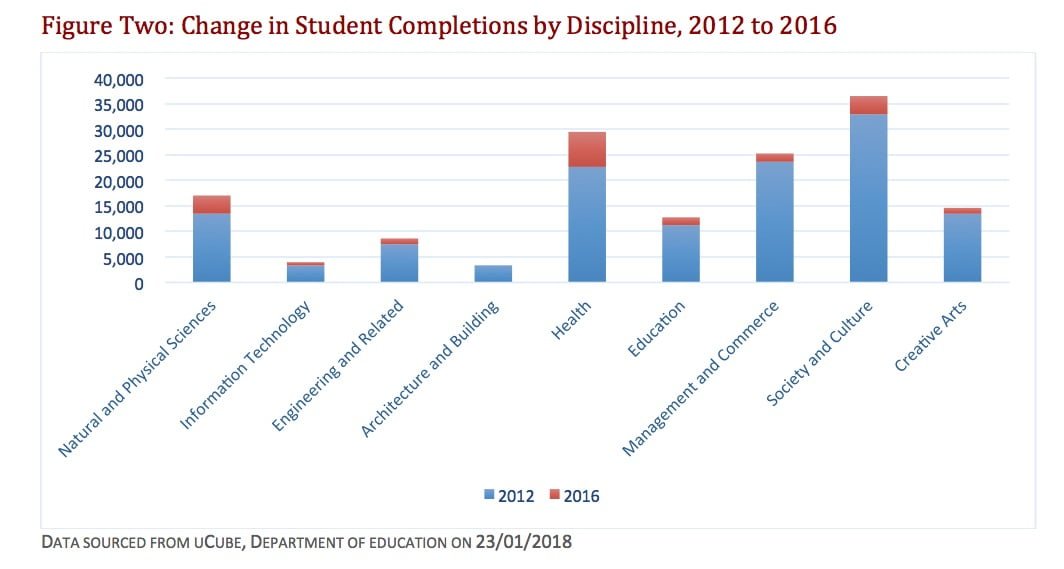 The reason for the higher growth in health and other generally high cost disciplines is simple.

Prior to demand driven funding, universities were funded for a set number of students but could enrol others receiving the student payment but no Government money. For students in lower cost disciplines, especially in business and law, this made sense. The Government contribution is small, such that universities could enrol at the margin additional students.

That does not work for health courses. Hence, when all students became funded, universities were able to respond to demand in the health areas.

This may now change. After failing three times to pass a package of changes through the Senate, the Government for 2018 and 2019 is freezing Government funding to universities at the precise dollar amount received in 2017.

This means that universities will not get an adjustment for inflation nor Government funding for any further increase in student numbers. They will get the student payment for all students.

This returns the incentives back to where they were before demand driven funding – that it is better for universities to contain numbers in health programs and target social science and humanities courses.

• In the next article in this series, Andrew Norton, the higher education program director at the Grattan Institute, explores some of the implications of the funding cuts for health courses and the health workforce, in the short and longer term.