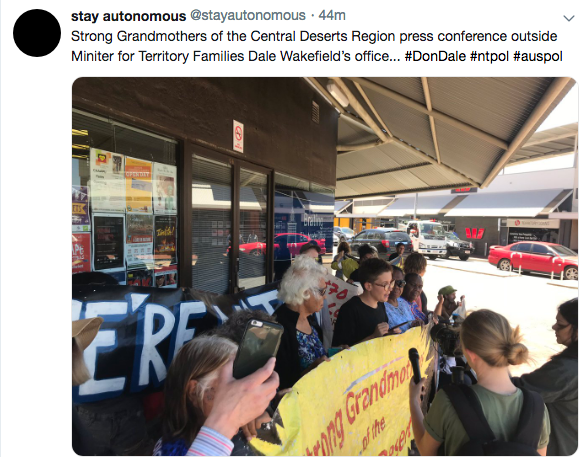 What will it take to bring real reform to juvenile justice in the NT?

Next week marks the first anniversary of the release of the findings of the Northern Territory Royal Commission into the protection and detention of children. But it seems little has improved for children who find themselves in the hands of the NT criminal justice system.

One of the Commission’s more than 230 recommendations was that the notorious Don Dale Juvenile Detention Centre be closed, including the “immediate closure” of the Centre’s high security unit.

But the Centre, a repurposed adult prison where some of the incidents that sparked the Royal Commission took place, has remained open pending the building of a new facility, and this week was the scene of a “major disturbance” whereby two inmates reportedly attacked a guard, stole his keys, released other inmates and started a fire.

Police used tear gas to regain control (another modality proscribed by the Royal Commission), and all 25 detainees were transferred to Darwin Police Watch House, where they remained at the time of writing this post.

The ABC was reporting last night that the facility was now back in the hands of its operators, Territory Families, who said in a media release yesterday that “staff have started an assessment of the centre to evaluate the amount of damage to the facility and the essential works that need to be undertaken to restore operations.”

But human rights, community and Indigenous medical groups are calling for much more than a return to business as usual at Don Dale.

A media release from Amnesty International on Wednesday said this week’s crisis came on the back of months of reports of concerning conditions and incidents at Don Dale.

A case against the government regarding treatment of young people is before the court, allegations have been aired of girls being filmed whilst showering, and now this incident shows that Don Dale is at crisis point.

Both Alice Springs and Don Dale Detention Centres are at capacity. Don Dale is an old prison that wasn’t considered acceptable for adults, and is clearly not acceptable for children. There are issues around the training and numbers of staff. Lock-down is being used more frequently, and there are concerns about the ongoing use of isolation units.”

They wrote that the NT government needs to act now to address the underlying causes of youth incarceration.

Indigenous leaders in the NT already have the solutions. These incidents will keep happening unless the Government begins working in partnership with Indigenous communities, and funding Indigenous-led programs that support children to thrive in their communities, so they don’t end up in detention in the first place.”

A release from the Human Rights Law Centre on the same day also called for Don Dale’s permanent closure. Spokesperson, Shahleena Musk accused the NT government of “sitting on its hands”, and said its promise of  “the most comprehensive overhaul of youth justice and child protection in NT history,” was “all words, yet little action.”

I know that this is a cry for help from the kids locked away. Kids don’t act up for nothing – they act up when they are scared and they can’t be heard. If Four Corners taught the Government anything, it’s that kids should be given what I was denied – the opportunity to grow up supported and with freedom.”

But a further concern is that the NT government has not fully engaged with the Aboriginal community in designing and implementing youth justice reforms.

A full media release from the Aboriginal Medical Services Alliance Northern Territory, in which they once again offer to work in partnership with the NT government to enact the recommendations of the Royal Commission, appears at the end of this post.

Concerned Aboriginal families paid a visit to Dale Wakefield’s Alice Springs office today, to demand that she step down as Territory Families Minister, and that all children are released immediately from the Darwin Watch House, so that “they can be cared for in a trauma informed and culturally appropriate way.”

A statement from the families said Territory Families had failed to contact some of them in the wake of this week’s incident at Don Dale, and that they were concerned for their children’s wellbeing.

There are programs such as Bush Mob that have capacity to take those vulnerable children in- those children must be bailed to a program that can care for them.”

They planned to read out the following statement:

“We, the Strong Grandmothers of the Central Desert Region and Shut Youth Prisons demand that

The power of involving community

An edited extract of a recent speech by Mick Gooda, who headed up the Royal Commission along with Margaret White, was published in the Guardian this week, and is well worth a read.

Gooda noted that the Commission’s investigations turned up more than fifty previous “inquiries, reviews and reports” on out-of-home care and juvenile justice, but that the recommendations often failed to involve the Aboriginal community in their development and implementation.

He said the Royal Commission’s report made the case for community engagement, and that there was a “terrific appetite from the community to take up the challenge themselves and on their own terms.”

…there needs to be an intense effort of engaging communities at the community level to participate in decision-making but also keeping the governments to account for the implementation of our recommendations.

…It is only the power of community that will keep governments accountable and hopefully our recommendations would not only have gone a long way towards rectifying the particular issues we were asked to address, but also implemented the structural change to ensure government accountability.”

This week’s events prove that there is still a long way to go, but Croakey would encourage the NT government to embrace Indigenous offers of partnership, such as the one from AMSANT below.

“AMSANT is extremely concerned about the welfare of the children and staff currently held or working in the detention facilities”, said AMSANT CEO, John Paterson. “The fact that police were called and tear gas was used and that the children are now languishing in the Darwin Watch House indicates that what is currently being done at Don Dale is not working.”

“We are calling for better and more effective engagement with Aboriginal leadership in dealing with this crisis”, Mr Paterson said.

“AMSANT’s offer to partner in brokering solutions still stands and we urge Territory Families to engage with us and other Aboriginal leaders more closely. At present there are serious questions over whether the Northern Territory Government has in place the capacity to manage the change processes required for these reforms.”

“There remain significant issues around the training and numbers of staff, and an ongoing situation of children being subject to long periods of lock-down. It’s a pressure cooker situation that will keep resulting in serious incidents such as occurred yesterday.”

“Of the children in detention at least half are in the child protection system and many are on remand. We call for urgent action for the release of young people held on remand (not yet sentenced) with non-serious offences to be returned to community and families as a matter of priority.”

“Moving to a youth development approach within these facilities, as recommended by the Royal Commission, is not being approached with the urgency required. More should be occurring by this stage down the track, such as the establishment of an elders visiting and mentoring program, which is an obvious gap at present. With new facilities not due to open till 2021, this is too long to wait for the changes needed.”

“AMSANT is also concerned that the government has decided to plan for only two, expensive, urban based facilities in Darwin and Alice Springs. We have advocated for smaller, regionally based facilities that will enable the engagement of families in the development of their children.”

“We need the government to work in partnership with us. Ultimately, a stronger focus on Aboriginal-led programs that support children and their families in communities so they don’t end up in detention in the first place, is where we need to be”, Mr Paterson concluded. 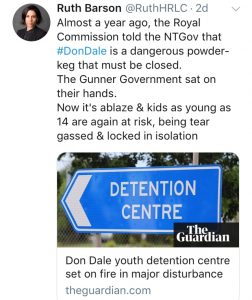 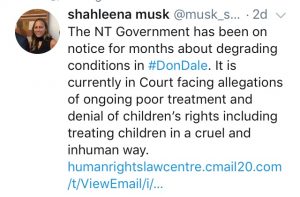 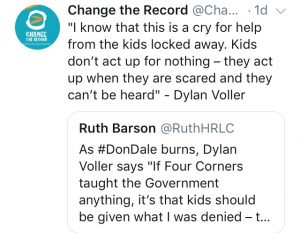 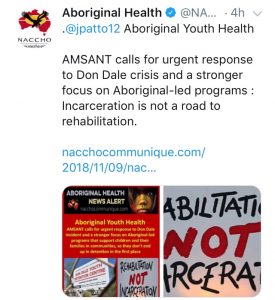 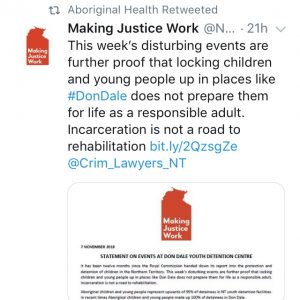 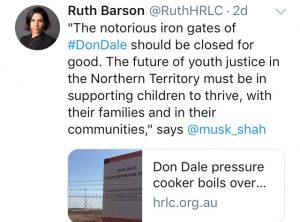 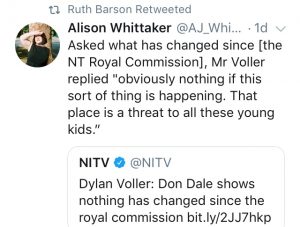 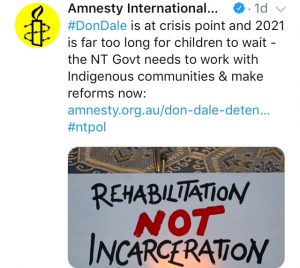 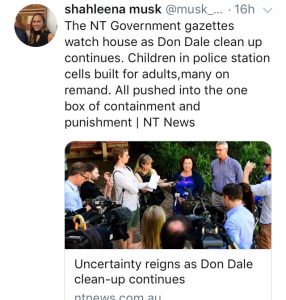 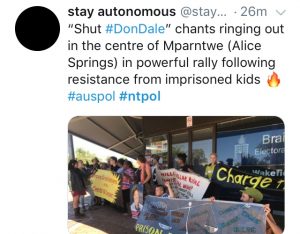