Home The Croakey Archives Croakey Conference News Service 2013 – 2020 2019 Conferences #VMIAC2019 What will it take to expand the role of peer workers in mental health? 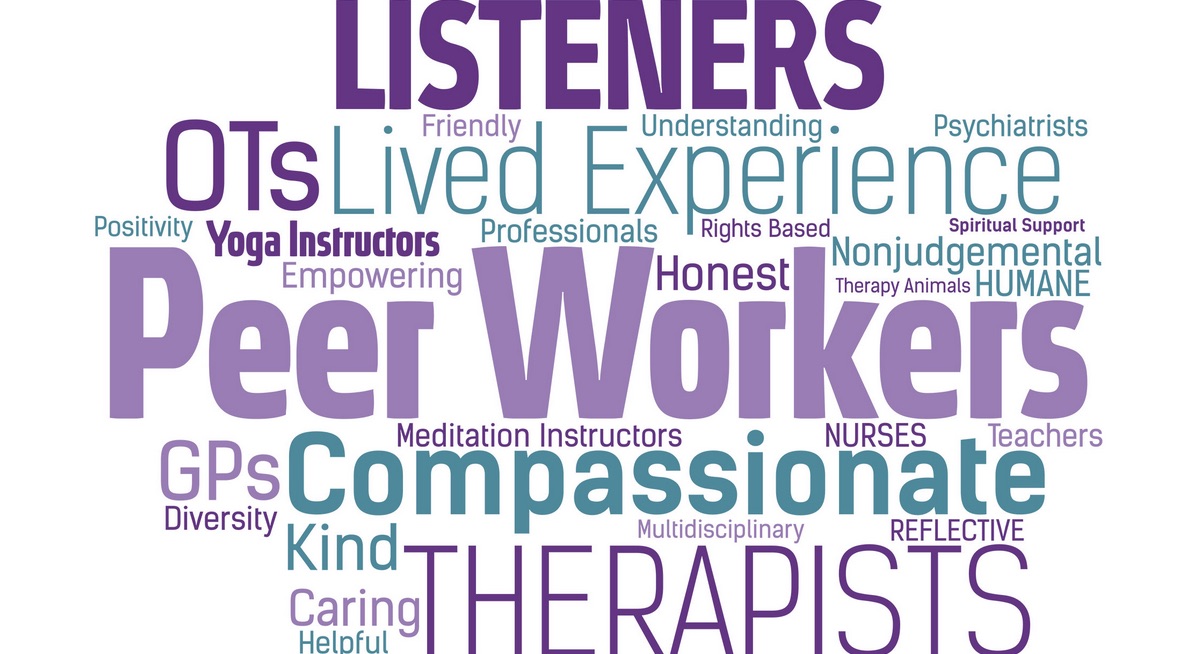 Word cloud from the VMIAC Declaration

What will it take to expand the role of peer workers in mental health?

The Productivity Commission inquiry into mental health has called on health services and medical colleges to address the bias, discrimination and bullying that peer workers are experiencing from other health professionals, and which is hindering the benefits they can deliver in mental health care.

In its draft report, the Productivity Commission also says peer workers – people employed on the basis of their lived experience of mental illness – should have their own professional body to influence policy change and be supported with a comprehensive system of qualifications and professional development.

Mental health consumers have welcomed the support for peer work in the report but have reservations about the Productivity Commission’s approach and understanding as part of broader concerns that the consumer voice is missing in its inquiry to date.

The Productivity Commission says a professional mental health peer workforce is “a relatively new and still developing concept” and backs calls from consumer and carer groups for an expansion of the peer workforce and the roles peer workers can perform.

It cites “growing evidence that peer workers can facilitate better outcomes because having lived experience gives them a unique ability to develop trusting relationships with clients and provide them with hope”.

However, it highlights major “problems” raised during its inquiry that not only hinder the impact of peer workers but also put their own wellbeing and recovery at risk and expose worrying levels of stigma and discrimination about mental health among health professionals.

It says that peer workers are “often under-valued, marginalised, discredited and sometimes bullied by the people they work with because of scepticism about the abilities of people with lived experience of mental illness, their professionalism and validity of their qualifications”.

Croakey reported on some of these issues in a 2017 story about the “anxiety and hostility” shown by clinicians at a Victorian adult mental health inpatient unit when plans were unveiled to introduce a peer workforce.

One of the project leaders said she was “taken aback” by the level of opposition to the plan from clinical staff, who feared for their own jobs or roles, and also worried they may have to work alongside people who were not fully “recovered”, and no longer be able to “joke or let off steam” in the lunchroom about patients.

Other problems highlighted by the Productivity Commission (in its own words) were:

To address these issues, the Productivity Commission recommends a number of strategies, including educating health professionals about how peer workers can improve outcomes for their patients, and demonstrating those benefits “are real” in more trials and projects.

It says governments have an important role to play in this, as major funders and providers of mental health services, but that non-government service providers “will also need to drive improvements in their workplaces”.

And it calls on health professional bodies, including the medical colleges, to “play a role in changing attitudes in their professions”.

Identifying the “under-utilisation” of peer workers as a major mental health workforce issue, the report includes recommendations of peer and clinician led after hours and mobile crisis services that are alternatives to Emergency Departments, such as the Safe Haven model, and possible support for prisoners experiencing mental health issues.

It also highlights structural barriers to peer work, saying mental health care for people with more complex or severe problems is optimally organised through a multidisciplinary team – for example, a psychiatrist, a psychologist, a GP, a mental health nurse, a social worker, a peer worker, an employment support worker, a housing officer and others.

But it notes: “This fact, and together with the inability of fee for service to generate this kind of teamwork, has already been acknowledged by the Department of Health.”

“Not a pathway, a career in itself”

The Productivity Commission report was published as around 200 mental health consumers met in Melbourne at the recent biennial conference of the Victorian Mental Illness Awareness Council (VMIAC), which showcased the benefits of peer workers and peer work in a number of sessions.

Former VMIAC chair Vrinda Edan, who has held consumer roles in mental health services and research for the last 20 years, said she had concerns about the report’s approach to peer work.

“I find that really, really concerning,” she told Croakey, adding that many people like her had dedicated their working lives to peer work.

“It’s not a pathway to another profession. It is a profession, it is a career,” she said.

Consumer peer worker Tim Heffernan, Deputy Commissioner at the Mental Health Commission NSW, told Croakey he was pleased the report highlighted the need for a national peer workforce organisation but said the more urgent need was for a national consumer voice to government.

He said there had been significant investment from the former Labor Government and the then Mental Health Minister Mark Butler in 2011 to develop such a voice but it was “abandoned” in 2014 by the incoming Abbott Government.

“Until we have such a voice we only hear the voices who hold the power in mental health in Australia today,” he said, welcoming the announcement at #VMIAC2019 of the formation of the National Consumer Peak Alliance as “an effort to construct that national voice with no funding”.

Heffernan said he was also concerned the Productivity Commission “does not yet have a fully developed understanding” of the mental health peer workforce and overlooked some  important, long-established peer-run services, such as BookRED in Queensland.

“The section on peer work focuses mostly on the problems that need to be fixed rather than on the positive stories about what is happening in this sector,” he said, adding his concern that “this reflects the lack of a strong consumer voice” overall in the Commission’s report.

Victoria has been running and assessing the Expanding Post Discharge Support Initiative, where peer workers are providing additional support for consumers with complex mental health issues following their discharge from a number of specialist mental health services. 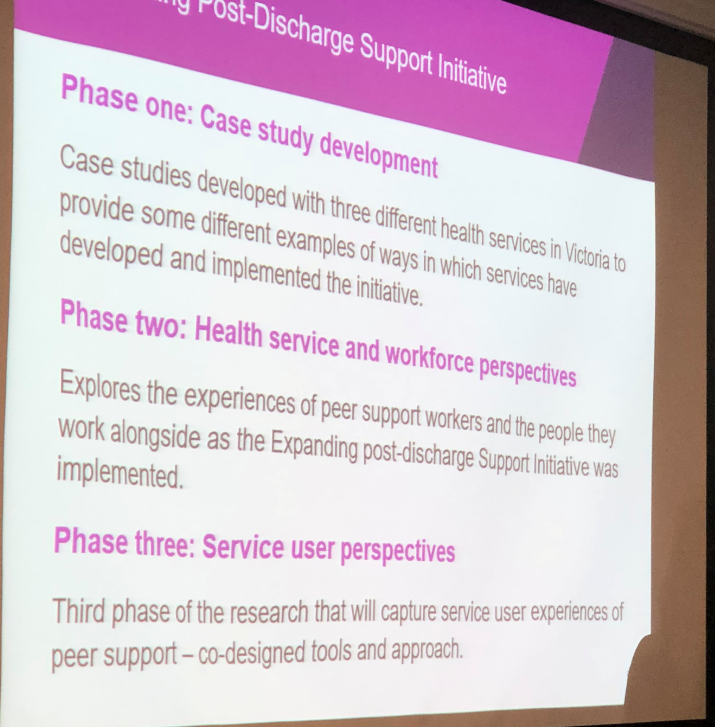 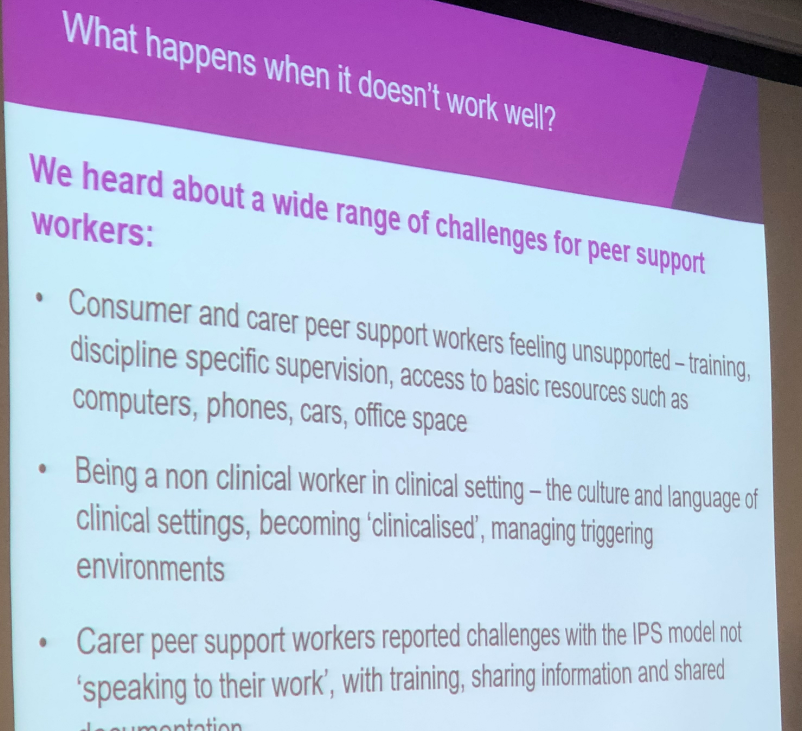 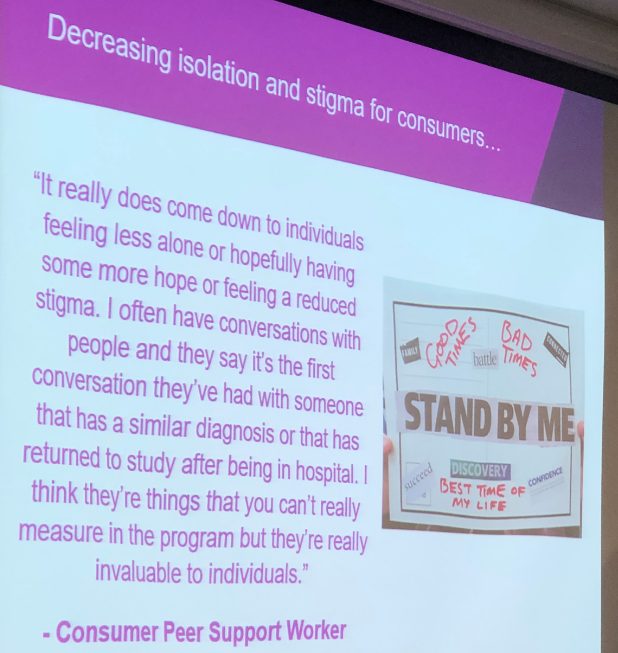 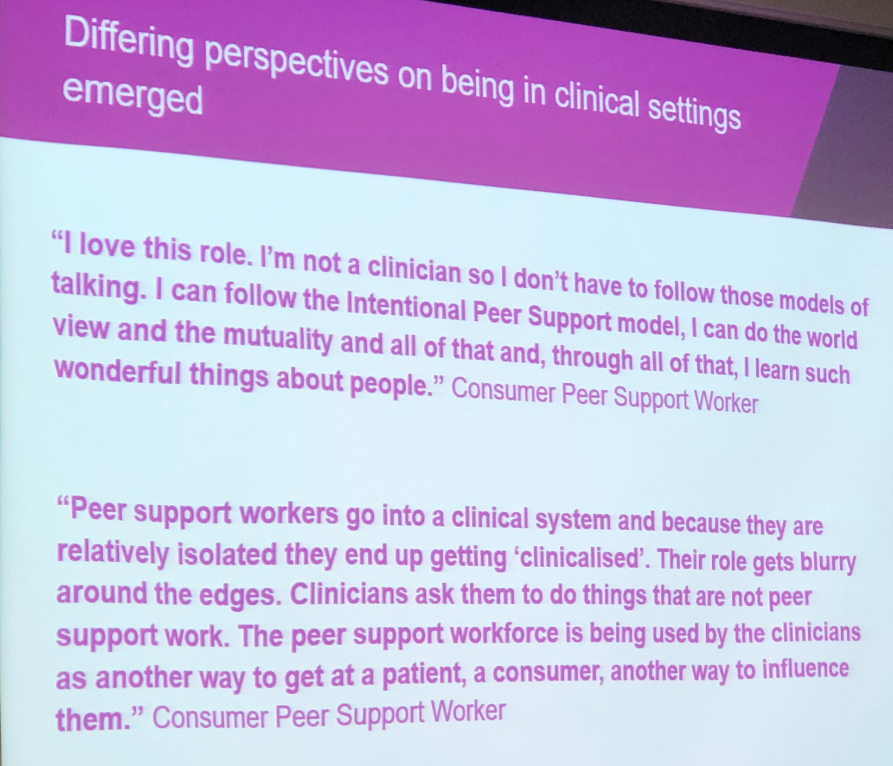 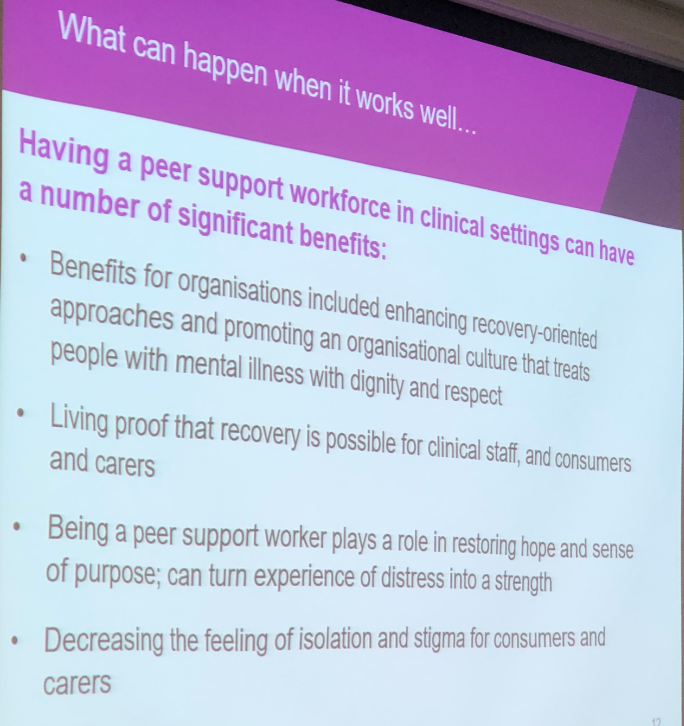 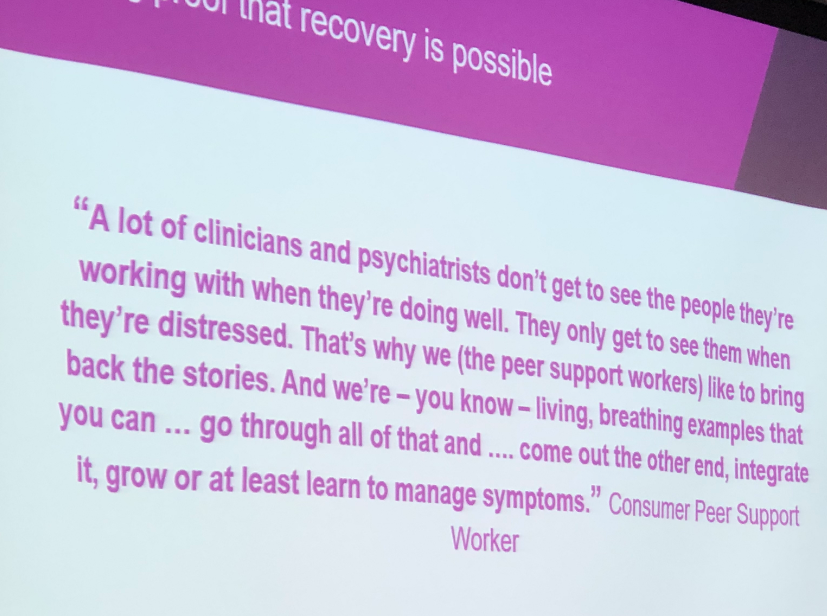 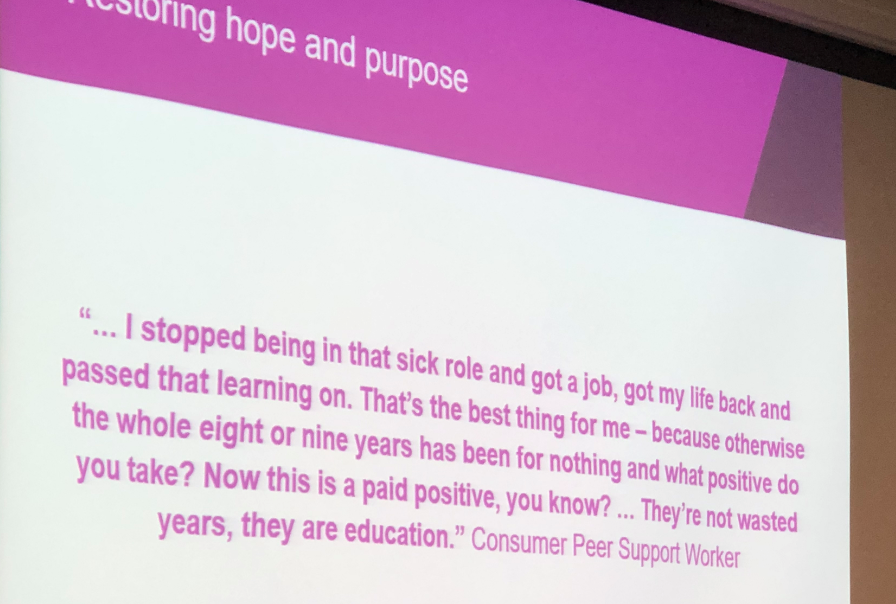 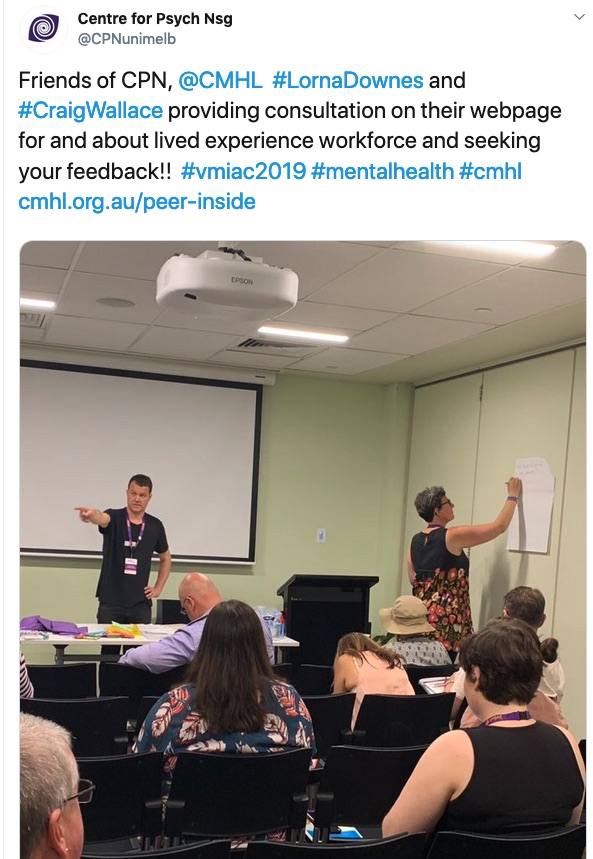