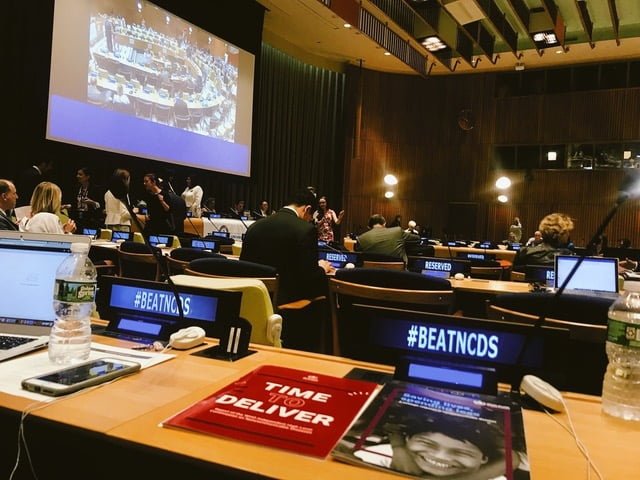 What will it take to get IndigenousNCDs into the UN Declaration and onto the global agenda?

The clock is ticking on the efforts of those involved in the #IndigenousNCDs movement, to make the Member States sit up and take notice of the need for Indigenous peoples worldwide to be specifically included in the upcoming UN Political Declaration on the prevention and control of non-communicable diseases.

Marie McInerney reported for Croakey yesterday that such recognition was looking unlikely, with the federal Department of Health confirming that “the negotiation process [for the Declaration] is in the very final stages” before being ratified at a High Level Meeting of heads of state and government on September 27.

The post below comes from someone who has been here before. In the lead-up to the UN’s first High Level Meeting on NCDs, via her role at the Australian-based Child Health NGO, Caring and Living As Neighbours (CLAN), public health physician Dr Kate Armstrong was part of a coalition of civil society groups that sought, successfully, to have the needs of children and adolescents included in the 2011 Political Declaration.

Having seen what a difference a change in wording has made to the recognition and participation of young people in the global NCD discourse, Armstrong recently co-founded #IndigenousNCDs with Summer May Finlay, to advocate for Indigenous peoples to be similarly included.

Buoyed by experience and living in hope, she outlines a plan of action.

As mentioned in a previous article in this Croakey series, on 27 September 2018 the United Nations (UN) will host the third High Level Meeting (HLM3) on non-communicable diseases (NCDs) in New York.

As things stand, the Draft Declaration, dated 6 June 2018, does not mention Indigenous peoples, acknowledge the importance of culturally safe and appropriate approaches to the prevention and control of NCDs, or reference the United Nations Declaration on the Rights of Indigenous Peoples (UNDRIP).

These omissions present a serious and urgent public health conundrum.

Why does exclusion of Indigenous peoples from the global NCDs discourse matter?

As outlined previously, Indigenous peoples worldwide experience an inequitable burden of preventable morbidity and mortality due to NCDs.

Unequal exposure to a range of adverse social determinants of health (such as poverty, racism, unemployment, barriers to education, and unaffordable access to quality health care and services), and other NCD risk factors places Indigenous peoples at increased risk.

Within this context, language is vitally important.

An absence of language can be destructive.

As long as Indigenous peoples are not meaningfully acknowledged in the global NCDs discourse, their voices, experiences, priorities, solutions, successes and challenges will not be heard.

Member states will not be obliged to ensure Indigenous peoples and communities are actively leading, analysing, researching, planning, implementing, monitoring and evaluating culturally safe and appropriate solutions to #BeatNCDs. Indigenous peoples will not feature in global NCD action plans, nor their subsequent goals, indicators or targets.

As former WHO Director General Dr Margaret Chan has been famously quoted:

What gets measured gets done.”

Failure to specifically include Indigenous peoples in the Political Declaration on 27 September 2018 will undermine the rights of all Indigenous peoples to self-determination and the enjoyment of the highest quality of life possible.

And yet, amidst this doom and gloom, there is hope…

Learning from Civil Society’s efforts for children and adolescents

Ahead of the first UN HLM (HLM1) on NCDs in September 2011, the Draft Declaration did not include any mention of children or adolescents (despite the fact young people are affected by NCDs and a life-course approach to the prevention of NCDs is imperative); nor was there any acknowledgement of the rights of children and adolescents to health and life.

Fortunately, civil society groups swung into action. The NCD Alliance established a Child-Focused Working Group in January 2011, and following a period of sustained collaborative advocacy Member States ultimately agreed to include reference to children, adolescents and a life-course approach to NCDs in the 2011 Political Declaration.

This change in language has had a monumental flow-on effect in the years since, with children, adolescents and young people now an integral part of the global NCDs discourse, and increasingly included in national NCD policies and programs.

Civil society is powerful when it unites.

Just as the Child-focused Working Group of the NCD Alliance and later NCD Child rallied to drive change in 2011, so too the #IndigenousNCDs movement seeks genuine partnership with Indigenous and non-Indigenous allies alike.

Led by Indigenous peoples, civil society must come together as rapidly and effectively as possible to raise awareness of the status quo and the urgent need for change.

We must leverage every opportunity to connect and communicate. Social media plays a vital role in this process, and Twitter (@IndigenousNCDs and #IndigenousNCDs) offers a powerful platform for advocacy.

Harness the power of language and knowledge

Just as advocates for children and adolescents were dogged in the pursuit of inclusive language in the 2011 Political Declaration, so too must the #IndigenousNCDs movement be consistent and clear in messaging.

Citizens are encouraged to reach out to their own governments and call for their help in ensuring Indigenous peoples are included in the Political Declaration in September 2018.

As we advocate, we are mindful that far too many Indigenous peoples and communities around the world have never even heard the term “NCDs” much less been involved in UN dialogues, consultations or briefings.

Exclusive use of the terms “Chronic Disease” and “Chronic Conditions” for conditions such as diabetes, heart disease, respiratory diseases and cancer locks too many Indigenous peoples out of the global NCDs discourse.

We must encourage governments, multilaterals, NGOs, academics and communities to connect local Indigenous peoples to the broader NCD conversation.

There is a need to translate information on NCDs into a myriad of languages and culturally appropriate educational resources as a matter of some urgency if we are to #LeaveNoOneBehind.

Just as every UN NCDs event now rightly promotes, includes and values the voices of youth, every future UN NCDs should have Indigenous peoples attending, participating and representing their communities in a meaningful way.

In order to make this happen there are substantial financial and capacity constraints to overcome. The Australian non-government organisation CLAN (Caring & Living As Neighbours) was proud to facilitate attendance of three Indigenous peoples at the UN Civil Society Hearing on NCDs in NY on 5 July 2018, so they could share their stories.

As at August 2018, #IndigenousNCDs is not aware of a single Indigenous person planning to attend HLM3 in NY in September.

Emboldened in September 2011 by the meaningful inclusion of children and adolescents within the Political Declaration on NCDs, members of the child-focused working group of the NCD Alliance committed to ongoing advocacy action. The Australian non-government organisation CLAN (Caring and Living as Neighbours) was proud to serve as founding Secretariat of NCD Child, a global coalition with a stellar cast of founding members.*

The ongoing efforts of NCD Child, including conferences in 2012 (Oaklands, USA) and 2014 (Trinidad and Tobago) have been instrumental to the ongoing advocacy efforts of civil society, and the In 2014, the Secretariat for NCD Child moved from CLAN to the American Academy of Pediatrics (AAP), which continues to provide strong Secretariat support to this important movement.

Whatever the outcome of HLM3, the #IndigenousNCDs movement needs to learn from the efforts of NCD Child and continue to strive for change beyond September 2018.

Guided by Indigenous peoples and in partnership with non-Indigenous allies, it is hoped that the #IndigenousNCDs movement will continue to grow, connecting internationally, advocating and influencing until the inequities in the prevention and control of NCDs are redressed. This will take time, effort, resources and champions.

We must ACT NOW if we are to #LeaveNoOneBehind

HLM3 on NCDs is almost upon us. The #IndigenousNCDs movement calls on all Indigenous NCDs champions and non-Indigenous allies to come together to help make a difference. We welcome any and all offers of assistance and partnership.

Please get involved by:

If we have learned anything from the NCD Child movement, it is the profound and lived understanding that change is possible and we can make a difference when we all work together.

If Member States were willing to step up once for children and adolescents in 2011, surely they will care enough to do it again for the world’s Indigenous peoples in 201

Only time will tell…

Dr Kate Armstrong is a public health physician, and the founder & president of CLAN (Caring & Living As Neighbours), an Australian-based NGO that is committed to a rights-based, community development approach to improving health outcomes for children who are living with chronic health conditions in resource-poor settings. At the UN Interactive Hearing on NCDs in July 2018, CLAN tendered a briefing paper, Non-communicable diseases in Indigenous populations – Raising the voices of Indigenous Peoples and Communities within the global NCD discourse. Kate is a co-chair of the #IndigenousNCD movement and founding chair of NCD Child

Wrapping the tweets from a landmark event, #IndigenousClimateJustice21

PrevPreviousWhat can health promotion do about the big-picture health challenges?
NextClimate change is a health issue: where are the health professions?Next