What will it take to improve safety for remote area health professionals?

To improve the safety of remote area health professionals, the sector needs to look “outside of the box” to learn from other industries, according to Christopher Cliffe, Chief Executive Officer of CRANAplus.

Rather than simply adapting safety and security protocols of mainstream health services, the remote area sector should seek to learn from other complex work environments, he says.

Policies and procedures used in workplaces in extreme environments like Antarctica or remote oil-rigs probably have much to teach remote area health services and professionals, he says. 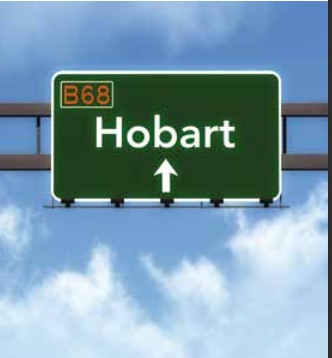 Cliffe was speaking in an interview with Croakey ahead of the 34th annual CRANAplus conference, which will be officially opened in Hobart tonight, with a Welcome to Country by Elder Aunty Brenda Hodge and an opening address by Ms Francine Douce, Tasmania’s Acting Chief Nurse & Midwifery Officer.

The murder of remote area nurse Gayle Woodford has weighed on the hearts and minds of many of the conference delegates this year, and there is expected to be strong interest in a panel discussion on Friday, “Maintaining Staff Safety in Complex and Diverse Environments”.

Cliffe said he had learnt from his own experience working overseas in the aftermath of disasters and in war zones of the benefits of safety and security procedures followed by international aid organisations.

“I worked in war zones for Red Cross International, and they have some smart systems we could learn from and adapt and apply to our industry,” he said.

These included aptitude testing as part of the recruitment process, as well as intensive training about worst-case scenarios.

“This puts safety in the front of mind so you mitigate your risks from the beginning, by being very prepared for the worst case,” he said. “A lot of it is about keeping safety at top of mind.”

Red Cross also had safety and security officers to keep an objective, higher-level overview of staff’s risk and safety profiles.

Cliffe also found mandatory debriefing processes incredibly helpful, but says he probably would not have voluntarily elected to be involved “because I didn’t think I needed it”.

“But it was mandated, and I found it very useful,” he said.

“[It’s valuable] having a psychologist remind you that what you’ve seen is not normal. You don’t want to normalise it.”

Cliffe said there were many similarities between remote area health work and international aid work, including working in isolation in resource poor environments, and dealing with multiple layers of complexity, beyond the clinical issues.

He said governments and managers needed to take greater responsibility for the safety of remote area health professionals.

“At the moment, we rely on the people out bush, the workers on the ground to manage this, whereas it needs to be systemised at a high level and into recruitment, retention and support and exit strategies,” he said.

“We’ve got to stop using up the remote workforce and burning them out and sending them back to the cities. We need to see a lot more responsibility taken from employers.”

While Gayle Woodford’s death was the impetus for this work, Cliffe said “the need has always been there”.

“[Her death] made a large part of the workforce and employers realise safety wasn’t probably being managed very well. It made us all reflect.”

Cliffe said the Safety and Security project would identify areas where extra funding would be needed to provide infrastructure and ongoing workforce support.

“The NT and some employers are doing some great work in their own workplaces and that’s part of the answer but we need some national leadership,” he said.

“The message I’d like to get across is: if we get it right, doctors and nurses and health workers can work in very extreme environments; its not the environment that burns people out, it’s the preparation and support.

“People work in very nasty war zones but, with support, don’t have to get burn out.” 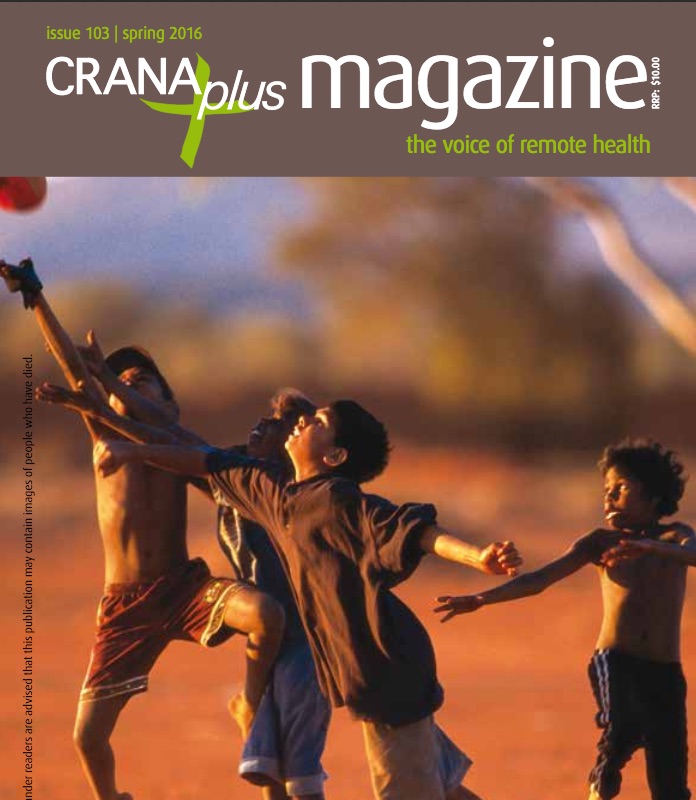 The conference will also hear from Rod Menere, who is representing CRANAplus on the National Safety and Security project. According to a report in the latest CRANAplus magazine, Menere hopes the project will reframe discussion about issues of safety and security for health professionals in remote areas.

“We need to look beyond problems and include discussion about what works. We need to empower staff to promote their own safety, and to support health services and communities to introduce and sustain safe work practices,” he said.

Menere also raised broader safety concerns, noting that about 60 per cent of workforce morbidity and mortality in remote areas results from transport and vehicle accidents.

Employers have responsibilities to take reasonable steps to ensure their employees’ safety, as well as to provide safe and secure accommodation.

However, clinicians and managers also have a responsibility to support and adhere to safety guidelines, and to work to resolve issues that increase risk.

“The tragic events of 2016 have triggered everyone into action,” he said, “but the issue of violence against health workers in remote areas is not new.”

Research from the 1990s onwards has identified significant remote area workforce safety and security issues. A 2012 Rural Doctors’ Association literature review and questionnaire project provided comprehensive documentation of the issue, and two traumatic incidents involving nurses in remote Northern Queensland had been widely reported prior to the recent murder.

“However, we need to empower RANs to decline participation in unsupported, potentially risky situations in order to promote workplace safety and reduce the incidence of assaults.

“RANs as a group can support individuals bullied/harassed in the course of pursuing reasonable actions to protect their wellbeing.”

As shown by the results of the member survey in the infographic below, bullying is an occupational health and safety issue affecting many remote area workers. 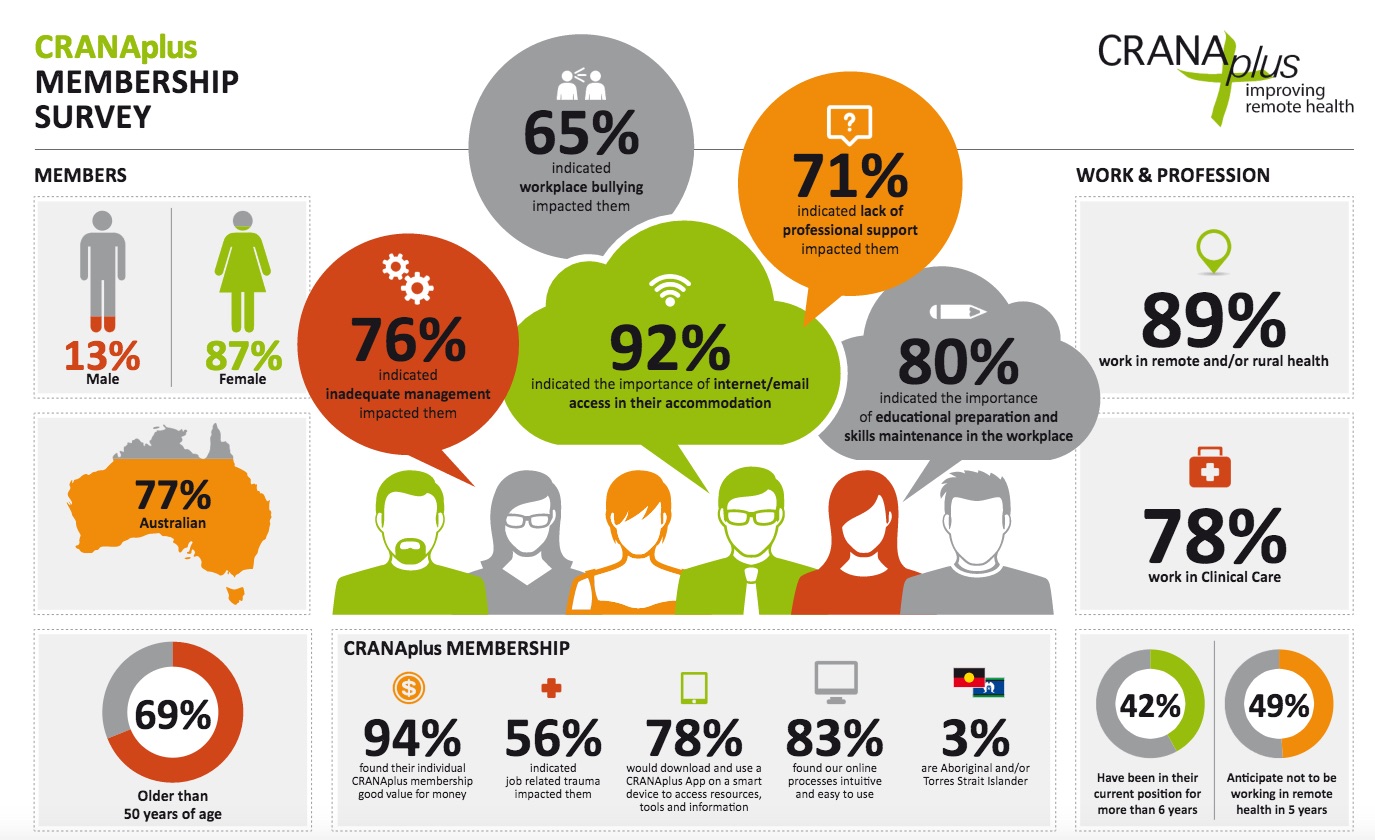 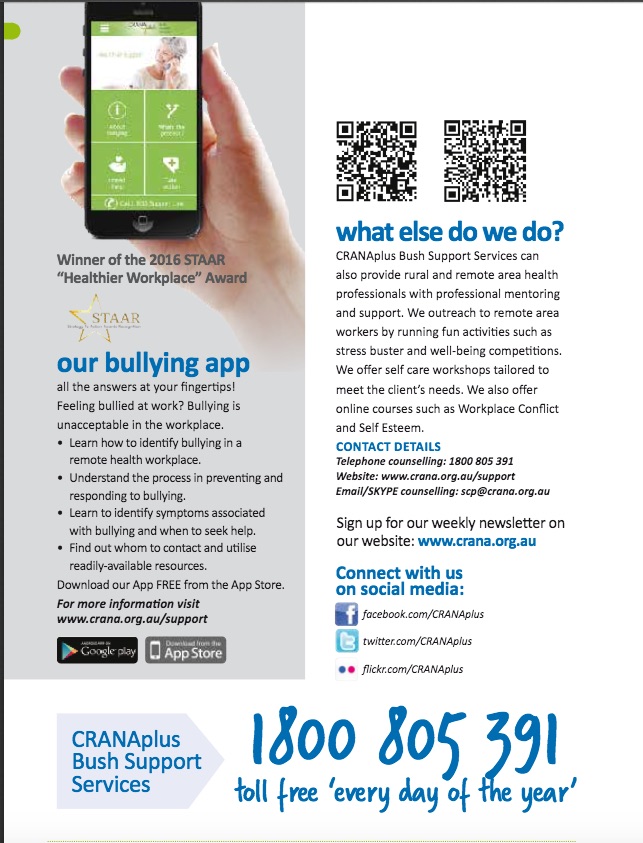