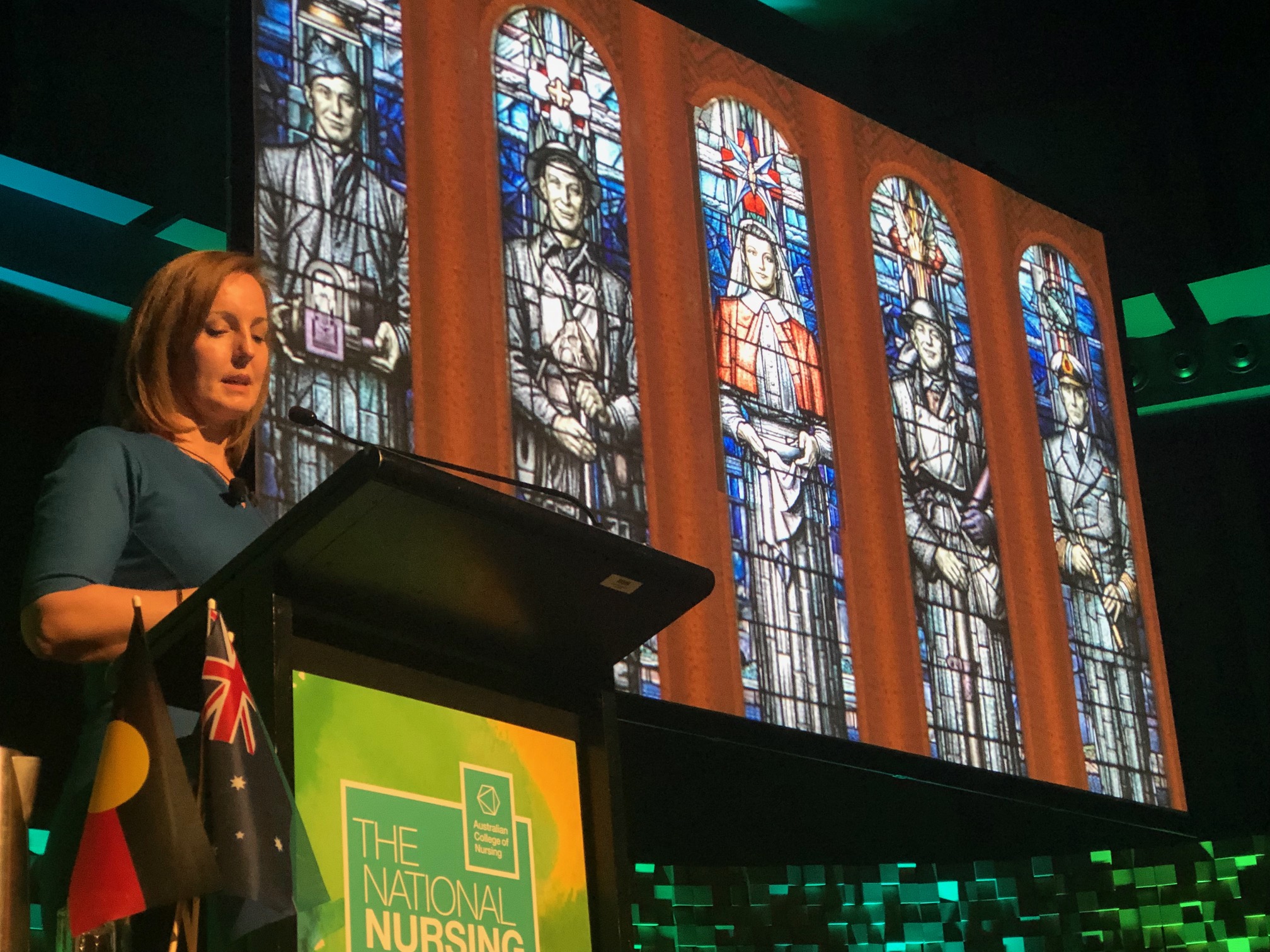 The Australian College of Nursing (ACN) has kicked off a fundraising appeal to honour the courage, dedication and sacrifice of legendary World War Two army nurse Lieutenant Colonel Vivian Bullwinkel.

The plan to erect a commemorative sculpture in the grounds of the Australian War Memorial in 2020 was announced at the recent ACN National Nursing Forum in nipaluna/Hobart.

As you can read in more detail below, Bullwinkel experienced extraordinary trauma as the sole survivor of the 1942 Bangka Island massacre off the Indonesian coast. ACN Chief Executive, Adjunct Professor Kylie Ward said:

Vivian overcame the atrocities of war with heroism, strength and tenacity. Her incredible achievements and commitment to caring for the sick and wounded are an example to all nurses and Australians alike and should not be forgotten.”

Bullwinkel’s experience was one of a number of powerful stories of “post traumatic growth” shared at #NNF2019, which was attended by more than 600 nursing leaders from across Australia.

Marie McInerney was there for the Croakey Conference News Service, and reports below. Bookmark this link for all our coverage from the event.

The packed hall of nurses was already hushed by Sharon Bown’s story of survival and trauma when the former RAAF Wing Commander turned their attention to the woman in a scarlet cape rising above the Tomb of the Unknown Soldier.

There are 15 tall stained glass panels in the heart of the Australian War Memorial, said Bown.

Each features a figure in the uniform and equipment of the First World War, and is cast to typify their quintessential qualities.

Perhaps most prominent is the panel featuring the only woman; a nurse, featured with the Red Cross as the symbol of charity, and a pelican feeding her young from the mother bird’s bleeding breast, the ancient symbol of devotion.

That nurse may no longer reflect the diversity of the profession today, Bown said, but she is an accurate depiction of the nurses who served in the world wars and is the “strong resolute foundation on which nursing is built”.

Both “gracious guardian” and “enlightened witness of war”, Bown said the nurse gazes out of the Hall of Memory, past the 1,200 names of the war dead on the Roll of Honour and down Anzac Parade towards Parliament House in Canberra.

“She reminds us every day of the true cost of service and of conflict.” 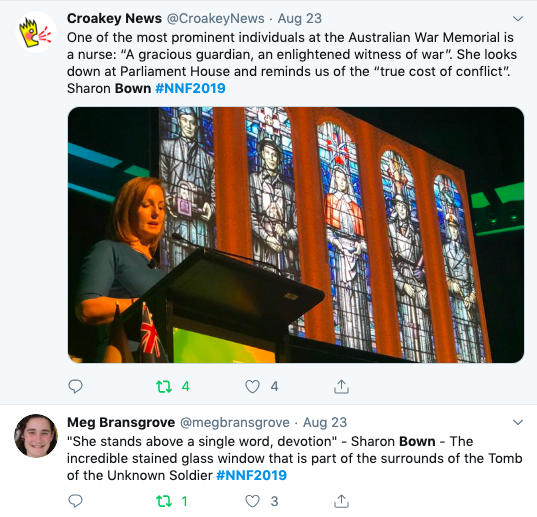 It’s a cost Bown knows well, having survived a near-fatal helicopter crash in 2004 in Timor Leste, where she was deployed as an aeromedical evacuation nurse.

She’s written graphically about the injuries and psychological scars that resulted from the accident in her autobiography, One Woman’s War and Peace.

But in front of an audience of hundreds of nurses from across Australia she also spoke of her struggle within the Australian Defence Force (ADF) to prove she was still capable of serving as a registered nurse following the crash.

It was a time in the ADF when it was “simply easier for us to administer someone’s medical discharge than it was to facilitate a rehabilitation program, to even entertain idea of keeping them within service”, said Bown.

Four years later, despite having suffered a broken back, shattered jaw and post-traumatic stress disorder, she was appointed to command a critical care team of nurses, surgeons and anaesthetists in Afghanistan.

Now retired from the ADF, Bown is renowned as an advocate for a rehabilitation program that now sees the retention of wounded, injured and ill servicemen and servicewomen like herself who “as survivors of trauma bring a unique capability to our organisation”.

As a sought-after public speaker Bown also takes her message about the power of post traumatic growth — the stories of “those incredible Australians who thrive despite the trauma” — beyond the defence community to a broader audience, including at the closing session of the three-day National Nursing Forum, which was focused on raising the profile, status and influence of nursing.

Bown welcomed news of the honour to be paid to Vivian Bullwinkel who, as Singapore was set to fall in February 1942, was with a last group of nurses, patients, women and children to make their escape on the SS Vyner Brooke.

As the Australian War Memorial tells, the next night Japanese bombers found the ship in the Bangka Strait. It was attacked and sunk. Bullwinkel drifted for hours clinging to a lifeboat before she struggled ashore on Bangka Island with other survivors.

When Japanese troops arrived, they gathered 22 nurses together and ordered them into the sea, where they were machine-gunned.

Bullwinkel, badly wounded and feigning death, was the only survivor.

Later, back on the beach, she found a wounded British soldier from another massacre. They hid out for 12 days, and she cared for him until he died.

Eventually, Bullwinkel surrendered to the Japanese and was interned with other nurses, enduring three years of hardship and brutality.

‘Is there anyone in the room who is not standing up?’

Bown told the NNF it had taken her transition out of the ADF to truly acknowledge what she had achieved in her own career on the frontline, particularly in Afghanistan where, she said, she had experienced some of her “darkest hours”.

While not all nurses will be called to war service, she urged delegates to reflect and really acknowledge the “immense capability” of their profession, which she believes is underestimated by policymakers external to the profession, but too often by nurses too.

“We have an insight into life that, by the privilege of our profession, is twofold: not only we are the carers, but as human beings we too have required care,” she said, adding that at no time had she learnt more about nursing than when she was, post-crash, a recipient of care.

Bown also urged delegates to consider the power of policy beyond the clinical realm.

She asked them to stand if they had seen the impact of climate change on health and wellbeing, not just here in Australia, but particularly for our Pacific neighbours.

“Is there anyone in the room who is not standing up?” she asked. 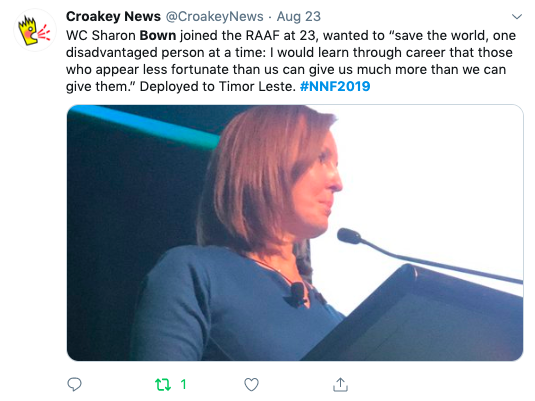 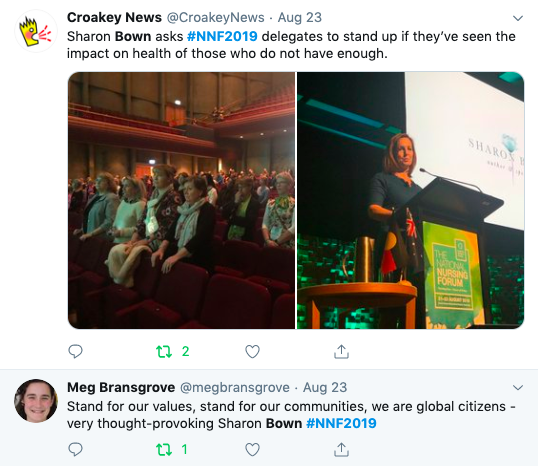 Marking the global Nursing Now campaign, the three-day National Nursing Forum explored, in depth, the power of policy and the imperative for nurses to step up and seek influence on health care policy and practice.

Bown said not all would want to be visible and outspoken, but each had the opportunity to effect change.

“The lives each of you influence through your work ripple out through families, communities and into the world,” she said.

“What will your legacy be? What ripple will you create?” 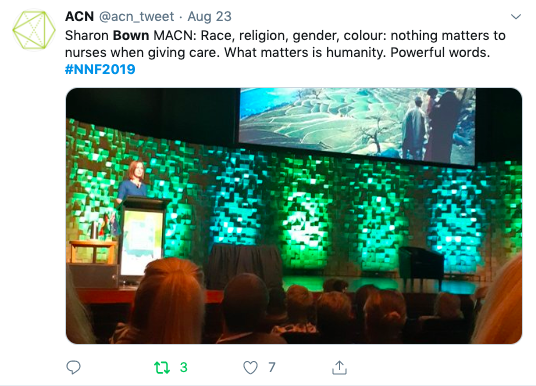 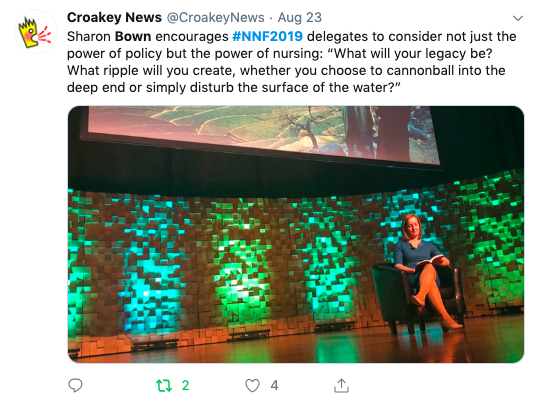 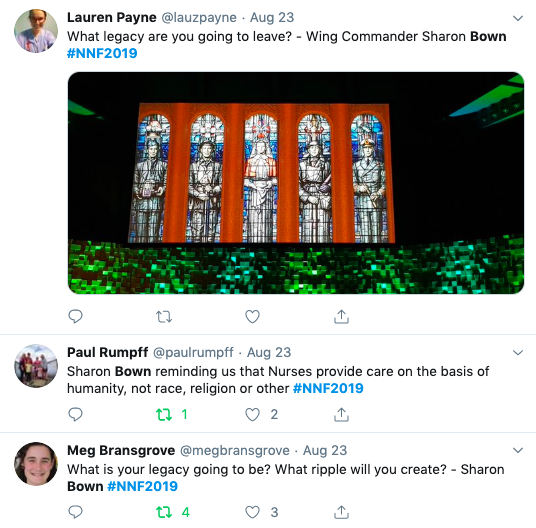 At the conference dinner the night before, NNF delegates had heard one resounding answer to such a question from Mitch McPherson, the 2017 Tasmanian Young Australian of the Year, whose mantra now is that “nothing is so bad that you can’t talk about it”.

McPherson told the heartbreaking story of the death by suicide of his younger brother Ty, a devastating loss that made him examine the signs he had missed, and his own approach to life.

“When you’re touched by suicide, you’re left with an enormous amount of emotions you’re not ready to deal with,” he told the conference dinner, describing how he entered a world of “darkness and sadness”, of “grief and guilt”.

McPherson now speaks openly about how he spent too much time focused on his own “petty worries” about work and life, instead of looking outwards, and particularly being awake to the signs that his little brother was “in a terrible time of need”.

After his brother’s death, people asked his family if they had known he was struggling. Their initial answer was “no, he was happy, fun, had everything going for him”.

But McPherson said, gradually, they began to learn more about mental health, and to realise there had been signs.

“He was struggling, he wasn’t himself,” he said. “The reality was, we were ignorant. We know now you have to look out for changes.”

Spreading that word has since become McPherson’s passion. He has run from Burnie to Hobart on the Tour De Tig — his brother’s nickname — and started up the suicide prevention charity SPEAK UP! Stay ChatTY.

He shared five practical things people could do to make a difference: 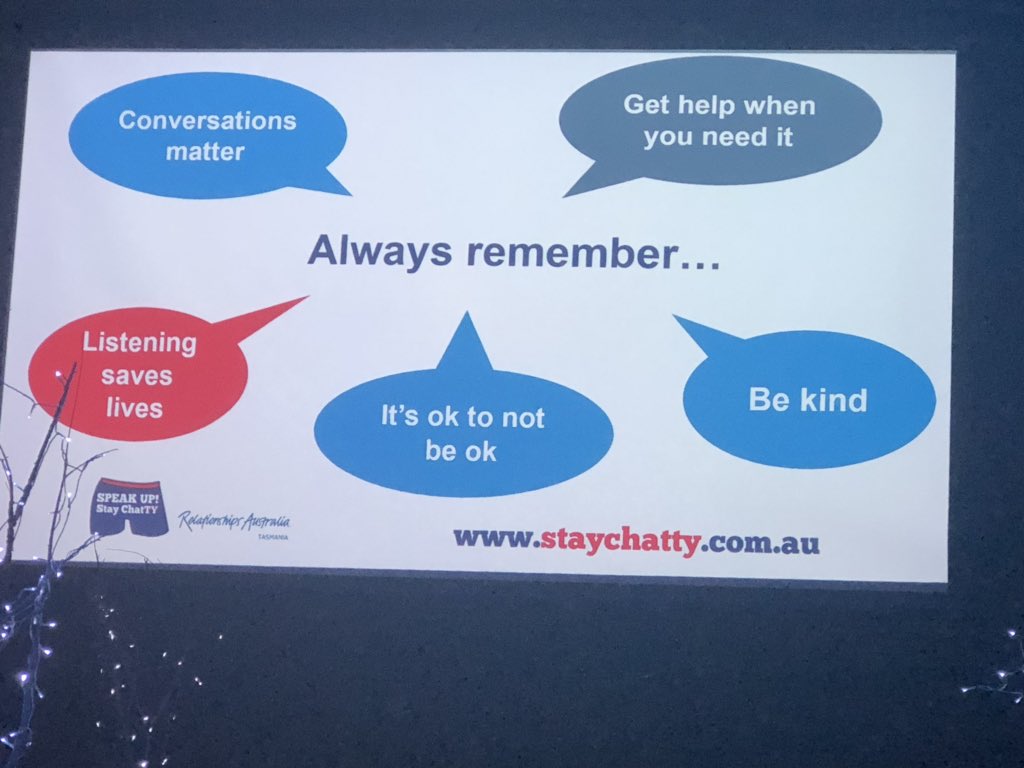 We’ve clipped some of the tweets from his address below. 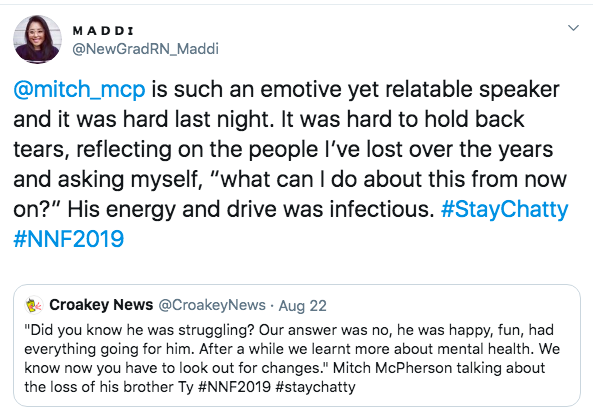 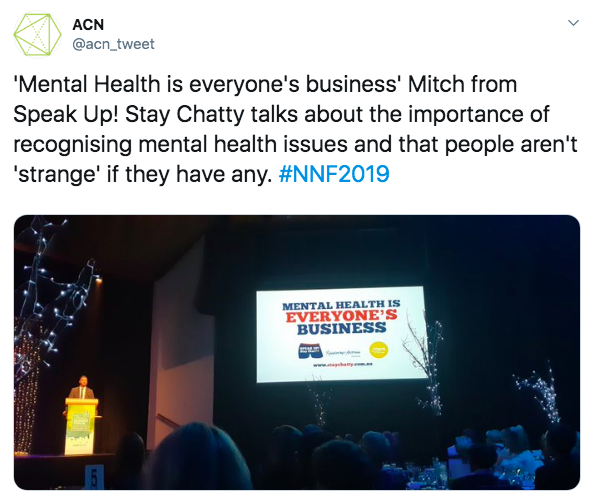 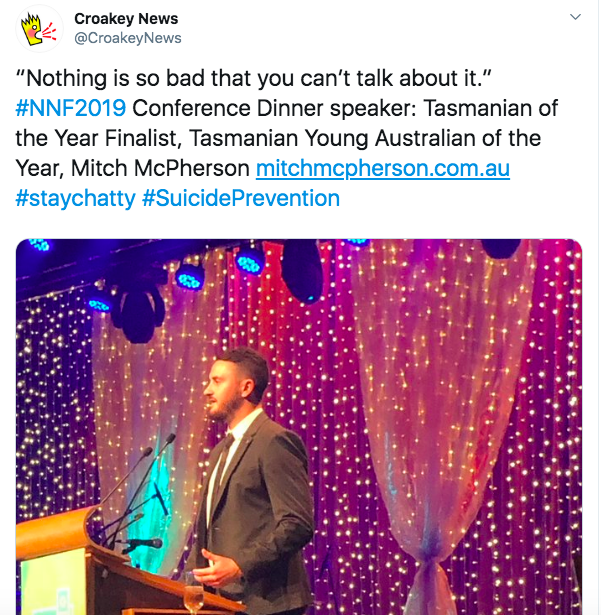 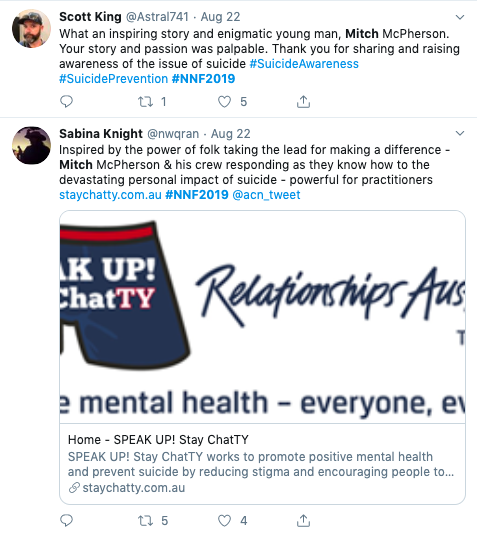 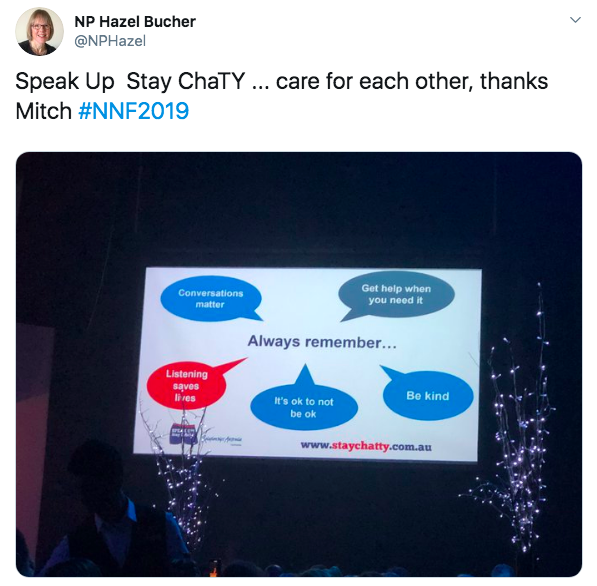 There was also an entire session on military nursing ahead of Bown’s plenary. See below for some of the tweets. 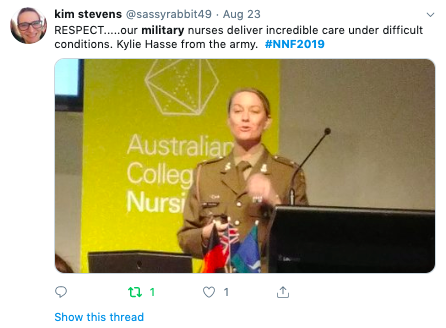 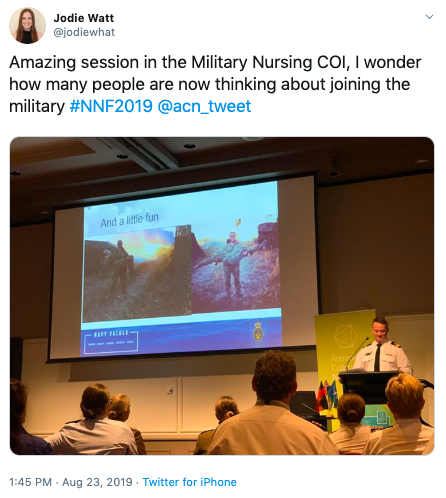 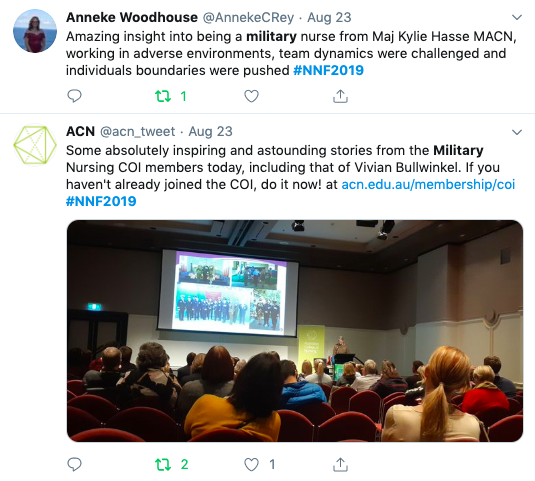 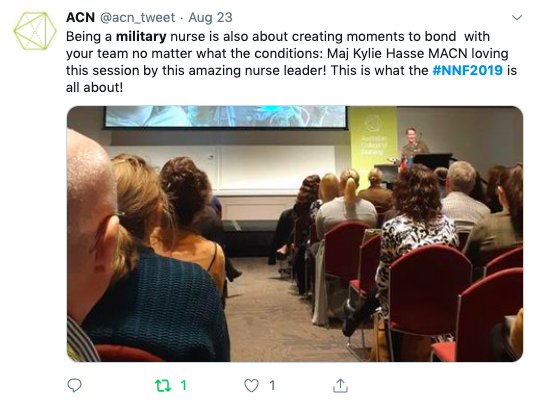 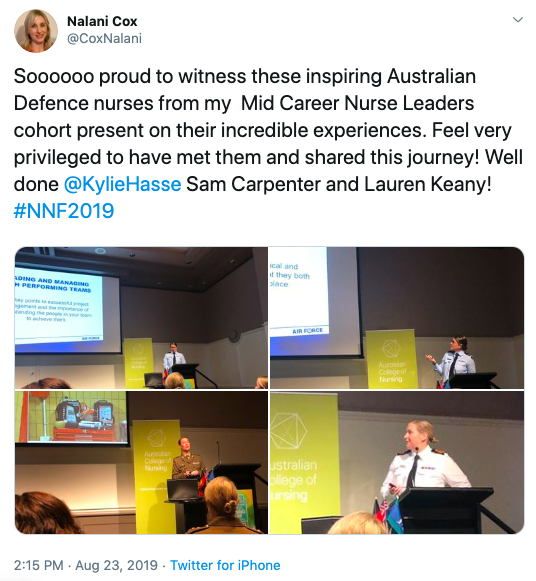 And don’t miss this Croakey interview with military nurses, Commander Wendy Thomas and Captain Amanda Garlick, and with Professor Linda Shields, who has written about the role of nurses in Nazi Germany.