The role of all sectors in preventing suicide will be under the spotlight at the National Suicide Prevention Conference in Perth next week.

Some of the challenges for researchers in evaluating suicide prevention measures are examined in the preview article below by freelance writer Matthew Giles, who will cover the event for the Croakey Conference Reporting Service.

Australia is a world leader in key suicide prevention strategies, and Australian culture is increasingly open to discussing mental health and suicide, but there is work to do on the way we assess the effectiveness of our prevention programs, according to University of Melbourne mental health researcher Professor Jane Pirkis.

“Suicide Prevention Australia is conducting an exercise at the moment where they’re looking to form a research agenda in suicide prevention,” Pirkis says.

“What I and some of my colleagues are saying is that, to date, most of the research is invested in epidemiological studies into the rates and risk factors associated with suicide, and really relatively little has been done to look at specific interventions to see what has and hasn’t worked.

“Our argument is that’s the way we need to go. The investment needs to happen there.”

The issue for researchers like Pirkis are manifold. Ethics committees are hesitant to include suicidal individuals in mental health trials, and often explicitly exclude them. There are also ethical concerns about withholding a potentially effective intervention from a persona who is suicidal, which limits the possibility of a control group.

Apart from the ethical obstacles, there are also practical ones, many of them related to the gold standard in scientific research being the randomised control trial.

“Suicide is, fortunately, relatively rare, so it’s difficult to have enough people in a study to demonstrate a reduction in suicides,” Pirkis says.

“Another thing is that some of the interventions that are available to us in suicide prevention just aren’t amenable to testing by randomised control trial.”

An example of one such intervention is the installation of barriers at suicide hotspots, like bridges and cliffs.

Pirkis will present a meta-analysis she has performed as head of the University of Melbourne’s Centre for Mental Health into the effectiveness of hotspot barriers on Thursday, day two of the conference.

“You couldn’t possibly randomise some bridges to receive the intervention and some not to,” she says.

“There’s also the tricky thing that some of the evaluation that does get done gets discounted because it doesn’t meet that (randomised control trial) gold standard. It’s more difficult for it to be published, and there’s also some more basic evaluation work that shouldn’t be published. Some of the work that has been done doesn’t yield strong enough evidence one way or the other.”

Pirkis’ most high-profile research has been in universal interventions like hot spot barriers, which are characterised by being aimed at the general population, not specific suicidal individuals.

One of her major contributions has been to the Hunter Institute for Mental Health’s Mindframe guidelines for media covering suicide.

The guidelines are based on research that shows that reports on suicide correlate with copycat suicides. Importantly, the research shows that the spikes in suicides following media reports are not followed by commensurate drop-offs, which would indicate that they are not suicides that would have happened anyway being brought forward. Instead, they are new suicides.

The guidelines emphasise not only the appropriate reporting of suicides, but the use of appropriate language when doing so. In particular, they recommend avoiding explicit details of both the means of suicide and the location, language that glorifies suicide, and language that stigmatises suicide and mental health issues. The guidelines are designed to be used by professional journalists, but also journalism students and people who may have to deal with media, like police.

Pirkis emphasises that the guidelines are not about censoring media, but rather giving them the tools to report on suicide in a way that minimises harm.

Following the death of Charlotte Dawson by suicide, broadcaster and comedian Paul Verhoeven wrote on The Vine that Australian media and Australian culture generally was hesitant to name her death a suicide and to discuss mental health and suicide.

However, Pirkis’ research has found that following the release of the Mindframe guidelines there has been an increase in both the quality of suicide reporting and the total number of reports on suicide.

“In my experience, journalists are fantastic, and they really want to do the right thing,” she says.

“They certainly don’t want to cause harm, and they take their role in educating the public seriously, so perhaps having some guidelines on how to report on suicide in a way that is appropriate and less likely to cause harm meant that there was more likely to be reporting happening.”

Although many countries worldwide have similar guidelines, Australia’s strength has been in implementing them. Pirkis credits the Hunter Institute with involving journalists in the development and dissemination of the guidelines in such a way that, she speculates, gives them a sense of ownership over the guidelines.

“The Hunter Institute has done a fantastic job of briefing journalists, going to individual newspapers and radio stations and television stations and getting the intent of the guidelines embedded in journalist school curricula, helping convert the guidelines into specific codes of practice for professional organisations and that sort of thing,” Pirkis says.

“I think it’s just been a much bigger enterprise, more strategic, well-thought out and collaborative (in Australia) than in other countries. Australia is regarded as a bit of a leader in the area.”

On day one of the conference, Pirkis will chair a plenary panel on suicide and the economy, featuring former leader of the Liberal party Dr John Hewson, Indigenous health and education researcher from the University of Wollongong Professor Ngiare Brown, and mining chairman and Murdoch University chancellor David Flanagan. (Perhaps there will be discussion of some of the concerns recently raised by John Mendoza about the Federal Budget’s impact upon young people).

That panel, alongside a plenary panel the following day discussing the social determinants of suicide, emphasises the sometimes neglected fact that suicide is not purely a mental health problem.

Although mental health is a major factor in suicide, other factors are environmental and contextual, such as social isolation and unemployment. The multifactorial nature of suicide means that interventions that work across the board, such as those that Pirkis has researched, are especially valuable.

“There is a whole range of factors have been associated with suicide that the health system couldn’t be expected to influence,” Pirkis says.

“That’s why the intent behind Australia’s national strategy and strategies elsewhere is to involve a government approach and a community approach. Getting other sectors involved, like the employment sector, is seen to be important.”

The Mindframe Guidelines for Journalists 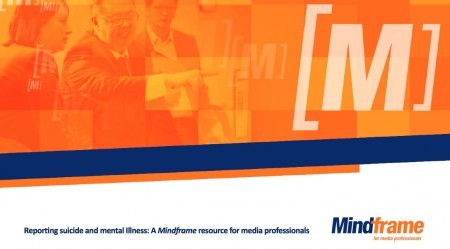 Decide whether to report the suicide. Determine that suicide has been determined as the cause of death. Obtain consent before identifying the person who has died, where possible. Assess whether the story is clearly in the public interest. Consider how many suicides have been reported recently.

Reduce the prominence of the story. Suicidal people can seek out stories about suicide, and prominent suicide stories can increase their risk. Locating reports on suicide off the front page and down the order of stories, as well avoiding using the word “suicide” in headlines and key search terms can reduce prominence.

Modify or remove information that may increase risk. The effect of such information can be to glorify the death and decontextualise the death in misleading ways. Risky information can include details from suicide notes, promotion of public memorials, and details of the method and location of the death. Use general images of the deceased, rather than images of funerals or grieving families.

Take care when interviewing family and friends of the deceased. Grieving individuals may be at risk of suicide themselves, and they may have reduced capacity to consent to interviews.

Take care not to glamorise the death by suicide of celebrities.

Place the story in proper context. Take care not to imply that the suicide was spontaneous or preceded by a significant event, as research suggests that most people who die by suicide have underlying risk factors. Seek the views of suicide prevention experts who can give context and explain data.

Use appropriate language. Avoid language that presents suicide as a desired outcome, associates suicide with crimes or sins, glamorises a suicide attempt, sensationalises suicide, or is a gratuitous use of the term “suicide” out of context.

Promote help-seeking. Include the details of at least two 24-hour helplines. Match the helpline to the story.

• Matthew Giles is a freelance writer in Perth and a PhD student in creative media at RMIT University.

• ABC radio interview with Sue Murray, the chief executive of Suicide Prevention Australia, on the need for a national strategy for suicide prevention that incorporates the knowledge of those with the lived experience of suicide.