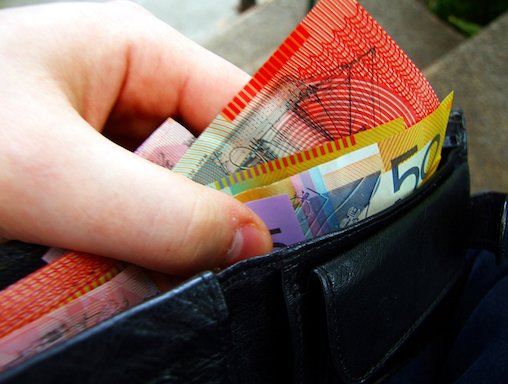 By Martin Kingsley from Melbourne, Australia - Cashmoney, CC BY 2.0, https://commons.wikimedia.org/w/index.php?curid=3332841

What would you do with 7 Billion Health dollars?

In a previous post at Croakey, Australian Healthcare Reform Alliance (AHCRA) Chair and Croakey Editor, Jennifer Doggett, reported on the growing disquiet from some health and consumer groups about the value of Government spending on the Private Health Insurance (PHI) rebate.

She flagged that, in the lead-up to the 2017/18 Federal Budget, AHCRA would be presenting different options for re-directing funding from the PHI rebate to other areas of health spending.

A case for re-purposing

A statement released today from AHCRA said the PHI rebate cost the community around $7 billion per year in direct subsidies, with “no evidence that it delivers any benefits to the public health system.”

This was in an environment of inequitable healthcare access for some groups, and some challenges such as an ageing population and high rates of chronic disease on the horizon.

The statement said fairness was further tested by the fact that many Australians on lower incomes do not benefit from the rebate because they cannot afford private health insurance or the additional expenses incurred when using the private healthcare system.

“International evidence demonstrates that there is a strong and direct correlation between countries’ reliance on PHI to fund health care and the total cost of health care. If we want Australia to have a fair and efficient health system, we need to reduce our reliance on PHI in the future.” the statement said.

Exploring the options for #7billionhealthbucks

The full statement, which includes a call for the Government to act in this Budget to stop PHI from draining tax revenue away from the public health system. is available here.

Croakey will update this post with the AHCRA’s “7 billion dollar options” as they come through. In the meantime, feel free to add your ideas here, or tweet them to @CroakeyNews.

In the first of seven planned instalments on how to spent the $7 billion redirected from PHI rebate, the ACHRA pointed to Primary Care.

They said re-directing funding into primary health care would increase the overall efficiency and equity of the health system and benefit 100% of Australians, not just those with private health insurance.

They suggested the funding could be used to:

“AHCHA supports the overall aims of this trial… However, the $120 million allocated to this program is inadequate to support effective coordination and management of patient care, especially as it is simply a reallocation of the funds GPs already receive. Additional funding of $80 million would ensure this pilot program has a genuine chance of delivering improved outcomes and reducing hospital stays for a high risk patient group.”

The full statement can be read here. Stay tuned for further suggestions on how to spend #7billionhealthbucks over the coming days.

AHCRA chair, Jennifer Doggett said in a statement today that Preventive health  is “the most cost-effective use of our health dollars”, keeping people well and out of hospital.

The statement cited Australia’s “proud and world-leading record of successful preventive health campaigns”, but said there were funding gaps, such as for targeting obesity, injury prevention, mental health and domestic violence.

AHCRA suggested an increase in the level of Federal funding for prevention from 1.5% to 5% of the health budget, which would increase health spending in this area by around $5 billion per year – less than the amount currently allocated to the PHI rebate.

The full statement emphasised obesity and nutrition as particular areas for attention.

He said those eligible for treatment in the public system often faced long waits, which exacerbated their dental and other chronic health problems, and that poor access compounded and entrenched disadvantage.

“87% of dental care in Australia is provided in the private sector and dentistry in general operates within an outdated bio-medical model of care which is inflexible, insufficiently engages patients as partners and is too disease and treatment oriented.”

“Re-directing the $7 billion currently going to the PHI industry into a major strengthening of public dental services and the re-orienting of private dental services would markedly improve the equity and efficiency of the whole dental care system and promote health and wellbeing generally,” Dr Simmons said.

We’ve posted an article on the need to increase funding for Mental Health from Dr Sebastian Rosenberg, AHCRA Spokesperson on Mental Health, here.

“The insurance rebate is a waste. We could do so much more in health care with this money. In mental health it would practically double the amount of funding we could use, finally building the community mental health sector we need to support GPs and avoid unnecessary hospitalisation.” 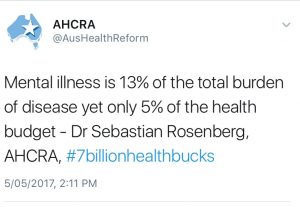 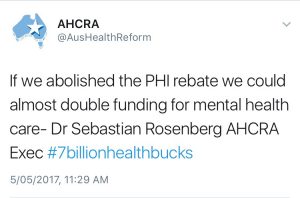 Increasing access to medical specialists in the public system, and improving fee transparency in the private sector is the focus of a statement released today by AHCRA.

The statement said many Australians currently experience barriers to accessing specialists “due to cost, geography and a lack of understanding of their rights.”

AHCRA Chair, Jennifer Doggett said is was vital to increase the number of salaried specialists rather than simply putting more money into the private fee-for-service, system, to ensure the needs of the most disadvantaged Australians are addressed.

“These three initiatives could all be funded by re-directing around $2 billion of the $7 billion currently being used to fund private health insurance rebates. AHCRA calls on the Government to use the upcoming Budget to increase access to specialist services and support consumers to make informed choices about their care,” Ms Doggett said.

The full statement can be read here.

On the eve of the federal Budget, AHCRA has called on the Government to re-direct funding from the $7 billion PHI rebate, to improve the health and well-being of Aboriginal and Torres Strait Islander Peoples.

ACHRA Chair, Jennifer Doggett said that, despite having significantly poorer health and reduced life expectancy compared with the non-Indigenous population, Indigenous Australians did not benefit equally from the $7 billion PHI rebate as they were less likely to be PHI members.

She said the $7 billion should be used to support “a comprehensive population-wide approach that incorporates the social determinants of health and empowers people to take control of their own lives and improve their health through culturally appropriate mechanisms.”

Community- controlled health services were central to efforts to close the health and life expectancy gap, she said, and these services, along with their representative body NACCHO, required more consistent and assured long-term funding.

AHCRA suggested that funding be allocated to achieve the following:

The full statement can be found here.

PrevPreviousPopulism, politics and global public health
NextThe future is fast approaching, but are we ready? A LongRead on what AI might hold for rural healthNext