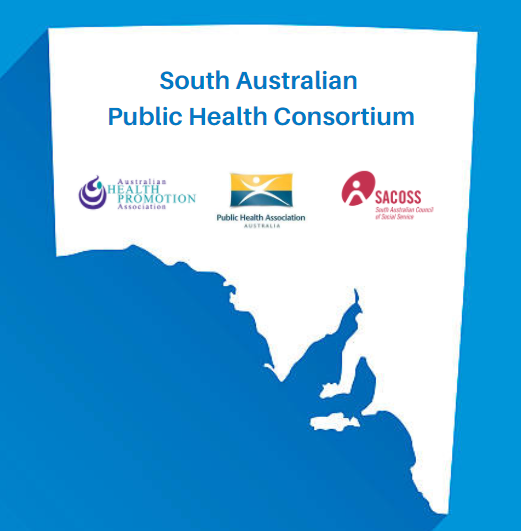 What’s on the health agenda for the South Australian election?

Introduction by Croakey: With South Australians headed to the polls on 19 March, the South Australian Public Health Consortium has identified key health priorities, which they shared during a recent week of tweeting for @WePublicHealth. 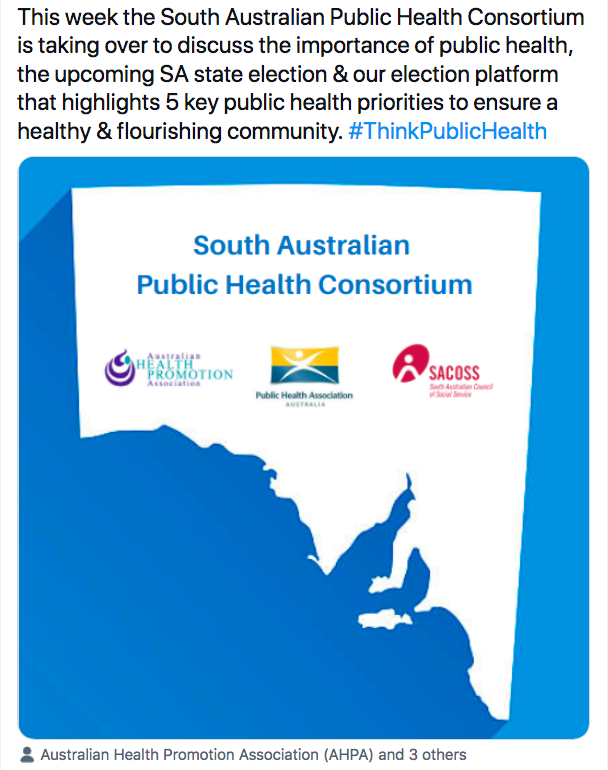 The Consortium partners are a group of leading public health expert organisations that are committed to promoting the importance of public health, health promotion and prevention in South Australia (SA).

Last year, the Consortium released their election platform for the 2022 State Election. The platform acknowledges the recent focus on COVID-19, but encourages the SA Parliament to look beyond the pandemic to #ThinkPublicHealth more broadly. 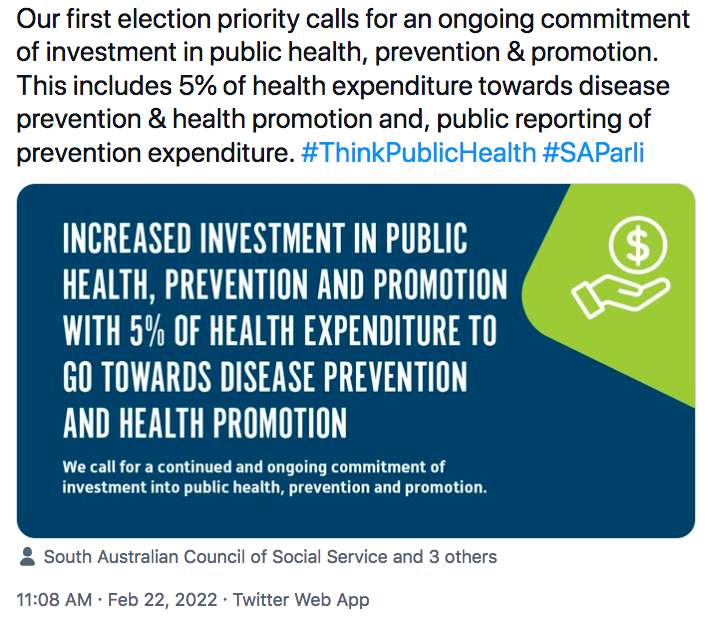 Why is this needed? Evidence has demonstrated the cost-effectiveness of interventions to prevent illness which then generate flow-on benefits, for example, to reduce burden on healthcare. Estimates suggest every dollar spent on health promotion can save five dollars on health spending.

Wellbeing SA highlighted in their recent strategic plan a commitment to reprioritise the system to focus on prevention in SA. However, their reports estimated health expenditure in 2017-18 equated to approximately $2500 per person, but only $58 went towards public health and/or prevention.

A minimum investment of at least five percent spent on public health prevention is considered best practice and in line with countries such as Canada, Aotearoa/New Zealand and the United Kingdom. We are asking for a commitment from our MPs going into the next election to prioritise prevention, beyond the COVID-19 pandemic. 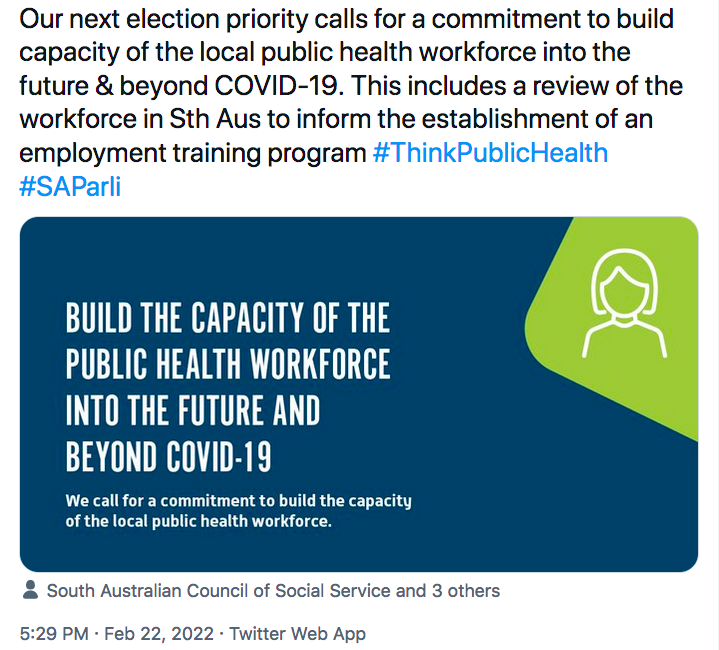 To achieve a coordinated prevention system and ensure positive health outcomes, we need an adequately trained, skilled and supported public health workforce. COVID-19 has given us an example of a public health challenge where our workforce is crucial, but are we ready for the next?

This article by PHAA CEO Adjunct Professor Terry Slevin calls for an increased investment in public health workforce training and development to help address the current pandemic and beyond.

The establishment of a specialised government training program in SA will improve the capacity and skills of the preventive workforce. There is also a need to focus attention on the Aboriginal public health workforce to ensure healthcare initiatives are culturally safe.

An example of where this works well is the @AHPA_AU and @HealthwayWA scholarship program in Western Australia that has been running for 20 years and has trained more than 100 practitioners. See more details on the website: http://healthpromotionscholarshipswa.org.au 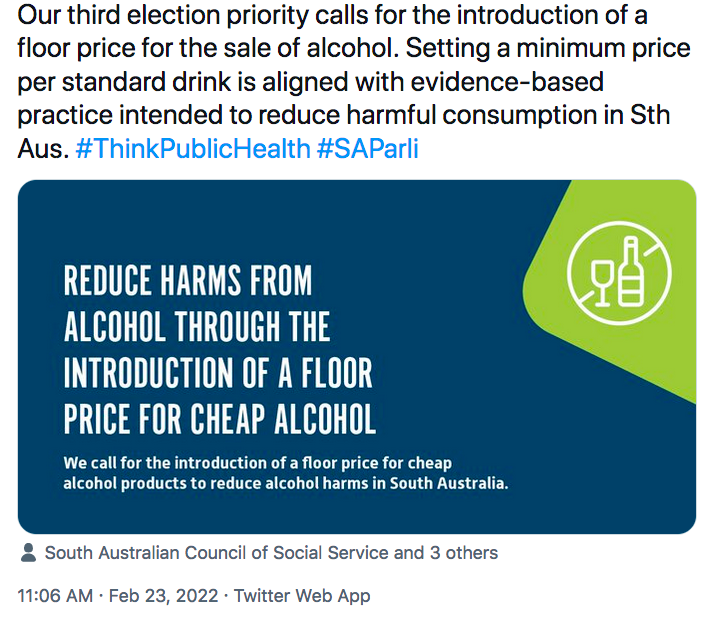 Why is this needed? Many South Australians drink at risky levels. The more that our citizens drink in excess of health guidelines, the higher the harms to our community. In SA, alcohol is being promoted and sold at dangerously low prices; as low as $0.33 per standard drink.

Put simply, increased alcohol prices = decreased alcohol use and related harm. This approach has proven effective both here in Australia and internationally, showing that a floor price saves lives, and reduces hospital admissions and crime.

For instance, since a floor price was introduced in the Northern Territory in 2018, there has been a reduction in alcohol-related harms. Read more here.

We call on the South Australian Government to put the health of the community ahead of alcohol industry through regulation of liquor retailers. In the NT, a floor price in mandated as a condition of holding a liquor licence. The same legislation is possible in South Australia. 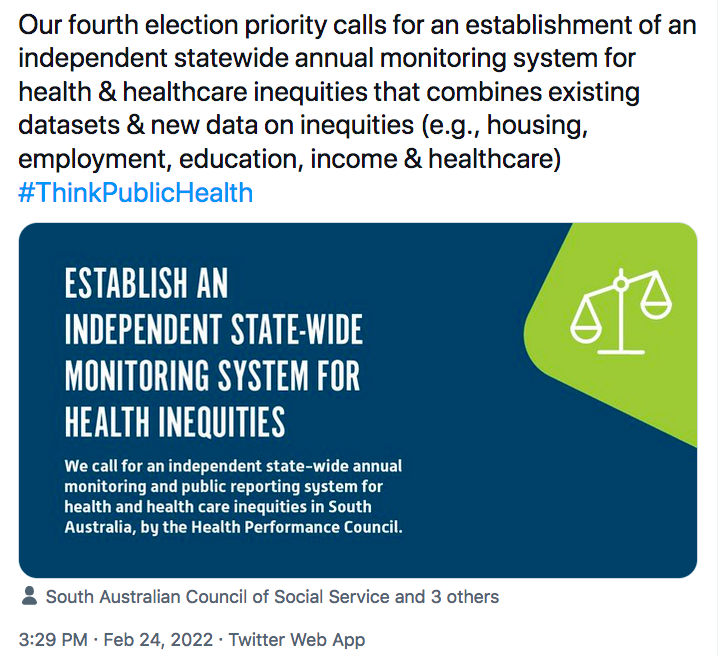 Gaps in health inequities are widening in SA. Without the ability to monitor this comprehensively, we cannot determine which supports are most effective in closing this gap and promoting equity.

An effective system is one that provides data in an accessible form (for example, an online portal) to all sectors of government, non-government and the public. This would provide an evidence base to inform interventions and track progress over time.

The establishment of a monitoring system, led by an independent body such as the Health Performance Council, will help inform the development of strategies to reduce inequities.

Importantly, this system would help identify subgroups within the population that are currently under-served by health services and have higher rates of morbidity and mortality. Equity-based interventions are crucial to ensure all South Australians are provided the support they need. 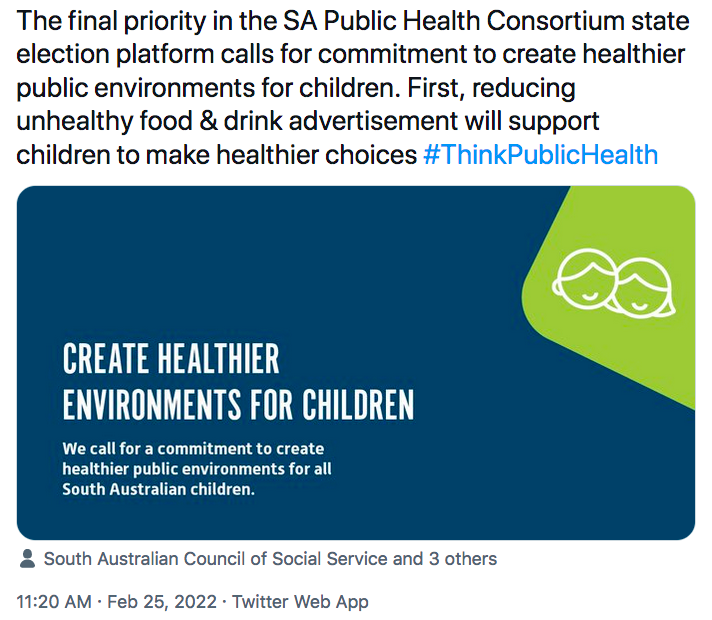 Exposure to unhealthy advertising is directly linked to increased energy consumption. Alarming research by Telethon Kids shows that 74 percent of outdoor food ads close to schools were for unhealthy foods, and schools in poorer areas had a greater percentage of unhealthy food and alcohol ads.

We call for the phasing out of all advertising of unhealthy food and drinks on government-owned property by 2025. Similar policies have been implemented in other Australian states without negative impact on government revenue.

Physical environments shape children’s food-related behaviours. We call for this shift in policy to help ensure public environments in SA are best supporting our kids to grow up healthy, make healthy choices, and have healthy outcomes. 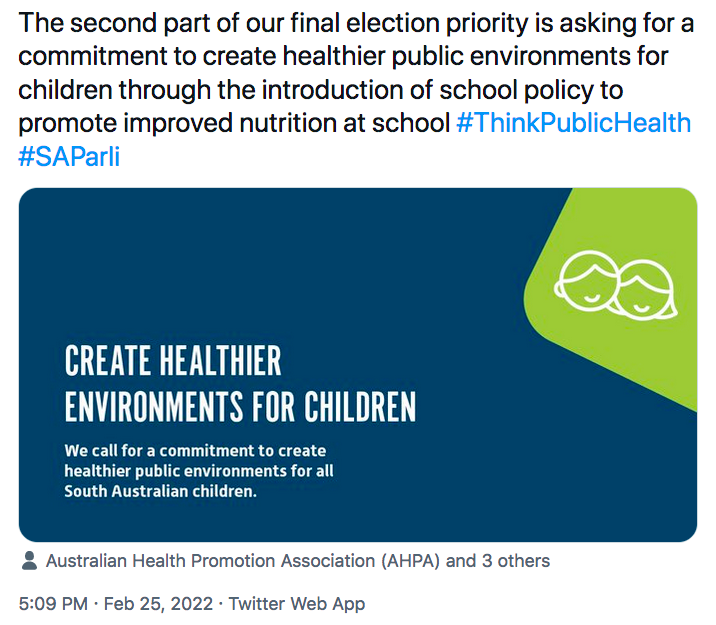 Schools, through their contact with children outside the home, provide a promising avenue to support healthy behaviours. Research shows school food provides 37 percent of children’s daily energy intake and 44 percent of energy consumed is from foods high in energy, saturated fat and added sugars.

The 2008 Right Bite Healthy Food and Drink Supply Strategy provides nutrition criteria (green, amber, red) for SA schools. However, guidelines are not mandated and do not include recommended percentage of healthy “green” foods. As a result, “amber” options dominate school menus.

Having more ‘green’ options on school menus encourages their consumption. We call for revision of the Right Bite Healthy Food & Drink Supply Strategy to incorporate a mandated minimum of 60 percent green category foods and no RED foods or drinks on school menus.

This will bring SA policy in line with that in other Australian jurisdictions. Other elements of successful school food supply strategies will need to be considered during a gradual implementation phase e.g. equity of resources to schools in disadvantaged areas and canteen staff training. 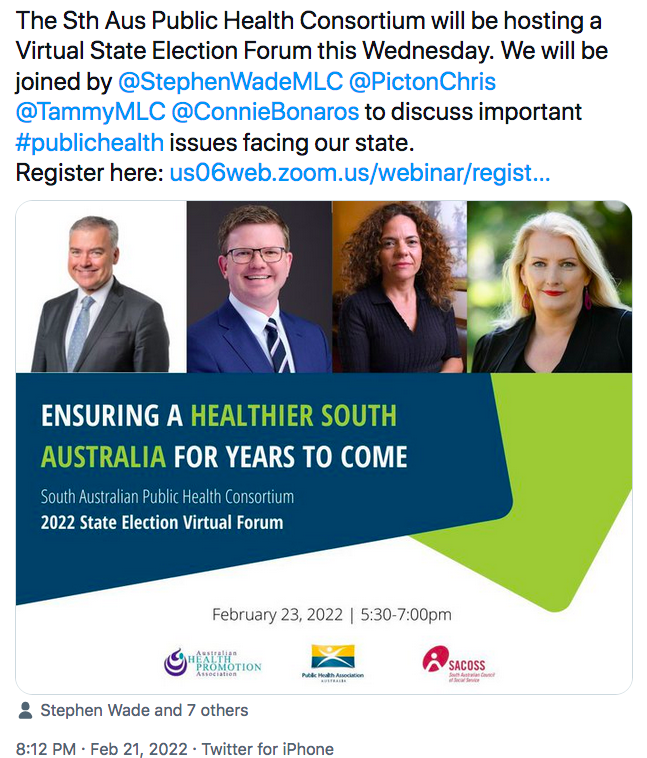 A report from the Election Forum event is published here.

Mary Brushe is a PhD Candidate in public health at the University of Adelaide and a researcher at Telethon Kids. She is also the advocacy co-ordinator for the PHAA South Australia Branch.