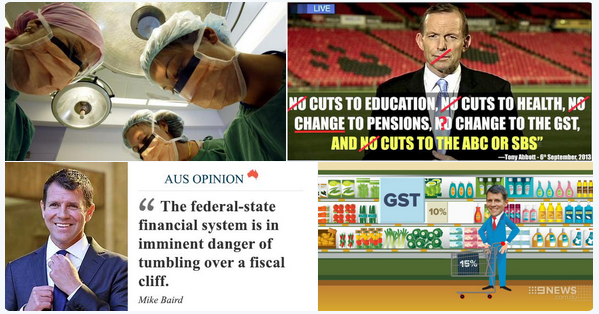 Momentum has been growing ahead of today’s meeting of State Premiers and Prime Minister Tony Abbott for increasing the goods and services tax from 10 per cent to 15 per cent, in large part to cover health care funding gaps.

Emeritus Professor Stephen Leeder from the Menzies Centre for Health Policy at University of Sydney outlines how and why we have come to this in the article below, republished from The Conversation.

The Consumers Health Forum also says that talk of expanding the GST to meet rising health costs is “like prescribing the medicine before completing the diagnosis”. See the media release  or read it in full at the bottom of this post.

Remind me again, what’s the problem with hospital funding?

State and territory leaders will meet in Sydney today to nut out solutions to health and education funding gaps. New South Wales Premier Mike Baird will again call for the GST to increase to 15%, while Victorian Premier Daniel Andrews will recommend increasing the Medicare levy to cover the shortfall.

Treasurer Joe Hockey is expected to propose the states take full responsibility for funding public hospitals if the GST does indeed rise.

But what exactly is the problem the leaders are trying to address? And how did we get into this mess?

First, let’s go back to last year’s budget, when the issue came to a head. As health economist Stephen Duckett neatly summarised on The Conversation,

The 2014-15 budget took an axe to Commonwealth payments to the states for health care. It abruptly terminated grants to states under the ironically named National Partnership Agreements, and, from 2017, sliced more than $1 billion a year from public hospital grants through reduced indexation. 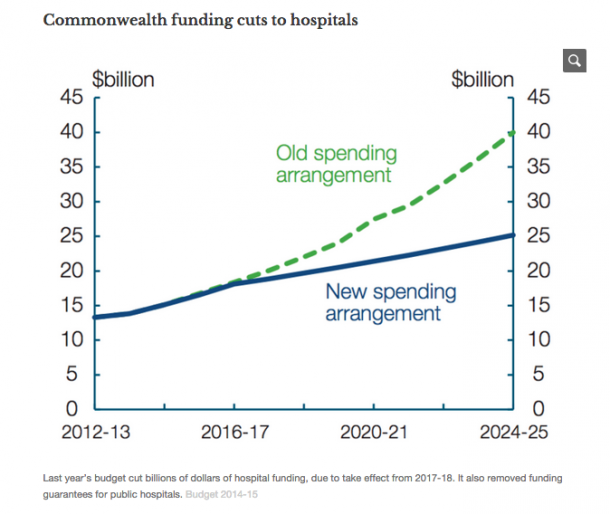 So, the Abbott government modified the agreements the Rudd-Gillard government transacted with the states and territories to assist with funding growth.

Australia spent about A$140 billion on health care in 2011-2012. That’s about A$6,000 per person each year. Hospital care accounted for nearly 40% (A$53 billion) and medical care in the community cost nearly A$10 billion. Medications cost almost A$19 billion.

The reason hospital costs are of outstanding importance to the states is that, unlike general practice and medications, they pay for them. Of the A$53.5 billion hospital services (both public and private) received in 2011-12, the state and territory governments paid 42.8%, while the Commonwealth contributed 36.5%. Non-government sources provided the remaining 20.7%.

And the cost of funding hospitals is rising, as you can see by this chart. 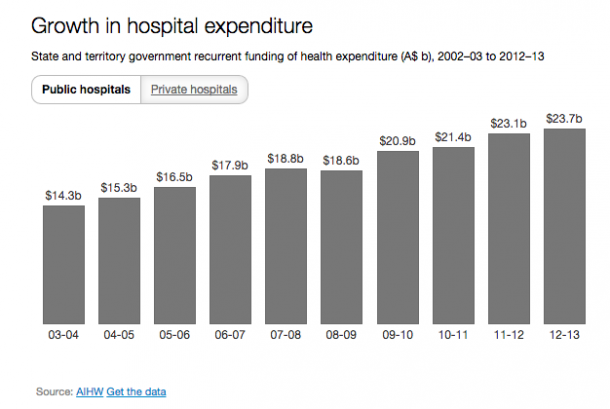 State contributions for all health care rose from 23.2% to 27.3% from 2001-2002 to 2011-2012, while Commonwealth contributions fell from 44.0% to 42.4%. It is a continuation of this trend of less Commonwealth/more state and territory contributions – and the risk that hospitals will swallow more of the state budgets – that irks the premiers. 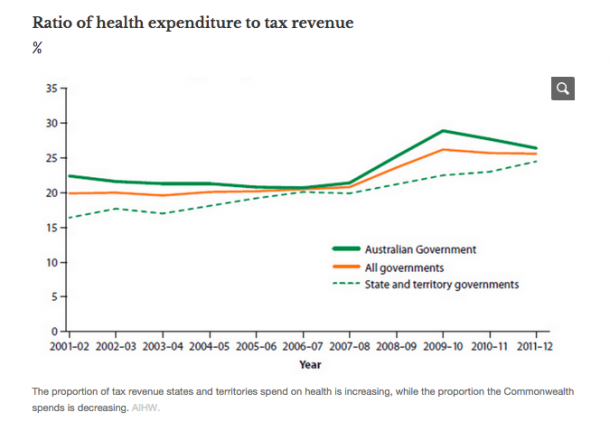 Premiers are also concerned about the trajectory of growth: Australian Institute of Health and Welfare modelling from 2008 projected that annual hospital expenditure would more than double from 2012-13 to 2032-22, from A$36 to A$81 billion.

Why are health costs rising?

When considering rising health-care costs, it’s important to note that dollars spent may simply reflect growing prosperity. With more money to spend it is hardly surprising that we devote more to health care. Indeed, health care is a “superior” good, meaning there is no natural upper limit to our investment, as there may be for “normal” goods such as food.

As the Australian Institute of Health and Welfare explains:

So the proportion of our expenditure on health may rise as our aspirations grow, partly driven by an awareness of what new technology can do to ease and prolong our lives. This has been the pattern for years within OECD countries.

But this doesn’t remove the difficulty the states and territories face in raising revenue to meet the demand of rising expectations from an expanding and ageing population and reduced contributions from the Commonwealth.

The problem is probably not as dire as it has been portrayed, but we may as a nation choose to cut our cloth differently. If we wish to increase the state and territory contribution to hospital costs, states and territories will need to generate the necessary revenue. This is where the debate moves into the territory of changes to the taxation system and the agenda of today’s leaders’ summit.

Talk of expanding the GST to meet rising health costs is like prescribing the medicine before completing the diagnosis, the Consumers Health Forum says.

“Tax is only part of the national debate we should be having about health,” says CHF Chief Executive Officer, Leanne Wells. “There’s no doubt we must fix the widening funding gap in health. What’s more compelling is the case for health reform itself and the role this can play in stemming costs.

“We need to have a look at the fundamentals of our system and design new health care arrangements that deliver better value, less waste and less duplication.

“We need different not more of the same. Australia should be looking at how we can make our health system more cost effective and efficient before introducing a new tax specifically to meet health cost escalation,” Ms Wells says.

“This is not an either/or debate. Decisions about changes to Commonwealth-state roles in health need to be based on what will deliver a better working system and one that is structured to meet emerging challenges such as the growth in complex chronic disease, rather than making funding the first priority.

“Form follows function: an integrated system that delivers appropriate, quality care to all is what we want for consumers. The question of how and at what level we should fund it is the next question.

“A cooperative federalism approach which removes the current state-federal divisions that impair our health system is a necessity. To shift further resources to one level of government would be likely to aggravate the cost-shifting and other perennial problems with the state-federal divide.

“At the moment we are seeing our universal health system drifting towards a two-tiered regime where uninsured patients miss out on care and even insured people struggle to meet the costs of routine surgery.

The years of above-inflation increases in health costs will not be fixed by a broader GST without a broader discussion about what kind of system we want for the future.

“We need health policy that gears our system towards early intervention, stronger, responsive primary health care and less reliance on care on hospital and specialist settings.

“Medicare has provided a strong foundation for an equitable health system. We need to heed this and make the best of current knowledge about models that work to introduce integrated services that provide team-based care by doctors, nurses and allied practitioners working in the community and reduce the need for costly hospitalisations.

“We are encouraged by the early steps taken by the Health Minister to initiate reviews of primary health care and Medicare benefits to explore ways the system can deliver better value.

“One of the shadows over current health policy is the assumption that health costs are bound to increase endlessly for the foreseeable future. History should tell us that need not be the case. As in the case of pharmaceutical development and the expiry of patents, medicine costs can come down,” Ms Wells said

PrevPreviousIs Victoria up to tackling the big public health issues?
NextPrivate health & private hospitals: how does the new landscape look for patients & equity?Next