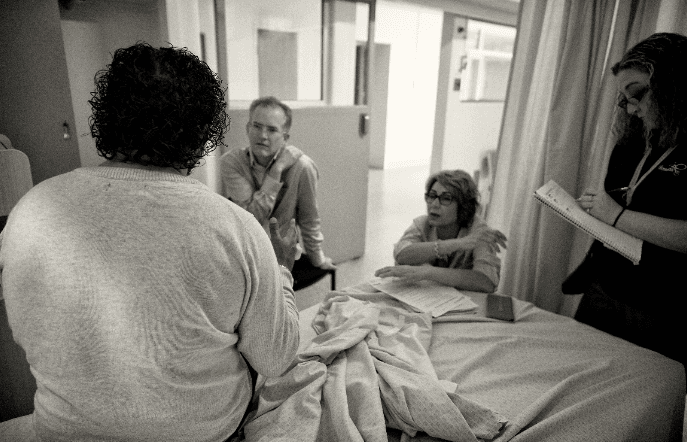 Image from: Royal Perth Hospital Homeless Team - A report on the first 18 months of operation.

When hospitals strive to address homelessness, good things can happen

The creation of a specialist Homeless Team at the Royal Perth Hospital is bringing dramatic changes to the health and wellbeing of homeless people who have traditionally been part of a “crisis carousel” in the health system, particularly in hospital emergency departments.

A national summit called by the Australasian College for Emergency Medicine (ACEM) heard this week that the Homeless Team’s work not only leads directly to big reductions in emergency department presentations, but also addresses some harsh or misguided attitudes towards homeless people among “frustrated” hospital staff.

The ACEM Mental Health in the Emergency Department summit, attended by more than 170 emergency doctors, psychiatrists, consumers, clinicians, policy makers and researchers, also heard of other efforts to address the social determinants that force many vulnerable people into emergency departments.

Research shows that homeless people make up among the most frequent presentations, unplanned admissions, and longer lengths of stay in Australia’s emergency departments. Yet, said Dr Amanda Stafford, Clinical Lead of the Royal Perth Hospital Homeless Team, they often miss out on critical mental health assessment or review in hospitals because they are “passed off as being a social problem rather than a mental health problem”.

Many marginalised people work out that if they present first with a mental health problem they will simply be pushed away, so they will often present with an illness or injury.

But underlying their presentation will always be aspects of mental health, either straight out psychiatric illnesses such as schizophrenia, very often overlaid with drug use – extremely common when people are living on the streets particularly.

Almost all have a long life history of trauma, which very much colours the way they present and the frequency with which they present.”

However, in a system where people are “churned” through, and the problems of alcohol and drugs and social vulnerability are not dealt with, “we just have this crisis carousel which is not working for anyone, most of all patients,” Stafford said.

She believed hospital staff want to help, but without a service that specifically addresses homelessness, they feel helpless, “and often they become angry and dismissive and rejecting of homeless people”.

In response to all these issues, the Homeless Team was set up in July 2016 as a collaboration between Royal Perth and the Homeless Healthcare General Practice (HHC GP), modelled on the UK Pathway charity organisation.

The impact of providing that support is profound, for them and the system. Stafford said:

People who are stably housed for six months drop their ED presentation rates by 50 percent and by one year (of stable housing) they drop by 80 percent.

When the doors open to housing and support, we see dramatic changes in people’s health and wellbeing.”

A report published on the first 18 months of operation of the Royal Perth Homeless Team found that 634 patients in the three years prior to their first contact with the team had nearly 4,700 ED presentations and 2,000 inpatient admissions, for a total cost of $19 million.

“Since the start of the team’s operation, there has been a marked reduction of homeless patients accounting for the top 20 frequent ED presenters, reducing from 80 percent (July-Dec 2016) to 45 percent (Jan-March 2018),” it said.

A graphic example of the merits of this approach came in a case study in the report, described by Dr Nigel Hewett, head of UK Pathway, who was in Perth in 2017 to support progress of the Royal Perth team.

The case study from Perth points both to shocking failures in care and what benefits can come when hospitals step out of medical models to attend to the social determinants of health, like housing.

Just as the Homeless Team arrived at the bedside of this patient, (he was) being examined by the consultant in charge and as we walked up to the bedside, the consultant was just saying to her team of junior doctors, I think this man is about to baseline we could discharge him home.

He was severely distressed, medically under treated, his psychosis was ignored and the key social fact, which was that he was street homeless [sleeping rough] was being, I think, wilfully ignored by the team in charge.”

Thankfully, there was a better intervention waiting, Hewett said:

The really exciting thing was that within a few minutes of being assessed, seeing a (Homeless Healthcare) HHC GP who knew him and had access to his medical records, and there was a Plan A and Plan B.

In the meantime, the HHC nurse, a part of the evening outreach team, was aware of plans in the background to try and get this man into long term accommodation in a mentally ill, old aged specific hostel associated with St Barts which would have a wait but he’d be the ideal person to go there.

This man went within ten minutes from potential to be discharged onto the streets because of a wilful disregard of his central social need, to having both a Plan A and a Plan B to stabilise him in hospital and then get him transferred to a permanent solution to his complex problems.”

This was inspirational, Hewett said.

Stafford said the more she worked with this very marginalised group of patients, the more she realised the solutions to “unload” the mental health system are in the community, and in the contribution of peer workers who can act as navigators, particularly for Aboriginal and Torres Strait Islander people.

Watch part of her presentation here.

The summit also heard about other initiatives to address the social determinants of health or provide much earlier interventions so people with mental health crises can avoid having to present to emergency departments.

St Vincent’s Hospital in Melbourne said that for many people with mental health issues, the emergency department is the “only option” for after hours care if they are feeling unsafe or need to talk to someone.

In response to that, and based on a successful trial of the model in the UK, the hospital has set up on onsite Safe Haven Café, as an alternative.

It’s not aiming to replace clinical services, but is a peer-led, non-clinical therapeutic service that “supports consumers to maintain their wellbeing, could enhance current treatment or directs them to mainstream services”.

Most importantly, St Vincent’s says in this video presentation shown at the summit, the café was “designed by consumers for consumers”.

Fran Timmins, Director of Nursing in Mental Health at St Vincent’s, told the summit that 42 percent of those who have attended the Safe Haven Café since it opened in May 2018 “have done so as an alternative to going to ED”.

Timmins had heard of the Hampshire UK model when working in the UK.

“I brought that back with me and was lucky enough to work in a system that actually does embrace innovation,” she said.

That included having the support of the hospital CEO and Executive and the Victorian Department of Health and Human Services “to try this idea and see if it can make a difference”.

The biggest challenge has been getting information about the café to the people who matter, who are often living very isolated lives.

But success has come via peer workers in the Emergency Department who raise the café while talking to patients who are waiting for treatment, to say ‘next time you’re feeling lonely, or isolated, or can’t afford a cup of tea, pop over there and they can help you out’.

The summit also heard of cross-sectoral efforts to apply specialist mental health skills to emergencies involving ambulances and police in both Queensland and Victoria.

Associate Professor Ed Heffernan, Director of the Queensland Forensic Mental Health Services, outlined a pilot program placing a mental health clinician into the 000 emergency call centre (7 days a week, 8am to midnight on weekends and 4pm to midnight on week nights), to help police respond better to the 160-plus mental health crisis calls, mostly suicide related, that come in each day from across the state.

To date, he said, there has been a fairly static model of response for police: welfare check, ‘everything’s okay, we’re out of there’, emergency department, criminal justice system.

The pilot program, which has a research component (Partners in Prevention: Understanding and Enhancing First Responses to Suicide Crisis Situations), involves training police but also is letting the health system learn more about how police act and respond.

“If we can improve the understanding of these mental health crises and police responses, we can look at alternatives to criminal justice or emergency health responses, ” he said. “We can look at psychosocial responses, for example, involvement of NGOs (non government organisations) and also enhance the responses of primary care.”

For example, he said, many cases can be referred back to the person’s GP, psychiatrist or other treatment team who often don’t know their patients are having crises out of hours.

The service follows up to them with emails to let the appropriate clinicians in the community know that “Joe Smith presented last night to police in crisis. Things have calmed down, but it’s probably worth checking”.

“One of the big advantages of this model is it can cover multiple mental health crises in real time. For example, in one 12-hour shift, our clinicians can be involved in 20 crises across Queensland, a huge geographical area.”

Evaluations of the pilots found that people suffering an episode of mental illness were less likely to end up in the local emergency department and that police units could be released to other duties more quickly, according to the State Government.

Police reported that a similar co-response in Western Australia meant that 75 percent of their callouts on mental health issues no longer went to emergency departments, Stafford said.

A summit panellist, Arunogiri stressed a social determinants approach to mental health crises, saying it was “not rocket science” to know that people with co-occurring issues like mental health and addiction, were affected by a whole range of difficulties including homelessness, family violence, and childhood trauma.

“We do ourselves a disservice by not understanding how to intervene to put a roof over someone’s head, get them their next meal, understand how we can keep them safe in the community,” she said.

“Those are conversations we really need to start to bring to our model of care in the ED space.” 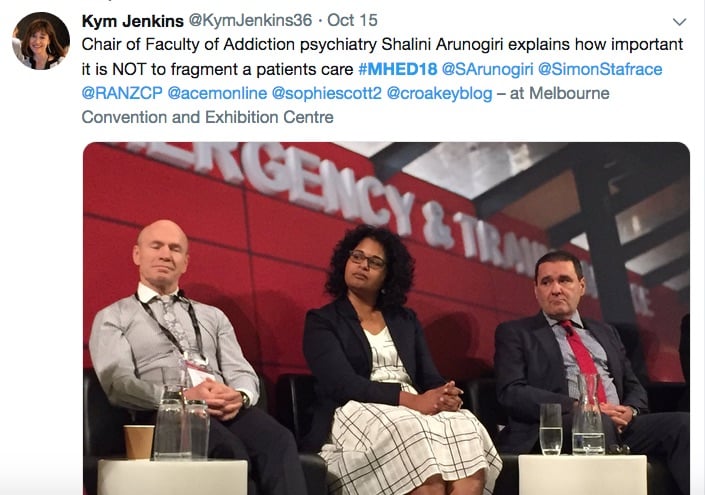 • Marie McInerney is covering the Mental Health in the Emergency Department Summit for the Croakey Conference News Service. On Twitter, check #MHED18.

PrevPreviousThe politics of prevention
NextThe Health Wrap: the latest news on primary care, mental health, the NDIS – and how it all links upNext