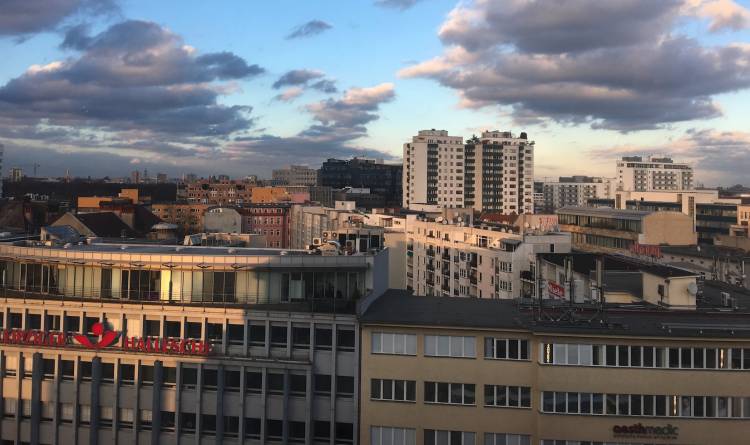 When inappropriate housing becomes a mental health threat: stories from Berlin and beyond

Introduction by Croakey: Unsuitable temporary accommodation can exacerbate the mental health distress already being experienced by refugees and asylum seekers, according to Dr Esther Schroeder, a doctor working in public health with a research interest in the mental health impacts of the built environment.

Part of the solution is for organisations and government bodies to recognise that the key experts on housing are often those who will be living in it, and to value their needs and aspirations rather than using temporary housing as a form of political messaging, she writes.

Her article below was written as part of Master of Global Health studies at the University of Sydney, as a contribution to Croakey’s #HousingJusticeAus project, which is investigating the wide-ranging impacts of housing upon health and health inequities.

In 2018, I was in Berlin as part of a research project investigating how the built environment affects mental health. When I met with women living in temporary accommodation for asylum seekers as part of this work, many of them apologised that they were not able to provide me with a cup of tea while we sat together.

They were housed in renovated office buildings with shared bathrooms and no kitchens which were still being described as temporary housing despite some of the women having been there for two years already.

Like over a million others arriving in Germany at that time, these women had been forced from their homes, often alone or with their children, and were trying to make a new life for themselves. Like many countries around the world when faced with a large number of asylum seekers arriving at one time, Germany had provided these women with temporary accommodation.

Repurposed buildings and units made out of shipping containers were two of the most common approaches to quickly accommodating large numbers of new arrivals into the country. This was temporary accommodation in name only, as many ended up living in this housing for many years before being allowed to choose their own homes.

Since this project, I have undertaken further research highlighting that the accommodation provided to refugees often impacts mental health.

Indeed, housing design for people experiencing displacement around the world rarely takes into consideration the impact of the built environment on their mental health and wellbeing. A better public and professional understanding of the impacts of housing on mental health would help improve the provision and design of future housing projects.

Some families were housed in converted office buildings with shared bathrooms and no kitchens, and culturally inappropriate food was brought in daily for them. Others were in compounds filled with units made from shipping containers.

These containers were unsuitable in terms of their design and construction and also sent a very clear political message that impacted the wellbeing of the residents – ‘these homes are temporary, you do not belong here long-term’.

Housing can affect mental health in many ways, many of which are intuitively understandable. Fresh air and access to natural light are vital mental health supports. Housing that allows individuals to express their cultural and personal identities also supports wellbeing.

For instance, for many of the families I met, there was a clear difference in the housing experience for those with their own kitchen, who were able to cook their children the meals they wanted to cook, rather than feeling like they were failing as parents by  having unfamiliar food delivered to them at set meal times.

The set-up of the housing, as one room units that did not allow for separation of family activities, was a challenge for some of the women I met, who were not able to have any down-time away from their children.

“For example, your room and the bedroom and the salon they have to separate, not the same, for your mind to refresh. To refresh your mind. This thing is good for the people.” – Eritrean mother

Having autonomy over housing choice and appropriate privacy and privacy of housing are also important factors for mental health. Those experiencing displacement have already lost so much control over their personal lives, including the ability to choose where they lay their head down at night.

On top of this, being deprived of even the sense of autonomy and security that comes from choosing to be in a private space had significant effects on wellbeing. For some women, their forced migration journey had included sexual assault.

It is incredibly stressful for these women to then be in a temporary room without a lock on the door, never feeling truly safe when they slept – and to be in this situation for years.

Privacy was also very important for personal cultural and religious expression. In the rows upon rows of converted shipping container units, women wearing a hijab needed to either wear their hijab at all times inside their own home or decide to have no natural light. This is because all windows exposed the entire length of the container unit, leaving no private internal spaces.

“When I first came here, because I didn’t feel so safe because of the door, I kept having nightmares.” – Palestinian Lebanese young woman in temporary housing in Berlin

Mental health and housing are also linked to the community in which the housing is situated.

People experiencing displacement face the challenge of not having internet access to speak to loved ones far away, parks or green spaces to take children to, or public transport to be able to access important school and healthcare services. For some, these services are available, but only in languages they do not understand or at a cost they cannot afford.

International organisations involved in working with people experiencing displacement have often failed to realise that housing is much more than a bed and a roof.

Even the term used by humanitarian organisations – shelter – indicates a lack of commitment to any kind of appropriate and safe housing.

A recent research film, “Shelter without Shelter”, has highlighted the need to rethink what the humanitarian sector considers to be appropriate housing. It examines the underlying societal pressures encouraging displacement housing to be constructed to appear temporary in order to placate both political leaders and host community expectations.

Released this year, the Mindful Sheltering report is the culmination of the 2021 Shelter and Mental Health learning event, where international organisations for psychological services and shelter and protective services came together to develop an approach to applying a mental health lens to providing housing for those facing displacement. Although this sounds simple, cross-sector collaboration on this scale had previously been missing.

At present, we see too often a cookie-cutter, basics-only approach to housing refugees that projects impermanence. When housing is focused on the needs of the individuals who will be living there, the benefits for wellbeing extend beyond mental wellbeing.

A compelling example comes from a CARE Philippines project, where after displacement from Typhoon Haian, housing was built uniquely for each family, an approach which even supported shopfront sections for the homes to support economic regrowth for the community.

This resident-led housing work in the Philippines is known as ‘shelter self-recovery’ and does not have to be more expensive or more difficult to run, but it does require organisations and government bodies to recognise that the key experts on housing are often those who will be living in it.

The international COVID-19 pandemic has contributed further complexity to the ways we as an international community view housing as not just our homes and places to stay, but also places that are variably appropriate as places to quarantine in away from others, or places to be locked down in.

Needing to quarantine or isolate becomes a significant challenge when people are living in conditions with overcrowding, poor ventilation, and a lack of community support around the housing.

This creates not only a logistical challenge but also the mental health challenges associated with not having control over one’s own housing and therefore the ability to keep one’s family and community safe.

COVID-19 and associated lockdowns and quarantine requirements have revealed to many Australians the impacts of our housing on our mental health.

The housing provided to asylum seekers in onshore immigration detention – bunk beds with no privacy, no autonomy over food preparation, and restricted access to green spaces – illustrates how housing can be used to communicate a political position, further damaging the mental health of  people who have already survived significant mental health challenges.

Recently, public attention has been drawn to the COVID-19 outbreak in Melbourne immigration detention accommodation, highlighting the already challenging mental health situation for refugees that has been exacerbated by the risks of infection.

As with all difficult situations, challenges that only last for a short period of time are easier to endure. However, inappropriate housing causes a greater strain on mental health the longer it is endured.

This applies to the asylum seekers in indefinite detention here in Australia, and to the women I spoke to in Berlin.

The women I met had all been in Germany for different lengths of time. The women who were newly arrived often still believed that they could cope with the challenges of their housing because they believed it to be temporary.

For the women in their third year of living in a single office room with their children, with no lockable door, no kitchen, and outsiders being able to see into their room at any moment, leading them to even sleep in their hijabs, this resilience was replaced by a dull despair.

“There are certain things you see, you need to avoid them. Because you’re not going to be here for very long time. That’s the problem.” – Nigerian woman asylum seeker in Berlin

For this Nigerian refuge, her inappropriate living conditions were causing her deep conflict and distress and were only manageable because she  believed they were temporary. Unfortunately and cruelly, these conditions were to be endured for years.

While for many refugees worldwide their housing has become an added mental health stressor amongst much other trauma and loss of autonomy, the increasing awareness of this issue in recent years has seen some projects lead the way in their approach to housing.

Changes to housing do not have to be elaborate or expensive, as many of the elements that link housing and mental health are rooted in the design approach and the understandings that housing is more than mere shelter. Even just changing the lens through which housing, particularly temporary housing, is seen can have important impacts.

As we’ve seen in the CARE project in the Philippines, for those working in humanitarian shelter and displacement settings, or for those involved in supporting asylum seekers in Australia, there are simple changes which can be made when the individuals and families living there are seen as the experts in their own housing needs.

Hopefully, we are seeing a shift from the concept of just providing shelter to house bodies to actually providing housing to support and accommodate real individuals and families.

We can all start engaging in this next time we see housing for displaced communities by thinking to ourselves whether the temporariness of the accommodation is unnecessarily causing further mental health harm for whom the housing is their home, and not a politically temporary shelter.

• Esther Schroeder is a doctor working in public health in Victoria and completing her Master of Global Health at the University of Sydney. As part of her studies she contributed this article to Croakey’s #HousingJusticeAus project. Previously she has worked on projects looking at the impacts of the built environment on mental health. Follow her at @WePublicHealth this week.

PrevPreviousShameful. Reprehensible. Also, some reasons for hope. Analysis from COP26
NextHealth leaders urged to empower the sector on climate actionNext