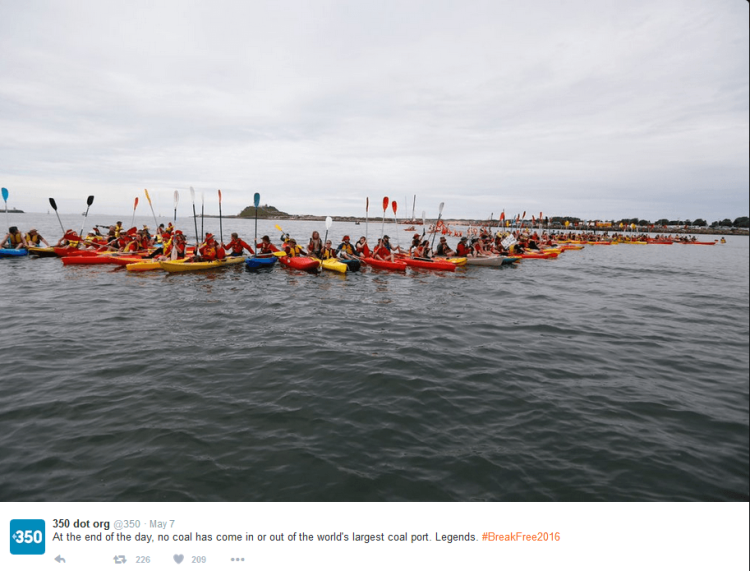 When is it too early to link climate change & extreme events? Or too late? On Canada’s Fort McMurray fire & the need for a ‘social vaccine’

The mantra was “jobs and growth”; the mood was upbeat; the only threats Turnbull saw on the horizon were refugees (“Australians know that we will keep our borders secure”) and the Labor party “with its higher taxing, higher spending, debt and deficit agenda”….

He had not a word to say about global warming. Yet despite him, that will be fought over again in this campaign as it has been – unresolved – in the last three national election campaigns in this country.

How could it not be? We’ve had another summer of record heat; half the Great Barrier Reef has been severely affected by coral bleaching and we continue to belch CO2 into the air.

Australians want action. Polls year after year have shown we believe climate change is real. We know Australia isn’t doing enough. We are more uneasy than ever that it’s Australian coal destroying the atmosphere.

But the political system can’t deliver a solution. 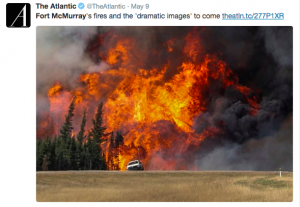 In the post below, an updated version of two earlier posts at his Global Change musings blog, Colin Butler, Professor of Public Health at the University of Canberra, asks how can we shift that problem in the face of disasters like the catastrophic Fort McMurray fire in Canada. When is it right to link climate change with extreme events: when is it too early and when is it too late? And is it possible to develop a ‘social vaccine’ so that we ultimately act?

The tension is to be seen also in this report from Guardian Australia over researcher concerns that media outlets ‘exaggerated’ the global warming link to new research on the sinking of Pacific islands – conflating sea-level rise with climate change.

In the meantime, see this stunning animation of spiralling global temperatures from 1850-2016 tweeted this week by University of Reading climate scientist Ed Hawkins (tweeting at @ed_hawkins).

And Croakey readers can follow the two week Break Free From Fossil Fuels action to keep coal, oil and  gas in the ground or via the hashtag #breakfree on Twitter. As the feature image above shows, 2,000 people shut down the Newcastle port, the world’s largest coal port, for a day on Sunday as part of the BreakFree actions taking place globally. 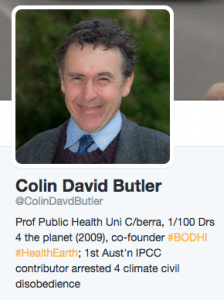 The terrifying and catastrophic fire in Fort McMurray, Alberta, Canada, still burning, is almost certainly worsened by climate change. Even Scientific American is saying this. This video is convincing.

Here I want to discuss whether and when this should be pointed out, including to people who have suffered from the fire and are experiencing profound grief.

I suggested last week (on the day the city was evacuated) on Twitter, that it’s like telling a guy with a heart attack to stop smoking. I used to be a family doctor, and I have advised and tried to help many smokers to quit. Few listen. When I was a very junior doctor, working in hospitals, seeing people (usually men) following their admission for a myocardial infarction, I do remember consultants discussing the link with smoking very soon after the event.

I haven’t researched to see if advising patients at or soon after the time of their symptoms is more effective than at other times (for example, a year before or a year later), but I think it probably is. Health promotion warnings for smoking generally associate unpleasant health events (such as cancer) with the cause (for example, smoking). This suggests that there is more effect if the warning is linked to an unpleasant effect. Later I will discuss the idea of a “social vaccine“, where a balance is needed between too much anxiety and complacency.

I read the comments in a Canadian news report about the fire and I noticed that when an occasional commentator mentioned climate change he/she was generally jumped on by the others. I posted some tweets about that, and woke up with a bag full of hatemail; people accusing me of being indifferent to suffering and loss; even that I gloated about it, and was behaving like a child.

Some of my tweets included:

“Agree #climate change. #FortMacFire http://www.slate.com/blogs/the_slatest/2016/05/04/fort_mcmurray_alberta_wildfire_forces_major_evacuation.html?wpsrc=sh_all_dt_tw_top … via @slate But many resist acceptance, just like smokers until a heart attack” 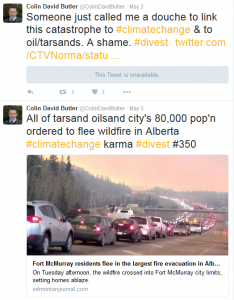 I also linked the intensity of the oil sand mining and refining (a highly energy intensive process which consumes about a fifth of the total energy in the tarsands) process with karma (the principle of cause and effect), which, though true, perhaps was the major cause for the backlash I received. This was only mentioned in one tweet (right).

However, worse was to come.

The following message was sent to someone at my university, apparently in response to my tweets. It was hostile and angry, claiming that I was “taking victory laps” as a result of the intense suffering now occurring in Canada.

Someone who identifies as a staff member in the faculty of health, Colin David Butler, is taking victory laps, on twitter, on top of people who are currently running for their lives.
https://twitter.com/ColinDavdButler

Not only are his tweets shameful, but they are scientifically inaccurate – wild fires have been in the Boreal Forrest for its entire existence. It is highly dubious to claim climate change had anything to do with a city burning down.

He is sullying the name and reputation of the University of Canberra and quite frankly Australians in the eyes of Canadians and compassionate and empathetic people everywhere.

While I don’t have any suggestions for course of actions to deal with his smug and undeserved self-importance, I do believe as dean, you should be made aware of it.

name withheld by me

Eric Holthaus, a meteorologist writing for Slate, has also argued that now is the time to discuss the links between the fire and climate change. He too has experienced a backlash for linking the fire with climate change, and describes several others who have, including Elizabeth May, the leader of the Canadian Green Party.

May in turn was criticised by the Canadian Prime Minister, Justin Trudeau, who claimed that her suggestion that the disaster was “very related to the global climate crisis” was neither helpful, nor accurate. But he also said: “It’s well known that one of the consequences of climate change will be a greater prevalence of extreme weather events around the planet.”

I’ve found Twitter is not a good environment for thoughtful discussion. I well understand that the loss and trauma of this fire is extremely emotional, and in that environment it’s easy to misinterpret the intention of others.

So, let me state:

2. I am extremely sympathetic to the people affected. (Including consequent to my own experience with wildfire and a housefire.)

3. I fear much worse is to come. For that reason I became the first Australian IPCC contributor to take part in civil disobedience leading to arrest to warn about climate change and to protest at Australia’s glacial pace of policies to address climate change.

My motivation for doing this is to practice a form of preventive medicine. That might sound grandiose; it is not meant to. I have given over 70 invited talks at international meetings or at universities overseas on this topic, I have edited or co-edited two relevant books, including “Health of People, Places and Planet“. I co-founded two NGOs, each working to alleviate poverty in low-income settings. My blog and my other use of social media is an attempt to also reach out to the public, to people who, eventually, politicians and other decision makers may heed.

There’s never a good time to give bad news

For many years I have observed that politicians, even Greens, are reluctant to publicly link climate change with phenomena such as wildfires, floods and severe storms, especially when intense human suffering has occurred. I think this is for two main reasons:

The media echoes the silence of politicians, causing many valuable lost opportunities for public education. Cyclone Winston is a recent example. Striking Fiji in 2016 it killed 42 people and is reported to have cost at least US$486 million in damage, roughly 10 percent of the nation’s GDP; the equivalent of 15 Hurricane Katrinas hitting the United States at once. I heard many news reports of this cyclone (the strongest ever in the Southern Hemisphere) on Australian mainstream media; not a single such report mentioned climate change.

My argument draws on the health analogy – as I suggested, many smokers are resistant to anti-smoking messages, but more receptive the day after their heart attack. Public attention is short – most people not personally affected will soon forget even this dreadful fire in Alberta. For sure, making the link with climate change is not the highest priority for public figures, but someone should do it, and the message should not be delayed too long.

Alternative livelihoods that are not based on fossil fuels do exist, including from the harnessing of cleaner energy. People in the near future will not need to work in the oil sands industry to make a living and to also contribute to energy security.

Today global civilization is at risk from adverse global environmental change. Numerous civilisations have collapsed in the past. We should not assume ours is invulnerable. Could a “social vaccine” be developed to help protect against collapse?

This is something I first described in a chapter in my first edited book “Climate Change and Global Health” in 2014 and then in the blog.

Such a vaccine would stimulate civilisation to protect itself, due to collective self-interest. It would deliver a small dose of anxiety, but not enough to induce paralysis. This would work by ‘immunising’ enough people to generate sufficient self-corrective action. Something like this was employed by the peace movement during the Cold War. The discomfort arising from the linkage of climate change, the tar sands industry and this horrible fire (and the not dissimilar Slave Lake fire in 2011) is part of this social vaccine.

Ignoring the links between climate change and catastrophe is surely the least helpful course of action over the long run. To do so will generate more denial, more complacency, and more suffering.

I think the backlash from Canada is understandable, given the grief and fear that so many are now experiencing. Trudeau, newly in power, must also tread a fine line. If he offends the oilsands lobby too far he will surely court disaster, yet others, including Elon Musk and Bill McKibben, are indeed calling for politicians to do just this. Musk has called for a revolt against the fossil fuel industry, accusing politicians of bowing to the “unrelenting and enormous” lobbying power of the fossil fuel industry.

A growing number of locations and populations around the world are affected by climate change, especially in low-income settings. It is not just Fort McMurray. These include millions of the poor in India, suffering heat, drought and groundwater depletion and those affected by recent superstorms in the Philippines and Fiji.

There is encouraging news that technological innovation which could soon lower emissions growth, but  the challenges of sustainable development and the promotion of equity are much deeper than solving the energy crisis and better technology.

There is still, probably, time to reduce the worst effects of climate change. But if we don’t face up to the links then we will be like a smoker who not only gets a heart attack but dies of lung cancer.

PrevPreviousWhy prevention, equity & primary health care should be at the heart of 2016 Federal Election
NextSmoke & mirrors or harm reduction breakthrough? A compilation of verdicts on electronic cigarettesNext