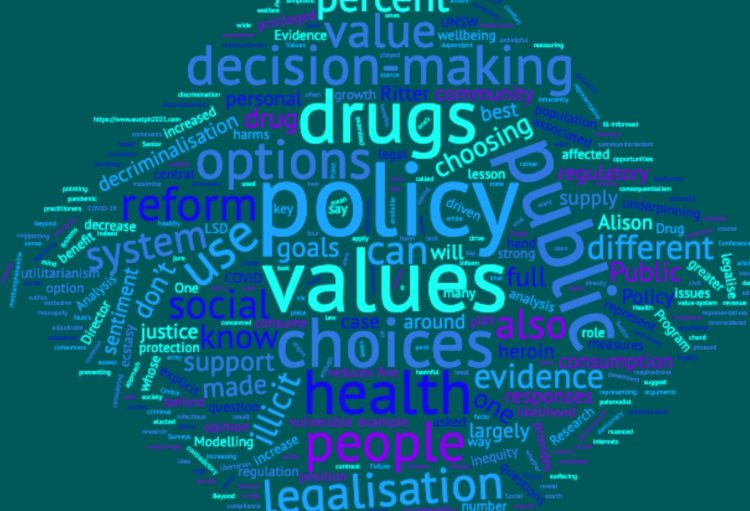 Introduction by Croakey: What values should inform decision-making about the pandemic; whose values should be privileged at times like these?

These are some of the questions arising from a keynote presentation to the recent Australian Public Health Conference that examined the role of values when considering regulatory options for illicit drugs.

Professor Alison Ritter AO, Director of the Drug Policy Modelling Program at UNSW, argued that “surfacing the values behind decision-making is a key task for public health”.

Some of the audience’s responses via Twitter suggest her comments struck a chord (see a selection of tweets below the article).

Indeed, across most public health issues there are usually an array of policy choices. How does one adjudicate between different policy choices?

One common way of choosing between policy options is to consider the evidence. We all want evidence-informed policy.

In the case of drug reform, decriminalisation of the personal use of drugs is an evidence-based option. But for some of the other options, such as full legalisation, there is a very limited evidence base. Evidence is often ambiguous, contested or contradictory. In the absence of strong evidence, elected representatives can assess public sentiment.

Public support for policy measures is essential, a lesson reinforced by COVID. The acceptability of policy measures increases the likelihood of compliance. It is also consistent with democracy (where policy reflects the will of the people).

On the one hand this is reassuring; people do know when they don’t know. On the other hand it provides no comfort to policy makers looking to decide on regulatory options based on public sentiment.

A key question also needs to be asked “which public”? There are strong arguments for suggesting that the people most directly affected by the policy should be the ones whose voices are heard.

In research with people who inject drugs, when asked about legalisation of heroin use, 55 percent support, 33 percent oppose and two percent don’t know.

Here we can see the wide difference between the ‘general population’ and the affected community. It is also worth pointing out that the idea of ‘self-interest’ (or phrased as ‘people who use drugs will of course say they should be legal’) does not play out here.

Public sentiment can be sophisticated, nuanced and beyond self-interest. The tendency to dismiss public opinion as ill-informed or unhelpful needs to be reconsidered.

Beyond evidence and public opinion, values have a central role to play in choosing between policy options.

In the case of regulation of illicit drugs, there are a number of different policy goals: to decrease consumption (or preventing increased consumption); to decrease harms associated with consumption (irrespective of prevalence of use); to increase access to healthcare and social welfare services; or to increase government revenue.

Each of these goals represent different values about drug use, individual freedom, economic growth, and public health. It is vital that there is clarity about the goals of a policy reform such that the values that sit behind it can be made explicit.

Again, a clarion lesson from COVID is to surface the values associated with public health goals.

Cannabis legalisation has been advocated by many people who consume cannabis, who wish to do so legally. Their interests are in a safe, reliable, legal supply. In one sense, the consumers represent a civil liberties position: the freedom to consume a substance and to do with one’s mind and body what one chooses.

This classic libertarian stance is in contrast to the more paternalistic public health position, where concern for well-being, increasing the likelihood of healthy choices, and protection of vulnerable, marginalised people (including those dependent on drugs) from greater harm are paramount.

Economic growth, public health, and individual freedom are each played out in the policy choices around legalisation of currently illicit drugs.

One value system that can drive decision-making is that of utilitarianism (also called consequentialism), which aims to maximise utility or wellbeing and brings about the best state of affairs. Utilitarianism turns largely on empirical questions – and in the case of regulating illicit drugs, analyses the harms and benefits of each reform option.

An alternative value system underpinning decision-making is communitarianism – that which provides benefit to society as a whole. Here community solidarity and social cohesion are seen as most important and the collective good is greater than individual freedom.

A communitarian value system would approach choice through an analysis of which reform option(s) best aligns with community values.

Paternalism values the protection of members from their own failings, and from the consequences of their own poor decision-making. Analysis of which reform option(s) to choose under a paternalist value system would favour those options which increased opportunities for health and social wellbeing of the vulnerable.

A fourth value system is social justice, that which reduces inequity. Analysis of which reform option(s) reduces discrimination and inequity, and empowers the marginalised.

These four value systems are not mutually exclusive, but will result in different choices being made.

By way of a simplistic example, under utilitarianism, we would legalise those drugs that are least harmful. From David Nutt’s (2010) analysis, these would be mushrooms, LSD, ecstasy, khat, mephedrone, and cannabis.

Under a social justice value system, we would legalise those drugs used by the more marginalised and disempowered, and for the people who would most benefit from health and social rather than criminal justice responses. This would mean legalising heroin and methamphetamine (and not cannabis, ecstasy, LSD – drugs largely consumed by the privileged white).

While this piece has concerned the policy choices around regulation of currently illegal drugs, these issues apply to all aspects of public health, whether it is obesity, infectious diseases, or COVID-19.

We have no lack of choices in choosing between different policy options. Those choices can be driven by best available evidence, but also require public support for full effectiveness.

We have  largely ignored values – to our peril. Values are central to both the choices being made and to the policy decision-making processes. 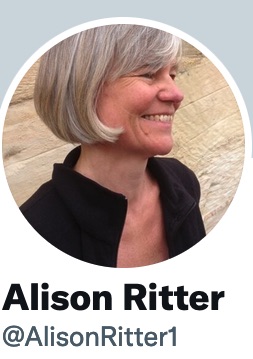 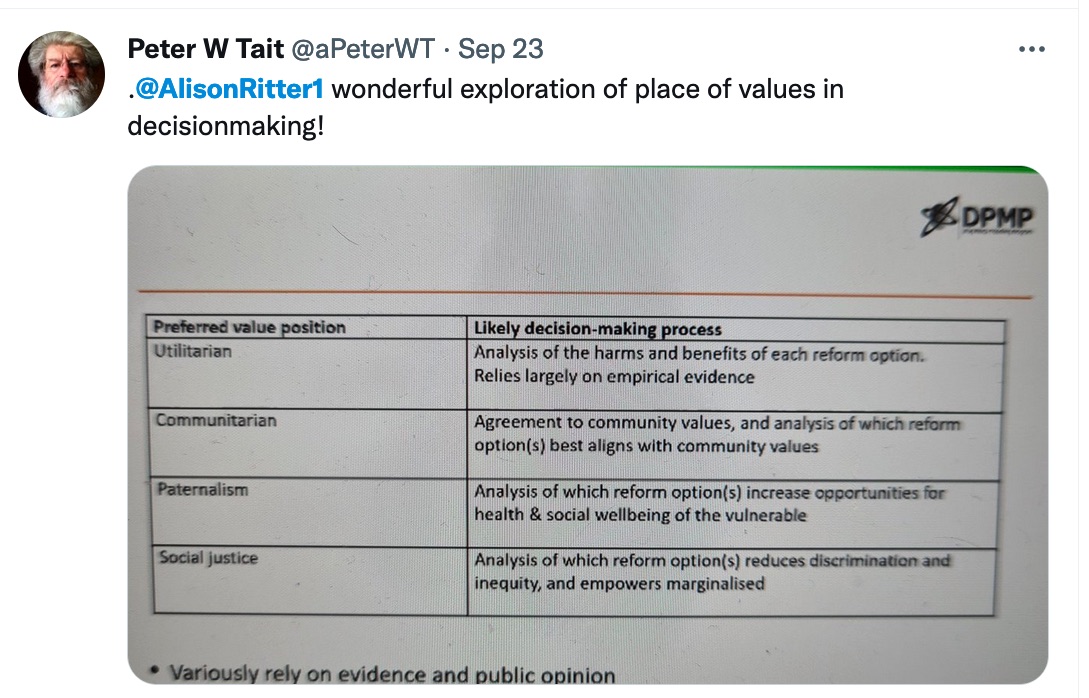 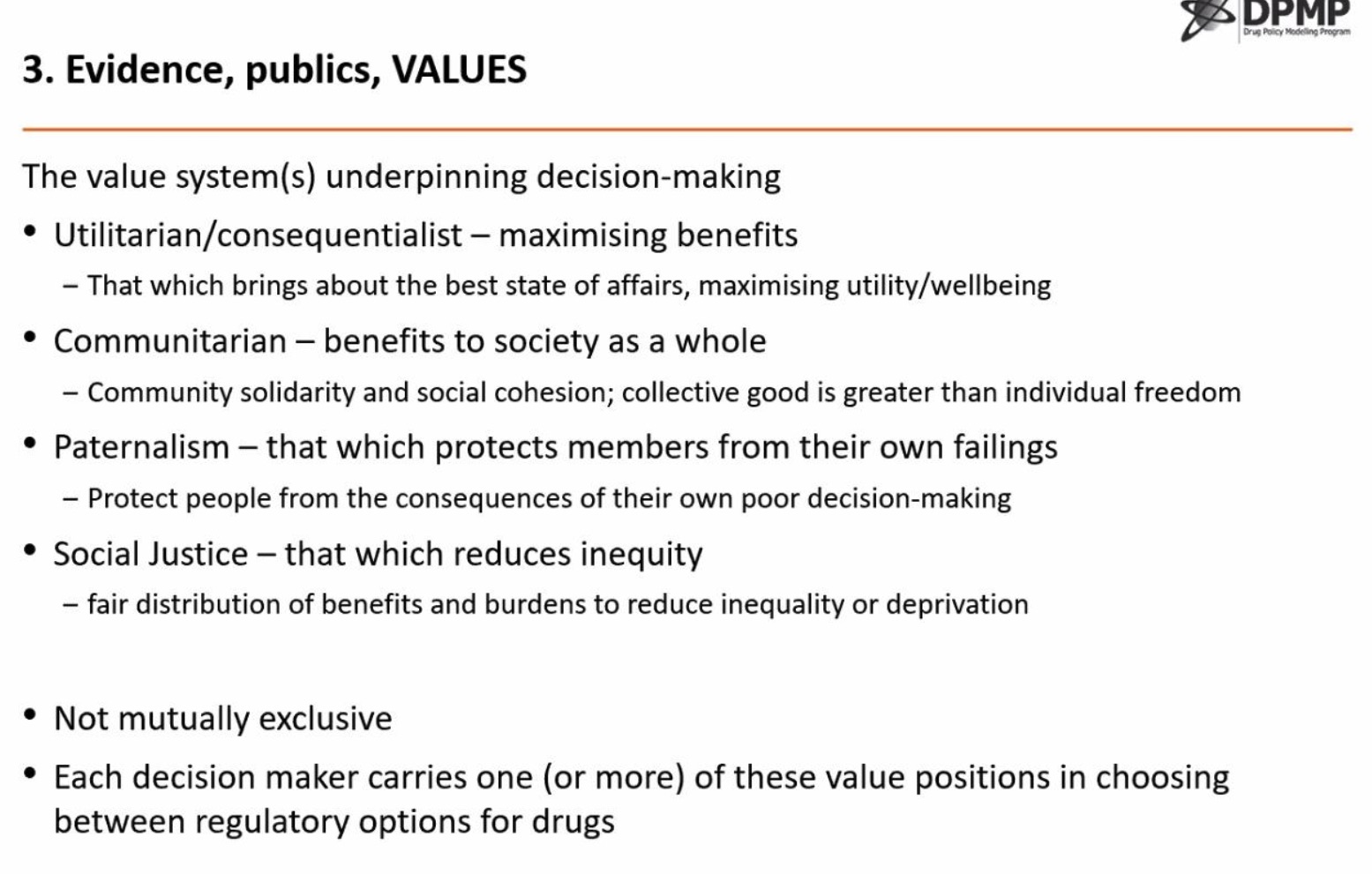 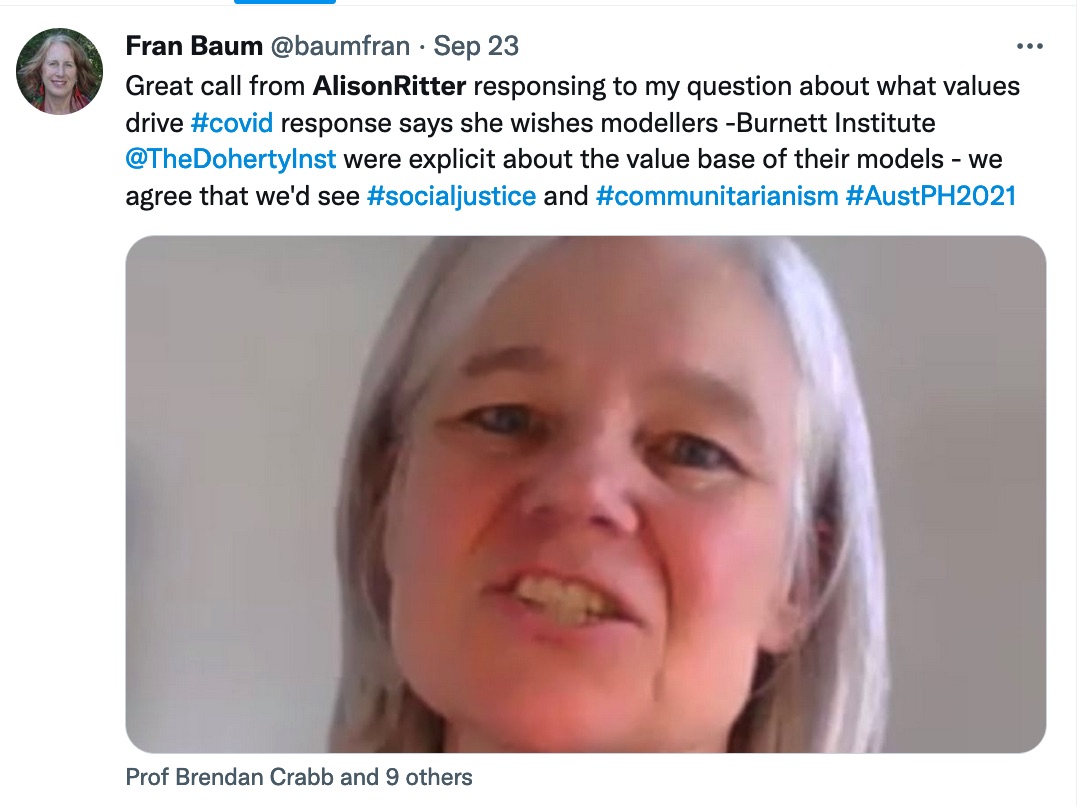 See our archive of stories on illicit drugs and health.

PrevPreviousCOVID SNAPS: on covidiots, the high price of “freedom” and liminality
NextYouth voices reshaping health at the national summitNext