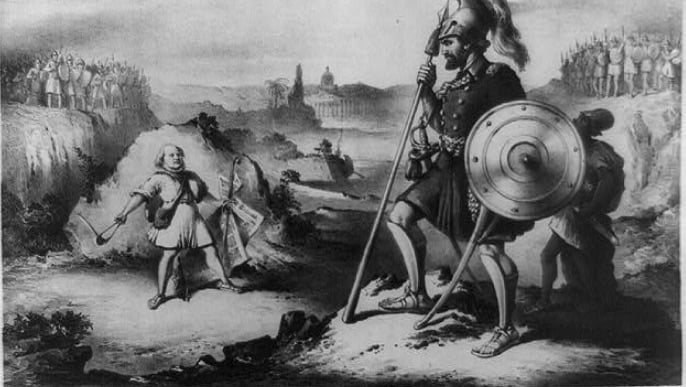 An 1872 drawing of David and Goliath (with contemporary overtones). Courtesy of the Library of Congress, US

When it comes to the Goliaths threatening public health, is it time for a unified response?

The importance of developing coherent policy to address non communicable diseases (NCDs) was highlighted at a global alcohol policy conference in Melbourne today, according to #GAPC2017 reports on Twitter (see related tweets at the end of this article).

This approach recognises the linkages between unhealthy industries (such as tobacco, junk food and alcohol, which are causing the “industrial epidemics” of NCDs), as well as the commonalities of these industries’ strategies in creating roadblocks to effective policy action.

It also recognises the shared lessons across diverse areas of public health, including the importance of building alliances and coalitions for change, especially in “David versus Goliath” battles, the need for cut-through advocacy, and the usefulness of such strategies as encouraging divestment (the conference heard, for example, of efforts to stop superannuation funds in Norway investing in alcohol companies).

It is important that these moves towards more coherent policy and silo-busting approaches across public health also include a focus on climate change and the fossil fuels industry.

Below, Professor Alistair Woodward, Head of Epidemiology and Biostatistics at the University of Auckland, makes a strong argument for climate change to be central in public health discussions.

Beneath his article are some tweets from a recent presentation to the International Society of Environmental Epidemiology in Sydney by Professor Jonathan Patz, Director of the Global Health Institute at the University of Wisconsin – in which he called for us to start using the terminology, “global climate crisis”.

Sounds like a sensible idea, not least when researchers are warning that Melbourne and Sydney should prepare for 50 degree Celsius days. (Of course, we are not remotely prepared, as the Doctors for the Environment Australia reminded us this week.)

How climate change is affecting health

Climate change is commonly framed as an energy issue, a security concern, a political struggle, or a brake on economic growth. Those of us who work in public health may assume otherwise, but in fact it is relatively unusual for the climate change story line to be one about human health and survival. 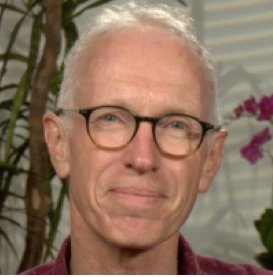 Why should this be? Initially, when climate science was principally the domain of physicists and atmospheric chemists, there was little known about the implications for health.

Perhaps the reductionist paradigms that suited medicine so well in the past did not make this an attractive area for researchers hunting dollars and citations. And the way that climate change has been politicised in some countries in recent times has dominated public imagination.

But it would be surprising if climate change was not a health issue, because climate affects almost every other aspect of our lives.

Here are some of the measures that have been related to daily temperature – maize yields, farm incomes, math test scores, productivity, household migration and profanity in social media. These, and the number of deaths per day, tend to follow the same U shaped pattern.

The Goldilocks rule, “not too hot, not too cold” does not apply just to porridge. In many aspects of human welfare, there is an optimum climate, related usually to what is most common or familiar. Death rates for instance tend to be lowest around the 50th to 75th percentile of daily temperature.

Climate and climate change act on health directly, through extreme temperatures for instance, or flooding, as demonstrated so vividly by recent storms in the Americas.

One of the most poignant reports from Hurricane Harvey was a picture of a frail old person in a hospital bed. She was still wearing an oxygen mask, and a drip set was taped to one arm, but her ward had turned into an inland sea. An extraordinary storm, turbocharged by global warming, turned upside down the world’s most expensive health care system.

There are indirect effects also, that may be more difficult to pin down, but potentially, carry greater weight. They include impacts due to ecosystem disruptions (crop failures, acidification of the oceans), and climate-related social disturbances.

Climate is not the only influence on conflict, or even the major cause, but it can be a potent threat multiplier.

For instance, severe drought around the Mediterranean precipitated a collapse in the rural economy in Syria around 2009, and led subsequently to a cascade of social disasters and human suffering.

Mark Carney, Governor of the Bank of England, has referred to “transition risks”. Carney argues these are not trivial concerns, because managing climate change successfully will require radical change, and radical change may be threatening.

Consider the last energy revolution before this one – the shift from human and animal labour to machines powered by fossil fuels led to a public health crisis that took 20 years off the life expectancy of urban populations.

This time round, imagine that fossil fuels were priced in full proportion to the environmental damage they cause. If a carbon price of say 200 dollars a tonne was applied abruptly, without relief, it would be an enormous challenge to sustain present health care arrangements in any country.

However, challenge is just one side of the climate change coin. If we get it right, the 2015 Lancet Commission on Health and Climate Change reported, “tackling climate change could be the greatest opportunity of the 21st century”.

Approximately one third of greenhouse emissions globally come from agriculture, and there are routes to a low carbon food future that would be good for both the climate and human health.

Marco Springmann and colleagues have estimated, for instance, that well-designed greenhouse taxes on food could save the release of a gigaton of CO2 and 500,000 premature deaths, each year.  Most of this win-win result would be achieved by reducing the consumption of red meat in rich countries.

There are opportunities of this kind close to home because modern health care comes with a hefty environmental price tag. If the US health sector was a country, to pick one albeit extreme example, it would rank 13th in the world for greenhouse gas emissions.

But it is possible to make win-win changes. There are interventions available that simultaneously reduce the carbon footprint of healthcare, bring economic gains and improve health outcomes. (World Bank) They include investments in renewable energy and energy efficiency, sustainable transport options, waste minimization, low-carbon procurement policies and green building design.

Health professionals have taken a lead on other big social concerns, such as poverty reduction, protection of immigrants and refugees, and prevention of nuclear war.

And the momentum on climate change is growing, thanks to groups such as Healthcare Without Harm, EAT, Orataiao and the Climate and Health Council.

The new Director General of the World Health Organisation, Dr Tedros Adhanom Ghebreyesus had made it one of his five priorities. Climate change is officially a health issue

• Professor Alistair Woodward is Head of Epidemiology and Biostatistics at the University of Auckland. This article arises from research he presented to a Royal Australasian College of Surgeons Annual Scientific Meeting at Te Papa in Wellington on 18 August. He and Kirk Smith (UC Berkeley) led the writing of the health section of the 5th assessment report for the Intergovernmental Panel on Climate Change.

He is working with colleagues from China Centres for Disease Control on environmental health issues in that country, and in New Zealand is engaged in intervention studies to test the effects of street changes on walking and cycling.  Alistair and Tony Blakely have written a book on the history of human life expectancy. Recently Alistair and Cameron Muir, an environmental historian, completed and launched Tony McMichael’s last book. McMichael died in 2014 – his magnum opus, “Climate Change and the Health of Nations” was published by Oxford University Press in 2017.

More on climate and health

The following tweets are from Dr Jonathan Patz’s presentation to the 29th Annual Scientific Conference of the International Society of Environmental Epidemiology in Sydney last month. Read his related article: Quitting coal a health benefit equivalent to quitting tobacco, alcohol and fast food. 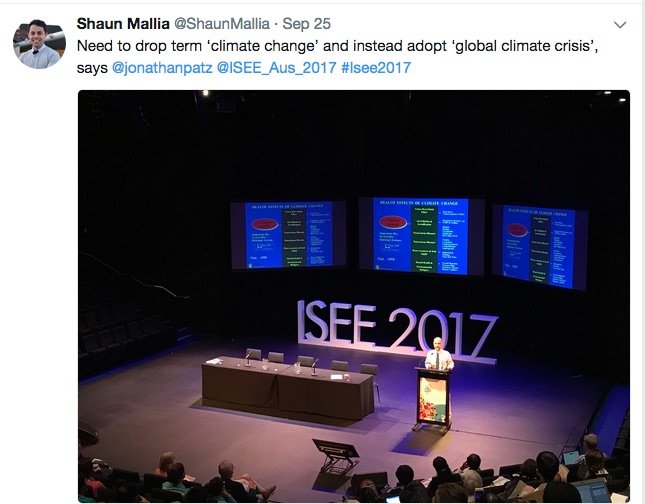 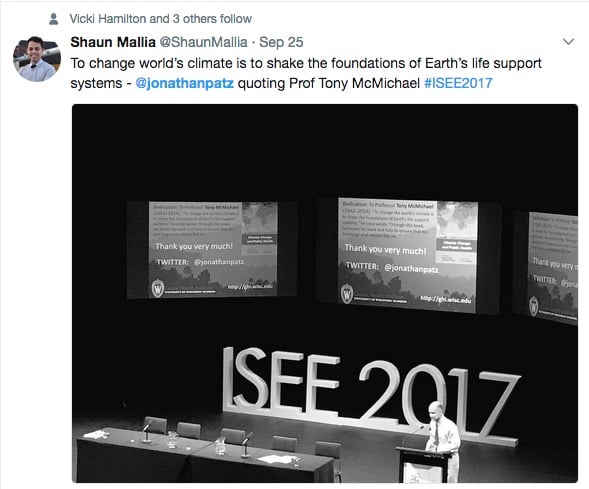 Jeff Collin, Professor of Global Health Policy at Edinburgh University, gave a powerful overview of the commonalities of harmful industries, suggest tweet reports from the conference. 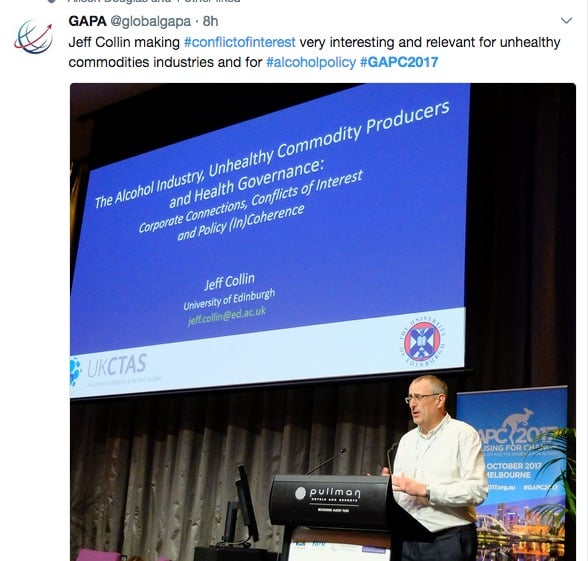 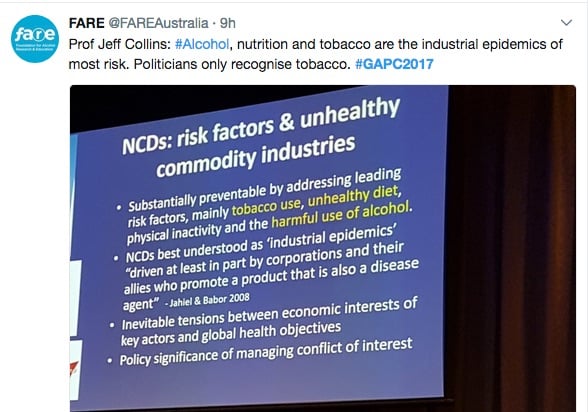 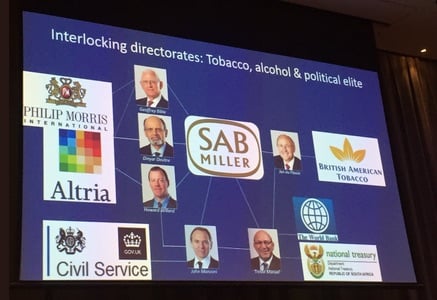 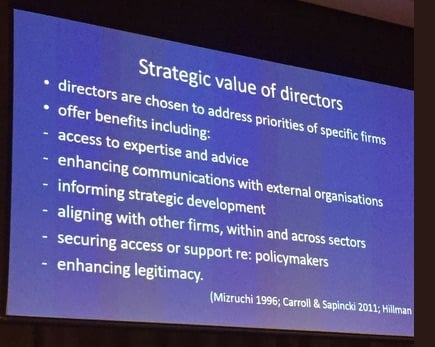 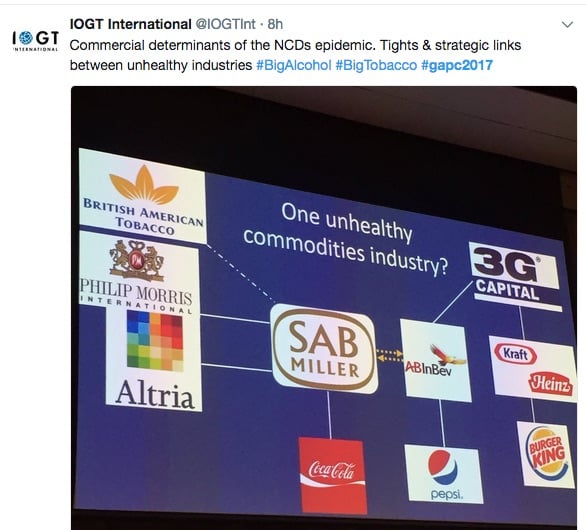 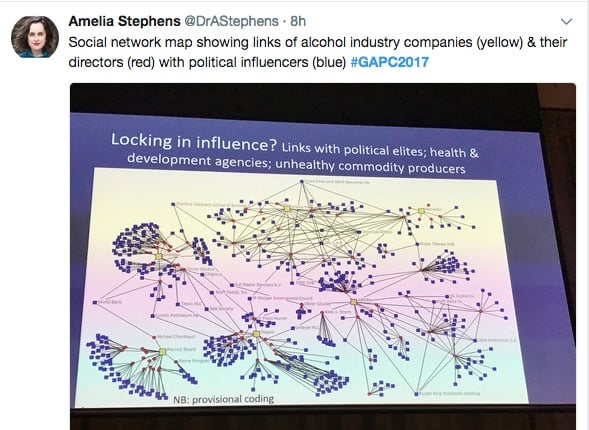 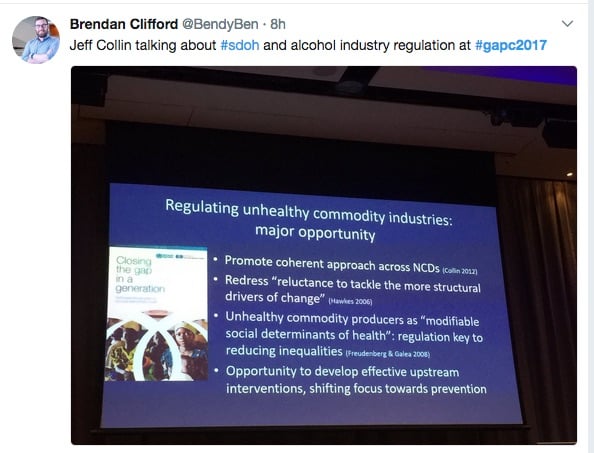 The conference also heard some tips on how to win “David Vs Goliath” battles, from the Scottish experience of introducing minimum unit pricing for alcohol (read more about this here).

The tweets below suggest that many of the lessons may also be useful for those fighting the fossil fuel Goliaths. 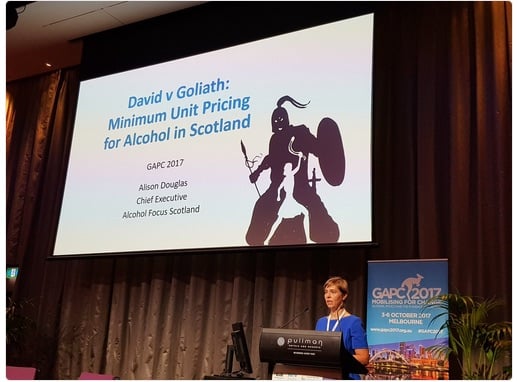 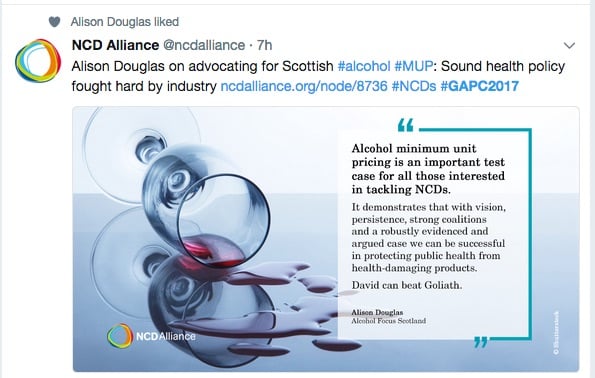 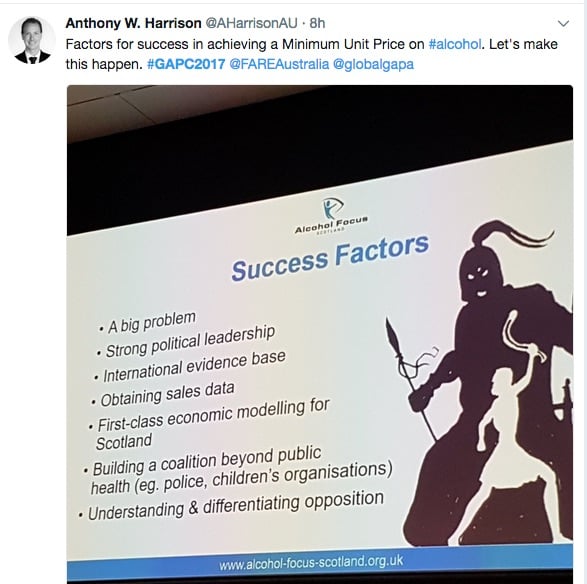 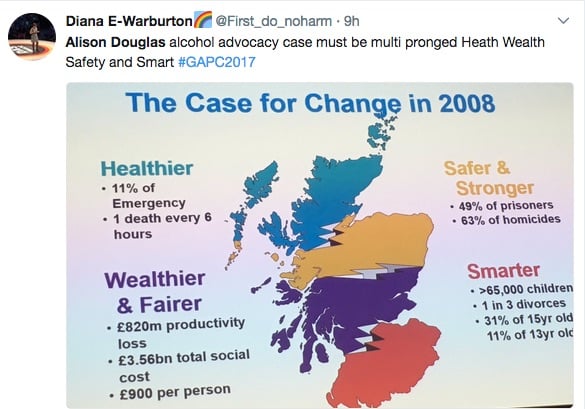 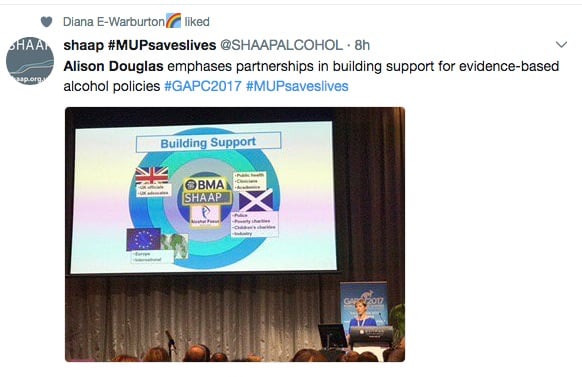 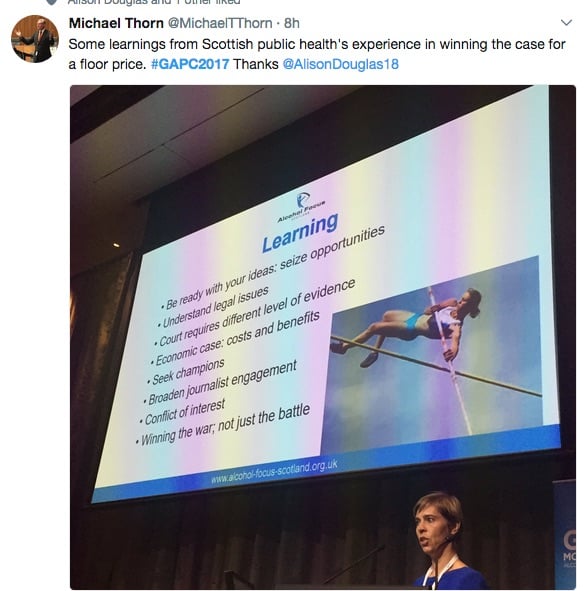 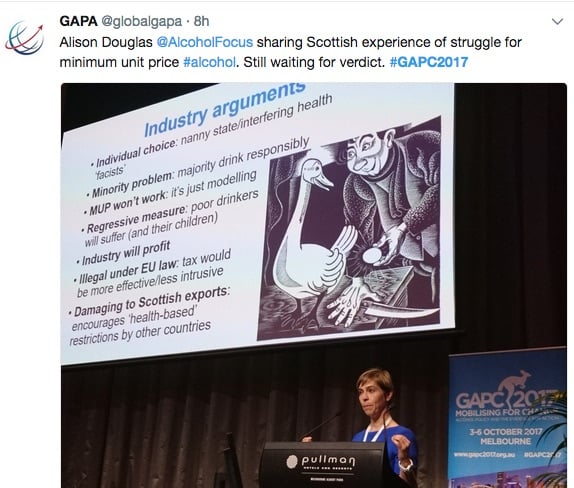 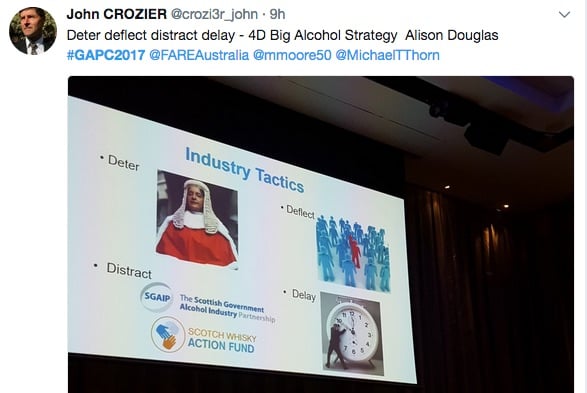 Efforts to undermine the political power of harmful industries must address the $$ issues.

In Norway, this is taking the form of encouraging divestment; other presentations highlighted the need for reform of political donations – another issue relevant for a whole host of harmful industries. 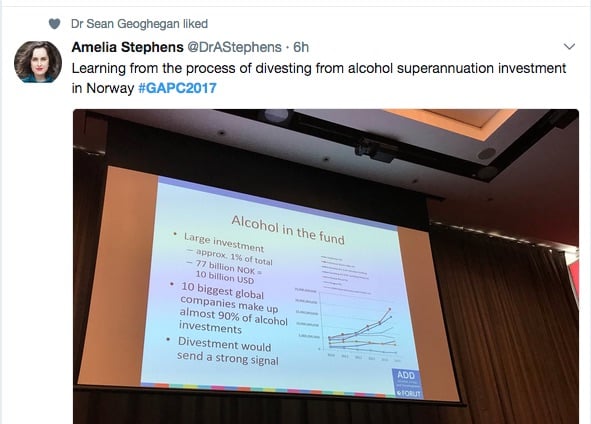 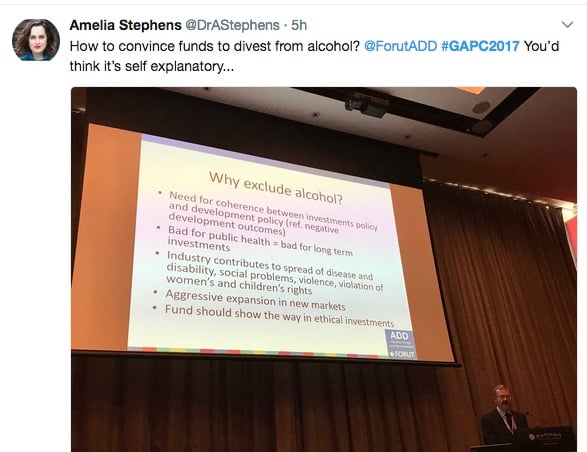