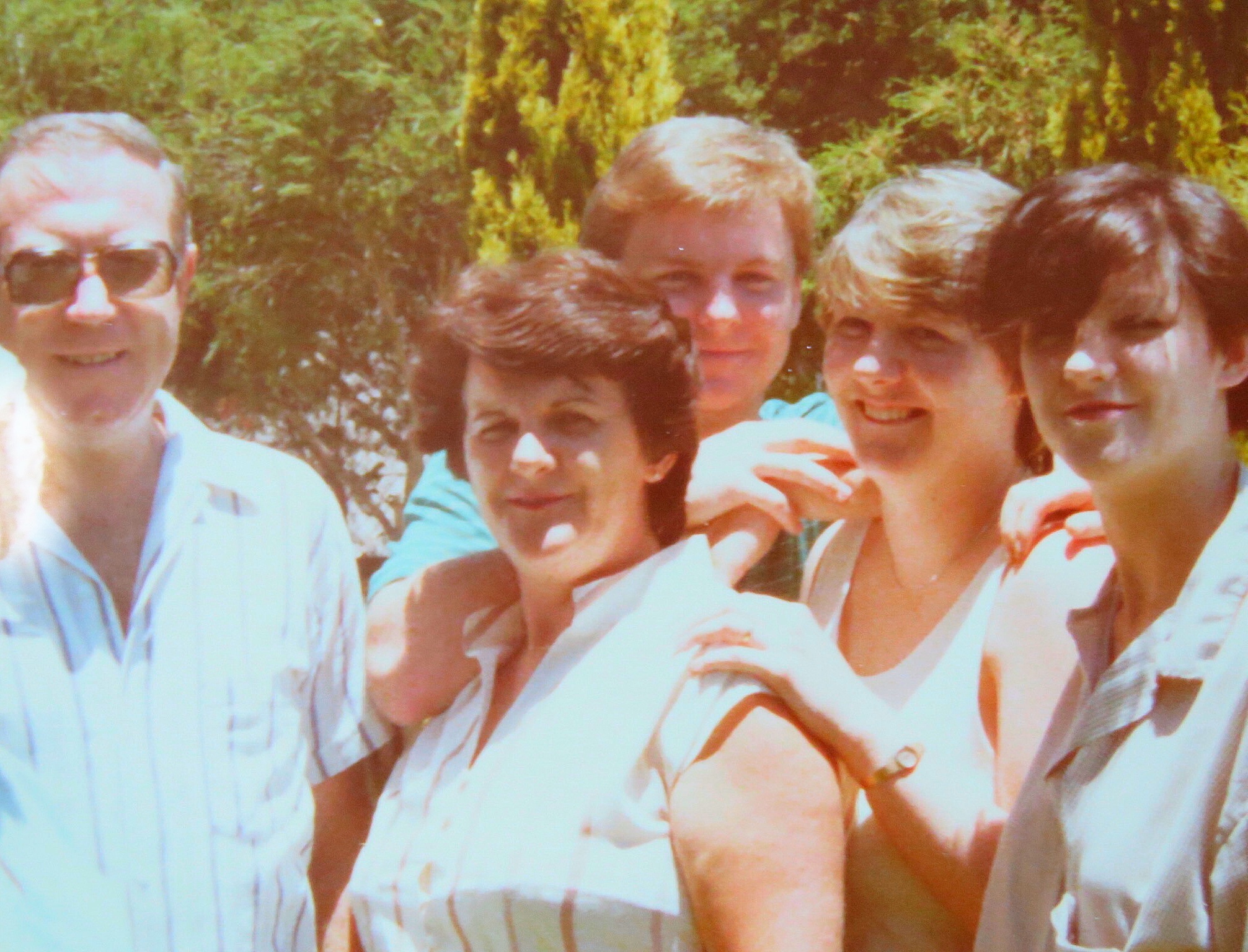 When old habits die hard: the smoke and mirrors of vape

Introduction by Croakey: Tobacco use contributes to more than one in eight deaths in Australia and remains the leading risk factor for premature mortality, with the burden of past smoking continuing to rise despite progress on cessation at a population level, a new report showed Thursday.

The Australian Institute of Health and Welfare report Burden of Tobacco Use in Australia paints a grim picture of the cost of smoking, showing it contributed to some 21,000 deaths in 2015, and that the legacy of past use rose by 15%, even as the number of Australians taking up smoking continues to fall.

While the burden associated with current smoking fell, the burden linked to past smoking rose by 15%. This is probably because some of the diseases associated with smoking—such as lung cancer and chronic obstructive pulmonary disease­—can take many years to develop.”

Cancer accounted for the majority of the burden (43% — mostly lung cancer), a third was attributable to chronic obstructive pulmonary disease, 10 percent to coronary heart disease and 3.1 percent to stroke. Importantly, according to the AIHW, three quarters of the smoking-related disease burden was fatal.

There is a clear socioeconomic and geographic gradient to the burden, with people living in the most disadvantaged areas experiencing a burden 2.6 times that of the most advantaged, and it impacting most acutely in the Northern Territory and remote Australia. 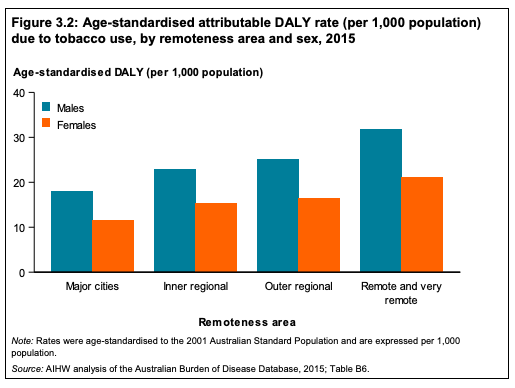 The report’s release was timely, with the Oceania Tobacco Control Conference convening in Sydney this week.

Unsurprisingly, e-cigarettes and vaping (the burden of which was not quantified in the AIHW report) were a popular topic.

Looks like they need a bigger room for the ecigs breakout at #OTCC2019– line is way way out the door. Sorry to miss it but I’m no good sitting on the floor anymore! Looking forward instead to great session on advocacy!

It’s all about cracking down on the sneaky ways big tobacco tries to wriggle around the rules by identifying new and indirect ways of marketing their dangerous and deadly products, and making sure our greatest sporting spectacles aren’t used as vehicles to peddle smoking.”

It follows a pointed editorial in The Lancet earlier this month which called for public health approaches to e-cigarettes to be aligned with those targeting cigarettes, warning that the “renormalisation of smoking in the form of e-cigarettes, not only among smokers, but also among young people and never smokers, risks population-wide nicotine use and dependence on a massive scale.”

Manufacturers of e-cigarettes, and some public health advocates, have supported their use as a smoking cessation tool and a safer alternative to cigarettes. However, the evidence for both of these claims is weak.

No e-cigarettes have been tested or launched as smoking cessation products; all are sold directly to the consumer as tobacco, not medicinal, products. Three randomised trials of third-generation products show low rates of abstinence at 6 months. Data also suggest that smokers switch to e-cigarettes, then remain dependent long term.

The very high nicotine levels delivered by some e-cigarettes could make them more difficult to quit than cigarettes. Very few data on long-term health effects are available to support the safety claims.

The positioning of e-cigarettes as a viable cessation aid is vastly overstated, especially since the current first line treatment (nicotine replacement therapy under medical supervision) has a strong evidence base demonstrating safety and efficacy.”

The American Academy of Pediatrics recently warned US Congress about the particular risks of vaping to the developing adolescent brain. You can read their position statement here.

For a detailed account of how vaping was able to take hold in the United States, unchecked by regulators, this New York Times feature is worth a look.

As we continue to count the cost of decades lost to Big Tobacco, are we simply exchanging one deadly vice for another? Health journalist Cathy O’Leary shares her story in this piece for Croakey.

Apart from a few furtive experimental puffs as a young teenager, I never found any great attraction in smoking.

It was the late 1970s and health concerns about smoking were gaining some traction. But there was still a fair bit of resistance to the notion that cigarettes could really hurt, and certainly not enough to stop many of my school friends from dabbling.

At a Blue Light disco run by the local police in Melbourne, a few of us found the opportunity to sneak out and have a quick drag on the cigarettes we had bought by pooling together a few pennies.  It was hardly a big expense back then, so very affordable for teenagers of even limited financial means.

But for me, smoking was a very short-lived habit, and not because of the distant threat of getting lung cancer. It was more about the taste that cigarettes left behind in my mouth. I had the overwhelming desire to brush my teeth straight after smoking, and decided that sounded like too much hard work for not much return.

An added inconvenience was the fact that we had to keep prying parents from finding out about the said communal packet of cigarettes. We took turns hiding it at the back of drawers or wardrobes, until the pack became crumpled and the cigarettes were so squashed that we just couldn’t be bothered any more.

Age of the smoko

But at home I was smoking – well, passively – with my parents both long-time heavy smokers since their late teens: very common for their generation brought up in the NSW outback town of Broken Hill.

One of the local obstetricians in the town even encouraged pregnant women to smoke, telling them it meant they would have smaller babies that were easier to deliver. The same doctor was often seen moving between multiple cubicles examining expectant mothers, always with a cigarette hanging out of her mouth and spare ones burning in ashtrays in each cubicle.

My father was a miner, and smoko breaks were not called that for nothing. Few workers abstained from a habit that was as natural as breathing.

As they became young adults, all my siblings – an older and younger sister, and a younger brother – took up smoking, and it was not unusual to have a cloud of smoke hanging over the dining room table as everyone except me lit up after Mum’s home-cooked dinner.

I met my now-husband when he was 19,  a young printer who smoked a lot. He was very lean, with his weight kept in check by cigarettes in lieu of eating. At the time, many young women saw it as a good form of keeping off the pounds.

To be honest the constant smoke haze did not cause me great grief. It was so routine that I barely noticed it. Even when I had irritated eyes or tobacco-smelling clothes and hair it was something non-smokers like me just seemed to live with.

It was not until 30 years later, soon after our first child was born, that my husband finally quit smoking after numerous attempts. A baby in the house was the strongest incentive he had ever found.

Still, it took a long time to stop seeing the fall-out from his long-time habit. For the next 12 months or so, our bed would shake at night – not from anything recreational – but as the effects of going turkey on nicotine gave him withdrawal symptoms.

From the 1990s, the rest of my family – my parents, sisters and brothers – all eventually gave up smoking too – and it seemed we had dodged a bullet in terms of any long-term ill-effects.

But smoking does catch up. This year came the inevitable lung cancer diagnosis in my 83-year-old mother. It was caught early and the surgeon is hopeful, following an operation to remove a third of the upper right lobe of her lung.

However, after years working as a health journalist I know the prognosis for lung cancer is not great.

As I left the hospital after seeing her post-surgery, I saw a middle-aged man in the carpark stubbing out a cigarette as he prepared to visit someone, and later noticed a young woman vaping near a bus-stop.

The sight of those two people rattled me in equal degrees.

We are now seeing emerging research findings about the health risks from e-cigarettes and vaping, and there is probably a lot more to come.

Inhaling stuff into your lungs – whatever it is – can’t be good for you, it is that simple. And unlike when I was growing up, now we cannot blame it on ignorance.

Cathy O’Leary has been an award-winning health journalist in Perth for more than 30 years.

She won the Media Entertainment and Arts Alliance’s 2018 Clarion Award for the most outstanding contribution to journalism in Western Australia. Cathy is currently scientific writer at Ear Science Institute Australia.

PrevPreviousFamilies in focus: #CommunityControl success stories at RivMed
NextPractising what we preach on the climate crisis, at home and workNext