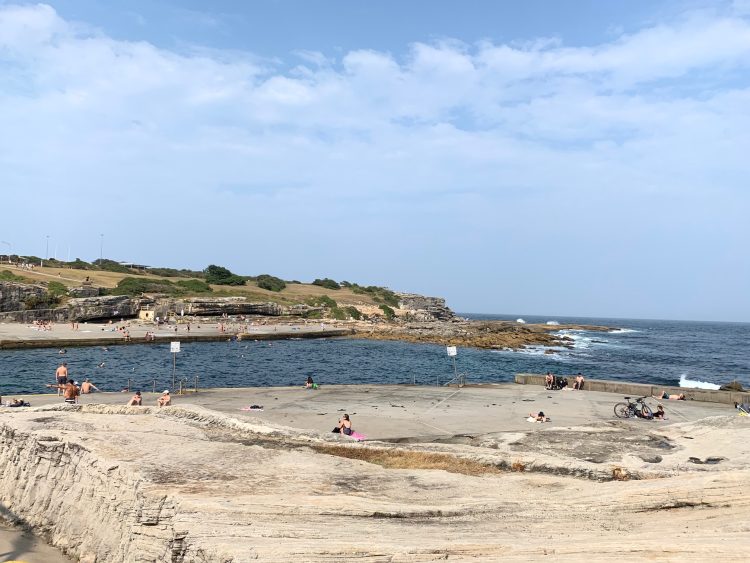 When we’re all at sea, what is it that sustains us?

What follows is a short perspective I wrote back in January, when all of us were dealing in our own ways with the shock and grief of Australia’s terrible bushfire season.

At the time and as a Sydneysider, I couldn’t have imagined a scenario where it would become impossible to drive across town and spend time in the ocean, but just two months later, with COVID-19 social distancing restrictions, it seems that is the case.

I find myself wondering, with our worlds changed for now – and for some, in much more challenging ways than my own – what is it that sustains us? Where do we find joy and, importantly, how can we share it?

Knowing that I now need to dig deeper, I offer my thoughts from January to anyone who is reflecting on this as you work or rest this Easter long weekend.

In the coming weeks, Croakey would love to hear about what is sustaining you through these pandemic times.

During the six formative years we lived on the NSW north coast, my sisters and I spent plenty of time in the water.

We all learned to swim the same way: by being thrown off a pontoon into a lagoon on the Nambucca River, my father jumping in after us and gliding alongside as we dog paddled in gleeful terror to safety.

Later he held our hands and gave single word instructions as we learned to negotiate the surf.

“Under” for a wave that was past its best,

“Over” for one that wasn’t ready,

“Dumper” for anything with a suspicious curve to its tip, and

“Now” for that rare, perfect wave that was just ready to carry us in to shore.

None of us became an excellent swimmer – we were too ill disciplined for that. We had no desire to perfect our breathing, swim in straight lines, train in squads or don bathing caps against the chlorine.

We were dolphins. We were mermaids. We choreographed our own water ballet. We lived to be submerged.

Years later, when water play became more difficult to schedule around prosaic concerns like work and kids, my older sister coined a phrase for that moment when you come up after the first dive.

That same son gave me a book this Christmas. A memoir translated from the French would not be my usual pick but I suspect he was drawn to the image of a woman resurfacing from a deep ocean free-dive on the front cover.

Memories of Low Tide, by Chantal Thomas turned out to be a wonderful elegy to the kind of aimless swimming I enjoy, but also a lesson in acceptance – acceptance of ourselves, our situations and of those we love. I devoured it in two days, and immediately felt the need for some underwater action of my own.

For me, this is perfected in snorkelling. At this time of year I’ve often been lucky enough to spend time face down with the fishes somewhere off the northern Australian coastline or around the pacific, but this Christmas period saw me based at home in Sydney.

Nobody’s summer has been normal this year. I wasn’t directly affected by bushfires but, like other Sydney-siders, I’d spent November and December choking down smoke, queasy and apprehensive with the dawning realisation that climate change was now, and our country was burning like never before.

On December 27, when my older sister arrived to support another family member who’d been admitted to hospital, I was relieved I’d stayed home. It was comforting for us both to be in each other’s company.

The following afternoon, briefly released from our duties at the hospital, we decided to go for a swim, choosing, along with thousands of other people, the narrow rock-form and concrete bay that is Clovelly Beach.

There, our fingers and toes numbed by the freezing water and buoyant in the salt we were dolphins again. We dived and drifted and floated in that half sitting position that is conducive to talking. We needed to be new women and we were. It was a gentle in-tide and the water was clear enough to see the mossy rocks and the swaying kelp far beneath us.

I noticed other people snorkelling, and vowed I would be back.

The next morning I dug out my gear and made the 30-minute drive over the Anzac Bridge and out to the coast. I squeezed into a tiny parking space above the bay, threw my towel on a rock, flippered-up and eased myself in.

I immediately remembered what it is that I love about snorkelling. It’s not just the fish, although there were plenty of them loitering in the seaweed and darting between the rocks – bream and stripeys, a small stingray and even one of the blue gropers that Clovelly is famed for. Nor is it necessarily the kind if display you see in the tropics – although there’s nothing wrong with coral gardens and turtles grazing on sea grass.

Location aside, the best thing about snorkelling is that it takes you somewhere else. The world below the water is a place where even the distant sounds of other swimmers are masked by the regular, stridorous sound of your own breathing.

Hovering above micro marine environments, skimming the rocks and sand in the shallows, staring into deep water, rising with the swell and drifting with the current, provides brief but complete respite from what is going on above, and is somehow deeply refreshing.

I started snorkelling every day, often in the company of a friend who is facing a major health challenge this year. We explored the area in various tides and weather conditions, too inexperienced to be sure as we peered into the bay, whether we’d find the water calm and clear, or rough and opaque with churned up sand.

On the days when the ocean had spewed tufts of kelp onto the platforms around the bay, we joined the children in the shallows to pull on our flippers and glide out from the shore like crocodiles into the murky water.

One calm morning at low tide, we ventured far out together, to the rocks at the end of the bay. There, with shoals of tiny fish swirling around us in the clearest conditions we’d seen, we watched as three blue gropers feasted on sea anenomes. We stayed a long time, both aware that a day like this might not be repeated.

My father’s swimming instructions extended, of course, to what to do in a rip. “Never swim directly against the current,” he told us. “Find a way to use it…swim with and across it.”

On the best days, as I let the swell lift me and feel the pull of the tide, I think about this advice.

How important it is to remember, that to swim safely in the ocean requires surrender as well as struggle.

Dr Ruth Armstrong is an editor at Croakey

If you would like to write for Croakey on what sustains you in difficult times, please contact us via info@croakey.org 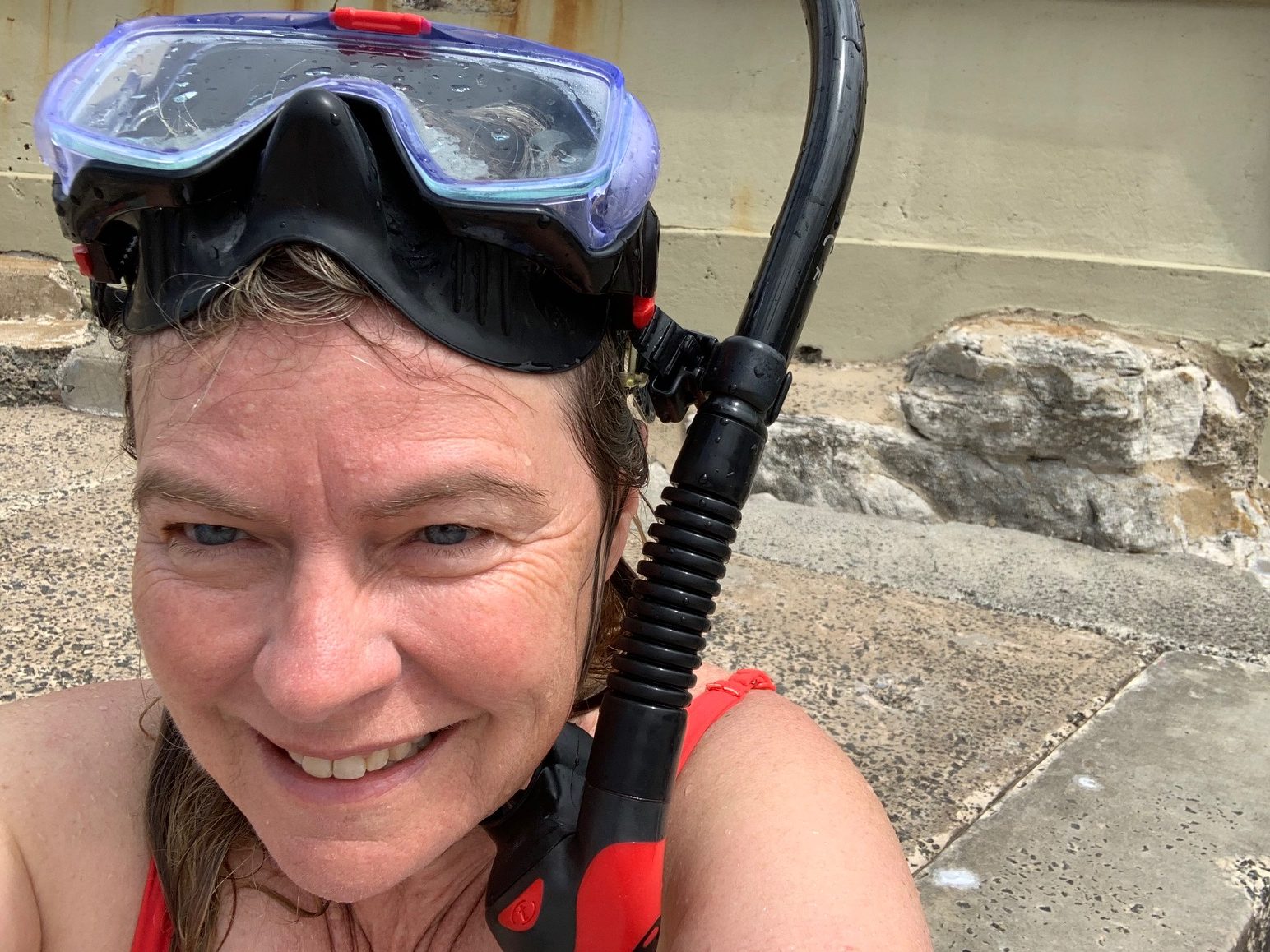