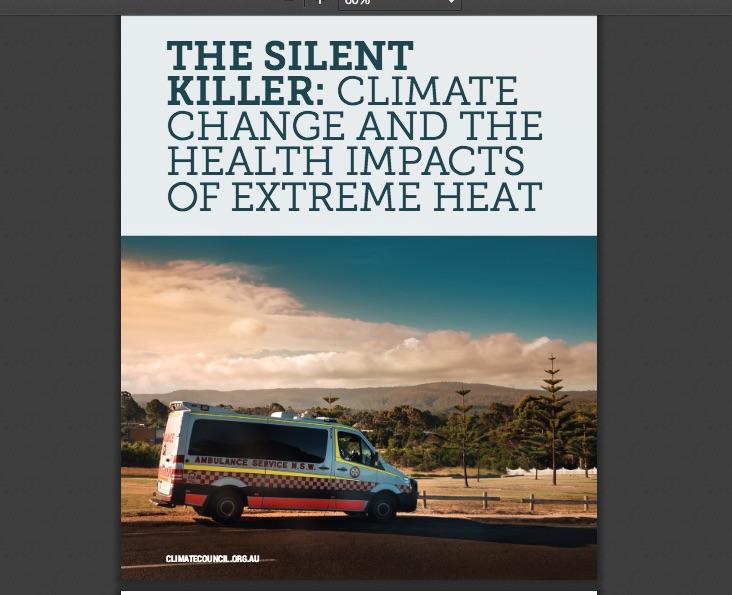 When will the Federal Health Department address “the defining issue for public health”?

(Update, 8 March: A response from the Federal Department of Health has been added).

Climate change is the defining issue for public health in the 21st century, according to the Director-General of the World Health Organization, Dr Margaret Chan.

In a keynote address at the Human Rights Council panel discussion on climate change and the right to health in Geneva last week, Chan said WHO would host a second global conference on health and climate this year, hopefully in July.

She also said the WHO and the UN Framework Convention on Climate Change would jointly roll out climate and health profiles for individual countries (this will be one to watch, given that we are attracting headlines in the New York Times like, “Australia turns its back on climate science”).

Chan also cited World Meteorological Organization data showing 2015 was the hottest year since records began in 1880, and experts’ estimates that by 2050, climate change will cause an additional 250,000 deaths each year just from malaria, diarrhoeal disease, heat stress, and under-nutrition. 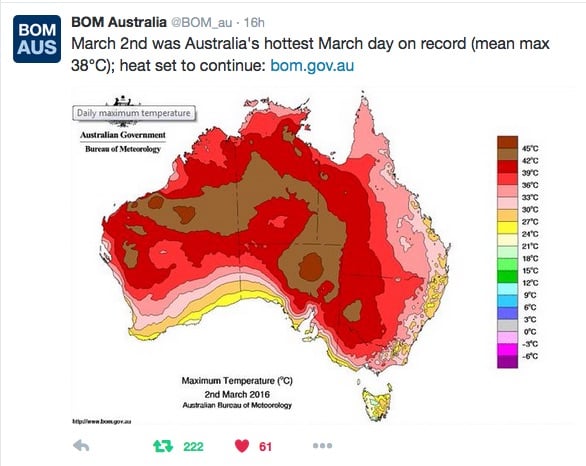 Meanwhile, last week also brought the release in Australia of the Climate Council’s report, The Silent Killer: Climate Change and the Health Impacts of Extreme Heat – which is very timely given the heatwave that parts of Australia are experiencing this week, not to mention in recent months.

The report says Australia must take urgent steps to improve the preparedness of the health sector and the long-term resilience of communities to minimise the impacts of worsening extreme heat.

It says that severe heatwaves, worsened by climate change, caused thousands of deaths worldwide throughout the year, particularly across large areas of western Asia and the Middle East.

The report notes that the United Nations released their first heatwave guidelines aimed at helping decision-makers and health services to develop early warning systems in an effort to reduce health impacts and deaths from heatwaves. 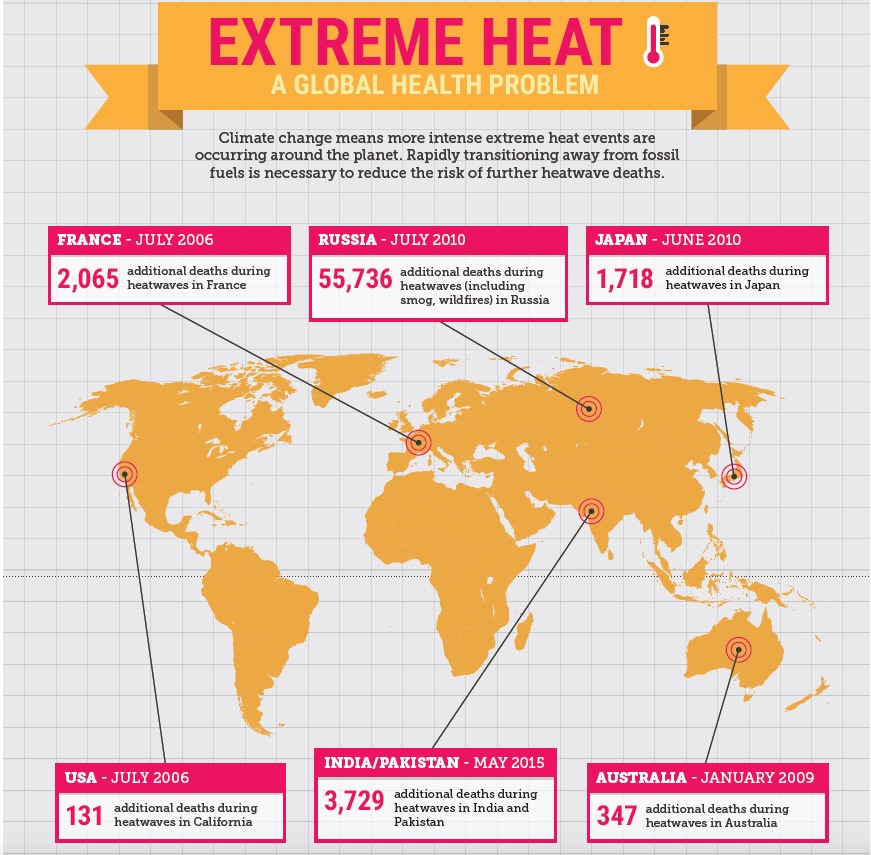 Speaking at the report’s launch, the AMA’s vice president Dr Stephen Parnis called for a National Strategy for Health and Climate Change to be developed. He also described his own experiences, as an emergency medicine specialist, in dealing with the health impacts of extreme heat:

In 2009, I was working in Melbourne during the January heatwave – three days above 43 degrees, and very high minimum temperatures being experienced overnight.

This is what happened:

Ambulance services were overwhelmed, and rates of cardiac arrest soared.

There was overcrowding in every Hospital and Emergency Department in the State, and it rapidly worsened as each day and night of the heatwave progressed.

Elective procedures were cancelled to free up precious hospital beds.

Usual discharge planning changed, and had to be predicated on whether patients could be released to a safe/cool environment. In fact, one of my hospitals was in an old building, and the cooling systems broke down, putting inpatients at immediate risk.

The elderly, the disabled, the homeless, and children were disproportionately affected.

Wildlife and pets suffered terribly, and led to a number of patients putting their own safety at risk by ignoring medical advice for their own health, and returning to their overheated homes.

Tragically, there were 374 more deaths than would be expected for the population of Victoria. And this, we believe, is a conservative estimate.

Why? Because in a heatwave, mortality and morbidity manifests itself in so many different ways.

It contributes to presentations as diverse as confusion, lethargy, falls, and the exacerbation of chronic illnesses such as heart, lung & renal disease.

Croakey therefore thought it timely to check what the Federal Department of Health is saying and doing about climate change and health, and particularly heatwaves.

The latest annual report isn’t helpful: a quick search of the index shows no entries for climate change or heatwaves.

It is so very telling, however, that there are multiple entries for private health insurance. 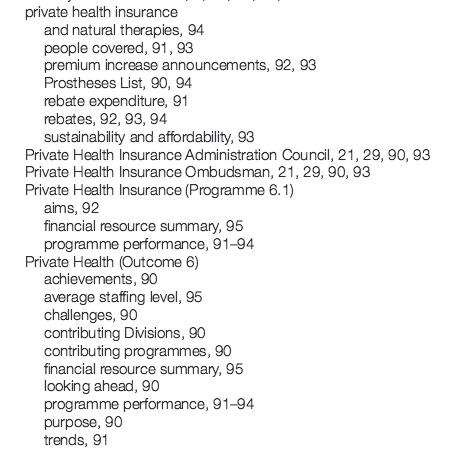 In the entire report, the only hit on “climate” is a reference to a former job of the Departmental Secretary Martin Bowles, who has previously been Deputy Secretary in the Department of Climate Change and Energy Efficiency.

So the Department’s latest annual report suggests “the defining issue for public health in the 21st century” isn’t worth a mention.

Never mind, surely the Department’s website will proclaim its work on climate change.  Surely the section listing publications, programs/initiatives and campaigns will have something on climate change, health and heatwaves? 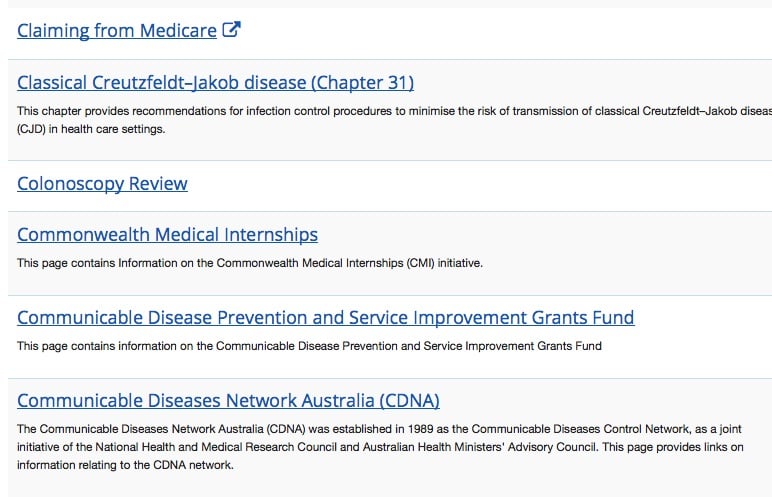 As this grab from the website suggests, we skip straight from publications on Classical Creutzfeldt-Jakob Disease to the Colonoscopy Review with nary a mention of “Climate”, and nor is there any entry for “Heatwaves” as we search between the Healthy Weight Website and Hepatitis C Prevention, Treatment and Care: Guidelines for Australian Custodial Settings.

We are writing to the Department to find out more. Stay tuned…

Response from a spokeswoman for the Federal Department of Health

Australia is in a good position to adapt to climate change and the health impacts of extreme heat.  We have high levels of education, access to technology and a strong public health system.

Australia’s Chief Medical Officer only last week attended the Climate Council’s summit on climate change and the impacts on human health, chaired by Professor Fiona Stanley, and he intends to raise the issues discussed there with the Australian Health Protection Principal Committee (representing all state and territory Chief Health Officers)

On 2 December 2015, the Australian Government released a National Climate Resilience and Adaptation Strategy. The Strategy sets out how Australia is managing climate risks for the benefit of the community, economy and environment. It identifies a set of principles to guide effective adaptation practice and resilience building, and outlines the Government’s vision for the future. The Strategy includes an entire chapter on health and climate change.

PrevPreviousWhose problem is it anyway? Transforming the public health narrative to stem the tide of “lifestyle drift”.
NextRecommended reading, viewing and listening on International Women’s DayNext