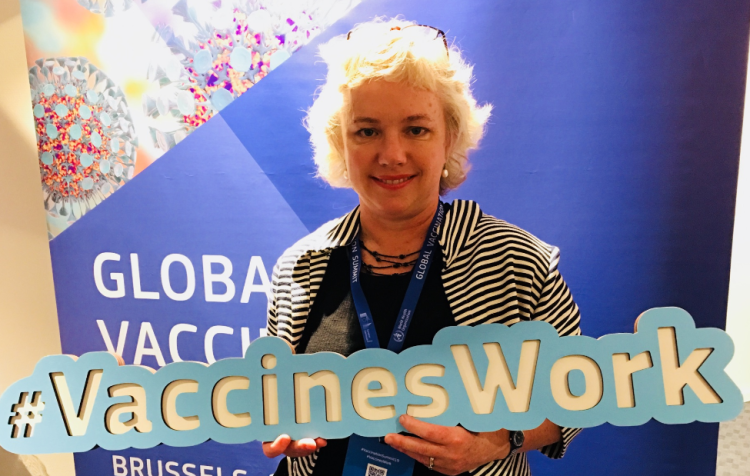 Vaccines work. So does asking the community. Julie Leask

“When you ask the community, magic happens”: a stocktake of public health in the pandemic

In a year that had exposed both the critical importance of and chronic underinvestment in public health, what lessons has the field offered as many parts of the world confront a resurgence of the novel coronavirus pandemic and anxiously awaited delivery of a vaccine?

This question was at the heart  of a timely and thoughtful address to the virtual Australian Public Health Conference this week by Professor Julie Leask, one of Australia’s leading thinkers on vaccine hesitancy, programs and policy, and a trusted voice during the COVID-19 crisis.

Leask delivered the conference’s annual Basil Hetzel Oration, reflecting on lessons from and for COVID from a career in the social science of immunisation and risk communication, offering valuable insights into what Australia had done well, its shortcomings, and strategies to maximise successful rollout – in uptake terms – for a COVID-19 vaccine.

“Public health has become everyone’s business,” said Leask of the sudden interest in, and fanfare around the discipline, with the public anointing a new generation of “rockstars” whose faces adorned tshirts and linen and attracted the kind of fan mail normally reserved for midwives and surgeons.

While the COVID-19 pandemic had, seemingly overnight, seen public health suddenly valued and in demand, it had also highlighted the impacts of “years and years” of neglect: “gaps in capacity, lack of trained personnel, lack of ready connections to consult with communities” and revealed entrenched deficit models (“it is the public who are wrong”) and top-down approaches  in – particularly initial – government responses. 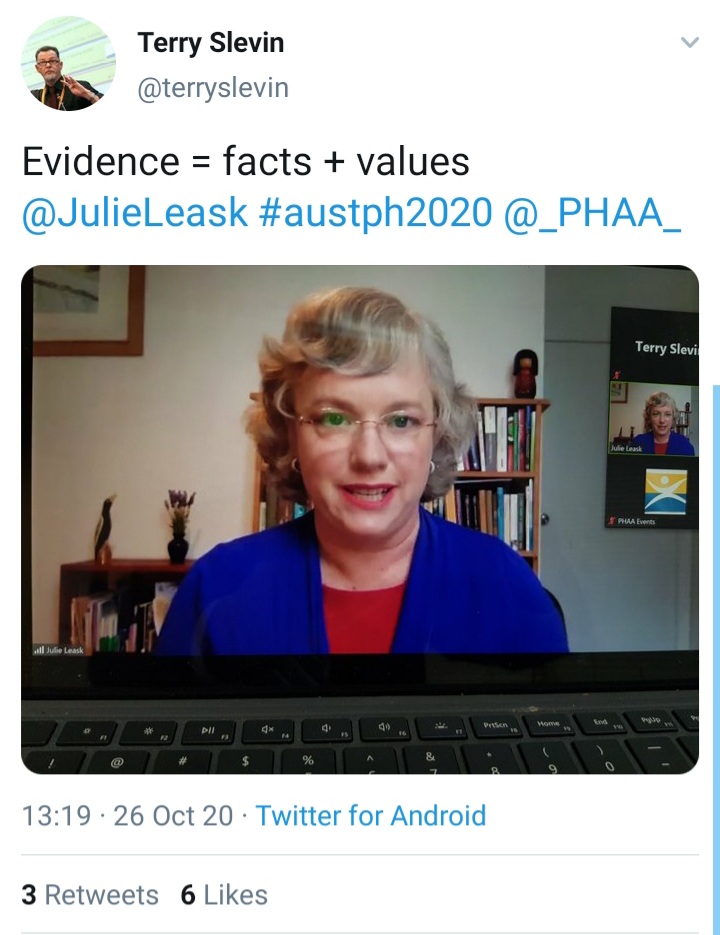 Early communications were “very one-way”, Leask told the conference, with frequent updates on what the government was doing in response but offering little for an anxious public who wanted to know what they, personally, could or should do.

“They over-reassured. They didn’t tell people what might be ahead and what they should do,” she said. “Authorities were making decisions on behalf of people that involved enormous tradeoffs, where they relied on their imagination to consider the impacts, not ask people what it would mean to them.”

The result? People looked at what was happening in Italy and did the only thing they could conceive of to prepare: they stockpiled groceries, Leask said.

NSW had decentralised public health units situated within their communities, some of whom had multicultural health units or were majority staffed by people with deep, lasting ties to local groups. She gave the example of the Tamworth office of the Hunter New England PHU, where nine of the 12 staff were Aboriginal.

Indeed, Leask said First Nations communities were some of the best prepared for COVID-19, drawing on lessons from the 2009 H1N1 pandemic to identify who was most at risk, what the key strategies and messages were, and acting swiftly and early to protect their people.

As a result, just 1% of COVID cases in NSW were among Aboriginal people, rates among those aged 70+ (the most vulnerable group) were less than half those seen in the general population, and testing rates were higher. Australia-wide, Aboriginal and Torres Strait Islander people made up just 0.5% of COVID-19 cases.

In contrast to the NSW response, Leask said Victoria had some challenges, including greater centralisation of its public health functions, and gaps in its engagement with marginalised communities.

“They learnt early in the second wave that communication with multicultural communities was inadequate, and they had to rapidly form those connections, sometimes in a context of mistrust,” she said.

Asked to nominate what she thought had been the highlights and shortcomings of Australia’s COVID-19 response, Leask nominated the handling of the schools issue as a real lowlight, where communication was poor, parents and teachers were left uncertain and afraid, and closures were ordered “for marginal benefit and massive detriment”.

The concordance, by and large, between the advice of the public health experts and actions by governments, had been a high point, she said, noting that Prime Minister Scott Morrison “must have learned from the bushfires”.

Great leaders and communicators had also emerged at every level of the response, Leask said, singling out Victoria’s chief health officer Brett Sutton as a standout in this respect.

Information alone is not enough

For Leask, the pandemic had shown that – while science was of course critical – in a global public health emergency, success was all about communication, engagement, and understanding that, fundamentally, the outbreak and its control were driven by human behaviour.

She shared some of her experiences in vaccine research to highlight principles of a good public health response, including “the importance of understanding people’s action in context, about upstream factors, about the need to ask (the public) for their perspectives, and engage with them in planning”. 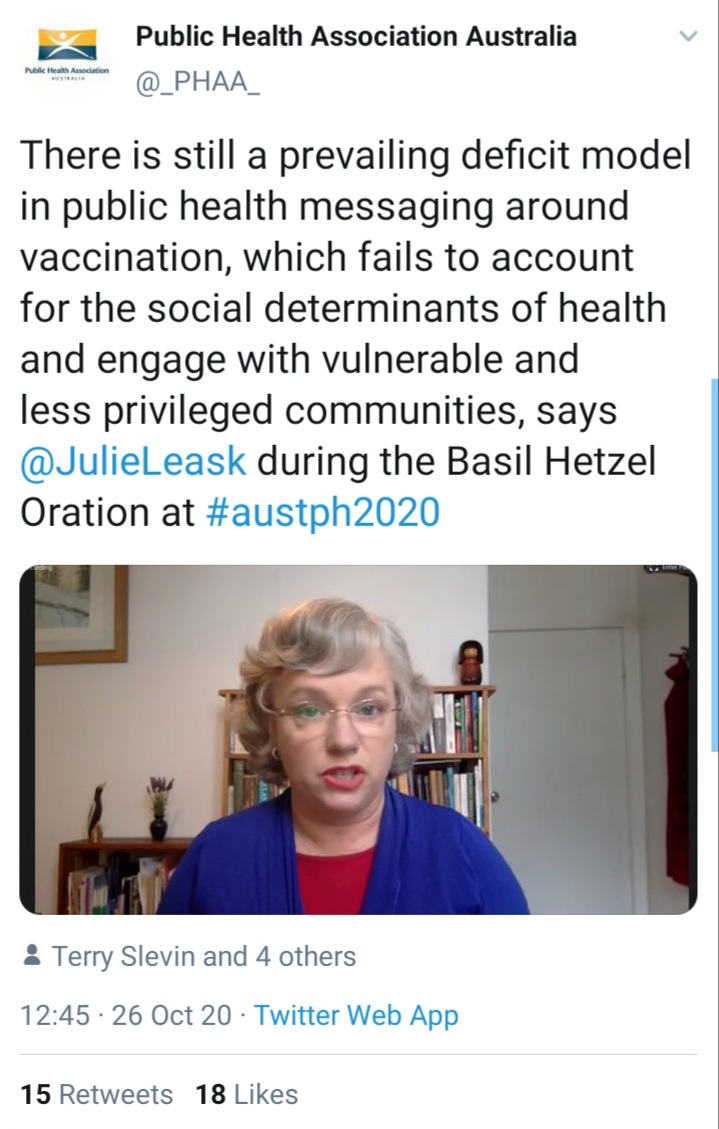 Despite decades of social sciences research demonstrating that you couldn’t change minds with facts alone, Leask said “in 2020 we are still confronting that deficit model”, ignoring practical and logistical barriers such as poverty and social exclusion, access to healthcare and systems failures.

In the US, she gave figures from one study showing that immunisation rates were much lower for children in families without private insurance (73.2 per cent) than those who did (93.7 per cent).

In vaccines research, she said upstream factors were often revealed as a key barrier to uptake.

It will be important to consider these in the rollout of a COVID vaccine, taking in issues such as out-of-pocket costs, how and where people could access the inoculation (home visits and drop in clinics), and how to best deliver messages that normalised vaccination to various groups, she said.

Communications alone had a marginal effect at best on vaccine uptake and needed to be part of comprehensive strategy.

How discussions around vaccine hesitancy were conducted mattered and could be the difference between someone shifting to acceptance or refusal, she said.

Leask urged health professionals to resist the “righting reflex”, and instead take a comprehensive concerns history when a fear about vaccination was raised, urging someone to share all their worries rather than shutting down the first one that was expressed.

“Hear all concerns to saturation. Once you know these things, the conversation is going to be more effective,” she said.

Disinformation was a part of the issue, Leask acknowledged, but she said it was only important if it impacted behaviour.

It was best countered using trusted people or organisations, using messages that anticipated and prepared people for untruths – “you may hear X but the truth is actually Y” – and was more effectively tackled with early and factual communication.

Leask advocated involving the community in discussions around allocation and rollout of the coronavirus vaccine because the deliberation was not just a matter of efficacy, modelling and mechanism, but involved a debate around values.

“A greater sense of public ownership of these decisions may avert controversies around them,” she said.

Until then, Leask said it was “human behaviour that will keep this pandemic controlled. Even taking a test or a vaccine is a behaviour. At a collective level, it’s humans acting within systems.”

“When you ask the community, magic happens,” Leask said. 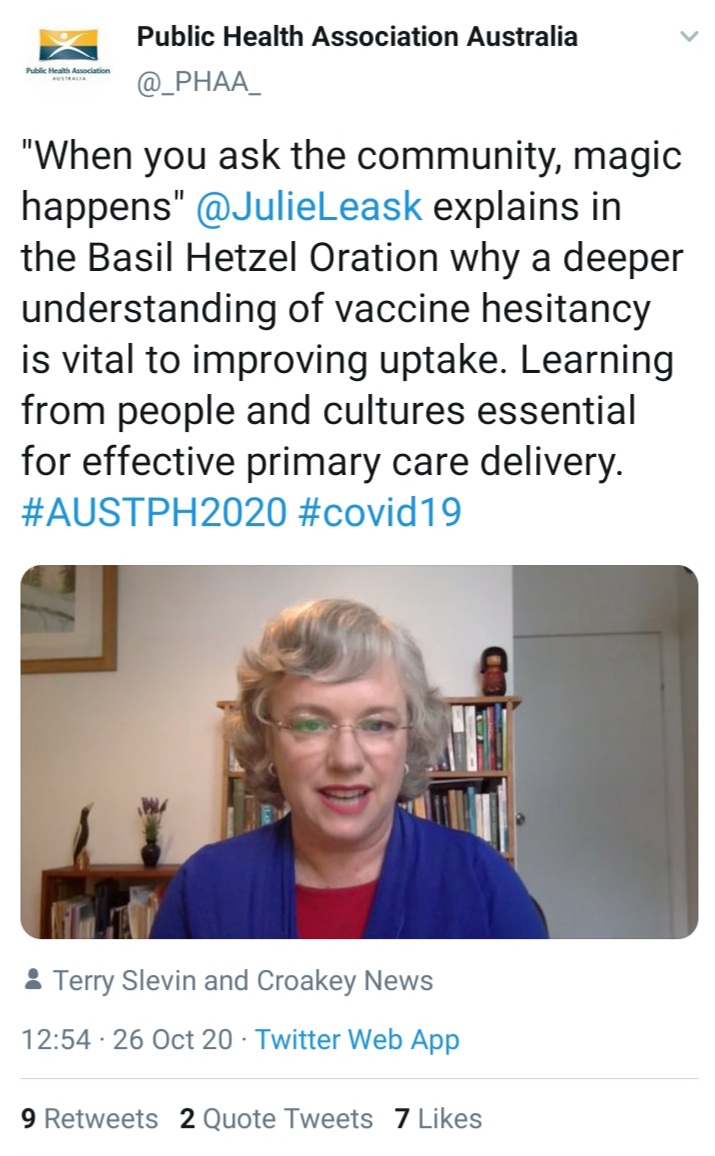 PrevPreviousAs COVID explodes in the United States, join us on 4 November to track critical election results
NextDangerous and unjust to lock out Don Dale children from MedicareNext