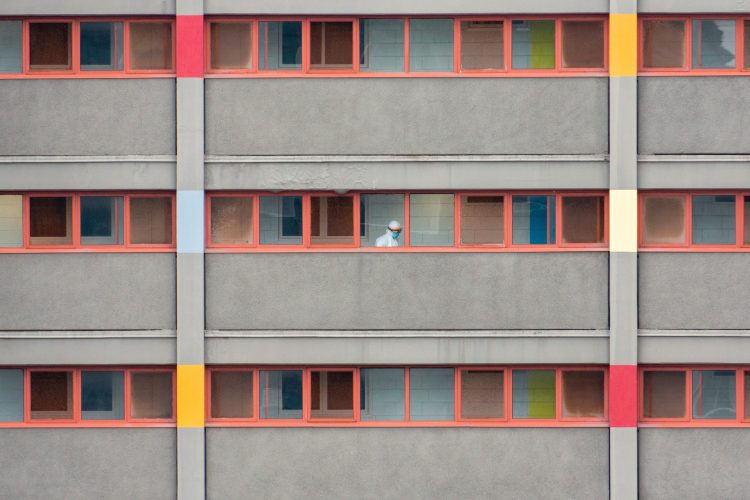 Where did Victoria go so wrong with contact tracing and have they fixed it?

Introduction by Amy Coopes: There is mounting concern about the novel coronavirus in New South Wales, with the state experiencing a slow uptick in cases and community transmission that has seen it outpace Victoria for the first time in some months.

There were 14 new cases of COVID-19 in NSW on Wednesday, 11 of which were locally acquired, compared with seven in Victoria, where an outbreak of the virus in the regional town of Shepparton linked to a known cluster in Chadstone and Kilmore was worrying authorities.

Locals in Shepparton, which has a large Aboriginal and Torres Strait Islander population, queued for several hours to get swabbed, with demand so high there were reports that the town had run out of tests.

These flares highlight the ongoing challenges of COVID control, and how important it is to identify and draw on strategies that have seen success.

Not-for-profit community health organisation cohealth has been on the frontlines of Melbourne’s COVID-19 response, and CEO Nicole Bartholomeusz presented some of the lessons from the city’s closely-watched second wave at an Australian Healthcare and Hospitals Association event this week.

Bartholomeusz said community-led, place-based approaches had been critical in turning around transmission in previous hotspots, with bicultural workers and specially trained community health leaders key to the cohealth effort.

Bartholomeusz and her colleagues presented their COVID+ Pathways Pilot, a comprehensive place-based program for communities in Melbourne’s north and west encompassing education, early intervention, health care and case management and referral. The model drew on experiences early in the outbreak in Melbourne’s public housing towers.

“We learnt a lot during the public housing lockdown,” she said.

“Due to the high numbers of people with COVID in the flats who had to stay isolated, our teams of doctors and nurses on the ground developed pathways of care into hospitals, and processes to determine when to escalate an individual’s care based on an assessment of risk.”

Not only did this free up and keep in reserve hospital capacity for the acutely ill, she said it enabled responses to be tailored to individual needs.

A purely regulatory response of laws and fines is never going to work. Regulatory responses must be complemented by isolation supports to ensure people can isolate safely and not transmit the disease. Our COVID+ Pathways pilot assesses an individual’s capacity to self-isolate and puts supports in place to help them to comply with health directions to stay at home.

Care needs to reach out and be proactive. Many health directions haven’t taken full consideration of the fact that people may be living in overcrowded homes, may have mental health issues, may not speak English, or perhaps are not literate in any language.” 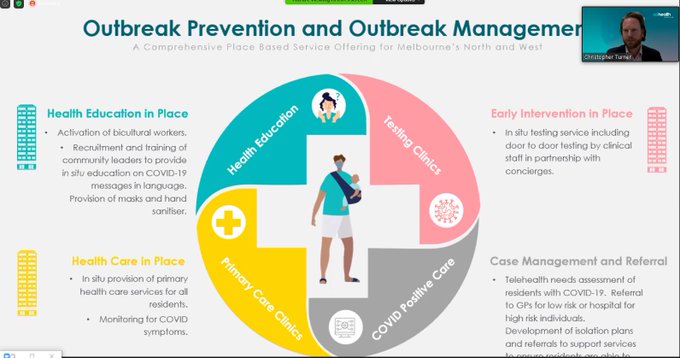 As a testament to the success of the program, which we will bring you a longer piece on next week, Bartholomeusz said the entire north and west metropolitan region of Melbourne had a day without a single new case for the first time last week since lockdown began.

“This is real cause for celebration given that in early July, 10 suburbs across these LGAs were put into hard lockdown,” she said.

“To have gone from 10 hotspot postcodes in lockdown across the north and west to last week having zero new cases on one day in that region is remarkable.”

“The success of the pilot shows the benefit of a whole-of-sector response, with agreed roles for GPs, community health and hospitals. Clinician-led pathways have been key and cohealth clinicians led that work as the intermediary between GPs/PHN and hospitals.” 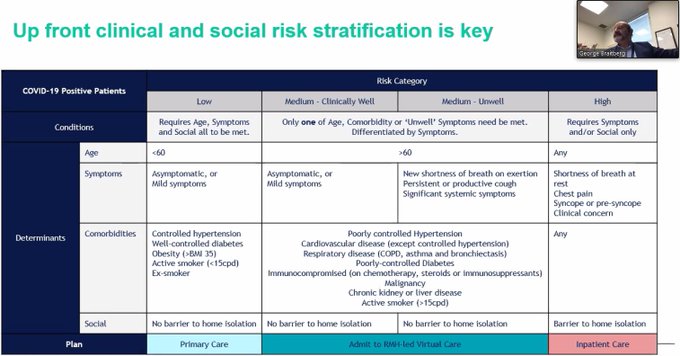 You can read a nine-page Twitter summary of the presentation here.

The success of what Bartholomeusz describes as “decentralised, place-based, localised responses, leveraging relationships that we already have with people in the community” has been highlighted as a defining feature of the comparatively successful NSW response to COVID-19.

In this piece for The Conversation, epidemiologist Catherine Bennett takes a closer look at the foundations for a successful COVID-19 response strategy.

Victoria’s contact tracing system has faced criticism in the past for being inefficient, with officials flying to NSW in September to learn from that state.

Comparisons are difficult in a pandemic because each outbreak has its own unique characteristics. That said, there are some key features that underpin the differing responses of NSW and Victoria when it comes to contact tracing.

Fundamentally, NSW’s system of decentralised local area health districts meant when the second wave hit, that state was able to draw on teams embedded in their local communities to manage contact tracing. These teams worked independently but also in concert under the mothership of NSW Health.

In Victoria, a legacy of cuts left the Department of Health and Human Services under-resourced and highly centralised, meaning there was a smaller base upon which to build the surge contact tracing capacity (with some contact tracers coming from interstate).

This was further challenged with the rapid rise in daily new cases, from 65 to 288 in one week alone in July. Systems had to be developed quickly to manage large quantities of data and feed it back to a central hub. The state had to “build the aeroplane while flying”.

Much has changed since then, and for the better. Some hard lessons have been learned along the way but the contact tracing system in Victoria is now very comprehensive and increasingly robust.

Community engagement and local knowledge might seem like buzzwords but in a pandemic, they’re vital to ring-fencing a cluster.

NSW’s system of devolved public health units and teams meant when local outbreaks occurred, locally embedded health workers were at an advantage. They’re already linked with local area health providers for testing, they already have relationships with community members and community leaders, and they know the physical layout of the area.

If you’re doing a contact tracing interview with someone and they’re talking about a key landmark at a certain time of day, you can visualise it and understand what it means in terms of risk.

What’s crucial is a nuanced understanding of local, social, and cultural factors that may facilitate spread or affect how people understand self-isolation and what’s being asked of them. It can also make a critical difference in encouraging people to come forward for testing.

It’s not just about making sure you have materials printed in the right language. It’s about understanding how people view the health system from their context. If you have people who come from a part of the world with a health system that operates differently to ours, they will bring that understanding with them.

If local health workers and contact tracers are already part of a community, they can bring that expert knowledge into the mix; they can make sure public health messaging is meaningful for local communities.

When NSW’s second wave came with the cases at the Crossroads Hotel, they were on high alert, with a system ready to jump on it and chase down every lead.

Victoria had to build its contact tracing capacity on the hop. That local knowledge had to be developed and integrated as they went, often when dealing with large and complex local clusters.

Since August, the Australian Department of Health has published the Common Operating Picture, which provides a weekly traffic light report of the coronavirus situation across Australia.

In the earlier part of the second wave, you can see Victoria gets an amber or red light for some elements relating to case notifications and outstanding case interviews — in other words, its system was under stress. That’s understandable; when an outbreak gets to a certain size, strain is inevitable.

It has been impressive to see Victoria’s more recent progression to green, meaning the system is coping well.

It’s incredibly resource- and labour-intensive, but it’s also a game-changer that will allow outbreaks to be contained quickly. Hopefully, this will be the standard approach state-wide where the circumstances permit and, combined with good cooperation from the public in getting tested early, it’s likely to be very effective.

Victoria has also got better over time at naming exposure sites clearly (in earlier days it could be quite vague).

You can see the evolution of the system happening. What’s admirable in Victoria is they did set about rebuilding their response, including creating regional hubs, while case numbers were high.

I have faith in the design of Victoria’s contact tracing system now, and Kilmore is showing us how it can be rolled out to good effect. Half the latest batch of contact tests results came back on Tuesday, all negative.

There will always be room for improvement and we will learn as we go.

Key to the system working is people cooperating with masks, hygiene and personal distancing, along with broader critical rules limiting home visits and not leaving home if unwell.

Most important is getting tested early, whether you have symptoms or have been at a known exposure site, do it and do it fast. This is how we limit the risk of spread, and reduce the risk families and immediate close contacts will even need to be isolated, much less deal with being infected.

People on the frontline are working incredibly hard within a system being rebuilt around them. They are engaging with people in the community who are frustrated and getting mixed messages.

It pays for all of us to remember the effectiveness of our public health system and Victoria’s public health response is down to the sum of people’s contributions. We all have a role to play.