Where is the leadership on health research and climate change?

Alarm bells are ringing right around the world on climate change (see some of the most recent examples at the bottom of this post).

But does the health and medical research sector have its thumbs jammed firmly in its ears?

In the article below, Dr Elizabeth Haworth, Dr Brad Farrant and Fiona Armstrong lament a lack of leadership from the research community on this pressing global public health concern.

The report of the Strategic Review of Health and Medical Research, set up by the Australian Government in 2011 and chaired by Simon McKeon, was released last month, recommending a 10-year strategic plan for the nation.

Despite criticism of the preliminary consultation paper for overlooking the health impacts of climate change, the final report has made minimal mention of these threats to health.

This stands in stark contrast to the 2011 Australian Government Climate Commission report, The Critical Decade: Climate Change and Health.  This report points to increasing frequency and severity of heat waves and other extreme weather events, more infectious and vector-borne diseases and more disease and premature deaths due to air pollutants. It reveals our health services are inadequately prepared for this change and that evidence-based action is urgent.

Ever-increasing scientific evidence and the long-standing consensus of over 97% of climate scientists, the CSIRO, the Australian Academy of Science and every major national scientific body in the industrialised world agree that the planet is warming, that the observed climate change is mostly caused by humans and that business as usual will result in irreversible changes to the climate system.

Worldwide, with less than one degree of the global mean temperature rise, health is already threatened.

The DARA report 2012, commissioned by 20 governments on the human and economic costs of climate change showed that climate change is already a direct cause of 400,000 deaths globally each year, along with 4.5 million deaths annually attributable to urban air pollution and other environmental hazards associated with carbon-intensive economies. The cost of harm from climate change to the world in 2010 alone was $US 1.2 trillion and this is predicted to double by 2030.

Unabated emissions are predicted to deliver an unprecedented four degree global average temperature rise over the next few decades, much faster than previously believed. The Australian summer 2012-13 was declared the hottest on record.

Successful human adaptation to such warming is uncertain.

A recent report from Price Waterhouse Coopers on the rate of decarbonisation required to limit the earth’s mean temperature rise to two degrees found that this would require a sixfold improvement in the current rate of renewable energy uptake and fossil fuel reduction by lowering industrial emissions, effective carbon capture and storage, and stopping deforestation. There are no policies in place in Australia to deliver anything near the required response.

Other countries have innovative approaches to address the health effects of climate change. One good example is the call for pilot projects from the Public Health Institute, to develop models that can be held up, scaled up, and replicated that simultaneously address climate change, community health and health equity. A private Californian investor is funding this initiative.

Unfortunately, in Australia, governments are cutting their climate policies and programs. The federal government has scrapped the contracts for closure program aimed at shutting down some of Australia’s dirtiest coal-fired power plants and is likely to abolish our only intergovernmental body on climate change at COAG.

It acknowledged the need for research into new and emerging health threats from infectious diseases, environmental hazards and changes in the human environment, which may be associated with climate change.

However, it seems to expect the research community to spontaneously take these on to collaborate nationally and internationally and overlap with other chronic disease and mental health research and social determinants of health.

Climate change does and will affect everyone, although its effects may not be recognised on a wide scale until they become devastating.

If the research community, like the Strategic Review of Health and Medical Research, fails to prioritise climate change, the health impacts are likely to overwhelm our health services and research community and we will fail to mitigate because we misunderstand the human threat.

Even when health aspects of climate change were a priority, funding of relevant research by the National Health and Medical Research Council in 2010-12 was only 4% of its total budget.

According to a 2013 study by the Australian Council of Social Service, community services are unable to cope with the demands associated with extreme weather. Increased demand from such events is likely to cause many to collapse.

Despite growing awareness among many Australians about the links between climate change and extreme weather events, there remains a lack of understanding of the scope and scale of implications for human health, health services, the economy and our society.

The Climate and Health Alliance (CAHA) warns that health is and will continue to be harmed primarily by lack of mitigation, but is at risk from a lack of investment in research and preparation of health services to promote the health benefits of and to reduce adverse health effects of climate change.

It recommends that such research should be part of a collaborative global health improvement program in line with the roadmap for applied research in The Lancet in 2009 and the Australian National Adaptation Research Plan – Human Health of the National Climate Change Research Facility.

Given the continuing health threats from climate change, is it reasonable that this national review, tasked with recommending a 10-year strategic plan for the nation, should fail to nominate one of the biggest threats to health as a research priority?

Without support from government and health policy makers, the means must be found to ensure continuing research to limit harm from climate change.

Where will this leadership come from?

In the face of policy paralysis and a lack of political leadership, civil society must step into the policy vacuum to help determine our national direction. But if these calls are not heeded, what then?

Without earmarked funding, this will be a tough call. Research will have to be integrated into other public health programs and researchers will have to spend a disproportionate amount of time chasing money.

Is this really the intended outcome of the McKeon review?

• Elizabeth Haworth is Senior Clinical Lecturer in Public Health at the University of Oxford and consultant public health physician, now based in Tasmania.

Brad Farrant is a post-doctoral researcher at the Telethon Institute for Child Health Research. He is interested in how ecological factors like biodiversity loss, population growth, peak water and climate change will interact to affect children’s development now and in the future.

Fiona Armstrong is a health and climate policy and communications professional and Convenor of the Climate and Health Alliance.

• The Guardian reports predictions by Lord Stern that hundreds of millions of people will be displaced from their homelands in the near future as a result of global warming. His warning follows recent news that concentrations of carbon dioxide in our atmosphere had reached a level of 400 parts per million (ppm), as reported here by The Economist.

“The land, oceans and biosphere are now in extreme danger, but it doesn’t seem to be driving the global community to the urgent measures required for a meaningful attempt to arrest the current trend. With few exceptions, the accelerating rate of atmospheric CO2 hardly rates a mention on the pages of the global media, preoccupied as it is with short-term economic forecast, daily exchange rates, share market fluctuations and sports results.

In Australia the language has changed from “the greatest moral issue of our generation” to controversy over a “carbon tax”, diverting the public attention from the climate to a hip-pocket nerve. While we debate the ways to bring about a meaningless 5% reduction in local emissions, we simultaneously develop infrastructure to export hundreds of millions of tons of coal. It all ends up in the same atmosphere…” 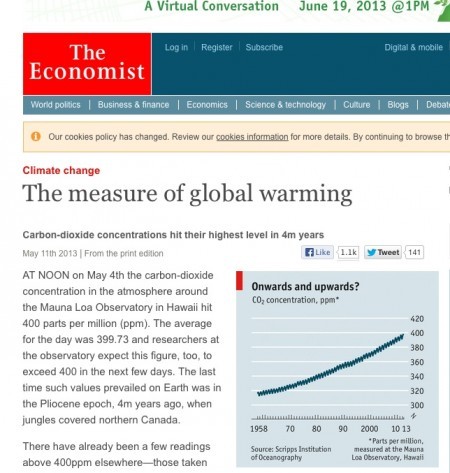 PrevPreviousIf the Feds wanted to use the Budget to improve population health….. (some out-of-the-box ideas)
NextNew review on chemical residues backs breastfeedingNext