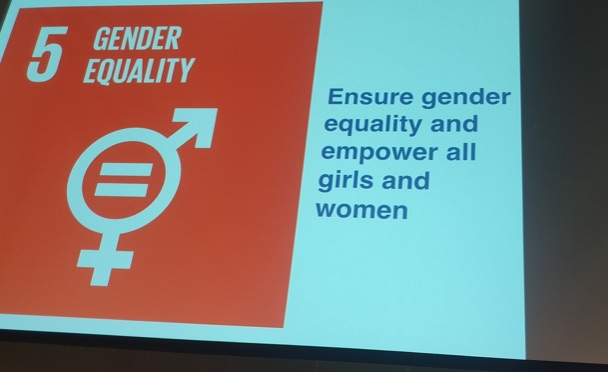 Where is the political will to save hundreds of thousands of women’s lives?

Some 300,000 women will die across the globe this year as a result of pregnancy and one-quarter of them will be adolescent girls, according to a leading obstetrician-gynaecologist from the United Kingdom.

Professor Lesley Regan, president of the Royal College of Obstetricians and Gynaecologists, said a staggering 90 percent of these deaths were preventable – with political will to address concerns such as unplanned pregnancy and unsafe abortion.

In a keynote address to the recent annual scientific meeting of the Royal Australian and New Zealand College of Obstetricians and Gynaecologists (RANZCOG), Regan made an impassioned case for her trans-Tasman colleagues to step up their political advocacy and shift their focus to preventing maternal deaths through contraception and safe abortion.

Regan, who is only the second-ever female president of RCOG and the first in 64 years, presented a stark picture of maternal mortality and the “elephants in the room” – contraception and abortion – in an address to RANZCOG delegates about progress towards sustainable development goal (SDG) 5.

One of 17 goals for global development over the next decade, which also includes taking urgent action to combat climate change and its impacts, SDG 5 commits countries to achieving gender equality and empowering all women and girls, something Regan described as an “enormous task”.

Regan drew parallels with climate change, which was glaringly absent from the RANZCOG program despite evidence it will deepen gender-based health disparities, including access to sexual and reproductive health care.

Regan said action on climate change was just as important to women’s health and to society as abortion and contraceptive care, but the former was a problem on such an immense and complex scale that it invited a sense of helplessness.

“Whether we are talking about the importance of contraception and abortion care in underpinning women’s health and underpinning society — and so too does climate change and what we’ve effectively dumped on the next generation…  I think so many times we are paralysed by these big discussions, and we think ‘what can I do about it, I’m too little to do anything on my own’,” she told Croakey in an interview after her address.

“My message today to that audience was if everybody in this room did one thing this week to improve gender equity, we would really change the world.”

While not the sole or definitive indicator of progress on this front, Regan said maternal mortality was a useful proxy for both the status of women globally, and of political commitment to the challenge.

The data was troubling, with 90 percent of the 300,000 maternal deaths that occurred across the world every year attributable to causes for which Regan said there were “cheap, heat tolerant interventions or drugs that could actually change those statistics”.

These included unsafe abortion, which accounted for 15 percent of all deaths and claimed the lives of eight women every hour, sepsis (16%), pre-eclampsia/eclampsia (13%) and haemorrhage (28%).

“We have to ask ourselves why it is that 90 percent of all maternal mortalities in the 21st century are potentially preventable,” Regan said in her address. “It’s because the societies in which they live have not yet decided that their lives are worth saving.”

While the lifetime risk of maternal mortality was about 1 in 7,000 globally, Regan demonstrated stark differences from country to country.

In highly developed Sweden, the best place in the world to have a baby, it was 1 in 17,400, rocketing to 1 in 22 for sub-Saharan Africa and a staggering 1 in 8 for women in Chad.

“In Chad if you’re a girl you’ve got more chance of dying because somebody got you pregnant than you have of finishing your secondary school, and I think in the 21st century that’s a pretty shocking statistic,” Regan said.

Every maternal death was a tragedy in and of itself, but Regan said maternal deaths were just the tip of the iceberg, with an estimated 30 women experiencing life-changing morbidity as a result of their pregnancy for every woman who died.

Maternal death and disability also had significant flow-on effects for families and communities, she said.

“If your mother died while giving birth to your sister or your brother, the chances of you getting to school, being vaccinated, having clean water, being educated properly would start to fall dramatically,” she said.

The “vast majority’ of maternal deaths were among the estimated 225 million women worldwide who had no access to family planning, she said, calling for her colleagues to shift their focus upstream from “firefighting” in the birthing suite to preventing maternal deaths through contraception and safe abortion.

Regan said there were 75 million unplanned pregnancies and 22 million unsafe abortions across the globe every year.

Read more on the abortion discussions at #RANZCOG19 here.

“I think it’s absolutely crucial,” she later told Croakey. “We’ve got to advocate for women and women’s health, because in so many parts of my own country and around the world, some of the most disadvantaged girls and women have got no voice of their own.”

She shared some examples showing how political conditions directly influenced the health of women, offering insights from Si Lanka, India and Syria, where she said 65 percent of medical emergencies were obstetrics and gynaecology cases.

Ever the “incurable optimist”, Regan said she believed the world could meet SDG 5 by 2030, but it was essential to step up progress, particularly for her specialty.

“But O&G professionals have this most unique position where, if they harness their expertise and their advocacy skills, they can have a real impact on girls and women throughout their life course.”

Regan shared this powerful video to conclude her talk: No Point Going Halfway.

See this 12-page Twitter summary of her presentation, as well as this Twitter thread by Dr Bec Szabo. 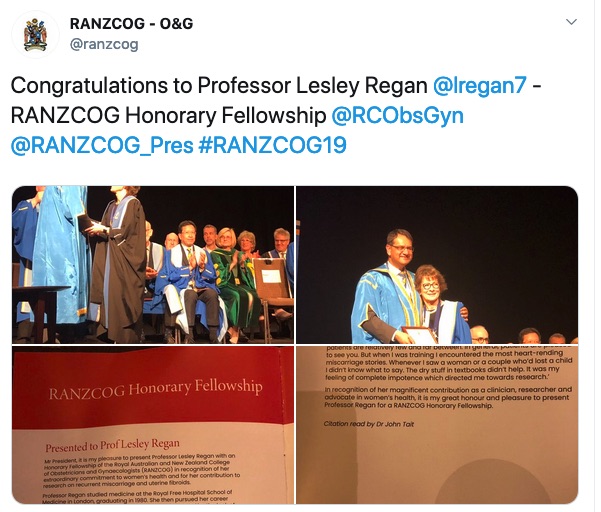 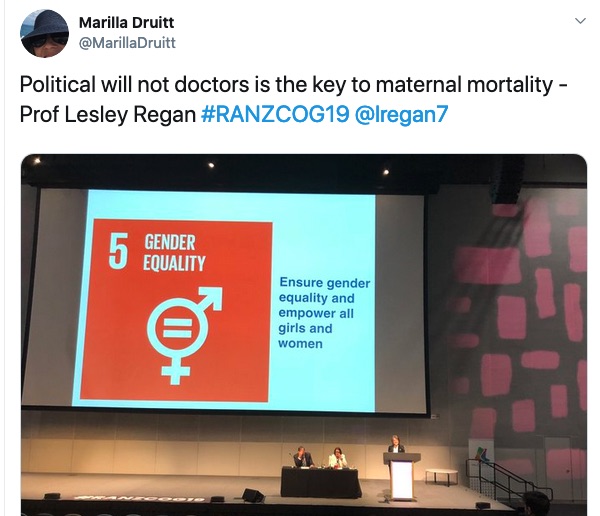 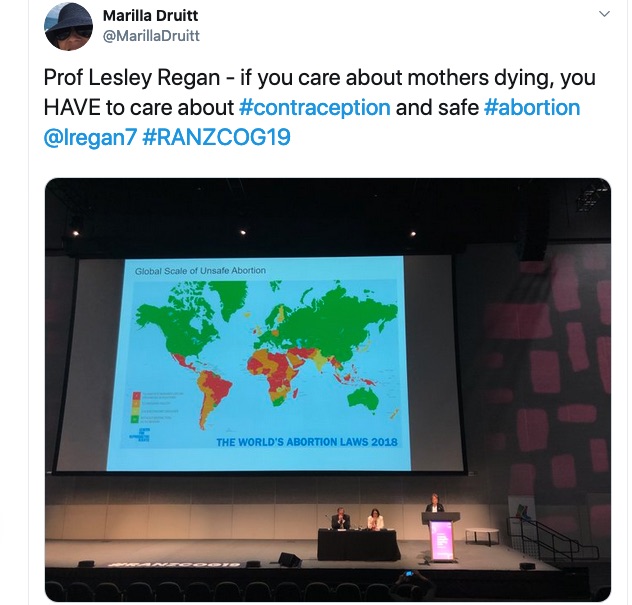 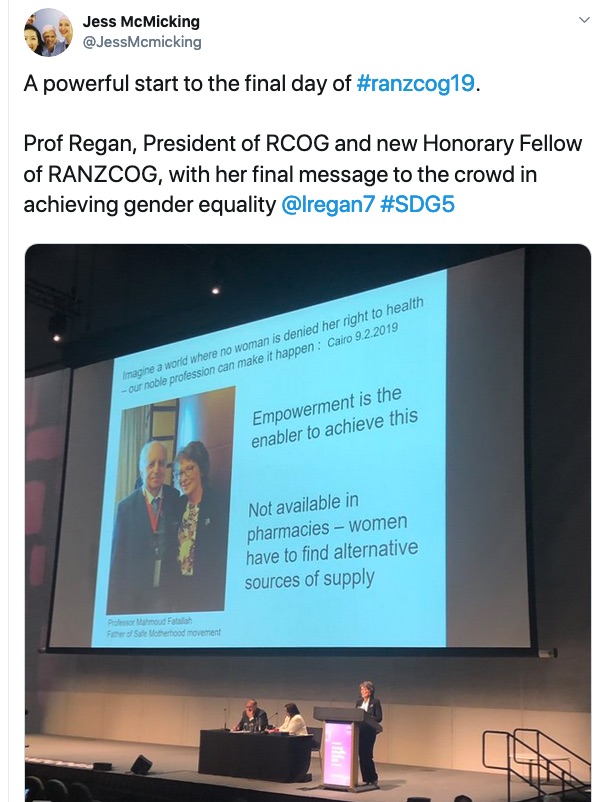 Watch our interview with Regan

(with the memorable quote that “opportunities don’t make appointments, you just have to grab them”.) 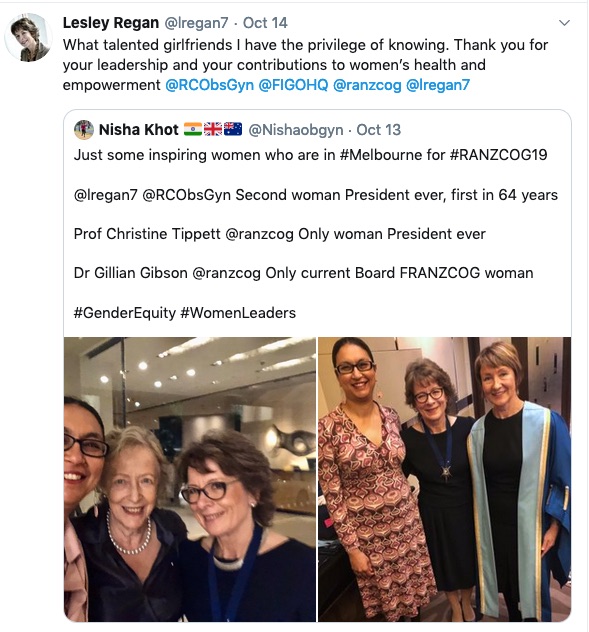 This story is the latest in our #RANZCOG19 series from Amy Coopes, who attended the 2019 RANZCOG ASM in Melbourne for the Croakey Conference News Service. Bookmark this link for the rest of our stories.